For his female fans, who doesn’t want a kiss from Jared Keeso?

This hunk from Canada is another wonderful reason to utter the phrase “more than meets the eye.”

He acts, he makes people laugh, he writes, and he produces top-rated shows and once in a while he also bags awards and he . . . is a hunk.

At 38, Jared Keeso looks every bit of those gorgeous celebrities whom people adore from afar.

Find out how this movie extra, to borrow the words of American poet Ralph Waldo Emerson (1803-1882), hitched his wagon to a star.

When Jared Keeso was born, there were fireworks. Literally. Long rounds of spectacular fireworks that brightened up the nighttime sky.

People across the country were in a festive mood and would go out on the streets to celebrate. Tables filled with food, tso und of clinking wine glasses, smiles everywhere.

Even John Turner (1929-2020), Canada’s prime minister at that time, joined the public in the joyful occasion.

Jared (it’s his real and only given name) Keeso (pronounced KEE-soh) was born on July 1, 1984, in Listowel. Oh, not that market town in Ireland but the one in North Perth municipality in Ontario, Canada.

That makes him Canadian. And a Cancer (astrological sign for people born June 21-July 21).

It was a double celebration for his parents, Richard and Anne Keeso: the safe delivery of their bundle of joy and . . . Canada Day.

Yes, Jared Keeso came to this world during a national holiday in his country.

It would be hard for any of his Canadian friends to miss his birthday, then.

A young Keeso went to Listowel District Secondary School. He was one of those sports-oriented kids, with him going for ice hockey.

He competed in junior hockey (Junior B team) for the Strathroy Rockets of the Western Ontario Hockey League and for the Listowel Cyclones of the Greater Ontario Junior Hockey League. 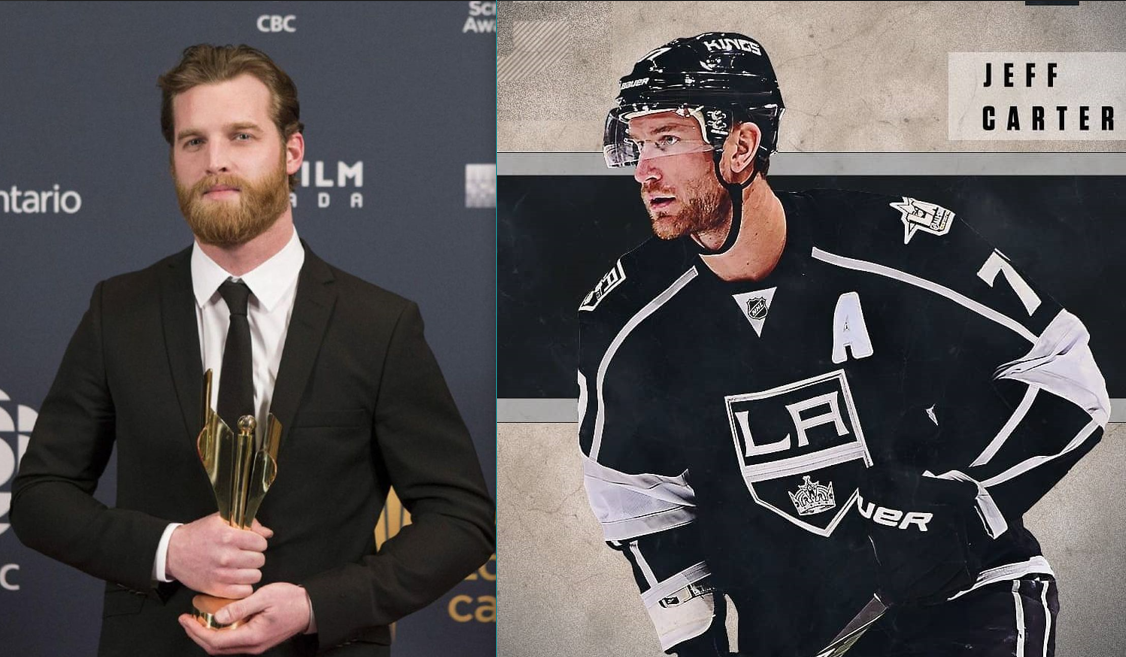 Later, he started to pursue a degree at the University of Waterloo in Ontario. However, he didn’t finish his tertiary education.

As a matter of fact, he didn’t even complete a single semester there! According to TV Guide, at 18, he quit college and enrolled in a drama school in Toronto. His parents backed him up.

Canadians could only imagine if his parents didn’t persuade him enough to pursue an acting career, which Jared Keeso liked to embark on in the first place.

They would never get to laugh at and with “Wayne” and “Shoresy,” the famous TV characters he created and still portray up to this day.

A few days after he celebrated his 34th birthday, Jared Keeso married lawyer Magali Brunelle on July 4, 2018, the same year they got engaged.

His wife works as a director of legal commercial at Coveo, an I.T. company in Quebec. She graduated from Université de Montréal with honors.

According to Famous People Today, Brunelle previously worked as a corporate lawyer and as a civil rights lawyer.

At the time of this writing, there are no little Jareds or little Magalis yet in the Keeso household.

The parents of Jared Keeso own J.H. Keeso & Sons Ltd., a sawmill company in Listowel that started operating in 1872.

Richard and Anne Keeso are the fifth-generation owners, with Richard inheriting it from his father, Harold James Boyd Keeso (1925-2018). The “J.H.” stands for “Jack” and “Harold.”

Three months after Keeno’s grandfather’s death, the sawmill caught fire and “burned to the ground” in September 2018, reported Waterloo Chronicle.

The worth of property damage was estimated at $4 million. 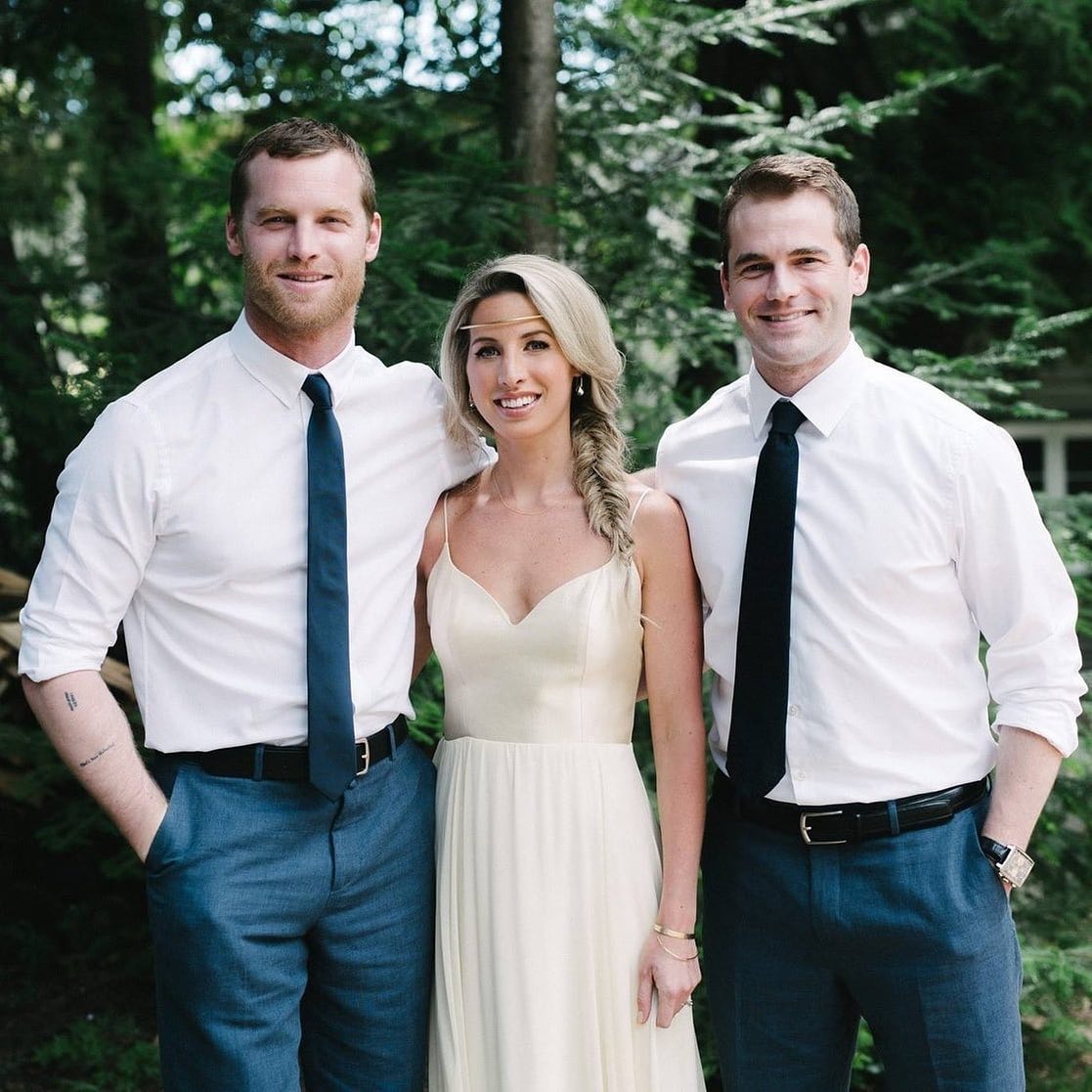 Alan Keeso (married to Jacqueline; got two girls) has two master’s degrees from Oxford. He is the CEO of TPH Center of Excellence (est. 2001), a hockey school headquartered in Nashville, Tennessee.

Abigail Keeso-Hopkins is a registered nurse, who, together with husband Christopher Hopkins, founded That Clean Life, Inc. (ThatCleanLife.com).

It’s a Toronto-based business that caters to health professionals. They sell software for meal and nutrition planning.

Like him, the siblings of Jared Keeso have gone far in their respective fields.

Does Jared Keeso Have Tattoos?

Jared Keeso has more than a couple of tattoos.

One is found on his right bicep (upper arm): a round logo inside a diamond, with the words, “J.H. KEESO.” On his left bicep: a tattoo of his pet dog, a Pitbull mix.

There are other tattoos on his arms and they appear to be words.

It was in 2004 when he first landed roles: one each for a TV series and one for a TV movie.

First set of acting assignments (all as an extra):

1. As “Nate” in the fantasy TV series Smallville

2. As “Hockey Player Number 2” in the teen drama series Life as We Know It

3. As “Bartender” in the TV movie fantasy-romance Eve’s Christmas (see picture below)

Jared Keeso showing a doubtful look, an irritated look and a calm look

When “Eve’s Christmas” was shown, Jared Keeso was 20 years old.

Keeso’s role finds him talking to the character of American actress Elisa Donovan, who’s then talking to an invisible guardian angel. His line:

Miss, I don’t know who you’re talking to but, ah, just go easy on the scotch.

The table below shows some of TV shows where Jared Keeso guested only once as well as some of the movies where he played minor roles:

The TV shows where he received lead roles:

For his superb portrayal of a constable named Ben Chartier in the crime-drama 19-2, Jared Keeso won “Best Lead Performance” at the Leo Awards (2016) and at the Canadian Screen Awards (2015). 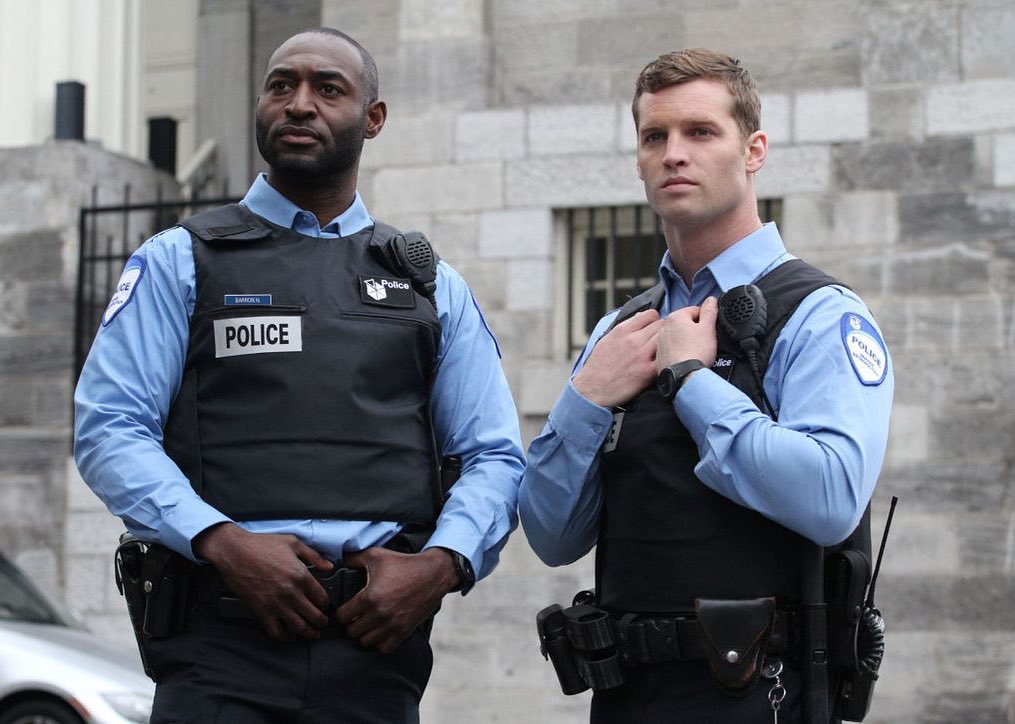 It’s a web series where Keeso and fellow Canadian actor Nathan Dales would utter one-line funny exchanges at each other. Letterkenney is just a fictional rural place.

In 2016 it became a hit TV sitcom, which Keeso wrote and produced. It still runs up to this day.

He also portrayed two roles: that of the lead character Wayne and that of the “mysterious” Shoresy (face hidden from camera).

In 2017, Letterkenney won twice (“Best Comedy Series” and “Best Writing”) at the Canadian Screen Awards. That same year, it also bagged “Best Writing” trophy at the Writers Guild of Canada and “Best Music” at Leo Awards.

In May 2022, its spinoff Shoresey made its debut telecast on Crave in Canada and on Hulu in the U.S. 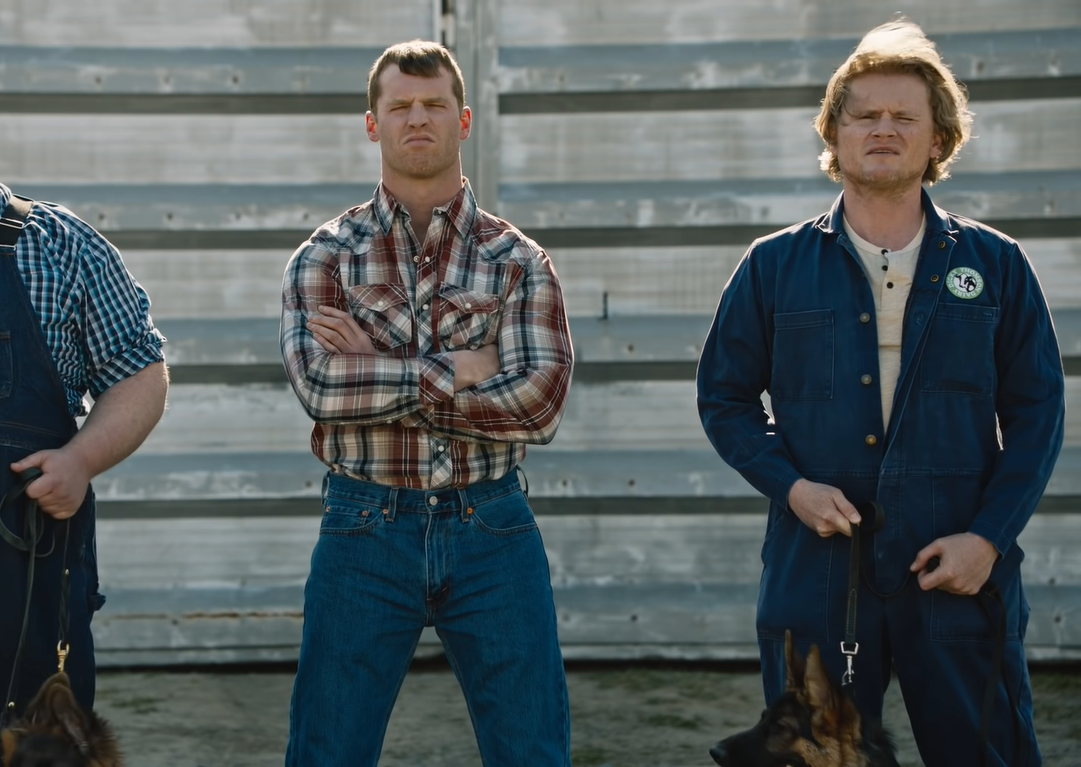 There are people who confuse Jared Keeso to a male Canadian digital creator, who only goes by the username @kopke613.

He makes funny TikTok videos (4 million followers; 95.4 million likes) and has more than 216,000 followers on Instagram. 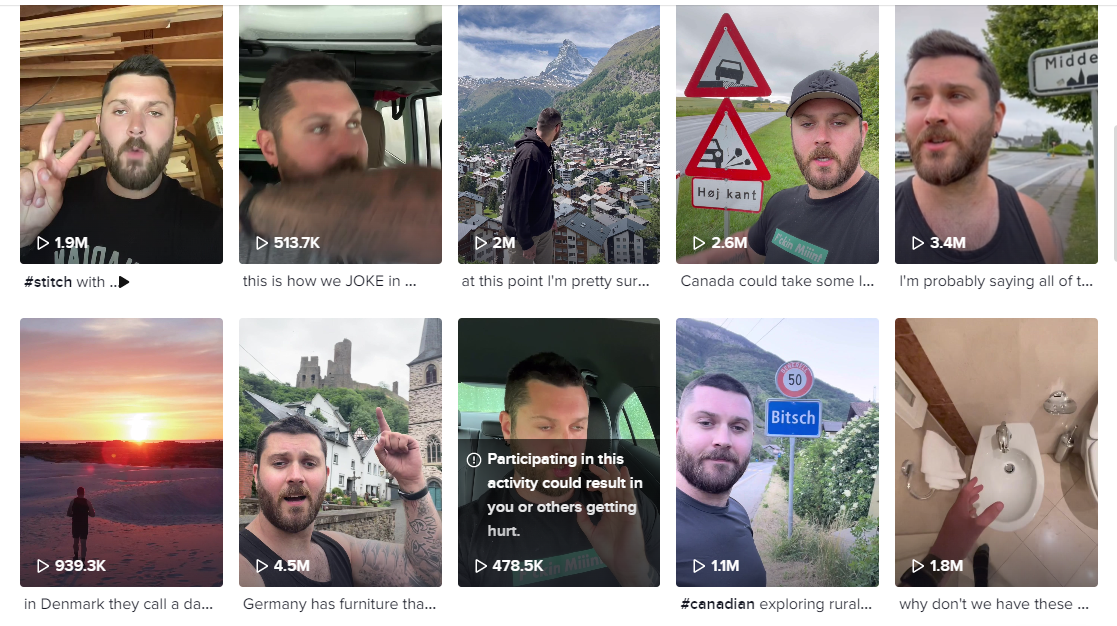 At the time of this writing, per Celebrity Net Worth, the estimated net worth of Jared Keeso is $4 million.

It could be surmised that a bulk of his earnings comes from him being the executive producer of the commercially successful Letterkenny and Shoresy.

Was Jared Keeso In ‘Psych?’

Jared Keeson played Gabe McKinley in the episode Chivalry Is Not Dead... But Someone Is (Season 5, Episode 4) aired on August 4, 2010.

How Did Jared Keeso Lose His Tooth?

According to an article by Canada Media Fund, Jared Keeso had it removed through a surgery for a TV role.

There are no official statements from a movie outfit declaring Jared Keeso will play the role of Wolverine in any upcoming project.

Andrew Hunt, a Los Angeles-based art director and illustrator, just stated via Instagram (@weapon.of.mass.creation) that he would vote for him as a possible candidate.

Who Is Playing The New Wolverine?

Jared Keeso was last seen on the big screen via The Death & Life of John F. Donovan (2018). It’s a drama film with a star-studded cast, including Natalie Portman, Kit Harington, and Thandiwe Newton.

The life of this former ice hockey player and extra has been awesome.

Such description can even be an understatement, considering the awards and the number of loyal viewers.

Perhaps one reason why Jared Keeso isn’t active on social media: despite the public adulation, he wants to celebrate his private life in private.