Do several 21st-century engineers try to reinvent the wheel by creating airless tires?

The phrases “reinvent the wheel” and “to waste time” often go together when explaining what the former means.

Tire manufacturing companies across the globe appear to be bent on some reinvention of sorts. Are they wasting their time?

A couple of them have long been in the business of tire making for more than a century. Yet, here they are trying to create their own respective versions of the wheel.

The only common denominator in their journey to reinventing the wheel?

They want a tire that won’t go flat.

Will airless tires become as common as sliced bread in the not-so-distant future?

What Are Airless Tires?

Defining first another kind of tire - the opposite type and the most common one - will help one understand better what airless tires are.

According to Collins English Dictionary:

A pneumatic tire is a rubber tire filled with air under pressure and mounted around the wheel of a vehicle.

Pneumatic tires are typically placed on trucks and cars. 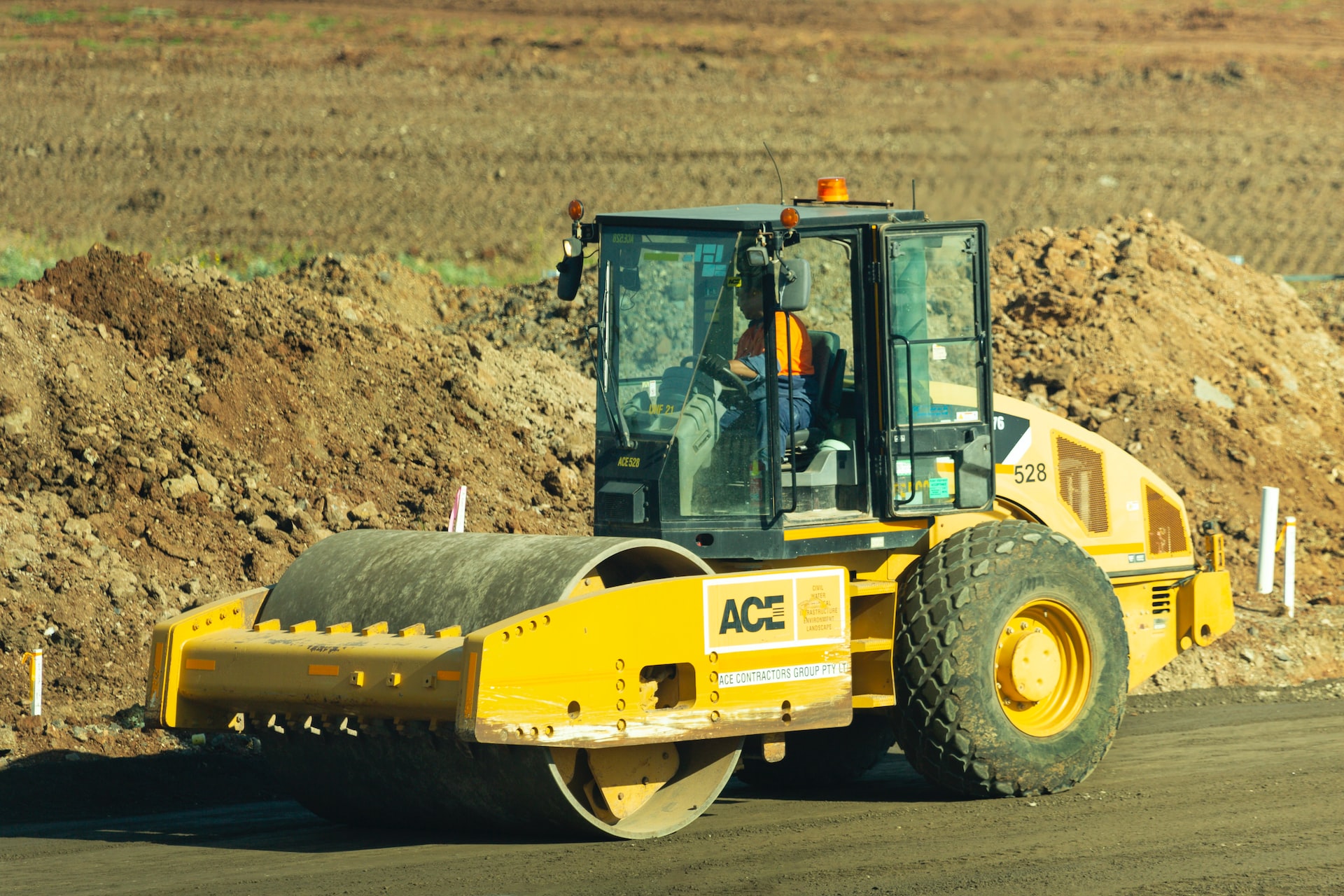 With that said, here’s the author’s take on describing airless tires:

But like solid pneumatic tires, aka resilient tires (because they are abrasion-resistant, puncture-proof tires), airless tires don’t get flat.

Note, however, that airless tires and run-flat tires are not the same.

A run-flat tire is a kind of a solid pneumatic tire that can still run even after getting punctured. For not being supported by air pressure, an airless tire is also referred to as a flat-free tire.

NPTs are commonly used on the following:

The Inquirer reported that when tested, Goodyear’s airless tires can run at a speed of 160 kilometers per hour (about 99.5 miles per hour). 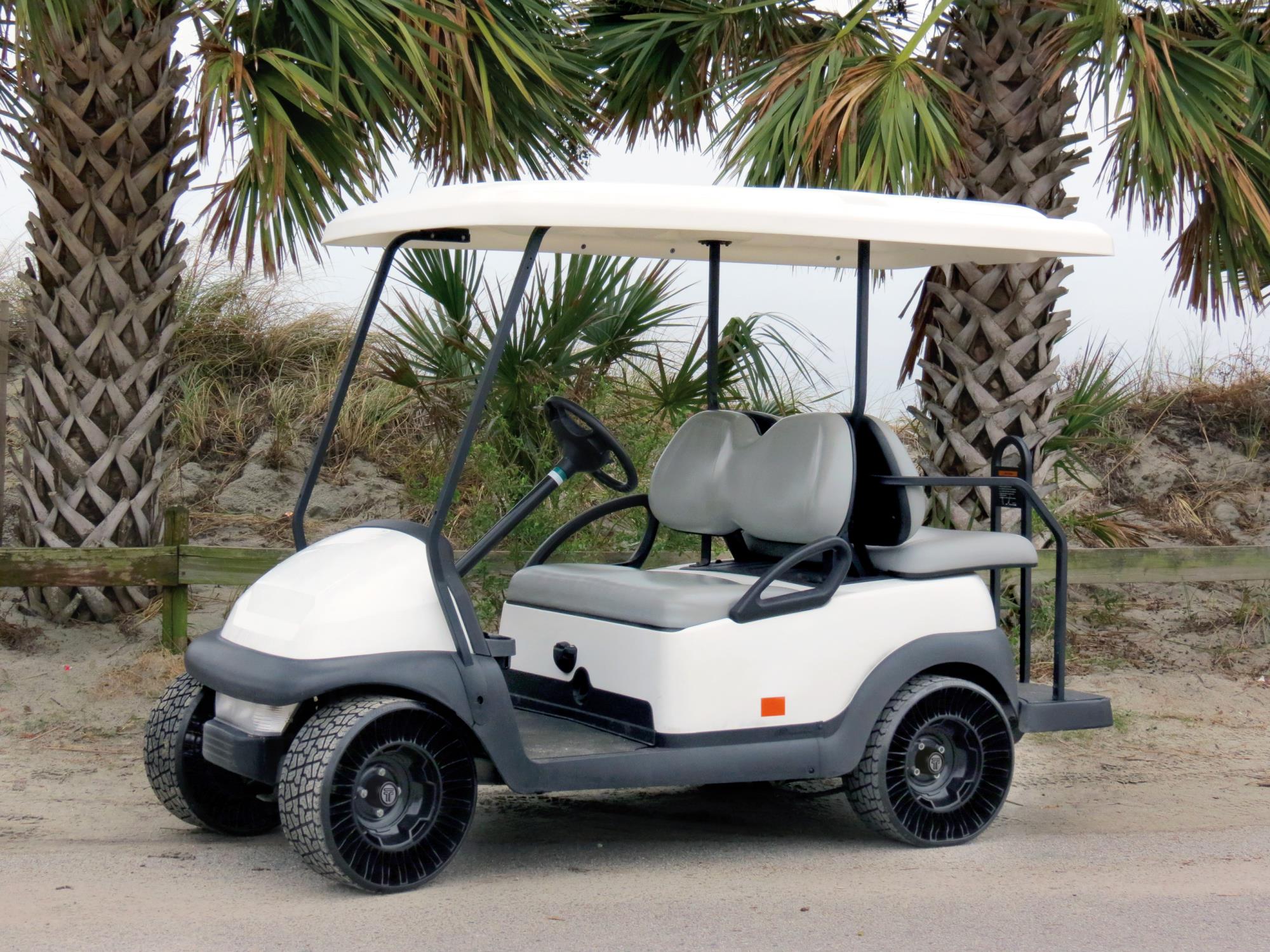 Aircraft inventor and manufacturer Captain James Vernon Martin (1883/85-1956) from Chicago introduced the airless tires in 1938, according to Outback Travel Australia.

They’re made of “criss-cross spokes of ribbed rubber.” 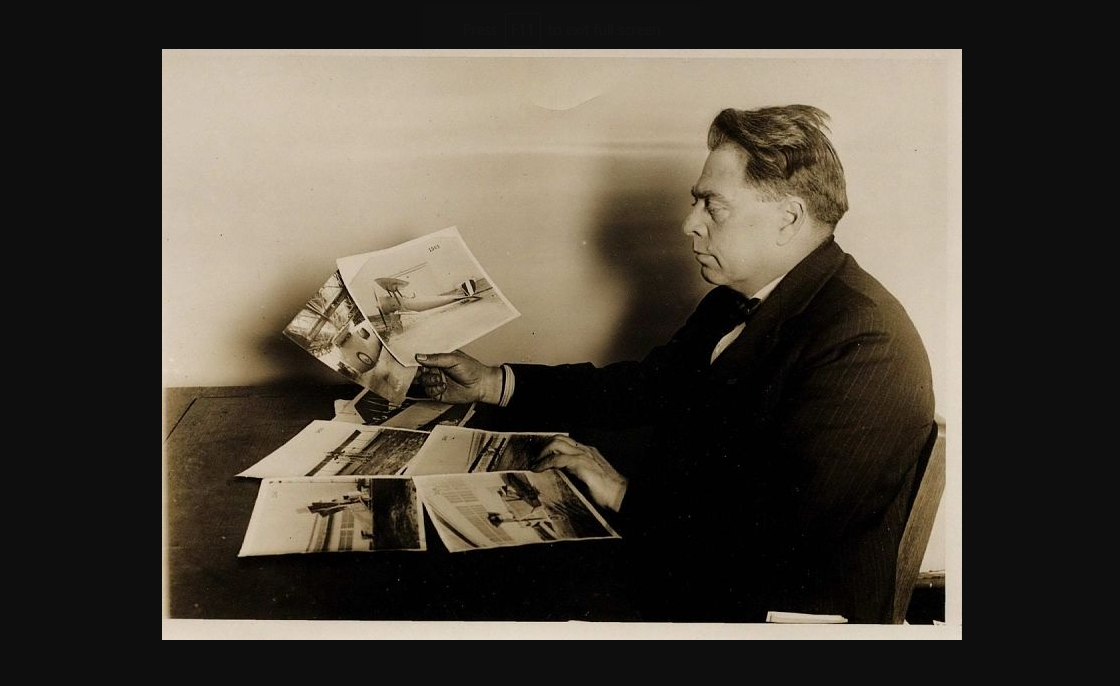 Per AutoRepair-Review.com, Capt. Martin, also an aviator and Harvard alumnus, called those NPTs in the following order:

According to the news site Industry Tap, the University of Wisconsin-Madison developed airless tires for the U.S. military.

Generally, airless tires used for bicycles are made from “extruded proprietary foams,” according to TreadBikely, a website for cyclists.

Below are four companies known for manufacturing airless tires and the corresponding materials they use for their NPTs: 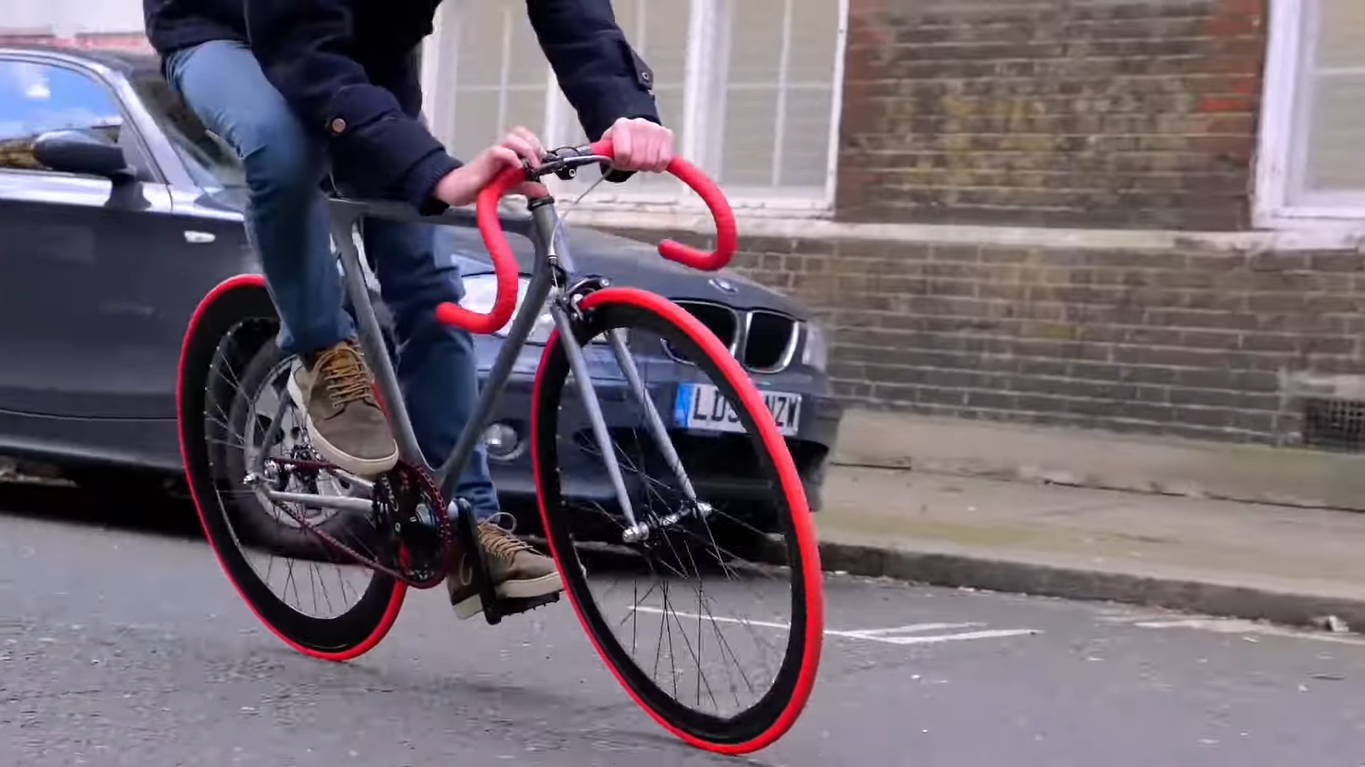 It depends on the brand and on the distance covered. The following are the lifespans of airless tires manufactured by these companies:

If pneumatic tires - or the traditional tires - don’t get punctured, they can last up to approximately 60,000 miles (96,560 km), according to Business Insider.

Tires wear every time they roll because the weight of the vehicle makes them compress and decompress while it’s running.

For example, if a car travels at 70 miles (112 km) per hour, its tires compress and decompress at an estimated 1,000 times per minute.

Per vehicle site Autoily, airless tires can have a lifespan that is three times longer than pneumatic tires.

There are three types of airless tires, by the way, according to Business Day:

Airless tires are also used in the following vehicles:

It doesn’t mean anything innovative is already free from probable weaknesses, such as in the case of airless tires.

The Ohio-based SMART Tire Company tweeted just this August that by 2027, the global market value of tires will be worth hundreds of billions of dollars.

The world’s tire market will be worth a staggering $500 billion dollars; the global bicycle market, $150 billion.

Is it high time to seriously consider airless tires? What could be the probable reasons that the public will love - or snub - them?

Perhaps the first benefit people can think of when using airless tires is that they won’t get a flat tire.

No need to worry about changing a tire, particularly if it has to be done late in the night and, worse, in some god-forsaken place.

Below are some of the other advantages:

1. People can save money.

2. People can have a safer ride.

Blowouts can lead to accidents, which can then cause life-threatening injuries, even instant death.

3. No need to buy and put a spare tire in your vehicle.

That will lessen the load while driving. There can also be more spaces available for other things in the trunk.

There will be a reduction in the production of rubber. A punctured tire is more often difficult to repair and just gets thrown out in a landfill.

Airless tires are made of rubber materials and plastic that make them heavy. Moving heavy wheels requires more power, which in return requires more fuel.

So, they are not fuel-efficient.

Here are other the disadvantages of using airless tires:

1. They have lower suspension capabilities; therefore, rides can be rough.

As Lucas Collom stated in Toyota Forklifts Blog, pneumatic tires can “absorb the unevenness of terrain.”

Non-pneumatic tires (NPTs) can’t do that. Rides can therefore be a bit shaky and bumpy.

2. Safety can also be compromised.

Airless tires collect heat as they roll. The heat can build up because it doesn’t get to escape. Overheating can damage the tire and can cause accidents, too.

3. Prices can be expected to be higher than pneumatic tires/conventional tires.

A lot of money is spent on research and development and technology. Those NPTs from Michelin can cost as much as $750 per tire.

4. Airless tires are not ideal in sand and snow as well as in mud.

They could get into the spokes and stay there. The NPTs will lose their balance if such happens.

Business Day reported that based on the findings of the Allied Market Research, the global tire market will experience significant change less than ten years from now.

Some of the main players who showed interest over airless tires include the following companies:

According to its website, Tokyo-based Bridgestone Corporation (est. 1931) announced in November 2011 how it developed a concept for airless tires.

In 2013, it presented its enhanced “second generation” NPTs, with improvements made in these areas:

In 2017, Bridgestone revealed its version of airless tires for bicycles made through its very own “Air Free Concept” technology. 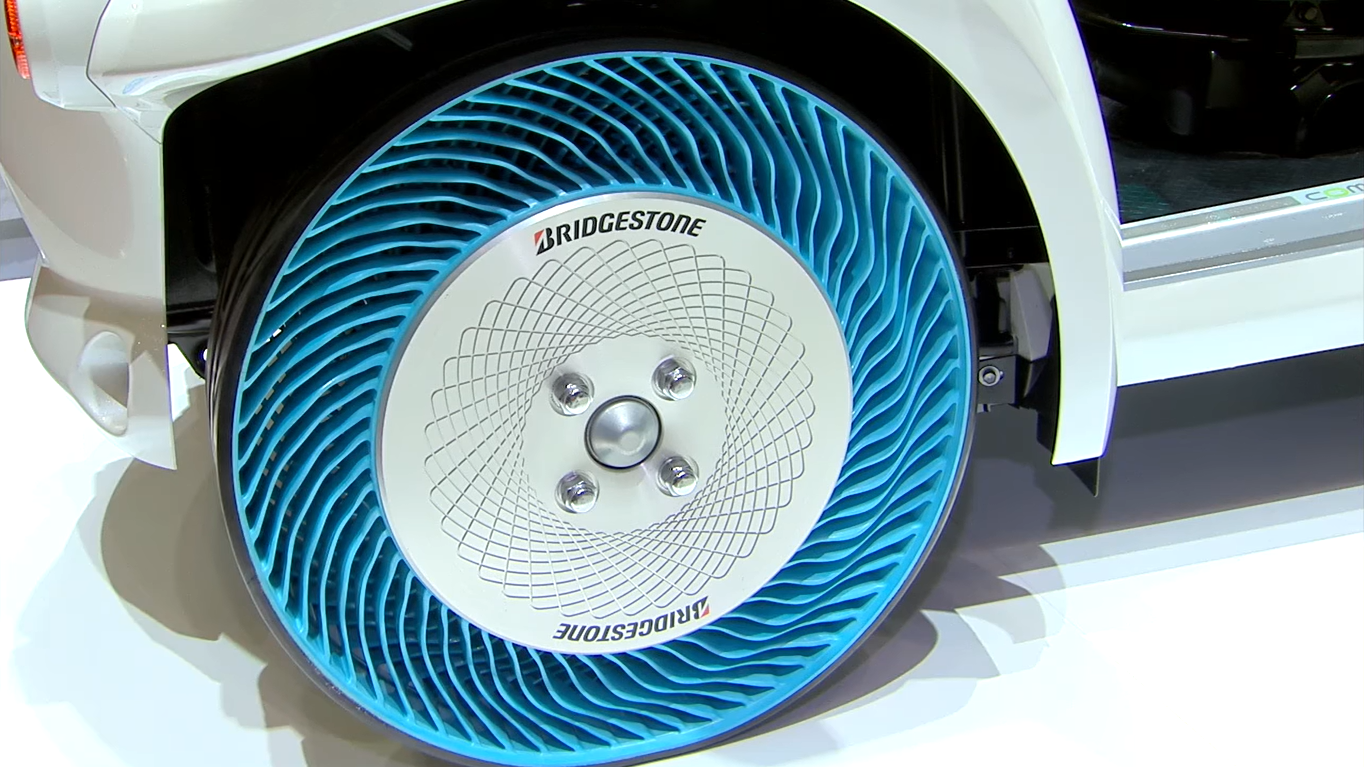 Airless tires from Bridgestone, with sky blue spokes made of thermoplastic

The Goodyear Tire & Rubber Company (est. 1898) from Akron, Ohio, is challenging its own capabilities to create airless tires.

Per Business Insider, the company predicts that it can finally produce “road-ready” NPTs by 2030.

Goodyear’s airless tires, according to The Next Web, were tested on the Tesla Model 3 and on some self-driving shuttles. 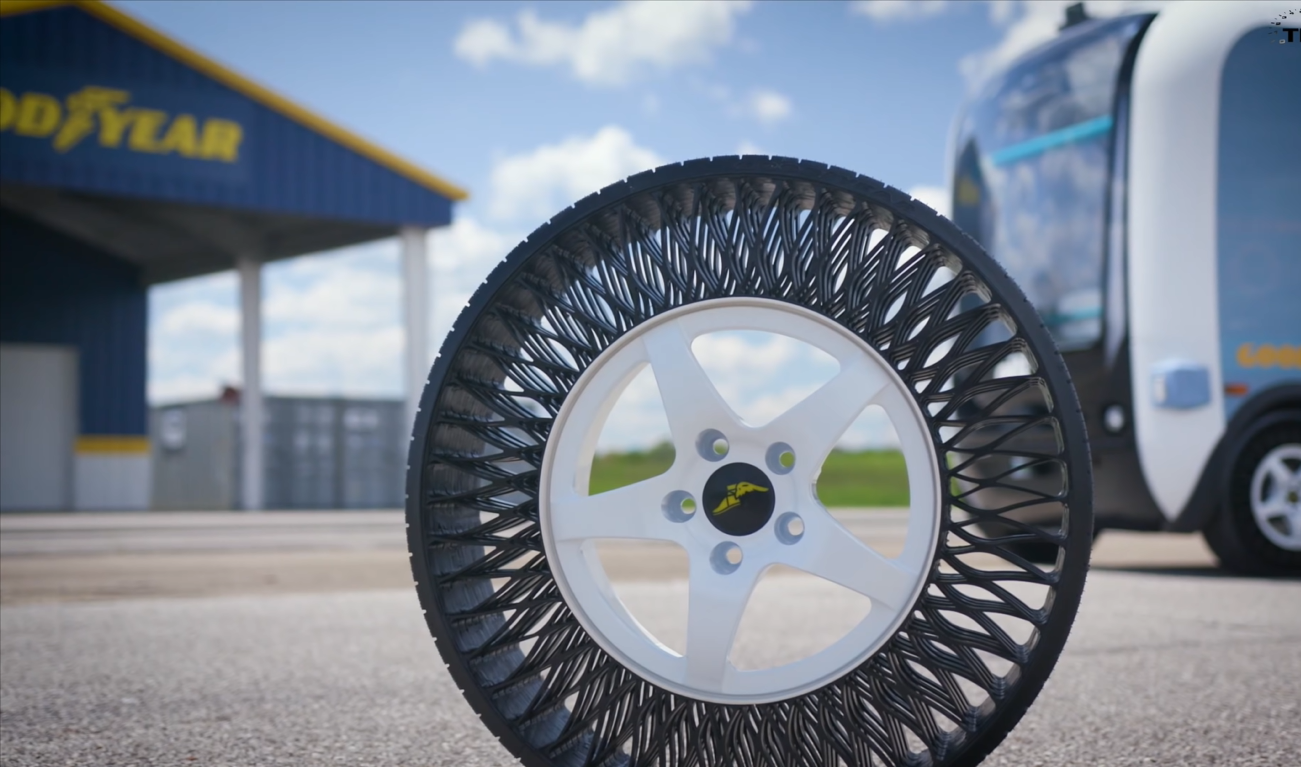 Headquartered in Clermont-Ferrand in central France, Michelin (est. 1889) has been pioneering the development of airless tires since the early 2000s.

In 2005, Michelin North America surprised the public with the Tweel (“tire” + “wheel”) designed by Dr. Tim Rhyne and Steve Cron.

It is comprised of a rigid hub connected to a shear band by means of flexible, deformable polyurethane spokes and a tread band, all functioning as a single unit.

Ahead of its official launch in 2024, the public already heard about Michelin’s latest NPT.

It’s the Uptis (Unique Puncture-proof Tire System) tire, an airless tire made of fiberglass and rubber.

The Uptis is recyclable and fuel-efficient. It can also last longer. In 2019, it was tested on Chevrolet Bolt EVs, according to Chevy’s website. 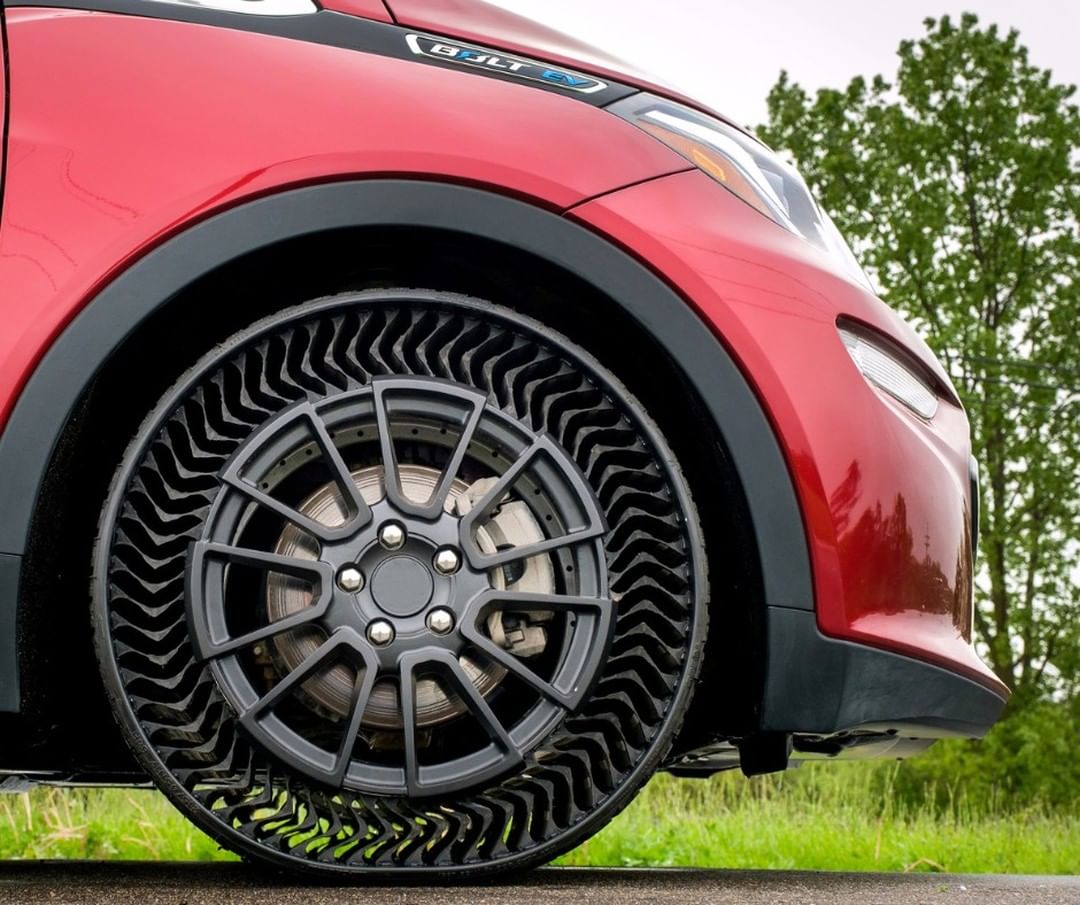 This company started in 2005. Minnesota-based Polaris Industries (est. 1981), the world’s biggest snowmobile manufacturer, bought it in 2012, according to The Review.

Before it was acquired, the U.S. Department of Defense endowed it with a four-year grant worth $18 million to create airless tires for military use.

The U.S. Department of Transportation issued a guideline in Standard No. 129 (“New non-pneumatic tires for passenger cars”) under the Electronic Code of Federal Regulations (e-CFR).

Per Industry Tap, Resilient Technologies indirectly said that NPTs are bulletproof. However, it explicitly stated that airless tires can survive “roadside bombs.”

Creating NPT’s or airless tires is not only about reinventing the wheel for better driving performance and for additional options on saving the environment.

Based on a 2012 report by the U.S. National Highway Traffic Safety Administration:

[Underinflated] Tires are 3 times as likely to be cited as critical events in the pre-crash phase.

Airless tires are basically puncture-proof and flat-proof tires that hopefully will help lessen the risk of road accidents.