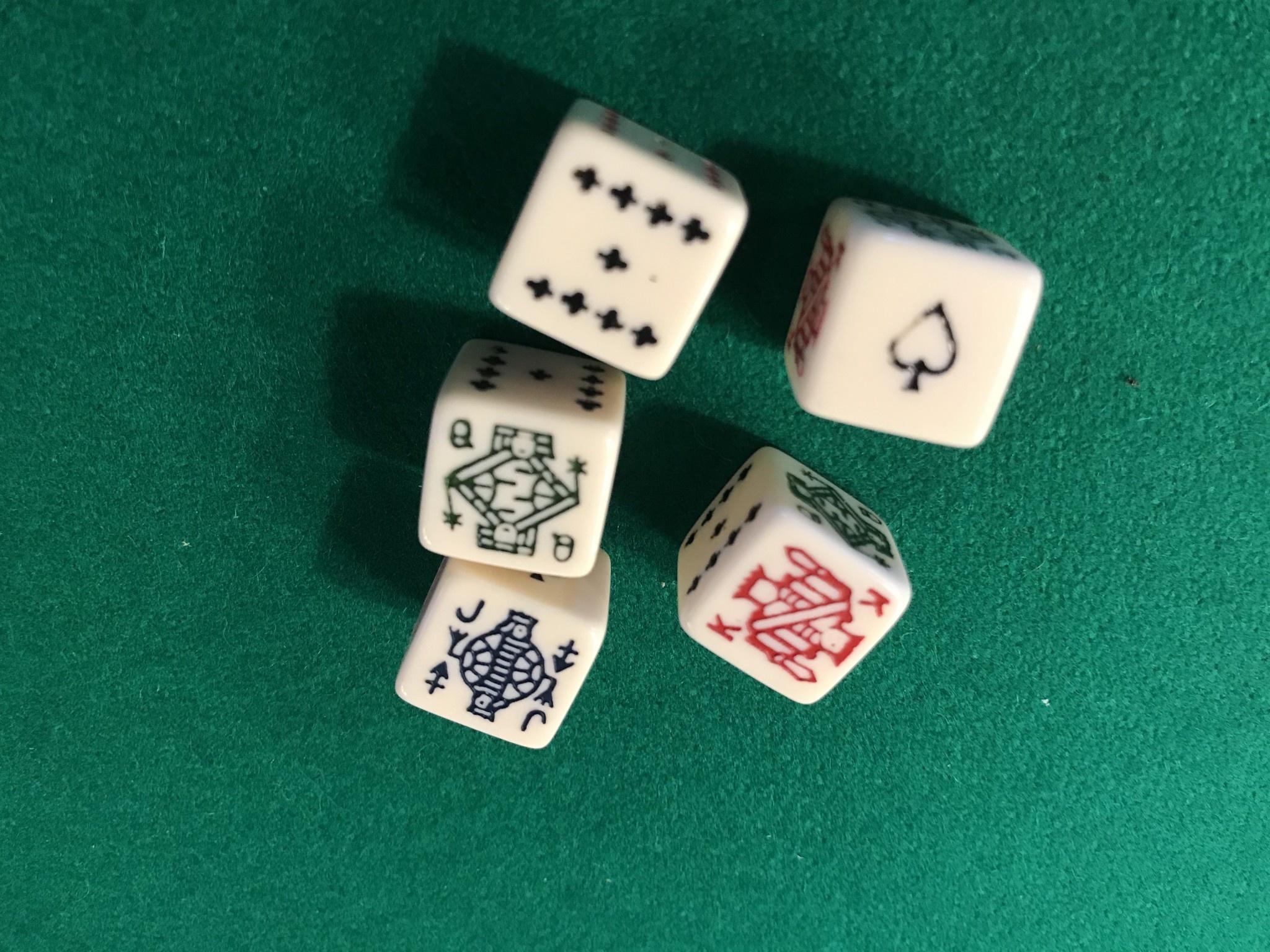 Poker dice is a game in which five dice are specifically marked to represent the top six cards of a deck of playing cards (ace, king, queen, jack, 10, 9). The goal is to toss a winning poker hand, with the exception that five of a kind is considered high and there are no flushes. After a player's initial throw, he may choose to either stand pat or draw (throw again), as in draw poker. In the latter case, he separates his best-showing dice and rolls up to three of them again, after which his outcome remains the same. A hand of five aces loses in a variant known as horses. Yahtzee is a dice game derived from poker.

Poker dice are dice with depictions of playing cards on them rather than numbers. Poker dice feature six sides, one for each of the Ace, King, Queen, Jack, 10, and 9 in a poker hand.

Liar dice is a kind of poker dice that allows for bluffing, as the name implies. Each player covers his throws and declares his hand, either honestly or untruthfully. The second player, known as the caller or doubter, has the option of trying for a better hand or calling the bluff. If the caller is right, he wins; else, he loses.

The game of poker dice has been around since the second part of the nineteenth century. There are many variations, such as Spanish poker dice with different regulations and eight-sided dice with the numbers ace, king, queen, jack, 10, 9, 8, and 7. Ordinary six-sided dice may also be used to play poker dice; the sides are then counted 1 (aces)-6-5-4-3-1 in decreasing order. 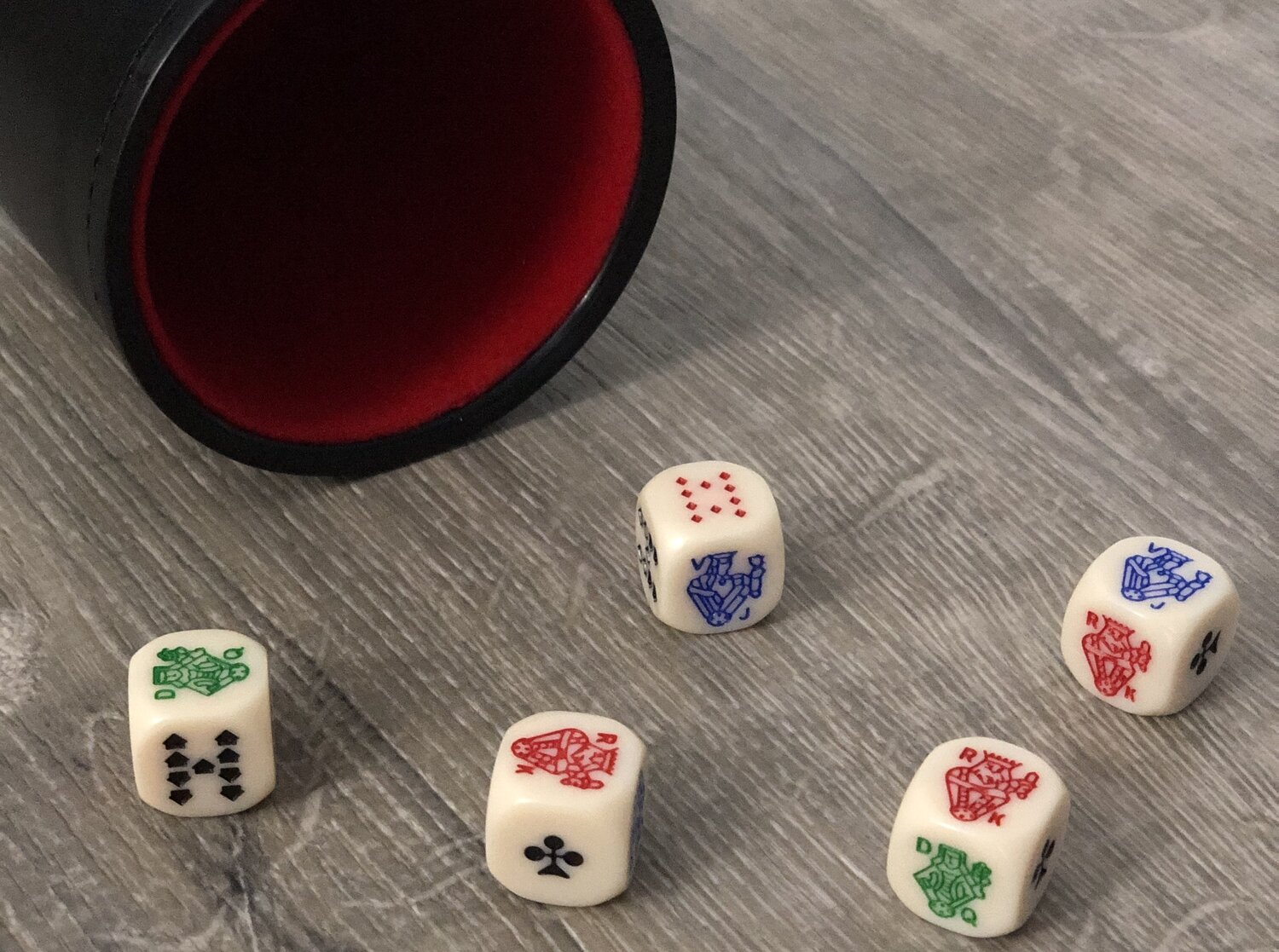 A distinct card rank is shown on each side of the dice.

If you're using normal dice instead of poker dice,

Ace with a single club (six).

How to Play Poker Dice

With 5 dice and two or more participants, the traditional poker dice game is played. Each player gets three dice to roll and the option to hold them between rolls. After three rolls, the best hand is declared the winner.

A straight is only counted as a bust in most versions (high-card). Because a straight is less likely than a full house, it should be ranked higher than a full house if tallied, but it is traditionally ranked lower, as in card poker. Due to the absence of suits on the dice, neither a "flush" nor a "straight flush" is conceivable.

A straight to a king is termed a straight in certain rules, whereas a straight to an Ace is dubbed (incorrectly) a flush. Each one has a chance of 120/7776. A Straight defeats a Full House (unlike in card poker, but properly representing its chance) but not a Four of a Kind under these rules (incorrectly reflecting its lower probability). A Flush wins over a Four of a Kind (as in card poker, and correctly reflecting its lower probability).

The first player decides the ante in each round. Anyone else who wants to participate in this round must pay the ante. If a player puts in a single chip, for example, all other players must likewise toss in a single chip if they want to play this round.

A player may roll the dice up to three times during his or her turn. Players attempt to create the greatest possible combination while doing so. Players may retain and reroll as many dice as they like throughout their turn. A player's turn is finished when they are happy with their dice combination (or have rolled three times). They may either check (i.e., keep the pot at its current level) or raise (i.e., increase the amount of money in the pot) (add more chips to the pot). To remain in the round, if a player raises, all other players must also raise.

The dice are transferred to the next player once each player's turn has ended. To advance to the next round, this player must outscore the preceding player's combination. Players are challenged to roll a better combination in future turns throughout around in order to remain in the game.

The pot is won by the player who has the best combination. The round is finished and the money is collected if the last person at the table rolls the highest combination.

How To Play Poker Dice

In order from high to low, the following Poker dice rolls:

By the conclusion of the game, the person with the most chips has won.

How to Play Poker

The game board's center square, which may be utilized by all players as part of a run, but can not be claimed by anyone player.

When a player rolls a combination of five dice with a face value of seven, he or she has the choice of betting on Luck 7 or any other combination that occurs on the dice (full house, three of a kind, etc).

When a player rolls a combination of five dice with a face value of eleven, he or she has the choice of betting on Luck 11 or any other combination that occurs on the dice (full house, three of a kind, etc).

When a player rolls a five-of-a-kind, he or she may put their chip on any available square on the game board. Wild!

After all of the "straight" squares on the game, the board has been filled, you will get a "bouncer" every time you roll another straight. A bouncer enables a player to take any opponent's chip off the game board except one that has already been put on a completed run.

When all of the "full house" squares on the game board are filled, the outcome is a "bouncer." A bouncer enables a player to take any opponent's chip off the game board except one that has already been put on a completed run.

The goal of the game is for a person or a group of players to line up five chips in a row on the board, forming a "run." The person or team that scores two runs is the winner!

When a player takes a turn, he or she must roll all five dice. The face-up dice combination is read like a poker hand. Full house, straight, five-of-a-kind, four-of-a-kind, three-of-a-kind, two pairs, and one pair are among the viable hands.

To get the greatest potential combination, a player may roll the dice once, twice, or up to three times. A player may roll one to five dice again after their first roll. You may re-roll one to five dice on your second and third rolls, including anything you put aside on your initial roll. Place a poker chip of your team's color on the board after the third roll, matching the poker hand combination of dice. To begin their turn, the next player to the left rolls five dice.

A run occurs when five chips are placed in a row on the board by a player or team. During the rest of the game, chips in a run are safeguarded. A player's run may share chips with his or her previous runs, but he or she can not claim a new run by adding chips to the end of an existing one. A fresh run must include at least four chips that are different from the previous one.