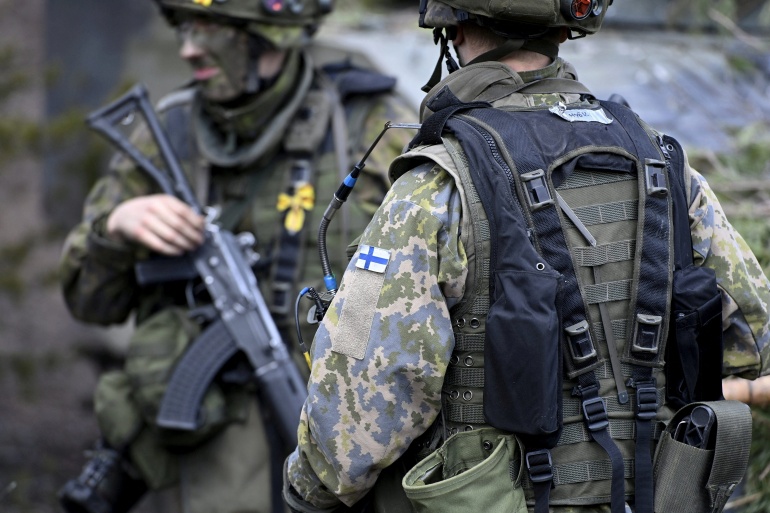 In order to preserve the freedom and safety of the Allies through political and military measures, Turkey backs Finland and Sweden's NATO membership bids.

It should also be recalled that the North Atlantic Treaty, also known as the Washington Treaty, was signed on April 4, 1949, and it established the NATO, a military alliance.

This agreement was made in an effort to counterbalance the Soviet forces that were stationed in central and eastern Europe following World War II.

The organization's official website says that on June 28, 2022, they looked at the trilateral memorandum between Turkey, Finland, and Sweden.

For weeks, Turkey had angered its partners by saying it would stop Finland and Sweden from joining.

The announcement was made during a meeting between Niinisto, the Swedish Prime Minister Magdalena Andersson and the Turkish President Recep Tayyip Erdogan before the NATO summit in Madrid started for real.

The summit was facilitated by NATO Secretary-General Jens Stoltenberg, and the agreement was ratified during a signing ceremony.

The memorandum signed by the three parties on June 28 "addresses Turkey's concerns, especially military exports and the fight against terrorism," according to NATO Secretary-General Jens Stoltenberg.

Following the signing of the agreement on Tuesday, Secretary-General Stoltenberg announced:

The door is open — the joining of Finland and Sweden into NATO will take place.

The news of a deal solidifies the most significant shift in European security in decades, as the Nordic countries end their decades-long neutrality in order to join the military alliance.

NATO Secretary-General Jens Stoltenberg says that Sweden will work faster to comply with Turkish requests to extradite suspected combatants and that both Sweden and Finland will change their laws to treat them more harshly.

Stoltenberg also said that Sweden and Finland would make it easier for Turkey to buy weapons from them.

According to the Turkish president's office, Turkey "got what it wanted" from the agreement, which means complete collaboration with Turkey in the war against the PKK and its affiliates, including the YPG.

Additionally, Finland and Sweden committed to "taking serious steps in the criminal prosecution of terrorist criminals" and "not imposing embargo limitations in the sector of defense industry" on Turkey.

Erdogan promised to press US President Joe Biden on an agreement for the F-16 fighters before he left for Madrid.

At the conference, Biden and Erdogan are anticipated to meet.

Today, Turkey, Finland, and Sweden's representatives working with the NATO Secretary-General came to the following agreement.

Turkey, Finland, and Sweden declare their commitment to the Washington Treaty's principles and ideals.

Also, Finland and Sweden, which want to join NATO, have promised Turkey their full support if there are threats to its national security.

The trilateral memorandum between Turkey, Finland, and Sweden also stated:

Finland and Sweden reject and condemn terrorism in all its forms and manifestations, in the strongest terms. Finland and Sweden unambiguously condemn all terrorist organizations perpetrating attacks against Turkey, and express their deepest solidarity with Turkey and the families of the victims.

Moreover, Finland and Sweden have confirmed that the PKK is a terrorist organization.

Finland and Sweden resolve to prevent the PKK and other terrorist organizations, as well as their extensions, from operating.

The Alliance was formed as part of a larger plan to reach three goals.

NATO's goal is to make sure that its members are free and safe by using both political and military means.

NATO promotes democratic values and lets its members talk and work together on defense and security issues to solve problems, build trust, and, in the long run, keep war from happening.

NATO is dedicated to the peaceful settlement of disputes through military means.

It possesses the military might to conduct crisis-management operations if diplomatic efforts are unsuccessful.

This means that if a member of NATO is attacked by another member, Article 5 will go into effect.

On Becoming A Full Member Of NATO

This animation shows the steps that a candidate country must go through in order to become a full member of NATO, a status that is acknowledged on a national as well as an international level.

As stated in NATO's founding treaty, it has always been possible for new members to join the Alliance as long as all of the existing Allies agreed.

The Membership Action Plan (MAP) was made to help countries that want to join NATO get ready for the possibility that they will join.

North Macedonia is the newest member of NATO. Before that, there were only 12 countries in NATO.

There are thirty nations that are members of NATO, including the following:

Many of the requirements to join NATO have already been met by both Finland and Sweden.

Some of the requirements are having a democratic political system that works, being willing to be open about the economy, and being able to send troops to help NATO missions.

Moreover, any other European state in a position to advance the principles of this Treaty and to contribute to the security of the North Atlantic area is welcome to join NATO, according to their website.

On the other hand, when Turkey backs Finland and Sweden's NATO membership, other countries in the area increase their anxieties as far as Russia's attack on Ukraine is concerned.