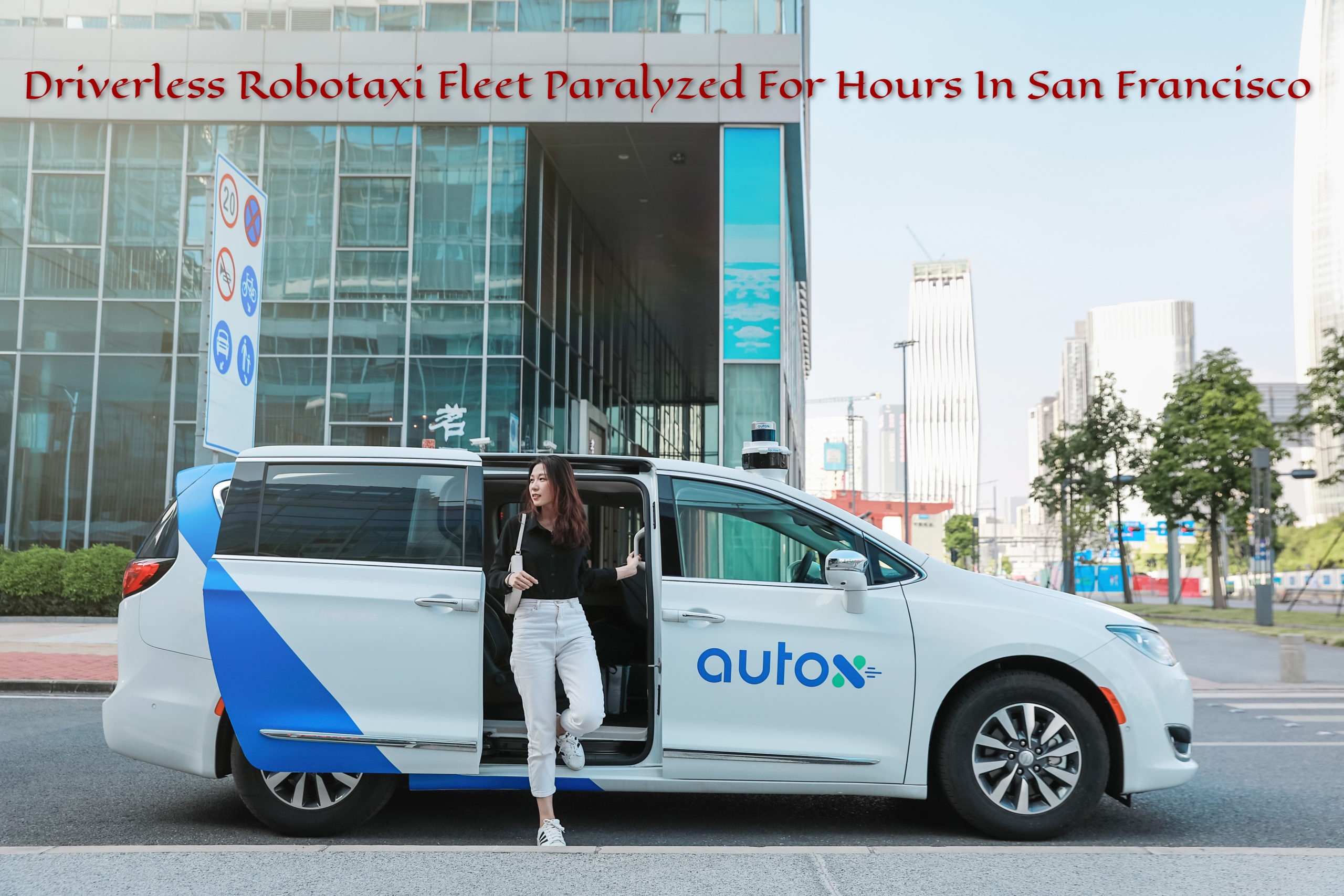 A fleet of driverless robot taxis had its first system failure.

At least a dozen autonomous Chevrolet Bolts from GM Cruise Automation were seen in San Francisco for a few hours, blocking the junction at Gough Street and Fulton Street.

The automobiles are all parked on the road without a driver, as shown in the images. Between the hours of 10 p.m. and 5 a.m, Cruise is permitted to run autonomous robotaxi in the city and collect fares.

In this case, it appears that there was a flaw that affected every car. Employees of Cruise had to manually move the automobiles from the junction and the street to the depot.

Although the precise causes are unknown, the Internet has already advanced several amusing hypotheses.

Some people asked, "Where is John Connor when we need him?" as the cars "unionized," "emigrated," and gathered together to "take control over humanity."

More information is becoming available in the wake of a Cruise system malfunction that resulted in a few dozen robot taxis blocking a San Francisco crossroads for at least two hours before being removed by manual or remote driving by Cruise staff.

“We had an issue earlier this week that caused some of our vehicles to cluster together,” a Cruise spokesperson said. “While it was resolved and no passengers were impacted, we apologize to anyone who was inconvenienced.”

However, it becomes evident from subsequent accounts that this is not the first time it has occurred and that the cars' behavior was not at all unexpected.

Three to four cruise vehicles were in such an immobilized state in recordings and photographs from an event that happened approximately a week ago, according to a Twitter user:

"Three autonomous Cruise vehicles are stalled at and partially blocking the corner of Geary and Mason, adding to the evening's technological anomalies."

What Happens When A Driverless Car Gets Pulled Over By The Police?

Traveling at night without turning on its headlights, a driverless Cruise car is shown getting pulled over by San Francisco police in an Instagram video that was first shared on April 1.

A policeman approaches the vehicle's driver's side and discovers... no driver.

The cruise restarts past a crossing and then stops once again in front of a restaurant on Clement Street in the city's Richmond District while the perplexed officer makes his way back to his car.

When the police cruiser arrives, the policemen exit and thoroughly examine the vacant car before one of them calls Cruise, presumably.

"There's nobody there." One of the officers is heard stating, "This is nuts."

Cruise said: As planned, our AV stopped at the closest safe area for the traffic stop after yielding to the police car.

The firm stated that "We work extensively with the SFPD on how to interface with our vehicles, including a dedicated phone line for them to call in circumstances like these." An officer contacted Cruise employees and no penalty was issued.

He earlier expressed his worries when a Reddit member identified himself as working with Cruise.

He said that when the commercial robotaxi license was granted in May, at the time the vehicle was taken over, he had previously expressed them to the California Public Utility Commission (CPUC):

To sum up the message, it describes the "Vehicle Retrieval Events" (VRE) that may cause dozens of vehicles to block public roads until they are physically retrieved, as happened on June 28, June 20, and numerous times before that.

It also explains why I believe these events will happen frequently for the foreseeable future, including when the driverless fleet's operating hours are extended to include morning and evening rush hours.

A more worrying possibility is that huge numbers of automobiles might obstruct emergency vehicles like ambulances and fire engines, in addition to the obvious issues with stopping traffic.

He then provides a few explanations for why this may happen:

Even determining the cause of these fleet-wide vehicle retrieval events sometimes takes several hours. One car may experience this situation due to a hardware or software issue.

When a large number of cars reach the VRE condition, it is usually because one of the several cloud services they utilize is unavailable or overburdened.

There have also been instances where both the primary and backup services have failed, making it impossible to contact or access the vehicles' data.

This directly contravenes the terms of the DMV permit that allows Cruise to operate on public California roads, and I highly doubt Cruise has informed the DMV of this.

Although there is no easy quick fix because these cloud services are extremely complex emergent systems that interact with one another, it is anticipated that over time they will become more dependable.

When dealing with this kind of intricate technology, you often have two options: either proceed agonizingly slowly or "go fast and ruin stuff."

Late on Tuesday night in San Francisco, more than a half-dozen Cruise robotaxis stopped working and parked in a roadway, impeding traffic for a few hours until staff members arrived and physically relocated the autonomous cars.

The first hours of operation for Cruise's cars are from 10 p.m. to 6 a.m. on predetermined roadways and without a human safety operator in the driver's seat.

In San Francisco, a vehicle would be fined around $76 for blocking a street sweeper.

TechCrunch contacted the San Francisco Municipal Transportation Authority (SFMTA) to learn more about how it manages such circumstances with autonomous cars and if Cruise would be fined for blocking the crossing, but the SFMTA did not respond.

The problem throws into question Cruise's operating procedure for these kinds of accidents as well as the policies that towns need to develop around autonomous cars when they breach the law.

For How Long Is The Driverless Robotaxi Fleet Paralyzed?

The cruise began operating the city's first completely autonomous robotaxi service. The first hours of operation for Cruise's cars are between 10 p.m. and 6 a.m.

What Are The Fines For Blocking The Street Sweeper?

Fines for blocking the street sweeper are around $76 per car in San Francisco.

The Main Reason Behind The Paralyzed Cars?

The exact reasons are not known, but the Internet has already put forward some humorous speculations. The vehicles would have “unionized”, they would “emigrate.”