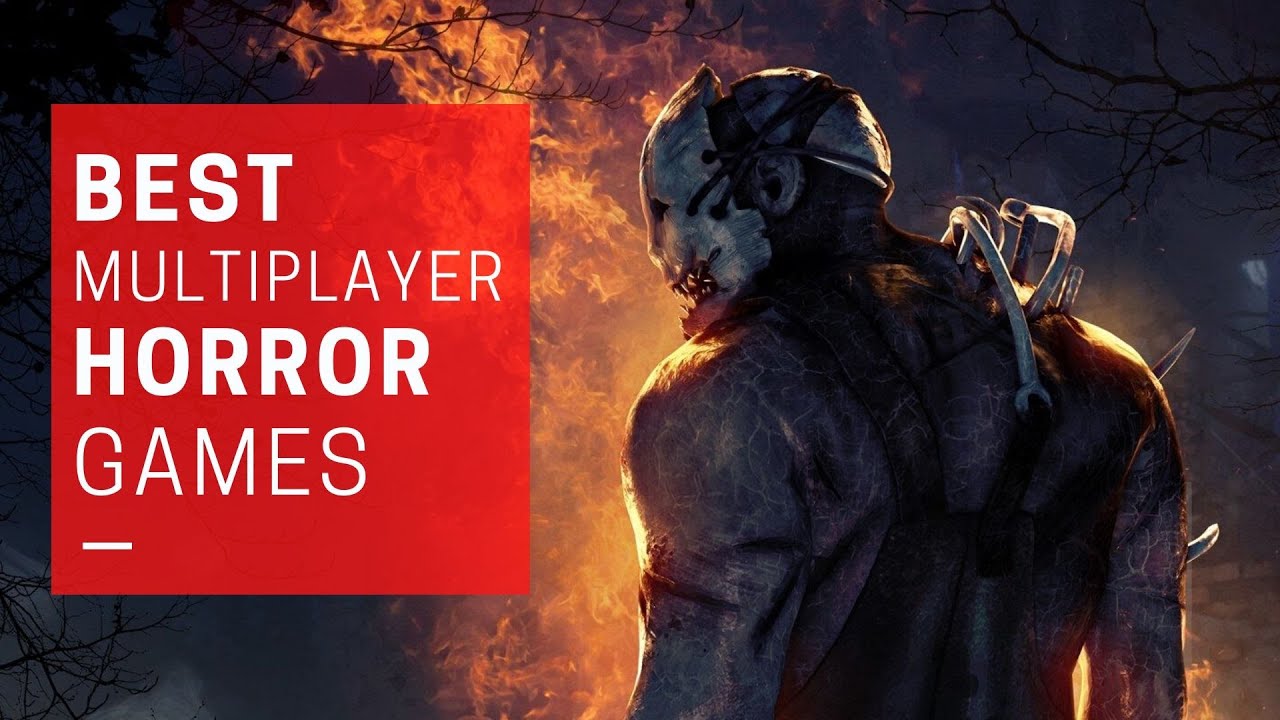 Why go through terrible atrocities alone when you can do so with a companion? With horror multiplayer games, we may transfer our worries onto someone else, so we're not alone in our dread. Finding a decent multiplayer horror game, like everything else, isn't as simple as picking one at random. There's a lot you'll want to stay away from.

As someone who loves addressing horror and confronting my anxieties in a cooperative or even competitive setting, I thought it would be appropriate to highlight the greatest multiplayer horror games. These games excel at combining frightening situations with multiplayer video game mainstays. In the end, this just means that someone will hear me scream while a zombie gnaws at my face.

Dying Light is a survival horror video game released in 2015 by Warner Bros. Interactive Entertainment and developed by Techland. The tale follows Kyle Crane, an undercover spy assigned to infiltrate a quarantine zone in the Middle Eastern city of Harran.

It is set in an enemy-infested open-world metropolis with a dynamic day-night cycle in which zombies are sluggish and clumsy during the day but become highly aggressive at night. When confronted with hazards, the game focuses on weapons-based combat and parkour, enabling players to choose whether to fight or flee.

An asymmetrical multiplayer mode (originally planned as a pre-order bonus) and a four-player cooperative multiplayer mode are also included in the game. The game's development started in early 2012 after the crew had finished working on Dead Island. The parkour system in the game emphasizes natural movement.

To accomplish so, Techland had to scrap most of the story's components and rebuild them from the ground up. The writing team worked with Dan Jolley to develop a narrative that would appeal to an American audience. The Heart of Darkness and The Plague were also inspirations for the tale.

It was announced in May 2013 and published for Microsoft Windows, Linux, PlayStation 4, and Xbox One in January 2015. The game was supposed to be published for PlayStation 3 and Xbox 360, but owing to hardware constraints, both versions were canceled.

At the time of its release, reviewers praised the combat, visuals, cooperative multiplayer, navigation, and the day-night cycle, while criticizing the narrative, difficulty, and technical problems. The game was the best-selling title in January 2015, breaking the previous record for first-month sales of a new survival horror IP. The game was a commercial success, with over 17 million players by the year's conclusion.

Techland is dedicated to the game's support, releasing downloadable content packs, content drops, and free updates many years after the game's original release. Dying Light: The Following, an expansion, was published in February 2016. Dying Light 2 Stay Human, the sequel, is due out in February 2022.

Valve developed and released Left 4 Dead 2, a 2009 multiplayer survival horror first-person shooter. It was published in November 2009 for Windows and Xbox 360, October 2010 for Mac OS X, and July 2013 for Linux. It is the sequel to Turtle Rock Studios' Left 4 Dead. The cooperative gameplay in Left 4 Dead 2 is built on Valve's proprietary Source engine, which was also utilized in the first Left 4 Dead.

Left 4 Dead 2 is set in the aftermath of an apocalyptic epidemic and follows four new Survivors as they battle hordes of zombies known as the Infected, who suffer from acute insanity and become highly violent. The Survivors must battle their way through five campaigns, with safe houses serving as checkpoints in between, with the aim of escaping at the end of each campaign.

The "AI Director 2.0," which analyzes the players' performance and changes the situation to offer a dynamic challenge, modifies the gameplay procedurally. New kinds of special infected and a melee weapon arsenal are among the other new features.

During the Microsoft press conference at E3 2009, a trailer for the game was shown. It elicited a mix of favorable and negative critical and community responses before its publication. The game's graphic nature sparked an unusually high amount of pre-release criticism.

As a result, the cover image was changed, and Australia and Germany declined to grade the unaltered version at the time of publication. However, reviewers praised the game after its debut, and it is now widely regarded as one of the best video games ever created.

Crytek developed and released Hunt: Showdown, a first-person shooter video game. On February 22, 2018, it was released in early access on Steam, and on May 29, 2019, it was released on Xbox Game Preview.

The game was published in its entirety on Microsoft Windows on August 27, 2019, and on Xbox One on September 19, 2019, and PlayStation 4 on February 18, 2020. The player takes on the role of a bounty hunter who must slay a legendary creature in order to collect the reward and live long enough to reach an extraction point in the game.

Under the title Hunt: Horrors of the Gilded Age, Hunt: Showdown was initially under production at Crytek USA, which wanted to produce a spiritual successor to Darksiders, a video game series created by its predecessor, Vigil Games.

It was intended to be a multiplayer cooperative game. Crytek USA was shut down owing to financial difficulties after the original announcement in June 2014, and the work was moved to Crytek's headquarters in Germany.

The game was re-announced in May 2017 under the new title Hunt: Showdown, and it became a competitive multiplayer game in which players must battle other players and AI-controlled creatures in a huge area that mimics an open world. When it was first released, the game got mostly favorable reviews and was lauded for its unique gameplay loop.

Left 4 Dead is a Valve-produced multiplayer survival horror game that was released in 2008. It was developed by Valve South and published by Valve. The game is available for Microsoft Windows, Xbox 360, and Mac OS X and runs on Valve's proprietary Source engine.

On November 18, 2008, the digital retail disc version was released in North America and Australia, and on November 21, 2008, it was released in Europe. The game pits four protagonists dubbed the "Survivors" against hordes of the infected in the aftermath of a zombie outbreak on the East Coast.

A single-player mode with AI-controlled ally characters, a four-player co-op campaign mode, an eight-player online versus mode, and a four-player survivor mode are available. The "Director," an artificial intelligence (AI) that regulates level pace and object placements in all modes, aims to provide a dynamic experience and enhance replay value.

When Left 4 Dead was first released, it was praised for its replay value, cooperative gameplay, and movie-like experience by the industry press. The lack of a narrative and the limited level selection was both criticized.

The game has been recognized by the Academy of Interactive Arts & Sciences and the British Academy of Film and Television Arts, among others. Valve enhanced the game with free downloadable content, similar to what they did with Team Fortress 2. The "Survival Pack," the first, was published on April 21, 2009.

The second piece of DLC was paid for on Xbox Live, and it came in the shape of a new Campaign called "Crash Course," which was published on September 29, 2009, for both the PC and Xbox 360. On October 28, 2010, the Mac version of Left 4 Dead was launched.

Because of the game's success, a sequel, Left 4 Dead 2, was developed and published on November 17, 2009. On October 5, 2010, a new map named "The Sacrifice" was published for both Left 4 Dead and Left 4 Dead 2. All Left 4 Dead campaigns were transferred to Left 4 Dead 2 in July 2012, including cross-platform multiplayer compatibility for both the Windows and Mac versions of the game.

Friday The 13th: The Game

Friday the 13th is a lucky day. The Game is a survival horror video game released by Gun Media and formerly created by IllFonic. It is based on the same-named film series. It was first published as a digital release on May 26, 2017, and then as a physical release on October 13, 2017, for PlayStation 4 and Xbox One. On August 13, 2019, a Nintendo Switch version was published.

The game is an asymmetrical multiplayer game in which up to seven players represent counselors at Camp Crystal Lake and one player controls Jason Voorhees. It's a game with a semi-open environment that players may explore deeper.

The game servers were shut down in November 2020 due to license problems with series co-creator Victor Miller. However, via peer-to-peer matching, the game is still playable online. The game will be supported and maintained by the creators until further notice.