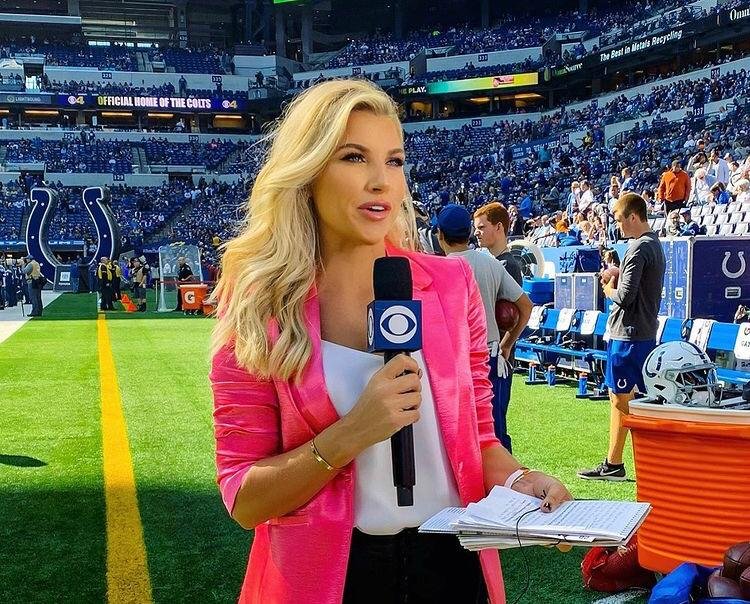 Melanie Collins is a CBS Sports NFL sideline reporter and the anchor of the Golf Channel shows Big Break and Driver vs. Driver. She also works as a fill-in host for ESPN's SportsNation.

Who Is Melanie Collins?

Melanie Collins (born February 6, 1986, going to be 36 as of 2022) is a well-known American sportscaster, host, reporter, social media influencer, and businesswoman who hails from State College, Pennsylvania. She is well-known in the United States as a CBS Sports NFL sideline reporter.

Collins also works as a fill-in host for ESPN's show SportsNation and hosts different TV series such as Driver vs. Driver and Big Break, all of which appear on the Golf Channel. On the internet, she has a sizable fan base.

Melanie Collins is a CBS Sports NFL sideline reporter and the anchor of the Golf Channel shows Big Break and Driver vs. Driver. She also works as a fill-in host for ESPN's SportsNation.

Melanie worked as a sideline reporter for CBS Sports Network's college football and college basketball coverage before getting elevated to the NFL. Her responsibilities included reporting from all major athletic events throughout the world, including the Winter Olympics, FIFA World Cup, Super Bowl, NCAA Football National Championship, Stanley Cup Playoffs, NCAA Basketball Final Four, NFL Draft, NBA Finals, and World Series. She was also the host of the Fantasy Football Live show, which aired once a week.

Collins covered the NBA for NBA-TV and Turner Sports, college football and basketball for the Big Ten Network and Total College Sports, and Major League Baseball for MLB.com before joining Yahoo! Sports. She's also been on Good Morning America, Inside Edition, CSN Bay Area, NBC Sports Network, PGA.com, Nascar.com, and E! News, where she contributed to and hosted programmes.

Melanie is a graduate of a local high school when it comes to her schooling. Following that, the Pennsylvanian attended Penn State University and earned a bachelor's degree in broadcast and journalism.

Collins is also a quick study who is interested in a wide range of topics. As a consequence, the American is presently enrolled in the New York Institute of Art and Design to pursue another Interior Design certificate. Melanie, on the other hand, got a jump start on her journalism career while still a sophomore in college. While working as a bartender, she was presented with the chance to work at AccuWeather.

Melanie Collins celebrates her birthday on February 6th every year. Nancy and Doug Collins welcomed her into the world in 1986 in State College, Pennsylvania. Collins is also the younger sister of Christian and the older sister of Kurtis. Furthermore, being a Pennsylvania native instantly qualifies her as an American citizen. Furthermore, she is of Caucasian descent.

According to horoscopic forecasts, the blonde sportscaster is an Aquarius, making her free-spirited, confident, and one of the nicest hosts in the profession. Moreover, golfing, yoga, boxing, tennis, water sports, snowboarding, travelling, interior designing, wardrobe styling, make-up artistry, and spending time with her family and two pet dogs, Nixon and Snoop, are some of her favourite pastimes.

Melanie Collins has dated James Neal (2014) and Scottie Upshall in the past (2009–2013). In July 2021, Melanie Collins is said to have paired up with Alex Rodriguez. Alex Rodriguez is an American baseball player who will be 47 years old in July 2022. Alexander Emmanuel Rodriguez, a Seattle Mariners shortstop, was born on July 27, 1975, in New York City, New York. He is known for dating prominent actresses and models. Leo is his zodiac sign.

According to credible sources, Melanie amassed a total net worth of $500k over the course of her nearly decade-long career. The Pennsylvanian serves as an anchor, sideline reporter, and entertainment host in the same way.

Collins, suffice to say, earns a large income, the specifics of which are still being worked out. Aside from that, a sideline reporter makes an average of $42k per year, with a maximum of $107k.

How Much Does Melanie Collins Make?

According to credible sources, Melanie amassed a total net worth of $500k over the course of her nearly decade-long career. She serves as an anchor, sideline reporter, and entertainment host in the same way.

As of now, Melanie Collins seems to be enjoying her career and relationships. The blonde beauty has amassed a sizable social media following by posting images and videos of herself wearing some of the most fashionable clothes, such as the one shown above. She always manages to dress to impress, whether she's on the football field or at a party with close friends. She's also flaunted some incredible swimwear while basking in the summer weather. She is truly a sensation for sports fans.