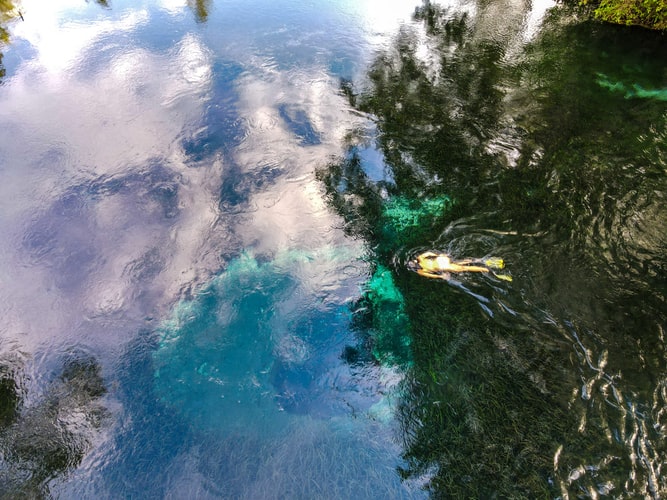 View a map of Springsheds in the Tallahassee region to understand how groundwater flows to Wakulla Spring and learn about human impacts within the spring shed.

Residents in the Tallahassee region have access to an abundance of clean groundwater for drinking and great springs, sinkholes, and spring-fed rivers for recreation. Caring for this natural resource is everyone's responsibility, and it begins by understanding spring sheds and how humans impact the aquifer and Wakulla Spring.

The source of water for Wakulla Spring and other springs in Wakulla and Leon counties begins as rainfall in its spring shed, an area of land extending hundreds of square miles from southern Georgia to the Gulf of Mexico. Rain seeps into the ground, and the underlying limestone aquifer, where it flows north to south and reemerges at Wakulla Spring. Along the way, the water's quality can be impacted by pollution and other human activities within the Springshed.

Almost all residents of Leon and Wakulla counties live within the Springsheds of Wakulla Spring and other area springs. Here the shallow limestone aquifer stores billions of gallons of water used for human consumption, agriculture, and manufacturing. Because the aquifer is shallow within the Springshed, particularly south of Tallahassee, it is vulnerable to pollution on the land surface.

Groundwater flows through the underground aquifer from north to south to Wakulla Spring, the Spring Creek system, and springs feeding the St. Mark's River. This groundwater is the same water we use for drinking, bathing, cooking, and watering our lawns and crops. There are many potential human impacts on the groundwater supply and the water flowing to Wakulla Spring. The sources of pollutants include fertilizers and pesticides used on lawns and in agriculture, stormwater runoff, and nitrates from municipal wastewater treatment and septic systems. These pollutants enter the shallow limestone aquifer during rainstorms and through numerous sinkholes located throughout the region.

The Cody Scarp is an ancient shoreline left behind when sea levels were much higher than they are today. Tallahassee residents know the Cody Scarp as the series of hills that descend when traveling south from the city toward Wakulla County. The landscape south of the scarp is known as the Woodville Karst Plain, where the limestone aquifer is shallow and exposed in many places. This is the primary recharge area for Wakulla Spring and where the aquifer is most vulnerable to pollution on the land surface.

Impacts In The Springshed

There are many human impacts within Wakulla Spring's springshed. Click on the map image at the left to learn about some of the impacts. The numbers on the map correspond to the impacts described below. 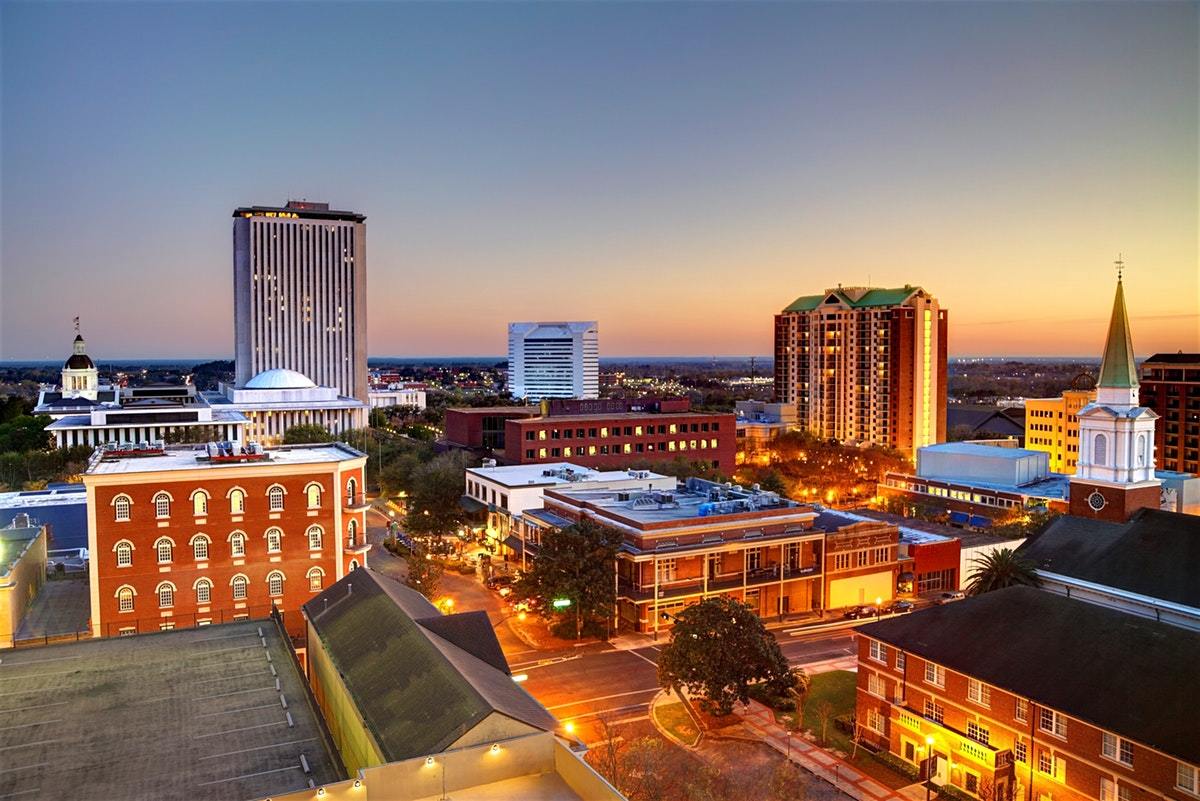 The State Capitol Building is at the center of the city of Tallahassee, which has experienced significant growth in recent years. The growth has brought increased demands for water and changes in land use, which negatively impact the aquifer within Wakulla Spring's springshed.

Florida State University's Doak Campbell Stadium is a major landmark in Tallahassee. Stormwater carrying pollution from streets and lawns flows from FSU and much of central Tallahassee south to Munson Lake and then into sinkholes where it enters the aquifer. 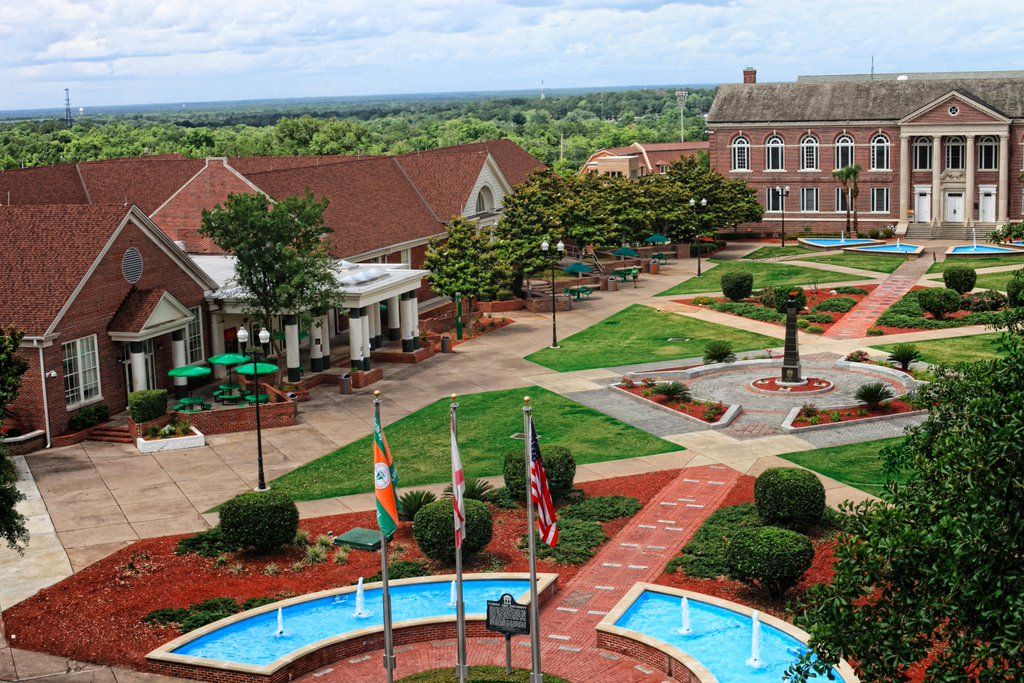 Stormwater flowing from Florida A&M University's 400-acre campus travels to Munson Slough and Munson Lake before flowing into sinkholes farther south where it enters the aquifer. 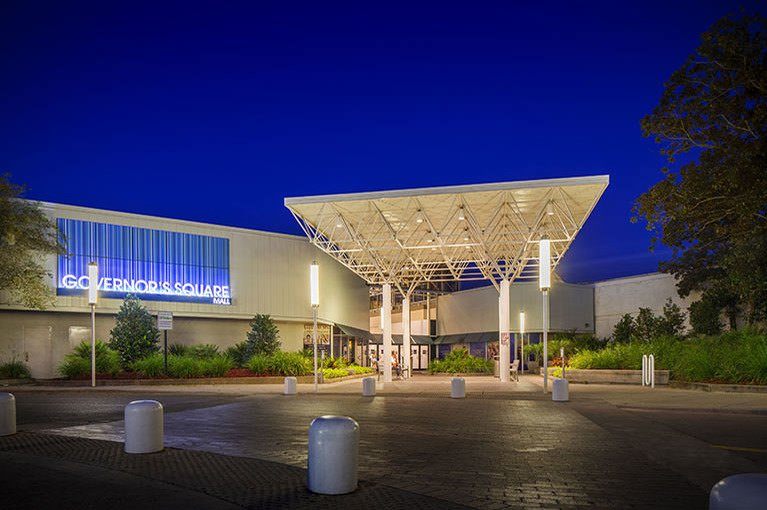 Even though it is located 15 miles from Wakulla Spring, a popular shopping area like Governor's Square Mall is within Wakulla Spring's springshed. Stormwater runoff from areas around the mall can enter the aquifer and eventually flow south in the groundwater toward Wakulla Spring. 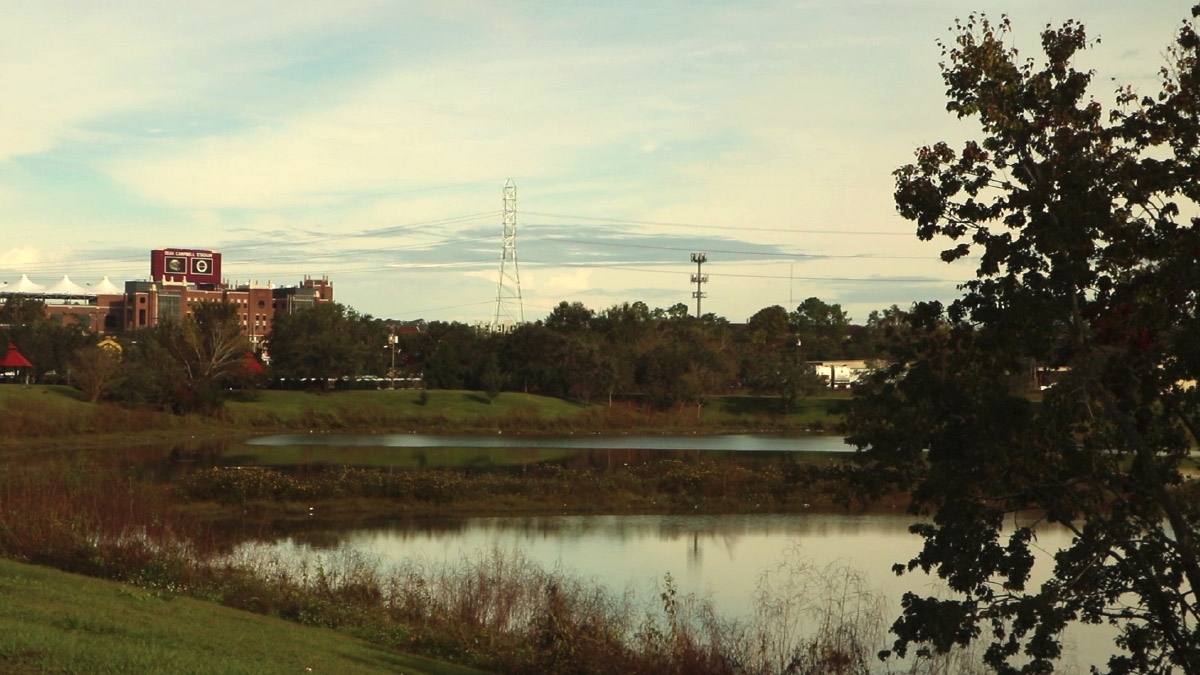 The Elberta Crate Regional Stormwater Facility (Elberta Lake) is a retention pond for urban stormwater. Some pollutants and trash carried along with stormwater are diverted and contained. However, during heavy rainfall events, the stormwater bypasses Elberta and flows directly to Munson Slough and Lake Munson. 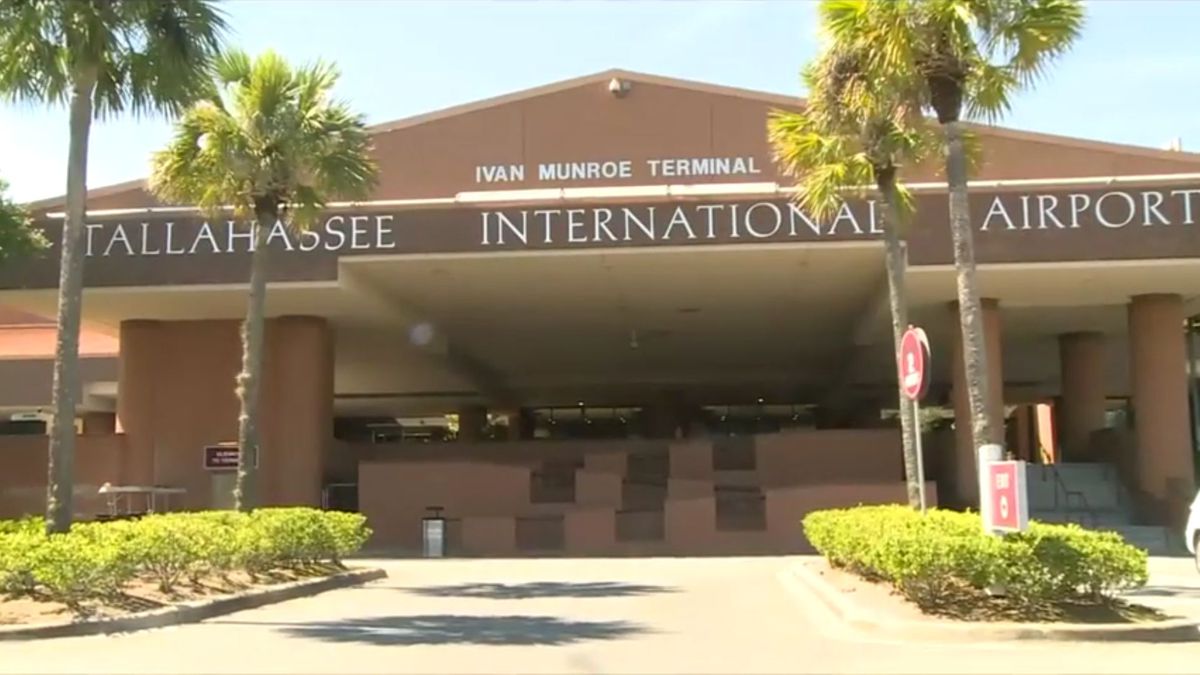 The Tallahassee Regional Airport is located at the western edge of Woodville Karst Plain, close to major sinkholes, underground tunnels, and caverns in the aquifer that have been explored and mapped. Groundwater flows under the airport toward Wakulla Spring. 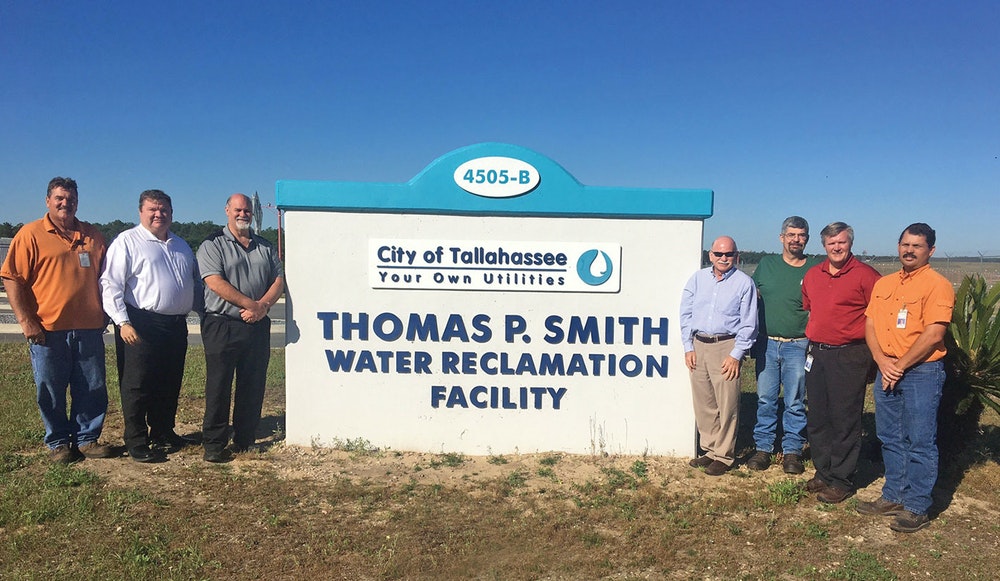 On average, each Tallahassee resident uses 160 gallons of water every day. This growing demand for water stresses the aquifer and also challenges the city to treat and dispose of the wastewater. The Thomas P. Smith Water Reclamation Facility is Tallahassee's main sewage and wastewater treatment plant. 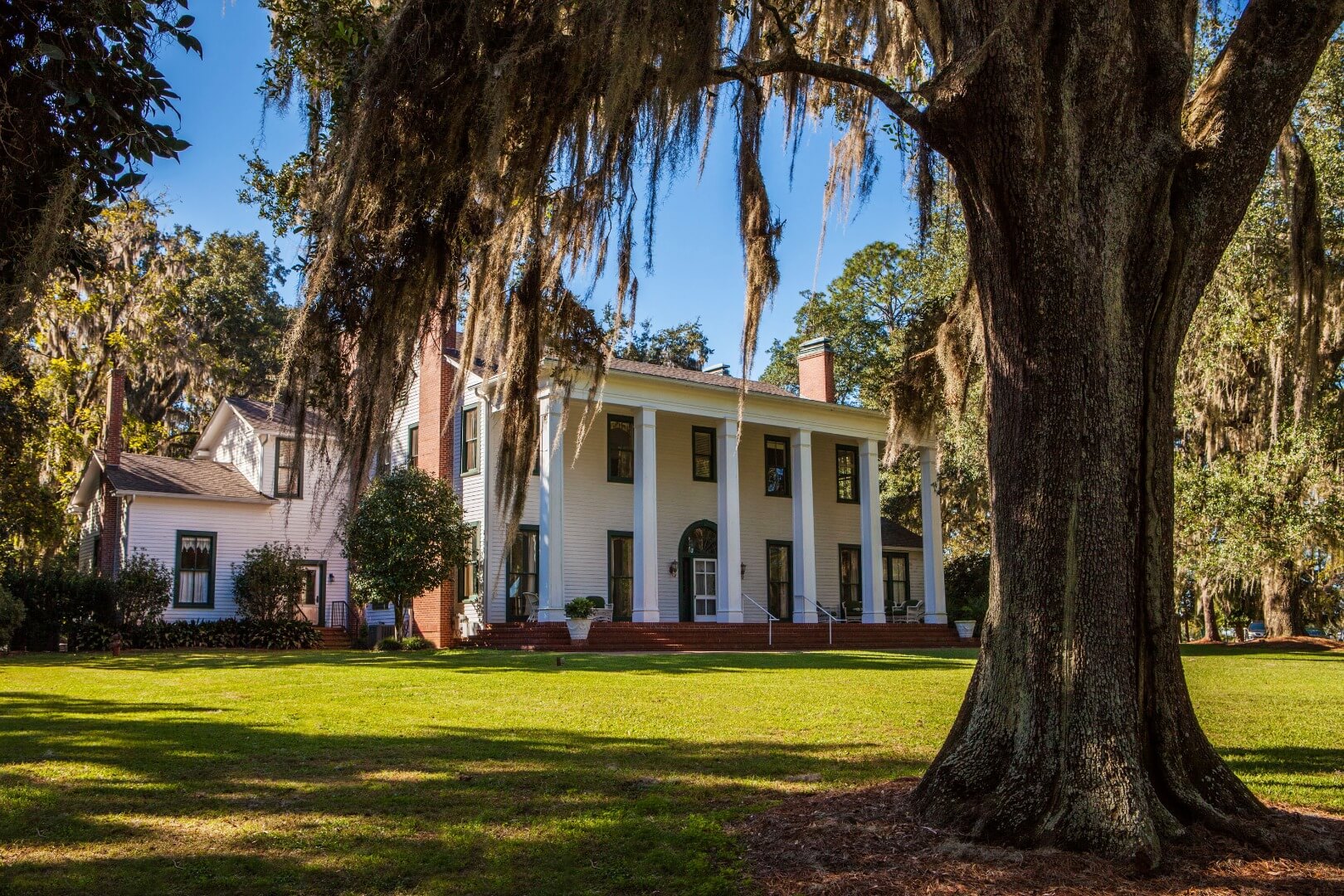 New developments such as Southwood represent significant changes in land use in areas that were undeveloped open space or agricultural lands. Increased stormwater runoff from new developments in vulnerable areas of the springshed can introduce pollutants, including lawn fertilizers, into the aquifer. Groundwater flows south under Southwood toward Wakulla Spring. 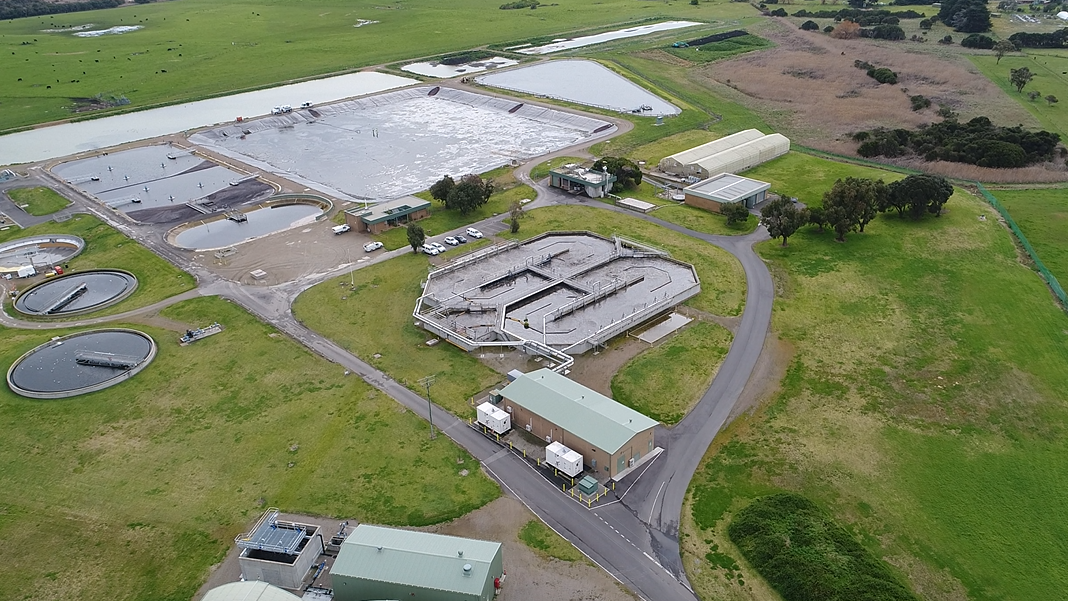 Each day, 17 million gallons of treated wastewater are pumped to the 2,160-acre Southeast Farm to irrigate crops. The Southeast Farm is located in a vulnerable area of the springshed, and there is evidence that nitrates not used by crops wash into the aquifer. Research is ongoing to determine where the wastewater flows once it enters the aquifer. Even low levels of nitrates discharging from the spring can impact spring ecosystems. 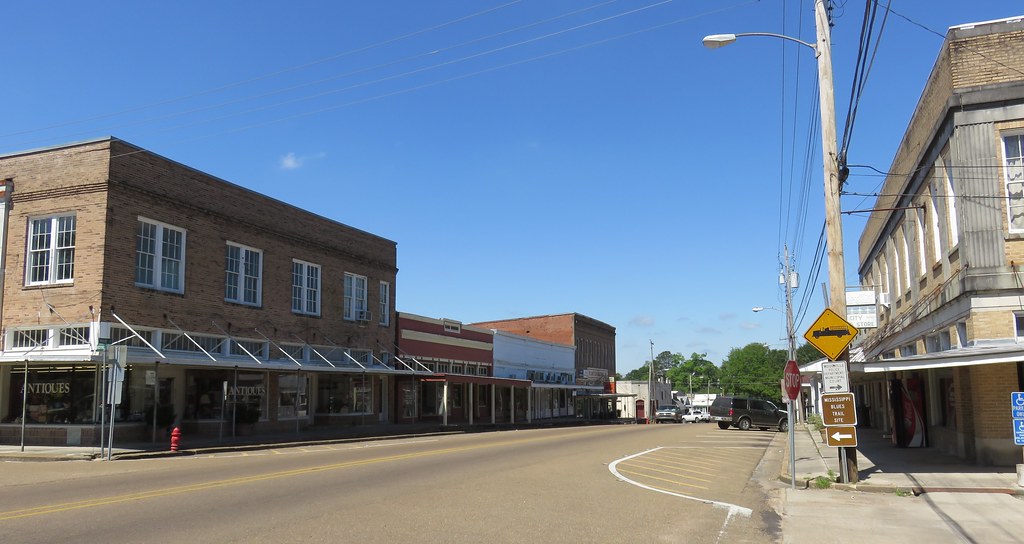 The majority of Woodville's more than 3,000 residents have homes served by on-site septic systems located in the most vulnerable area of the Wakulla Spring spring shed. Most homes and septic systems here sit only a few feet above the aquifer and groundwater table. It is critically important to properly maintain newer septic systems and update older systems. 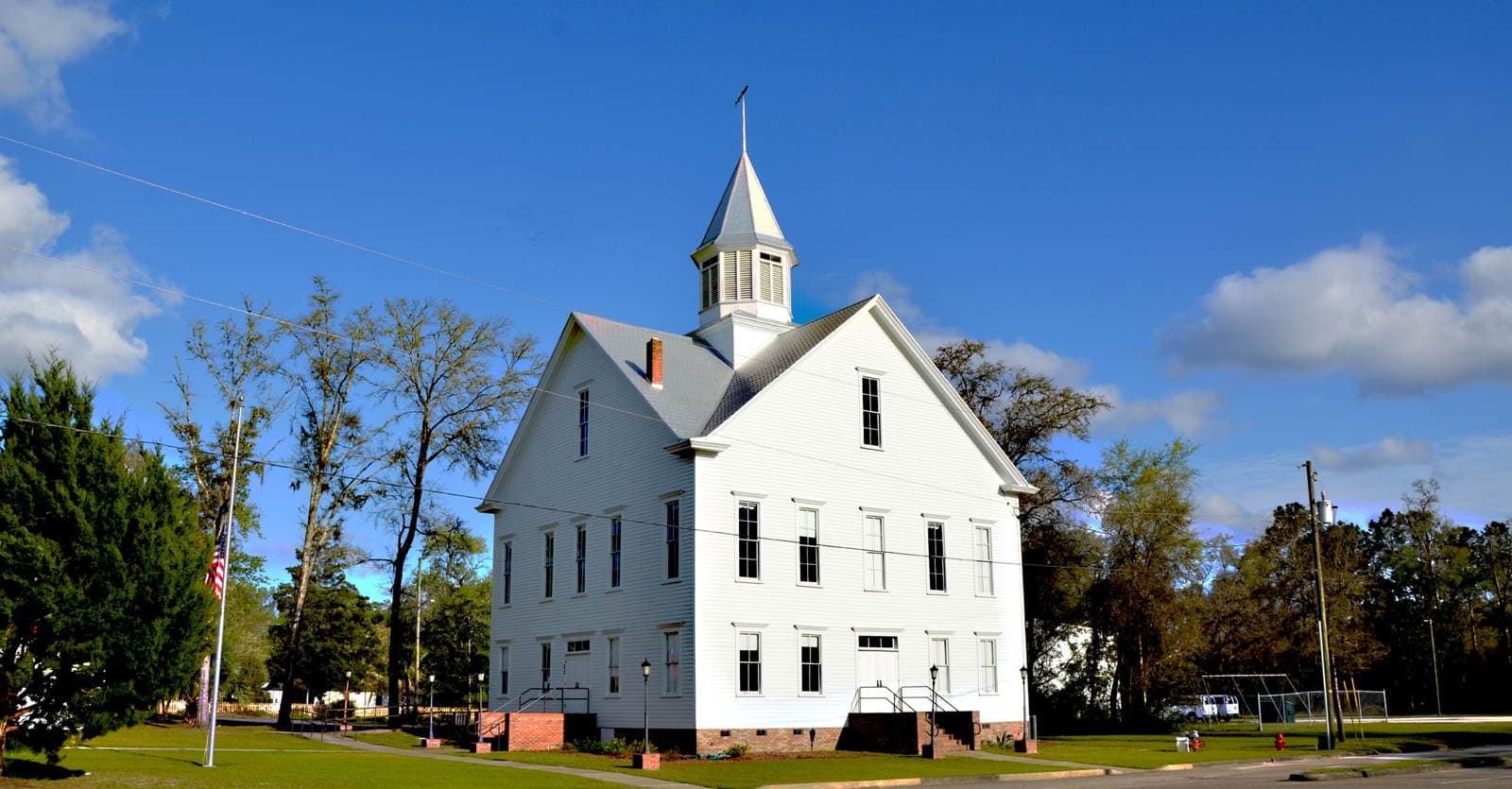 Crawfordville is the county seat of Wakulla County, which has more than 23,000 residents. Development pressures challenge Wakulla County Commissioners to make land-planning decisions that will protect the spring shed.

Natural Features In The Springshed

Click on the map image at the left to learn about the springs, sinkholes, and other natural features that are connected to the aquifer. The numbers on the map correspond to the features described below. 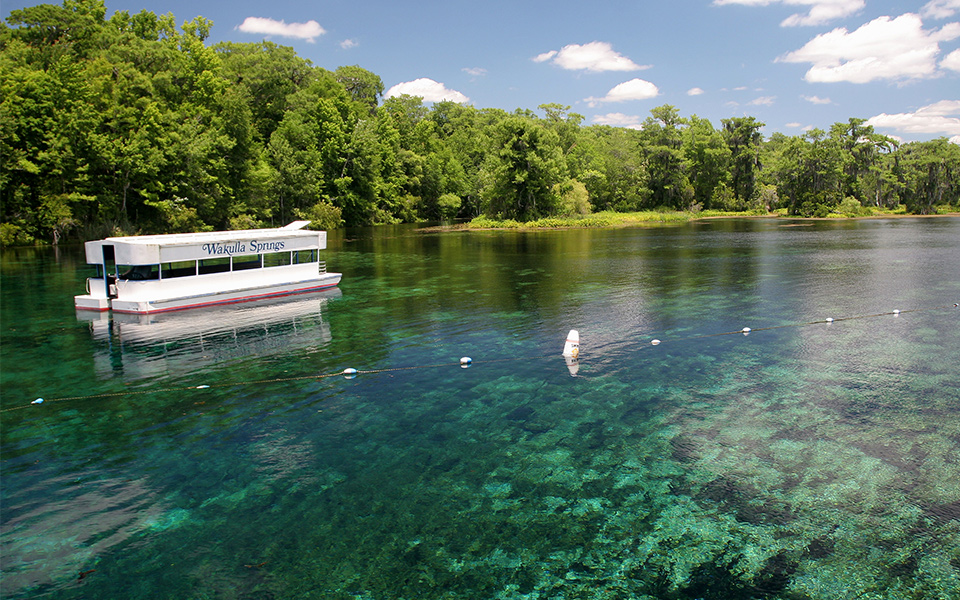 At the Edward Ball Wakulla Springs State Park, an average of 250 million gallons of water flows from Wakulla Spring each day, making it one of the largest freshwater springs in the world. The greenish color of the water shown here is a result of increased stormwater runoff and dark, tannic water infiltrating the aquifer and increased algae growth in the spring. This "dark water" condition prevents the park's glass-bottom boats from operating much of the year. 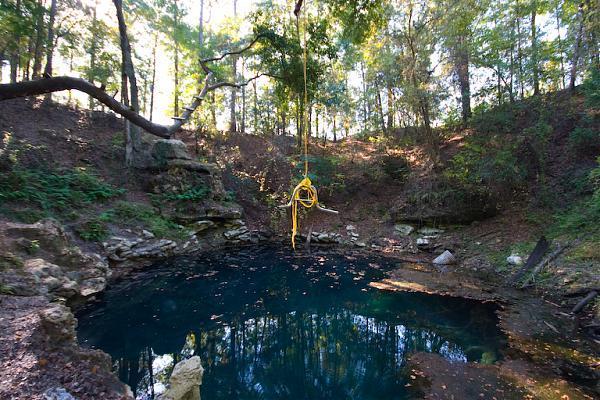 Church Sink is located three miles south of the State Capitol Building. This dramatic geologic feature is 60 feet below the surrounding land surface. Crawfordville Road, a major urban road, is just 50 feet from the edge of the sink. Runoff from the road threatens this sink, which connects to the aquifer. 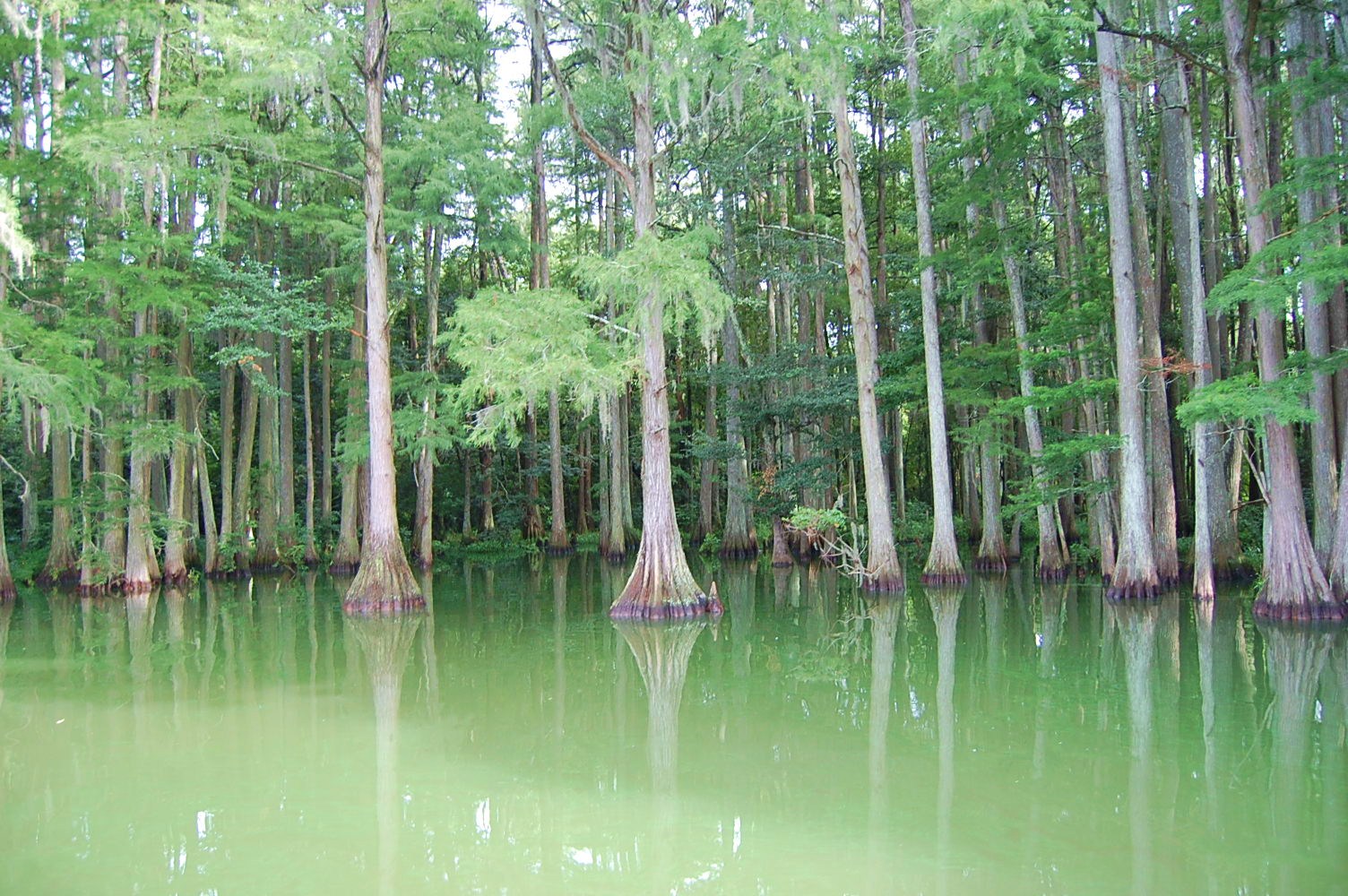 This 255-acre lake receives more than 50 percent of urban Tallahassee's stormwater runoff. For years, Lake Munson has ranked as one of Florida's most polluted lakes. Water flowing out of Lake Munson continues south to Eight Mile Pond, Ames Sink, and other sinkholes where it drains into the Floridan aquifer. 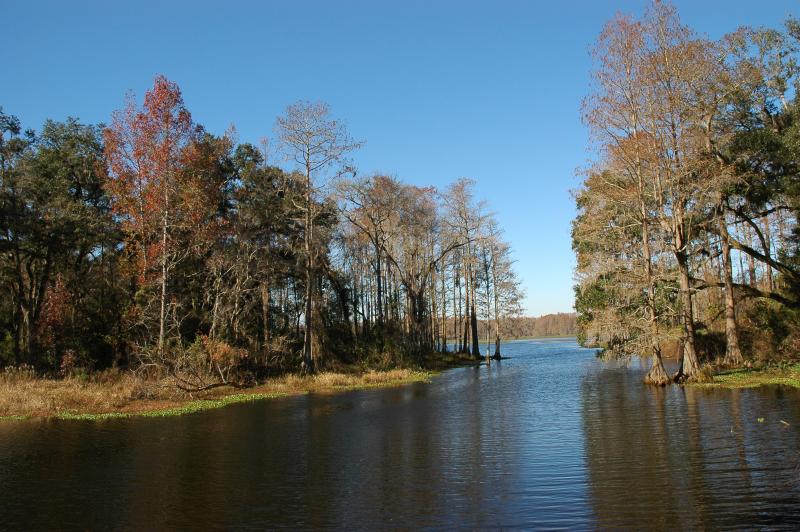 Once a naturally flowing stream, Munson Slough is now primarily a conduit to carry stormwater from central Tallahassee. Water flowing through Munson Slough to Lake Munson is seriously degraded by urban stormwater runoff. 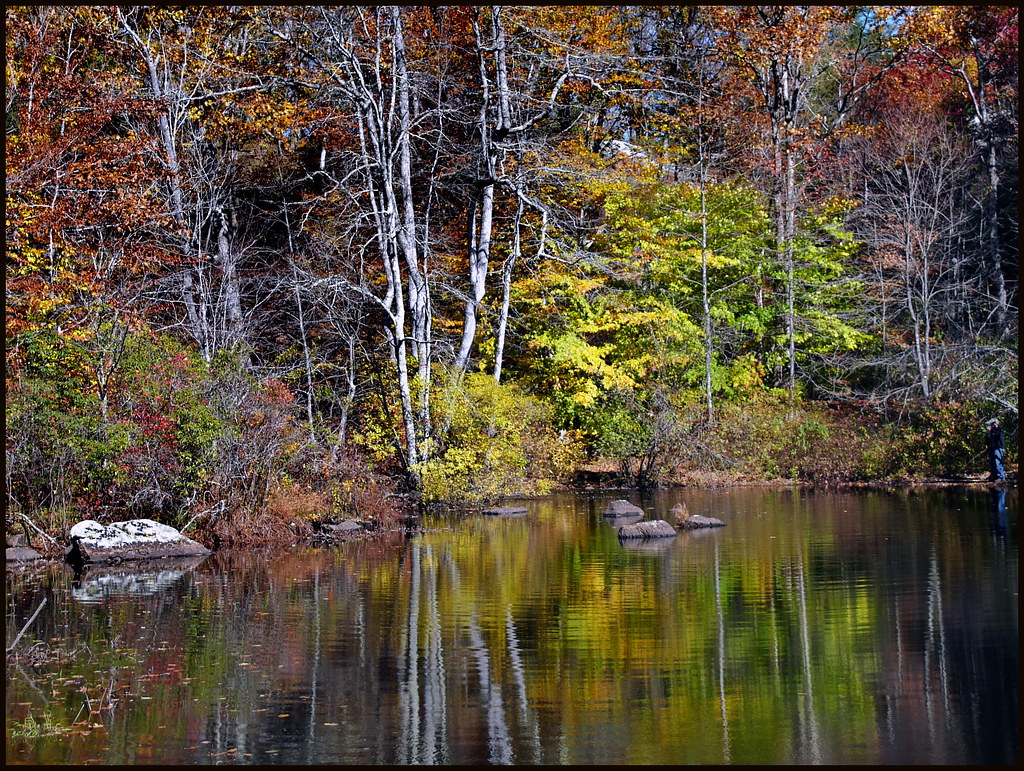 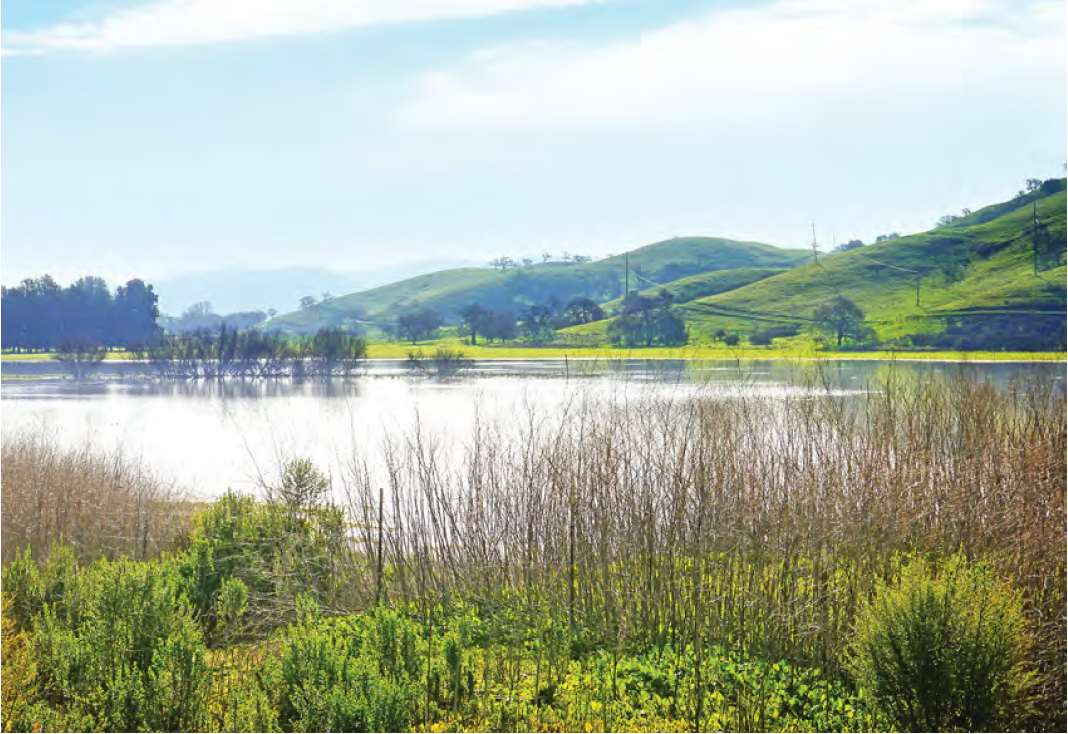 Located in the Apalachicola National Forest, Fisher Creek is one of a number of disappearing streams that end in large sinkholes. Other sinking streams include Black Creek and Lost Creek. Naturally dark, tannic water, as well as stormwater runoff, flows in Fisher and other creeks and then disappears into the aquifer. Dye trace studies at Fisher Creek sink have linked the flow of water in Fisher Creek to Wakulla Spring. 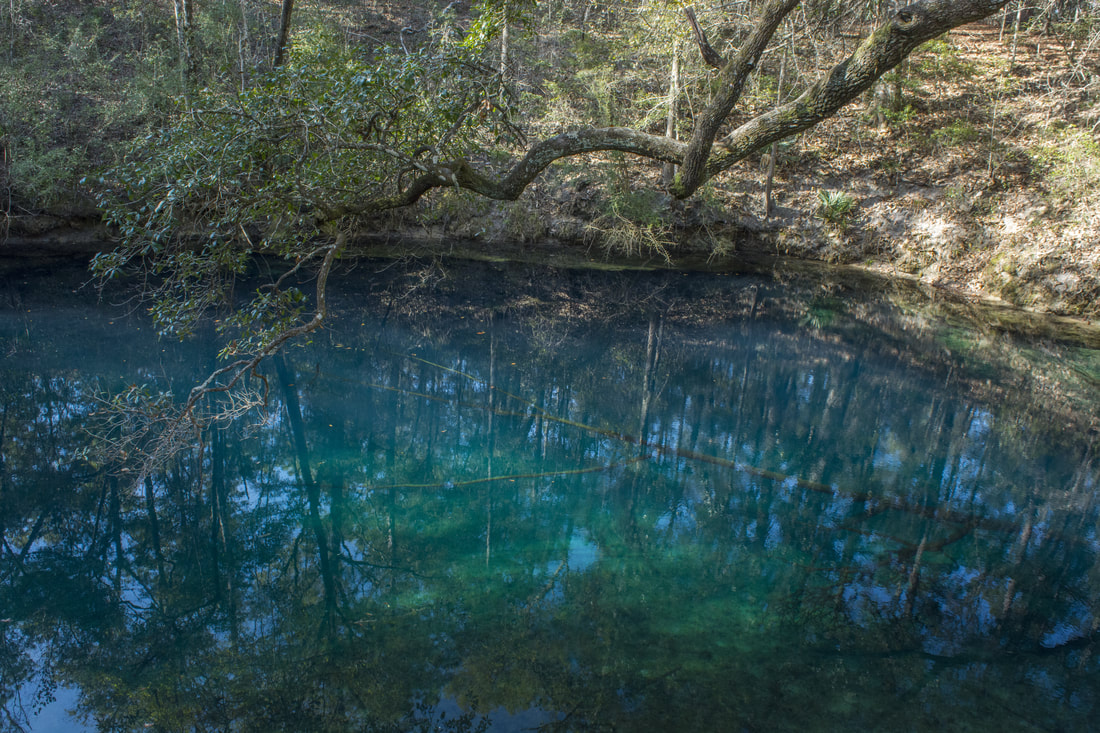 Hammock sink, also known as Little Dismal sink, is one of several large sinkholes that are part of the Leon Sinks Geological Area located about eight miles from the State Capitol Building. Divers participating in the Woodville Karst Plain Project have explored and mapped more than 10 miles of cave systems that link the sinks together. Dye trace studies have also linked Leon Sinks with Wakulla Springs. 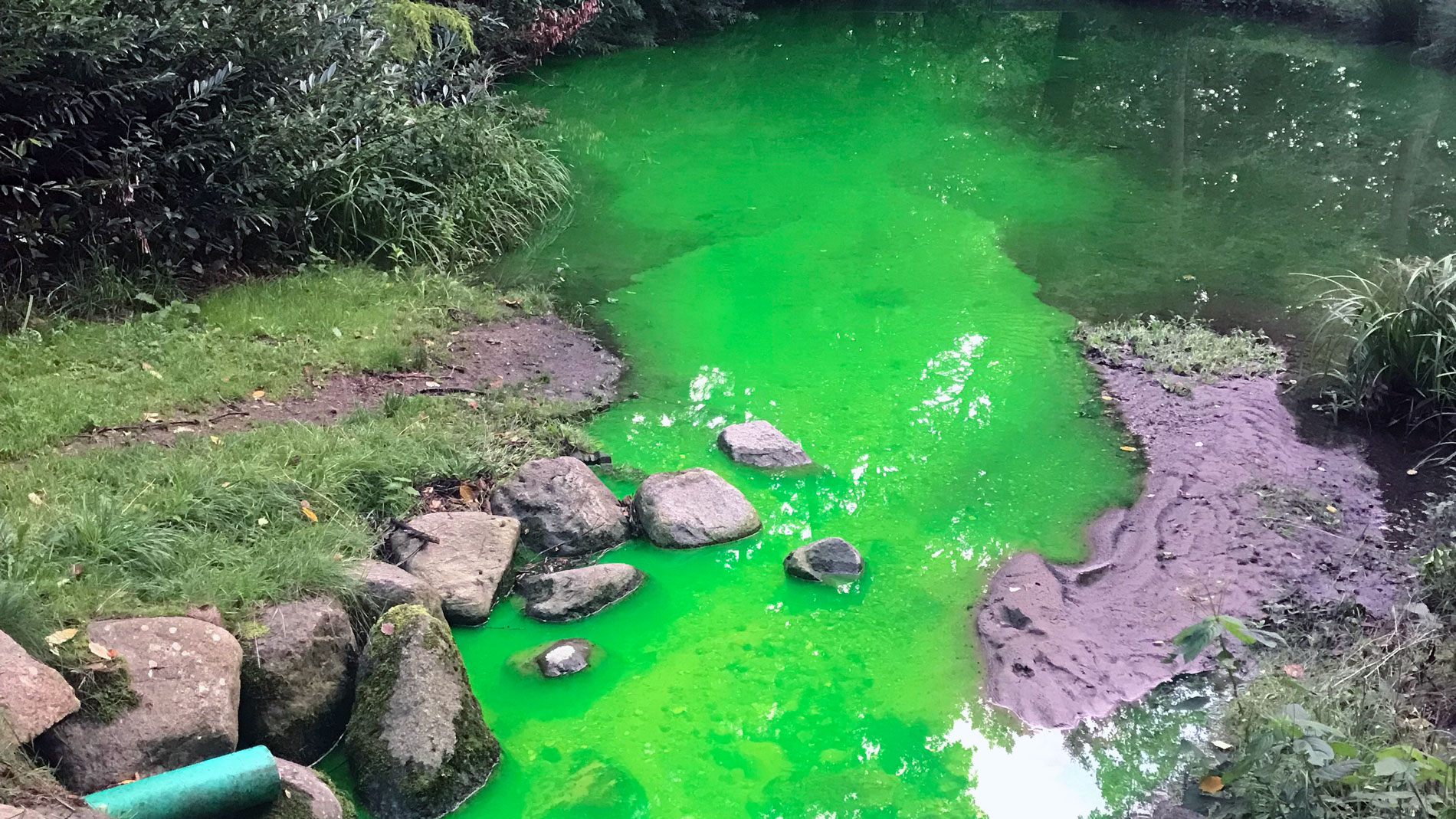 Ames Sink is the final above-ground destination for much of Tallahassee's stormwater runoff. Water flowing from Munson Lake and Munson Slough reaches Ames Sink where it drains into the Floridan aquifer. From Ames Sink, it travels underground and reaches Wakulla Springs about three weeks later. 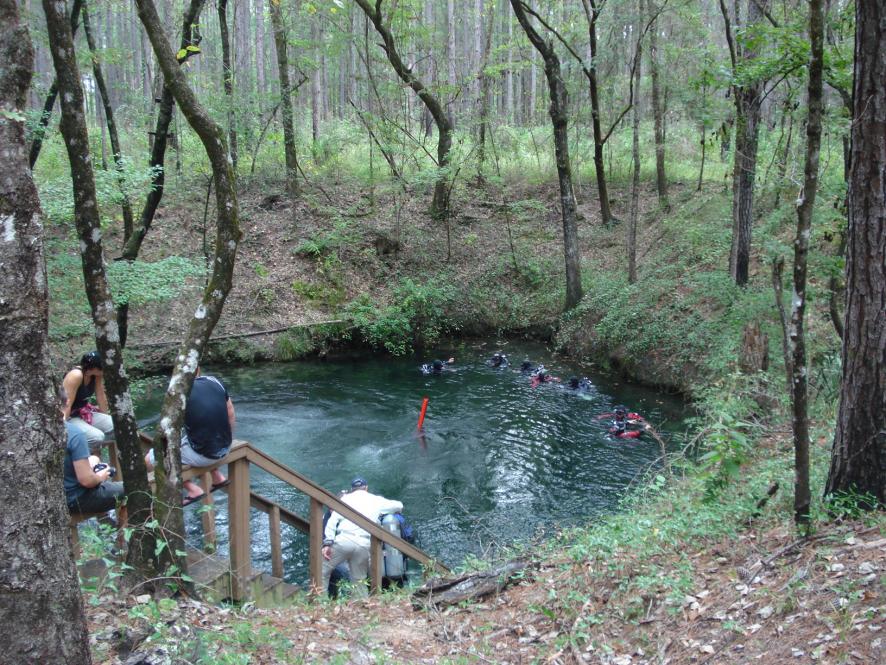 The Woodville Karst Plain is a unique geologic region that extends south of the City of Tallahassee to the Gulf of Mexico. Here, the limestone aquifer is very shallow. The landscape features numerous sinkholes, springs, open "windows" in the limestone that expose groundwater at the land's surface, and miles of unseen caves and tunnels. Wakulla Spring is the largest, single spring in the Woodville Karst Plain. 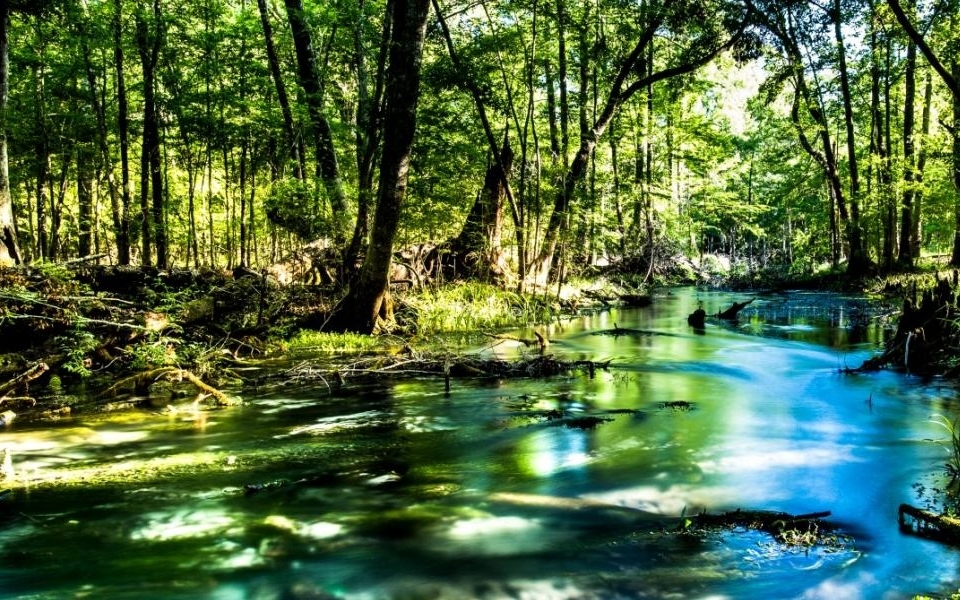 The St. Marks River disappears underground for several hundred feet and then reappears. This "river rise" is a unique geologic feature highlighting how shallow the aquifer is in Wakulla County. 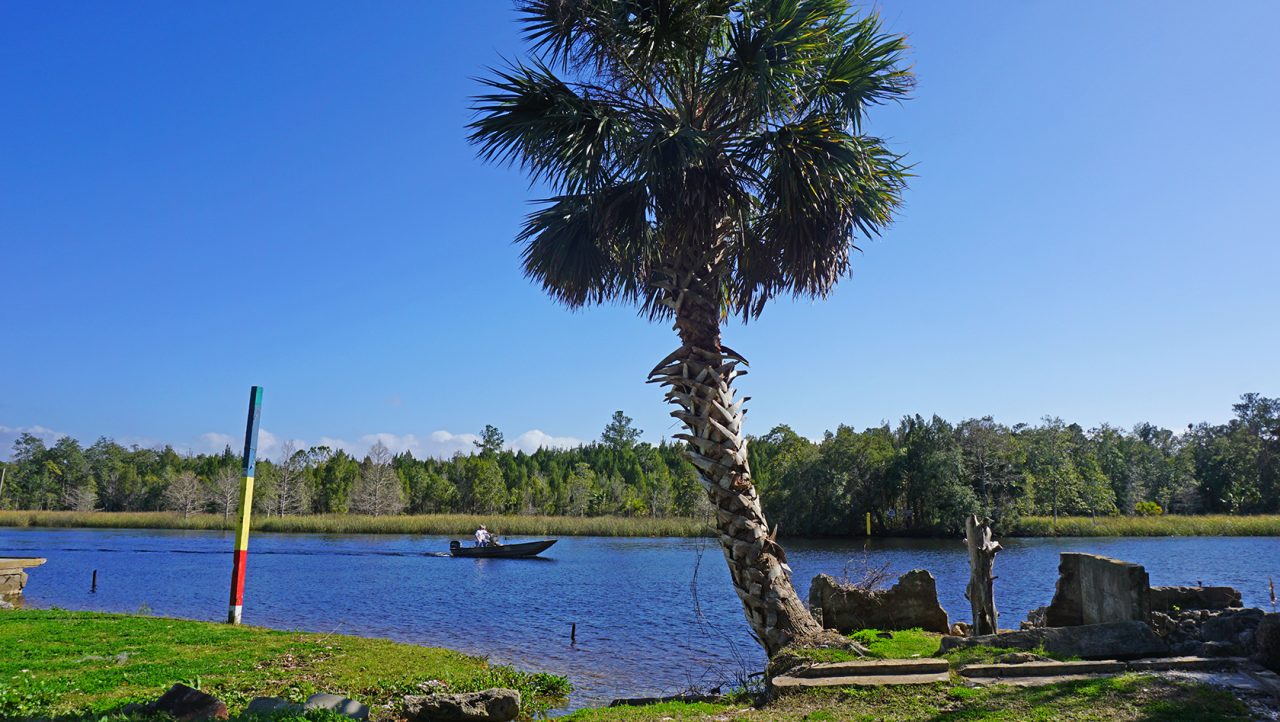 The St. Marks River originates in the swamps of the Red Hills area north of Tallahassee and flows for 35 miles before emptying into Apalachee Bay in the Gulf of Mexico. The St. Marks River is designated an "Outstanding Florida Water" by the Florida Department of Environmental Protection. Its flow is heavily influenced by springs that flow into it along its length. 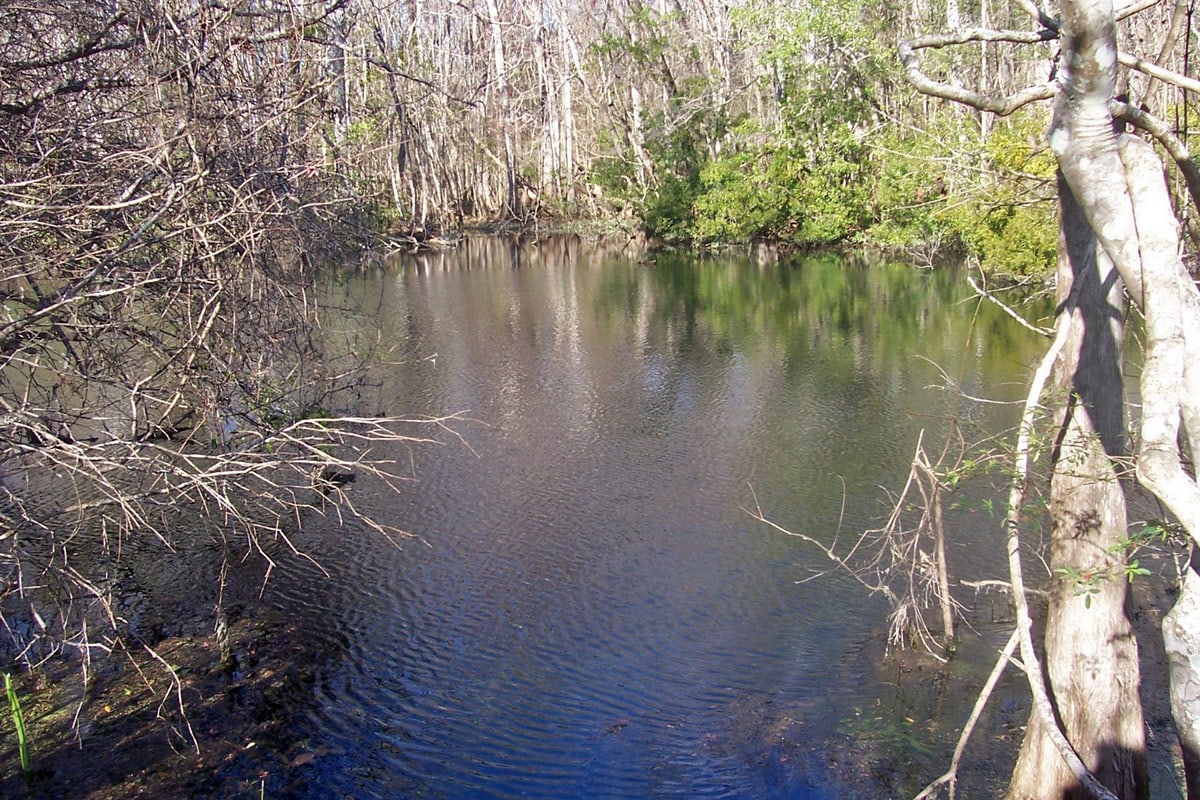 Sally Ward Spring is a large spring located just inside the entrance to the Edward Ball Wakulla Springs State Park. Sally Ward flows into the Wakulla River downstream from Wakulla's mainspring basin. Dye trace studies have linked Sally Ward Spring with Ames Sink and other sinkholes to the north. 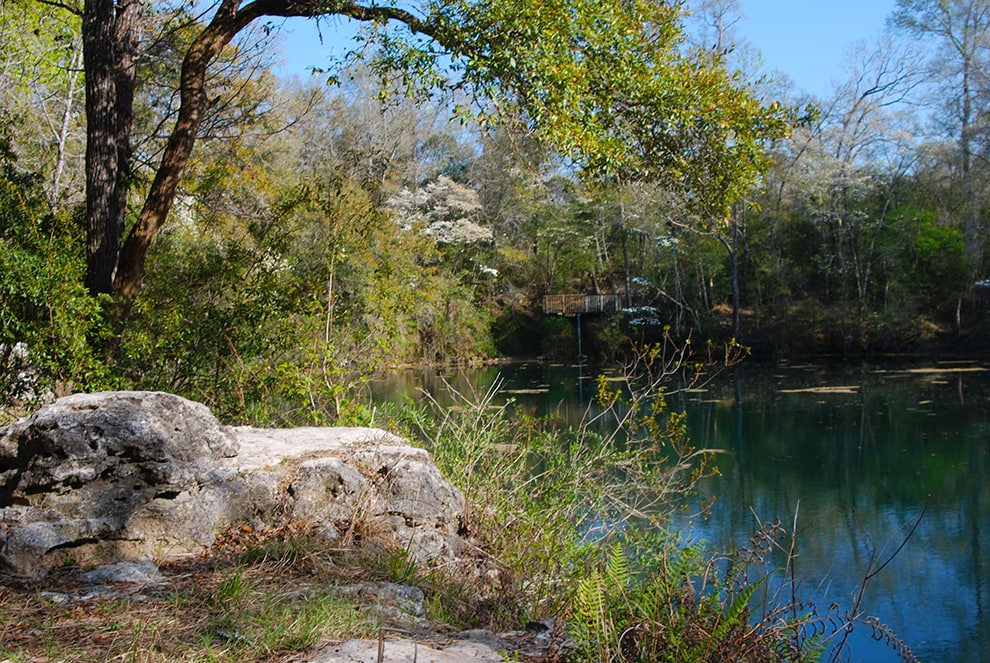 Cherokee Sink is part of the Edward Ball Wakulla Springs State Park and has been used as a popular swimming hole and picnic area for many years. Acquired by the state in 1999, work has focused on restoring Cherokee Sink to a more natural state. Recent clean-up efforts have resulted in the removal of an abandoned car and boat, trash, and other debris dumped in the sink over the years. 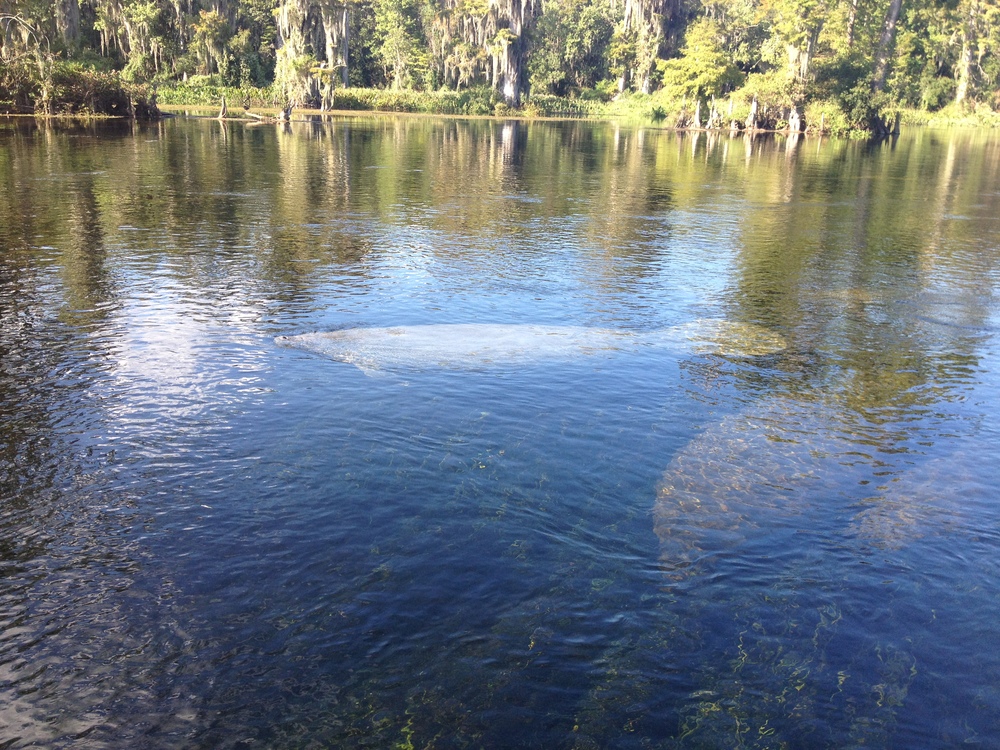 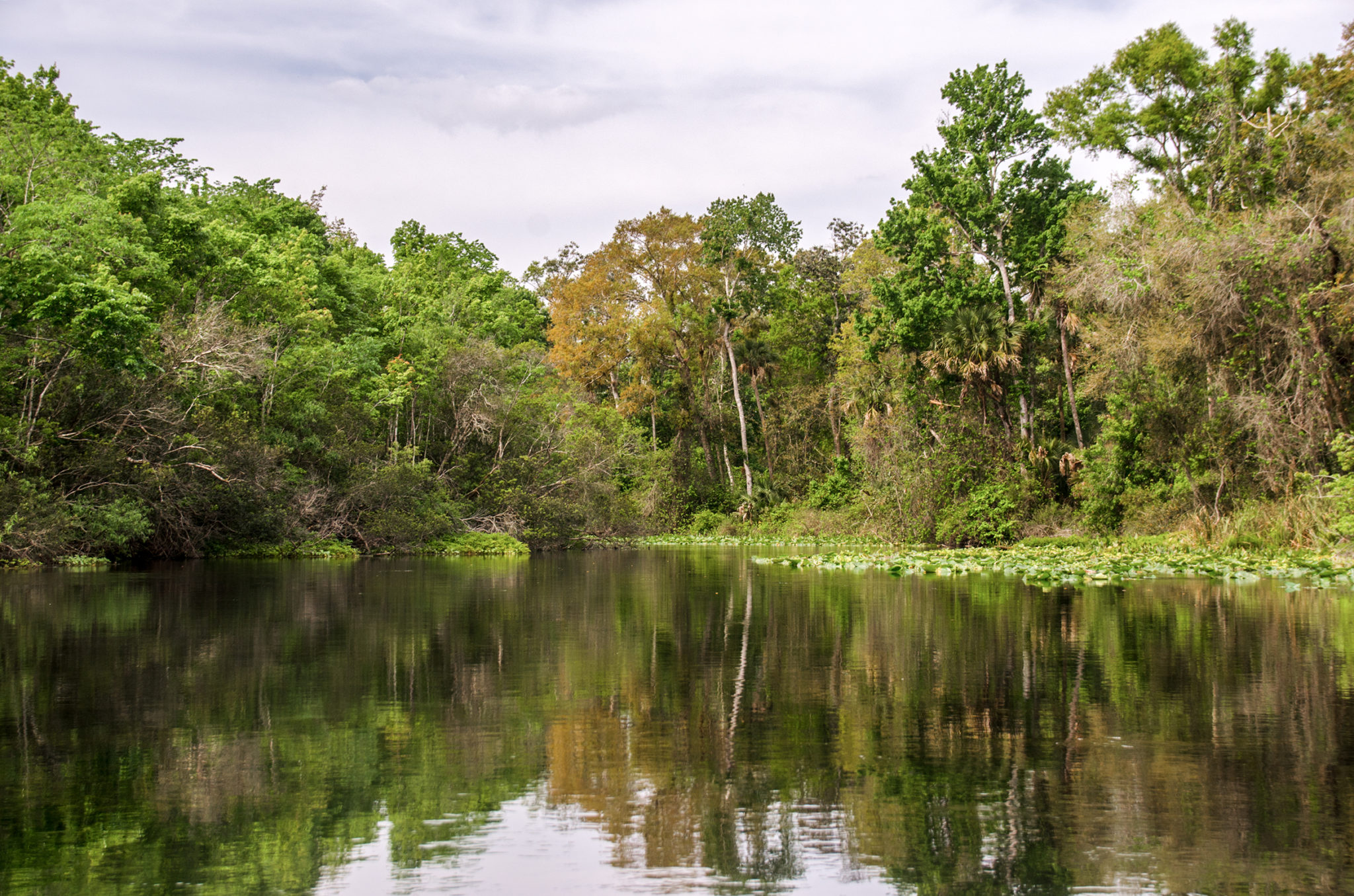 Spring Creek Springs is a group of 14 submarine springs that discharge at the mouth of Spring Creek in the tidal marsh area along the Gulf of Mexico. These springs discharge in excess of one billion gallons of water each day, greater than any other springs group or system in Florida. It is believed by some researchers that the Spring Creek Springs system is connected to the Wakulla Spring tunnel and cave system.