This Video Shows Why Flash Floods Are So Bad After Heatwaves

As the heatwave gives way to heavy rainfall, forecasts for many parts of the UK include thunder, lightning, and flooding.

In this article, you will see the video showing why flash floods are so bad after heatwaves.

According to the Environment Agency of England, the Scottish Environment Protection Agency, and Natural Resources Wales, 33 flood alerts are currently in effect throughout Britain.

Flood warnings have been issued for much of Scotland, and there are worries that the Thames will overflow and cause havoc in London.

Sadiq Khan, the mayor of London, stated that there are efforts by Transport for London to "ameliorate any result of flash flooding" after last year's flooding of the Tube and other networks.

But why is heavy rain so dangerous following a heatwave?

Is it a good thing that the drought is constantly in the news?

What Is A Flash Flood?

Before we get into the details, let's explain what flash floods actually are.

A flash flood is an unexpected local flood that can quickly affect low-lying areas.

Heavy rain, thunderstorms, hurricanes, tropical storms, and meltwater from ice or snow can all result in them. 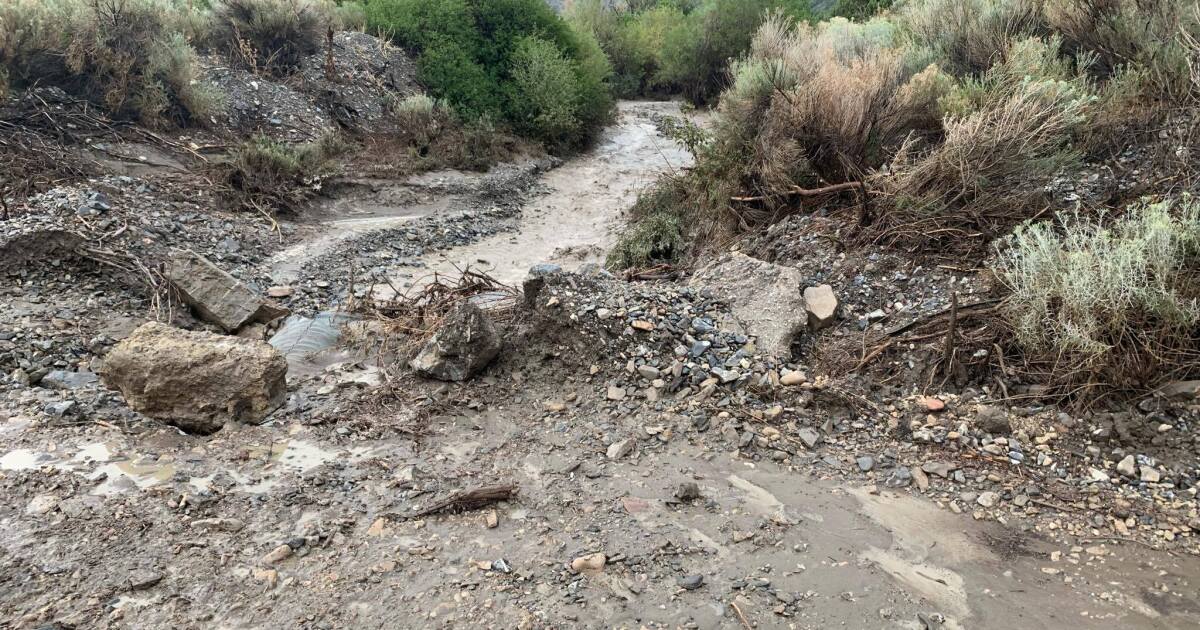 How Does Drought Lead To Flash Flooding?

This summer, the UK has had two heatwaves that broke records, with one reaching temperatures of more than 40C.

Additionally, there has been an extremely low quantity of rainfall, which has left the soils across the nation skeletally dry, scorched by heat, and rock solid.

Usually, when rain falls to the ground, it is absorbed by the soil, and much of its nutrients are absorbed by plants through their roots.

But currently, soils are more or less like pavement, so rain bounces off and collects on the surface.

If these areas are on slopes, when severe rain falls, the rain can instantly rush down and cause flash floods.

Due to the heat, there is also a lot less grass and vegetation to absorb this water.

Video Showing Why Flash Floods Are So Bad After Heatwaves

This concept was expertly demonstrated by a recent Twitter video that became popular last week (below).

Using three upside-down glasses of water on three distinct grass surfaces - wet grass, regular summer grass, and grass following a heat wave - Dr. Rob Thompson, a meteorologist from the University of Reading in the UK, performed a fascinating experiment and tracked how quickly each glass of water drained.

While the grass you would ordinarily see during a "normal" summer slowly but gradually drained, the glass on the moist grass swiftly gulped down.

However, the scorched grass that followed a heatwave scarcely allowed any water to pass.

Look no further than Death Valley, which holds the record for the planet's hottest air temperature, to see how this may look in the real world.

Around 3.71 cm (1.46 inches) of rain fell in less than three hours in the Death Valley National Park's Furnace Creek area earlier this month, making up nearly 75% of the region's usual annual rainfall.

As a result, there were severe floods, flooding on the highways, and extensive water damage.

A meteorologist with the National Weather Service Las Vegas, Daniel Berc, said in a statement that the torrential rain that caused the deadly flooding in Death Valley was a once in a thousand event.

We shouldn't anticipate this kind of flash flooding in the world's driest regions because Death Valley is a place of extremes.

However, it is obvious that drought and flash flooding will certainly become more frequent and severe as a result of climate change in the years to come.

Professor Richard Allan commented on the current drought in the UK:

Dr. Thompson retorted, "It gets compacted via the lack of water."

However, a significant component that prevents water molecules from passing through the tiny gaps is that the minute soil particles have a tendency to become hydrophobic (like the coating on waterproof coats).

Another user added: "Dry earth doesn't absorb water as quickly, even if it seems counter-intuitive. Flooding is thus made more likely by the worsening of heatwaves, droughts, and heavy rain brought on by climate change."

After summer thunderstorms, residences outside identified high-risk flood zones may also be impacted.

Because we have all paved over our roadways, surface water flooding is a serious concern.

Water rushes to the ground as soon as it touches it.

Additionally, the risk of flooding will be much more significant due to how dry it is.

Even though it pays for everyone to be ready, it can be helpful to determine whether your home is particularly vulnerable to flooding.

If you reside in England, visit the Gov.uk website to learn more about flooding there or in Wales, Scotland, or Northern Ireland.

Steps You Can Take To Protect Your Home

Even at the last minute, there are things you can take to protect your property and yourself against flooding.

These are affordable and simple to fit.

The traditional method of flood defense is to place sandbags.

They're worthless and a danger to the environment, Mary counters.

Instead, she suggests investing in flood sacks to complete the same task.

The speaker claims that these can each hold 21 liters of water and are available online.

Your door should have them on both sides.

Don't forget to move your car to a higher location as well.

Mary advises against having both a flooded house and a flooded car because that would result in two insurance claims and leave you helpless in the river.

Additional easy recommendations for preventing floods and dealing with its effects include: 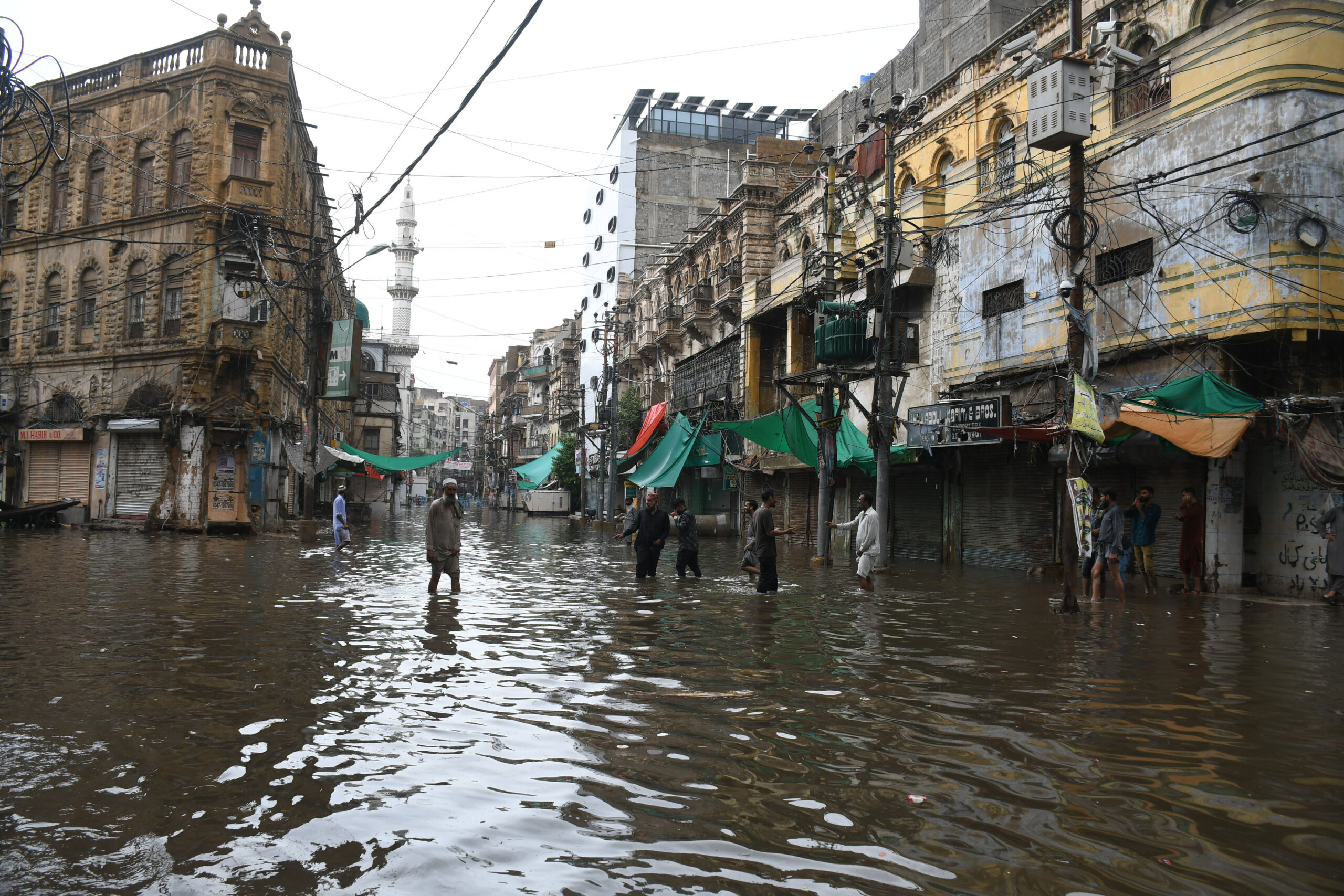 People walking through flood in the city

What Is The Cause Of The Problem Of Flash Flood?

The majority of flash flooding is brought on by thunderstorms that move slowly, repeatedly move over the same area or bring heavy rains from hurricanes and tropical storms.

On rare occasions, ice or floating debris may build up at a natural or artificial obstacle and impede water movement.

How Does Climate Change Cause Flash Floods?

The climate is warming as long as people continue to burn fossil fuels. Because the air is hotter, there is more water vapor present, the rain falls more heavily.

For decades, climatologists have predicted that heavy rain will become more frequent as the Earth warms.

What Are The 5 Effects Of Flash Floods?

Floods have serious societal repercussions for both communities and people. As most people are well aware, flooding has a number of immediate effects, including the loss of life, destruction of property, loss of crops and livestock, and worsening of health due to waterborne infections.

What Happens After A Flash Flood?

Roads may have been destroyed, there may be further floods in the future, and there may be a variety of hazards, both visible and invisible.

In order to organize the emergency response to these flash floods and mitigate their future impact, we need to draw on this rich library of knowledge, including the frequency of flooding in certain towns and even individual roads.

In order to manage the increased risk of floods that the future will bring, we may learn a lot from the past.