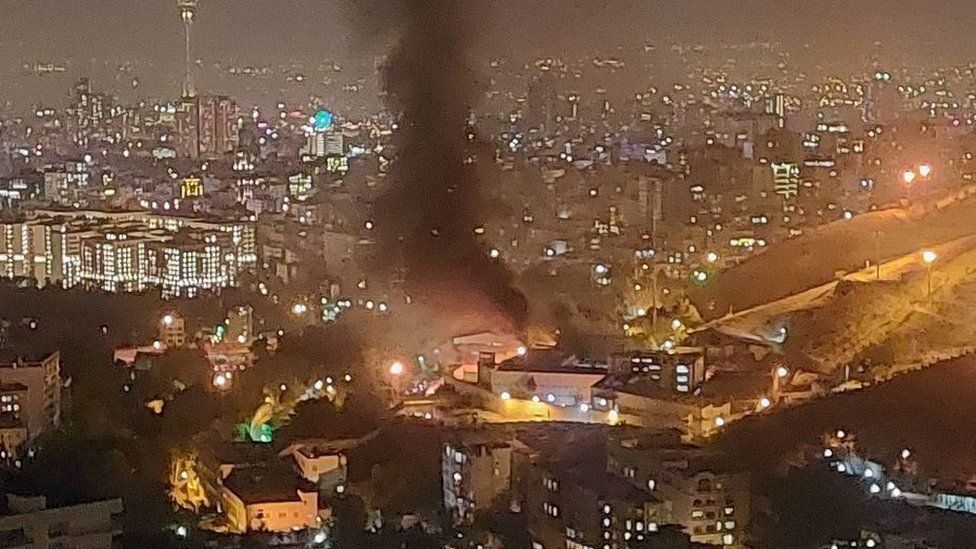 Evin prison fire is one of the headlines of an Iranian state news agency. Reports stated that a major fire at Iran's infamous Evin prison has resulted in the deaths of four inmates and injuries to 61 others.

BBC Persian has been informed by sources inside the prison, which is well-known for housing political prisoners, that the number of casualties is likely to be higher.

In videos that were shared online, smoke and flames could be seen billowing from the location in Tehran, and the sounds of gunfire and explosions could be heard. The fire started after several weeks of protests against the government across Iran.

Many of those who took part in the demonstrations have been arrested and taken to Evin prison. It is unknown at this time whether or not the situation at the jail has any connection to the protests.

See the video below.

The protests first erupted last month after the death of 22-year-old Kurdish Iranian Mahsa Amini in police custody. However, her family disputes this, stating that she was beaten by morality police before her death rather than having a heart attack as the official cause of death.

In a quote from an official who blamed "criminal elements" for the fire, state media has suggested that the events in Evin prison do not have any connection to the protests that are still going on.

The governor of Tehran's prison reported to state television that there was a riot in a wing of the prison housing petty criminals while he was speaking from inside the prison.

During this time, Iran's Mizan News reported that the injured suffered from breathing difficulties as a result of the fire that occurred in the sewing workshop of the prison. According to the report, four of those who were injured are currently in extremely critical condition.

Some journalists on social media have accused the authorities of "intentionally setting fire to the prison," despite the fact that a prominent political prisoner was released prior to the blaze taking place.

On Saturday evening, startling video footage of the fire and smoke was initially shared on social media for the first time.

People can be heard chanting "death to the dictator" outside the prison in several of the videos that were taken there. This is one of the primary slogans of the protest movement against the government.

Other videos contained audible sounds of gunshots and explosions, which prompted rights organizations to express their deepest concerns regarding the plight of the detainees.

Initial reports from the Iranian news agency Fars, which has ties to Iran's Revolutionary Guards, suggested that the explosions were caused by mines detonating following a prison break.

According to the information that was gathered, "some prisoners who attempted to escape amid the fire ended up in a minefield in the northern side of the prison."

However, later on, the agency stated that this was not the case at all, and they cited a source as saying that no prisoner had stepped on a mine.

After what appeared to be objects being fired into the prison from outside its perimeter, the sound of an explosion could be heard on a video that was uploaded to the internet.

According to BBC Persian, the family of a political prisoner stated that relatives and attorneys of detainees were not permitted to come within a certain distance of the prison last night, and roads were closed off.

Some prisoners' families reported being unable to contact their relatives by phone, and that the internet connection around the prison appeared to have been cut off.

However, some prisoners were later able to contact their families to inform them that they were safe.

Niloufar Hamed's husband said she was able to call him and he told her he was fine but didn't know what was going on in the jail. And Iranian-American dual national Siamak Namazi informed his lawyer that he had been moved to a secure area.

A former prisoner who spent 200 days in solitary confinement in the jail told the BBC that it must have been a terrifying experience for the prisoners.

"It's terrifying enough to be in that concrete cell, let alone with fire raging outside your cell, explosions happening, and gunshots," she said.

On Saturday night, Iranian state television broadcast a report depicting parts of the prison as safe and calm. However, exiled Iranian journalist Masoud Kazemi, who spent nearly a year inside Evin, claimed that the report only showed areas of the jail where the action did not take place.

Nazanin Zaghari-Ratcliffe and Anoosheh Ashoori, both British-Iranian dual nationals, were both held at Evin prison for several years on spying charges that they denied before being released earlier this year.

"I used to refer to it as the Valley of Hell, so you can imagine how dire the situation is there. Medical care is almost non-existent. They are surrounded by bedbugs, cockroaches, rats, you name it "On Sunday, Mr. Ashoori told the BBC.

Some foreign governments have expressed concern about their citizens who are being held in the prison. The US State Department said it was monitoring the situation with "urgency," while the UK government's security minister called it a "very worrying development."

Since Ms. Amini's death five weeks ago, a wave of protests has swept across Iran, posing the most audacious challenge to the Islamic Republic since its inception in 1979. Many of those who perished were teenagers.