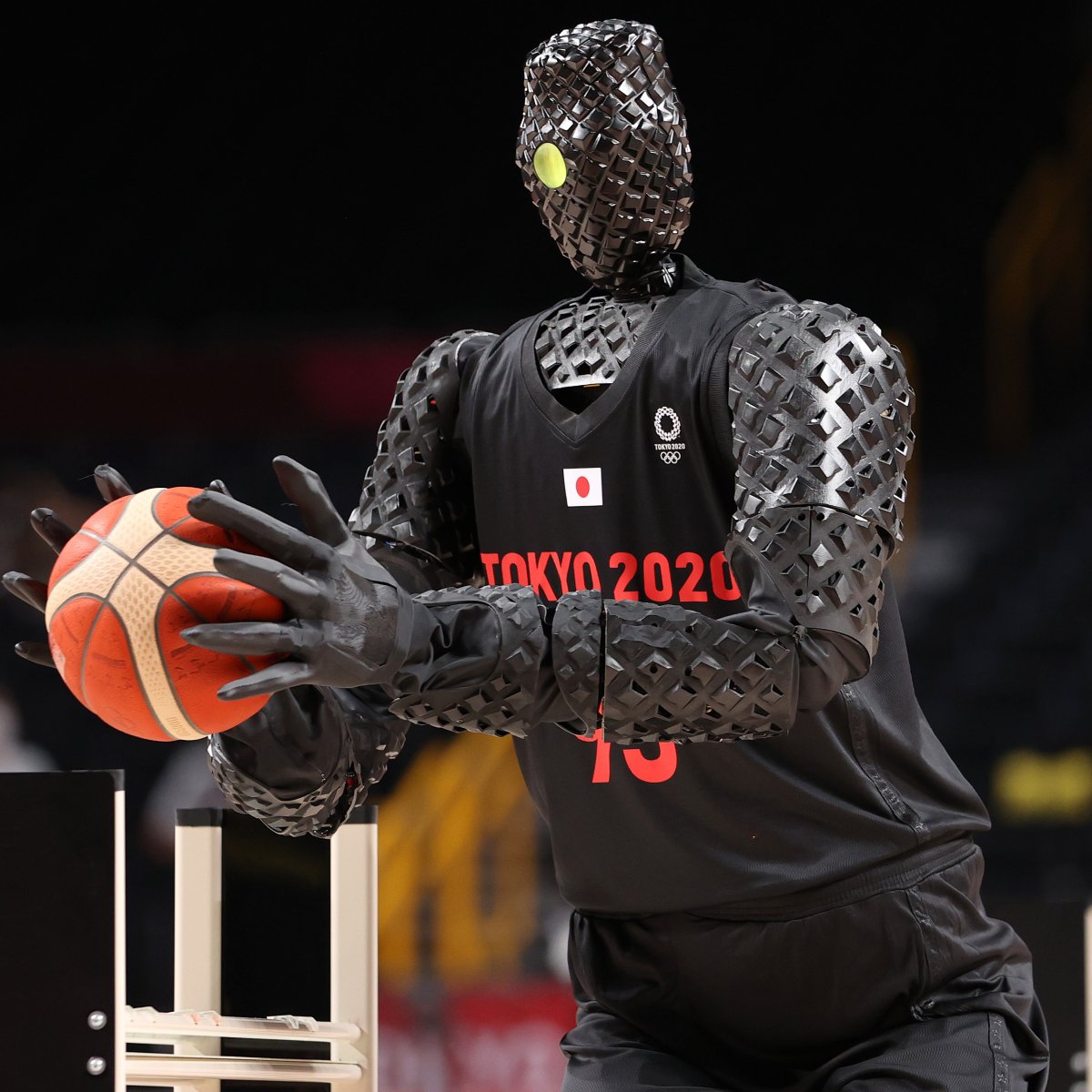 The Toyota CUE, basketball playing robot, was created by nine Toyota employees who volunteered their time in the Frontier Research Department of the Toyota Central Research and Development Labs in Japan.

During the halftime break of the basketball game between the United States of America and France that was being played in the Tokyo Olympics in 2020, those who were watching the game were given an opportunity to watch the robot play basketball.

When it came to making free throws, the limelight was quickly taken over by a humanoid robot that wore jersey number 95 and shot a perfect game.

The vehicle in question was Toyota's CUE, basketball playing robot.

The humanoid robot piqued the interest of more than just admirers; Tesla founder Elon Musk was also intrigued by it.

During the men's basketball game between the United States of America and France at the Tokyo Olympics in 2020, the robot made an appearance and demonstrated to the spectators its remarkable shooting talents.

It began with shooting a free throw and a three-pointer, and then it proceeded to take a shot from half-court after that.

CUE is a motorized basketball robot that stands 6 feet 10 inches tall and has motorized arms, knees, and legs.

The fact that the robot cannot dribble or jump and is, in fact, extremely slow was a blessing for human players since, as seen in the video, it took it almost ten seconds to travel from one shot to the other on the court.

In the year 2018, the Toyota Engineering Society developed a basketball playing robot that was endowed with artificial intelligence and had the capacity to shoot hoops at a level that was competitive with that of professional basketball players.

It is interesting to note that the engineers that constructed CUE did so in their leisure time and lacked any prior experience in either the creation of robots or the application of AI technology.

The first prototype of the robot could not be made to stand on its own; it required assistance.

At the public event when it was introduced, it was successful in nine out of ten shots, which was a highlight for the Toyota Engineering Society.

Following their evaluation of the basketball-playing robot, Toyota management decided to give the team responsible for its development permission to work on the project full-time for a period of two years.

The CUE2 model, which is of the second generation, was built by the team with assistance from Partner Robots.

The robot was now able to stand on its own without any assistance. In addition to this, the robot's motor output was increased, allowing it to successfully shoot a ball from beyond the three-point line.

Now we are in the year 2019, and the CUE team has debuted the third edition of the basketball robot, which is called the Toyota CUE3.

It was made more powerful than its previous iterations and could now alter the distance and trajectory, allowing it to shoot from anywhere between the three-point line and the center line.

Additionally, it was given the ability to adjust the distance and trajectory.

In addition to that, it also had the capability of catching the ball with its left hand.

CUE4, which was presented to the public in December 2019, is a humanoid robot that was designed to shoot basketballs.

It does this by measuring the distance between itself and the basket using a series of sensors that are mounted on its torso and then adjusting its shots appropriately.

The fact that it can run and independently grab and shoot a basketball are two of its most distinctive abilities.

The CUE team began preparing the robot for competition in a three-point shootout at the beginning of January of the year 2021.

In order to compete in the event, the robot needed to be able to move quickly, and its power and communication cables needed to be removed in order to develop and install a small, specialized motor.

In addition, in order for the creators to improve the shooting accuracy, they had to manage the rocking motion of CUE4.

It was necessary to completely rethink everything, including the sensors, the internal structure, and the AI algorithms in order to tackle these problems.

CUE4 was unveiled by Toyota as a demonstration of its visual feedback capabilities.

It is known to display 62.5 percent more three-point accuracy than all humans combined.

CUE5 was presented to the general public through performances at Alvark Tokyo game locations; however, prior to that, he had already taken part in the Olympic Games Tokyo 2020 at the request of the International Olympic Committee (IOC).

CUE is equipped with sensors that are mounted to its body to determine distance, and it uses artificial intelligence to determine how to slam dunk the ball into the hoop without making any noise.

After that, it adjusts the motors in its arms so that it can launch the ball into the air at the correct angle and with the necessary amount of force to either score one point or three points.

Although the fourth and most recent versions are capable of moving on their own, the degree to which they can move independently is not disclosed to the public.

Despite its outstanding capabilities, CUE is not the only robot that is making waves in the world of sports and games.

The FORPHEUS robot, which was built by the Japanese company Omron and is the current record holder for playing table tennis, was the first artificial intelligence (AI)-powered golfing robot in the world.

A Reddit user, slipperyhuman said, "I don’t think this robot is at an advantage. Perhaps very very long arms and spinning blades would make it beat human players."

A Reddit user MpVpRb said "This would have been impressive many years ago. Today, the Boston Dynamics bots are a lot faster and more agile."

Boston Dynamics is actually an American company that designs robots.

How Does The Basketball Shooting Robot Work?

CUE is equipped with sensors on its torso that measure distance, and it uses AI to determine how to deliver the ball into the basket in the most natural way possible. As soon as that is established, the robot will modify the motors in its arms so that it can launch the ball into the air at the exact right angle and with the exact perfect amount of propulsion to score a point, or three.

Who Made The Basketball Robot?

The Toyota project leader Tomohiro Nomi is responsible for conceiving these aesthetic features as well as the advanced AI computational capability that is housed inside CUE5's body. Nomi, who is now 43 years old, has been employed by Toyota for the past two decades and has spent the last four years concentrating his efforts on basketball robots.

What Do The Robots At The Olympics Do?

At the Olympic Stadium, they are assisting spectators who are using wheelchairs by transporting food and other items, guiding them to their seats, and providing information about the event.

Will the Toyota CUE be able to play basketball in place of human players?

CUE is incomparably superior to humans in terms of three-point shooting accuracy; nevertheless, it is unable to execute the moves that a human basketball player is capable of. It is unable to dribble or slam dunk, both of which are fundamental components of the game of basketball. It only has the ability to throw balls from a fixed provision.

Have you heard about the tomato eating robot?