What Famous Places Are Not Worthy Of A Visit? 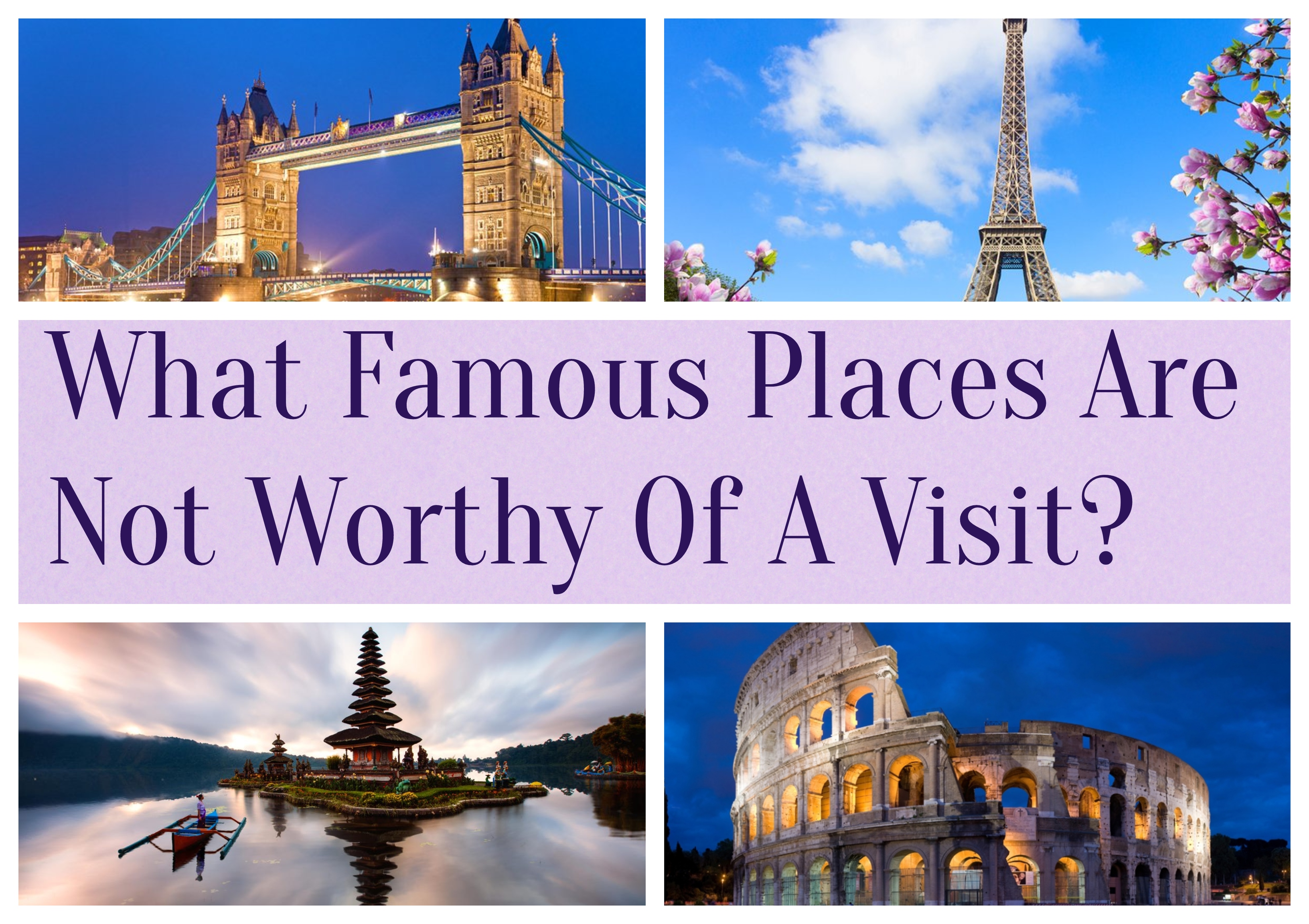 Many people save money all year to take a vacation and satisfy their wanderlust and bucket list. When your destination disappoints, nothing is worse than that. So, what famous places are not worthy of a visit?

In this article, a list of such places is given. So, do check it out before starting or planning your trip.

Have you ever decided where you wanted to go on vacation based purely on the possibility of visiting a certain site of interest?

And then, were you frustrated that you went to all that trouble only to be let down?

You have every right to feel a little bit aggravated after spending your hard-earned money to see tourist attractions that do not live up to your expectations.

Perhaps you were taken in by the marketing, or perhaps you did not conduct enough research.

By avoiding the most overrated tourist attractions, you can spare yourself the bitter taste of missed opportunities.

So, here is a list of what famous places are not worthy of a visit.

Tourist Destinations That Aren't Worth Your Time

Before you plan a trip to Stonehenge, you should investigate the cost of visiting some of the other ancient sites in the area.

Stonehenge may be impressive, but when you strip away all the puns, it's really just a collection of rocks and stones.

Visitors have been scratching their heads for years and years over the mysterious construction of these enormous rock formations. Nevertheless, is the experience of visiting this tourist trap really worth the money?

If you don't get there extremely early in the morning and pay for a pricey private tour, the only thing you'll be able to see is the backs of the heads of other people who are also tourists.

These well-known rocks can be found in the midst of nothing, around 120 kilometers (75 miles) from London.

The Great Wall Of China

If you decide to visit the Great Wall of China, it is recommended that you skip the area that is located in the middle of Beijing. It is heavily reconstructed and geared toward tourists.

Take a van ride quite a ways outside of the city, and you will arrive in the Simatai neighborhood.

There is a section of the Great Wall that is less visited and more traditional.

Blarney Stone Ireland - One Of The Worst Tourist Attractions

Does it really sound like a good deal to kiss away $2,000 to get the chance to kiss the Blarney Stone?

It is said that visitors will receive the gift of gab if they hang upside down from the edge of a castle that was built in the 15th century and then plant a kiss on the Blarney Stone.

However, the journey can be quite expensive, so it may not be worth it.

Some tourists argue that kissing the Blarney Stone is risky, either due to the fact that it has been used by so many different individuals or because it requires you to lean your head over a significant distance, both of which pose potential health risks.

In the event that you have forgotten everything you learned in high school about the history of the United States, here is a quick refresher: The Battle of the Alamo was the first of several missions that were fought to convert Native Americans to Christianity.

Later, during the Texas Revolution, a small number of Texans defended the Alamo Mission against the Mexican army, which inspired the push for Texas to break away from Mexico and become an independent nation.

You can get a sight of Texan pride pretty much wherever you look in the state or whenever you catch a glimpse of an "everything is larger in Texas" T-shirt.

It's a great story and a source of much pride for Texas, but you can get a glimpse of Texan pride pretty much anywhere you look in the state.

In conclusion, if you want to make better use of your time, you should skip the Alamo and instead go to Big Bend National Park, listen to bluegrass music, or eat barbecue.

When a city advertises an observatory, it is nearly always going to be pricey and uninspiring, as a general rule.

This is because observatories require a lot of maintenance and upkeep. The Space Needle in Seattle is not an exception to this rule.

The minimum cost of admission is $32.50, which is money that could be put to much better use by purchasing a bowl of chowder at Pike Place Market, purchasing a cup of coffee at the Starbucks Reserve Roastery, viewing an exhibit at the Seattle Art Museum, or taking a ferry to Whidbey Island, which is located nearby.

There is no use in shelling out money for a view in a city that is surrounded on all sides by natural scenery and open space.

The Leaning Tower Of Pisa, Tuscany

Is it cool to see the Leaning Tower of Pisa? Yes.

Are there a lot of people? Yes.

Do you know of any other fun things to do in Pisa? To be honest, no.

If you want to go to Pisa, you will have to go through Florence anyway, and there are a ton of other places that are much more interesting than Pisa.

The majority of people visit the Leaning Tower of Pisa due to the fact that they have heard about it in the past, and why wouldn't they?

And after that, they should take that silly picture of themselves attempting to hold it up so it doesn't fall over.

It's been done a million times, and it's trite, so it's definitely something you can safely avoid without any regrets on your part.

Of course I love Sherlock Holmes, so as a tousist I took the tour. Not far into walking around the house it dawned upon me... this is a fake set of a fictional character. What am I doing here????"

A Reddit user explained about plymouth Rock, "Plymouth Rock! I don’t know how famous it really is outside of New England but it’s a rock that marks where the Pilgrims supposedly first landed in Massachusetts. It is quite literally just a medium sized rock with “1620” carved in it but every elementary school teacher around Massachusetts at least hypes it up for the class field trip to see a literal rock that is not big, impressive, or really historically relevant. Driving an hour on a bus to see this was the most anticlimactic thing and I would not particularly recommend."

Judas_feast shared his experience about Holywood, "Hollywood, it's seedy and disappointing. It's full of entire industries (*cough scientology *cough) that take advantage of starry-eyed twits."

Which Countries Are Not Worth Visiting?

Why You Should Avoid Times Square?

Which European Countries Are Not Worth visiting?

You typically have a list of places you want to visit when you go on vacation. The majority of the time, those locations are popular tourist hotspots that are touted on every website as the "best" attractions in the area.

The problem with that is that everyone will follow suit and go to the same spot. That exciting tourist destination becomes an expensive, busy excursion where you're probably not going to have quite as much fun as you'd like.

And these places are included in the above list of what famous places are not worthy of a visit.