What Can Porzingis Bring to the Wizards? 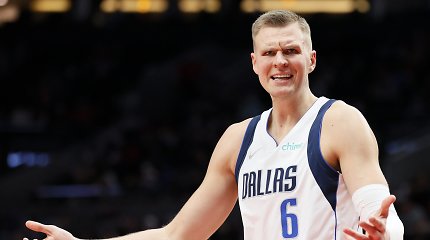 It would be fair to say that there were more than just a few eyebrows raised when the Washington Wizards made their move to bring in Kristaps Porzingis.

Considering the Wizards are not very favored in the odds to make the playoffs, being placed 11th in the Conference right now, Kristaps Porzingis with his past injuries may have not been the best signing.

However, let’s look at what Porzingis can bring to the Wizards.

Who Is Kristaps Porzingis?

Before we delve into the Wizards-Porzingis deal, we thought it would be worth touching on the player’s general experience. The Latvian-born baller cut his teeth in the EuroLeague with Sevilla before moving to the Knicks, where he was named an NBA All-Star in 2018.

After a few years there, Porzingis joined the Mavericks and, now arrives in Washington with a fair whack of experience under his belt.

The Wizards trading for Porzingis was a surprising deal at the NBA trade deadline with many questioning Porzingis’ ability. The Wizards’ General Manager, Tommy Sheppard, however, has stuck his neck out in defense of the signing claiming his side was not afraid to take a swing on a center that can, at best, be described as someone who is struggling.

With a nickname of the Unicorn, fans of Washington might be expecting magic from the former Mavericks man, and whilst we’re not convinced of that, we do think he can bring something to a side that has fallen down the rankings after an impressive start to the season. Here we look at exactly what Porzingis will bring to the team.

Forget the Wizards and focus on teams in general and one of the key things that sides have been looking for nowadays in a starting center is the ability to space the floor and shoot threes. Porzingis, who cuts an imposing figure as one of the tallest players in the NBA, does that to a tee.

The big man recorded roughly six three-point attempts per game last season for the Dallas Mavericks. He converted on a lot of them too with a highly respectable 37.6% to be exact.

You would expect that Porzingis will be a much more viable option for Washington as well, which will help his points per game return. One of his jobs will be to ease the pressure on people like Bradley Beal. At the moment the Wizards often find their offense collapsing with too many putting up poor shot conversions; Porzingis’ arrival should change that.

Right, let’s talk rim protection. There have been plenty of people that have poked fun at Porzingis in the past for his refusal to get his hands dirty and mix it up around the paint; many consider him to be bang average in his defense around that zone. What has perhaps flown under the radar a little is how much his ability as a paint defender has come on in recent memory. Don’t just take our words for it though; the stats back it up as well.

His defensive stats have skyrocketed up the player rankings across the past couple of years. For the Mavericks this season, Porzingis has averaged a solid 1.7 blocks per game and whilst he isn’t your intimidating rim protector ala Rudy Gobert of the Utah Jazz his capability in that area shouldn’t be ignored.

Given the blend of the Wizards roster and their lack of proven NBA-level defenders, Porzingis’ arrival could be a real help to the team. You can click here for more information on what are the Wizards’ chances to make the playoffs according to bookmakers.

It’s hardly an exciting note to end on but for the Wizards the salary cap is something that is important and therefore the financials cannot be ignored. Porzingis has arrived in Washington on a deal that will see him bag $31.6 million this season with things locked down next year and with an option available for the year after that.

It’s a fair wedge of money but the perspective is everything. To that point, Davis Bertans is raking in just shy of $37 million for the current campaign. When you consider that he was supposed to be the man to stretch the floor and sink three pointers, the $32m paid to Porzingis looks good.

Bertans has averaged a rather measly 5.5 points per game whilst shooting at just 31% from beyond the arc. Washington needs to get players onto their roster that help them win, while simultaneously keeping their salary cap hit to a minimum. Porzingis basically does that even though he still costs a decent sum of money throughout the next couple of years.

On top of all that, the Wizards also have faith that Porzingis being on the roster could help lure Bradley Beal to re-sign with the team on a max extension. We all know how much it would hurt the franchise if Beal were to walk away. If the Porzingis deal in any way gets that Beal deal sorted, it would be a massive positive on the new man.

There you have it, our guide to the Washington Wizards new man, Kristaps Porzingis. What do you think about this signing?