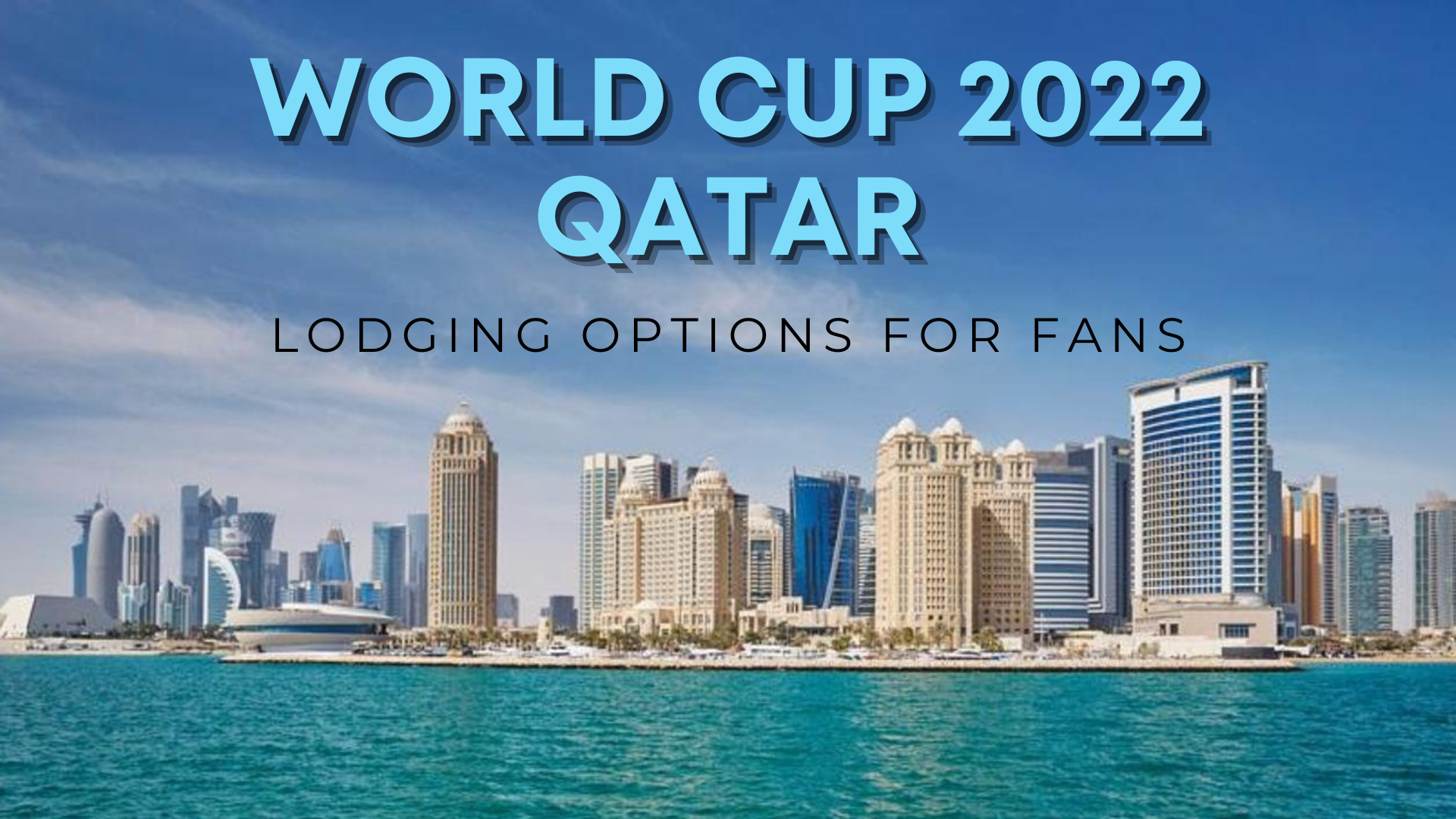 The World Football Cup is a four-year tournament that brings qualified nations from every continent together to compete and entertain football fans all over the world.

This year, World Cup 2022 Qatar is set to welcome fans from all over the world. In less than three months, the first Winter World Cup will be held here. On November 20th, Qatar will begin the tournament and its campaign against Ecuador.

As with any major sporting event, many people are planning to visit Qatar later this year; the Middle Eastern country hopes to attract 1.2 million visitors during the 28-day soccer tournament.

The preparations are well underway, with over 1 million fans from around the world expected to flock to Doha and its surrounding areas for the tournament and to cheer on their teams.

Meanwhile, fans from Europe, South America, and even Australia will plan trips to the Gulf, figuring out the best travel routes and, more importantly, lodging options.

Fortunately, fans will have a variety of lodging options when they arrive in Qatar. According to Omar Al Jaber, executive director of accommodation for the Supreme Committee, there should be something for everyone, regardless of taste or budget.

Football Now: What accommodation is available for fans at the FIFA World Cup 2022?

Football fans will find a variety of affordable accommodations at Qatar 2022 in November, according to tournament officials.

Through an official platform launched specifically for that purpose, the Supreme Committee for Delivery and Legacy (SC) emphasized its commitment to ensuring good preparation in terms of FIFA World Cup Qatar 2022 fan accommodation.

On April 8, 2022, the SC announced that available rooms for World Cup guests will reach 130,000, indicating that fans will have easy access to lodging.

Hotel rooms, floating hotels, villas, apartments, and fan villages are among the lodging options. According to the statement, Qatar expects to host a million fans during the competition. Fans who have purchased tournament tickets can now book their lodging through the official lodging reservation platform.

A room in one of the luxury floating hotels, which includes restaurants and a variety of recreational activities, costs around $180 per night.

"It seems this year, more so than ever, that there is more of a variety of options available for fans. If someone would like to have a low price accommodation, they will find it. And if someone was looking for a luxury, like floating hotels or hotels also, it is available."

The CEO of Qatar 2022, Nasser Al Khater, assured football fans planning a trip to Qatar that there would be plenty of options to meet their needs.

He emphasized Qatar's commitment to providing affordable lodging options for all World Cup visitors to the Middle East.

Here are some of the lodging options available.

There are numerous options in cities such as Muscat (Oman), Dubai (UAE), Abu Dhabi (UAE), and Dammam (Saudi Arabia). You can fly into Qatar for the games and then stay in another country nearby.

Hotels in any of the aforementioned cities make cross-border travel relatively simple. Staying in hotels in neighboring countries has many advantages, including lower costs. 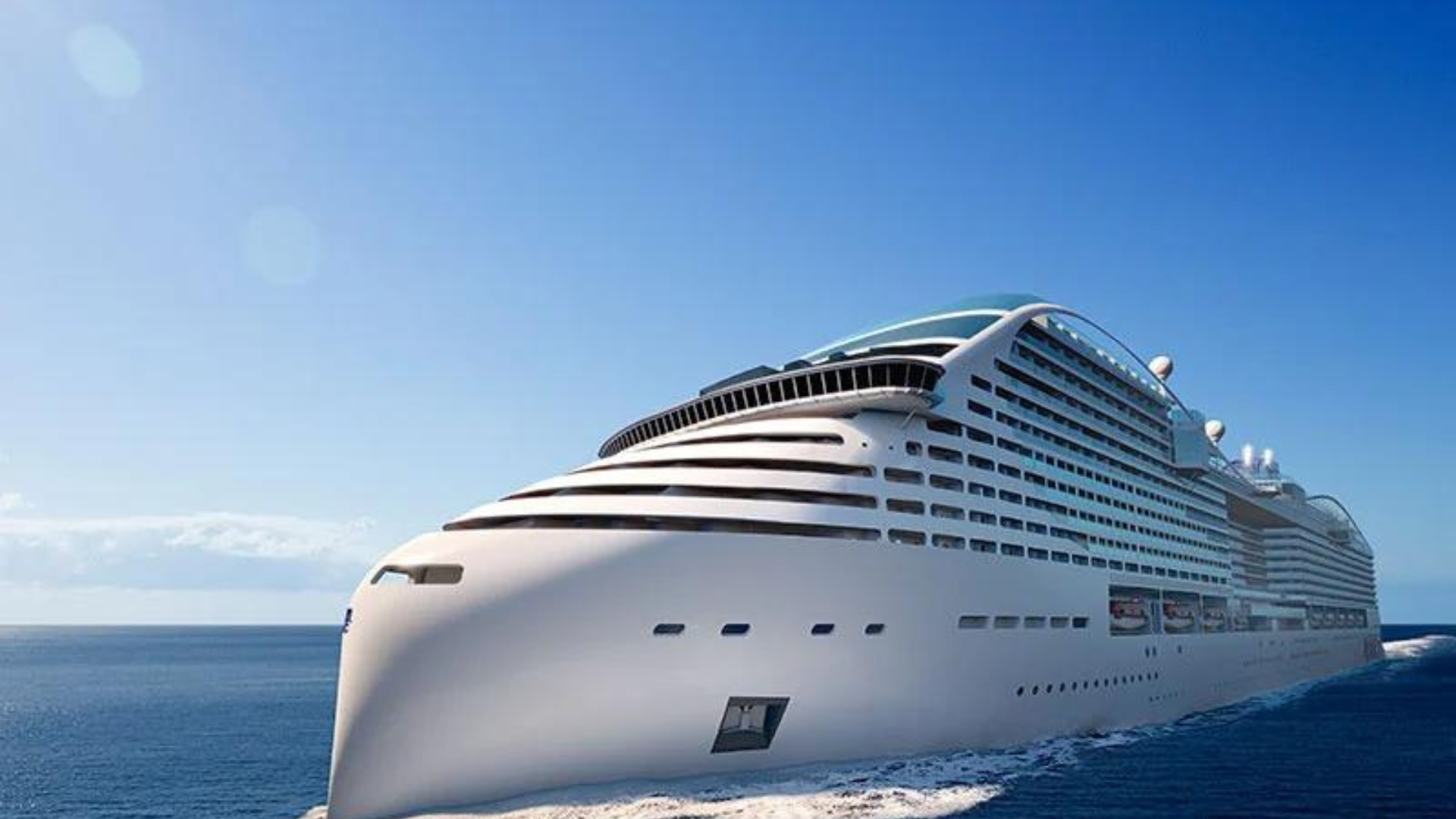 A big white cruise ship in the sea

For those looking for a one-of-a-kind lodging experience, cruise ship hotels will be docked in the city center for the duration of the tournament.

The MSC Poesia and MSC World Europa will be permanently moored at Doha's Grand Terminal, which is a 10-minute shuttle ride from the city center.

The larger of the two ships, the MSC World Europa, has 2,633 modern cabins, six swimming pools, a spa, and wellness center, shops and retail outlets, and more than 30 bars and event spaces.

Her inaugural voyage will be to Qatar in November, making World Cup guests the first to stay on board this stunning and modern vessel. 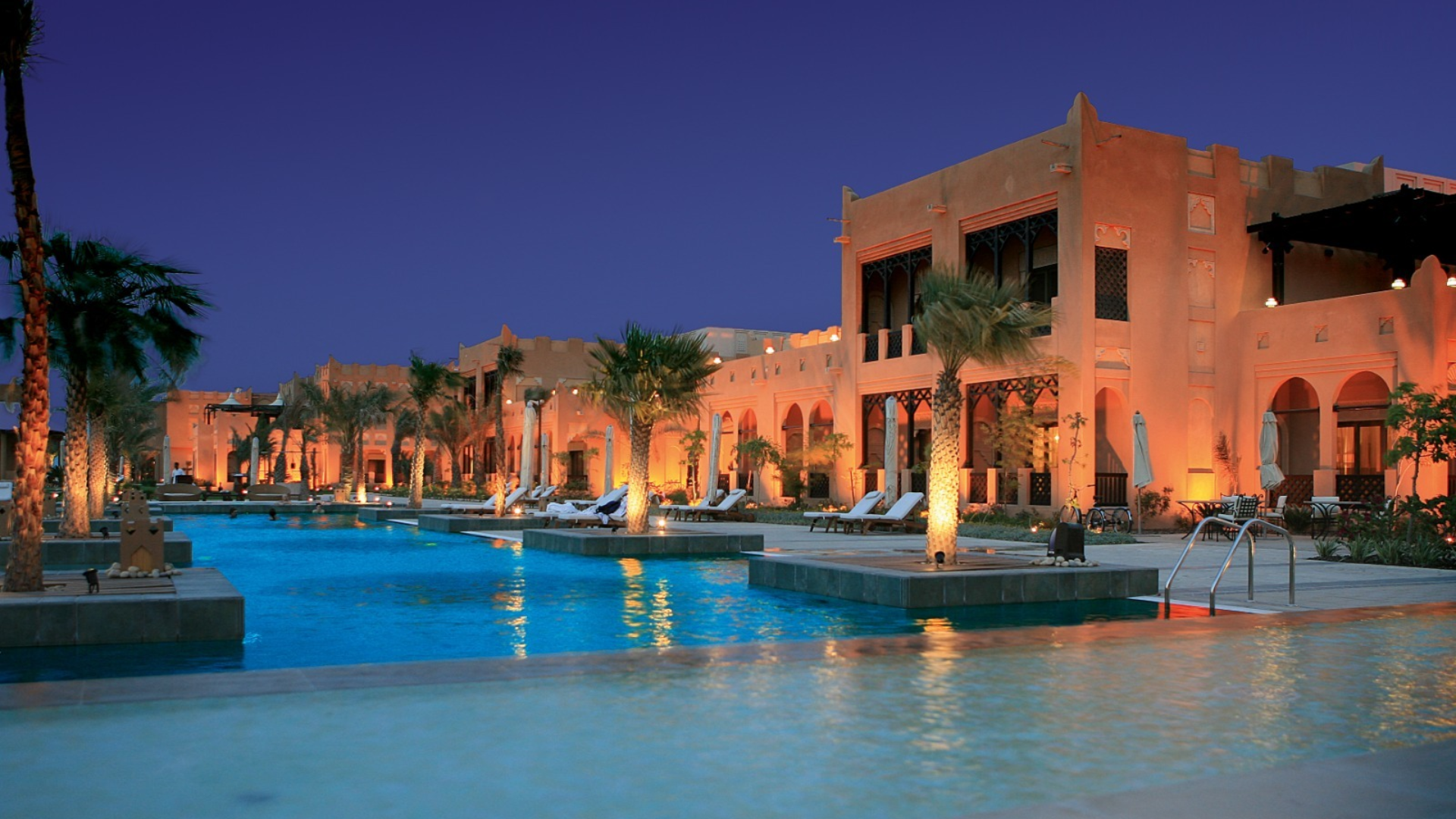 A big villa with a pool, sundeck chairs and trees

Serviced apartments and villas can be found throughout the city, close to many of the stadiums that will be used during the tournament.

These accommodations have one to six bedrooms and all of the amenities that a visitor will require during their stay. Among the amenities are fully equipped kitchens, TVs, dining tables and crockery, and en suite bathrooms.

For those who like to stay active, most apartment buildings have amenities such as a rooftop swimming pool and a gym. For those who prefer to stay social, saunas and game rooms are also available.

Prices and lengths of stay vary to meet the needs of all budgets. Areas closer to the city's busier core are, predictably, more expensive. A luxurious, centrally located apartment will cost between €350 and €400 per night. For those who do not require anything fancy, it is simple to find alternatives.

On the outskirts of Al Wakhrah, in the city's southwest, lodging costs around €80 per night. The apartments in this neighborhood are close to the Al Janoub stadium, which will host matches for France, the current world champions. 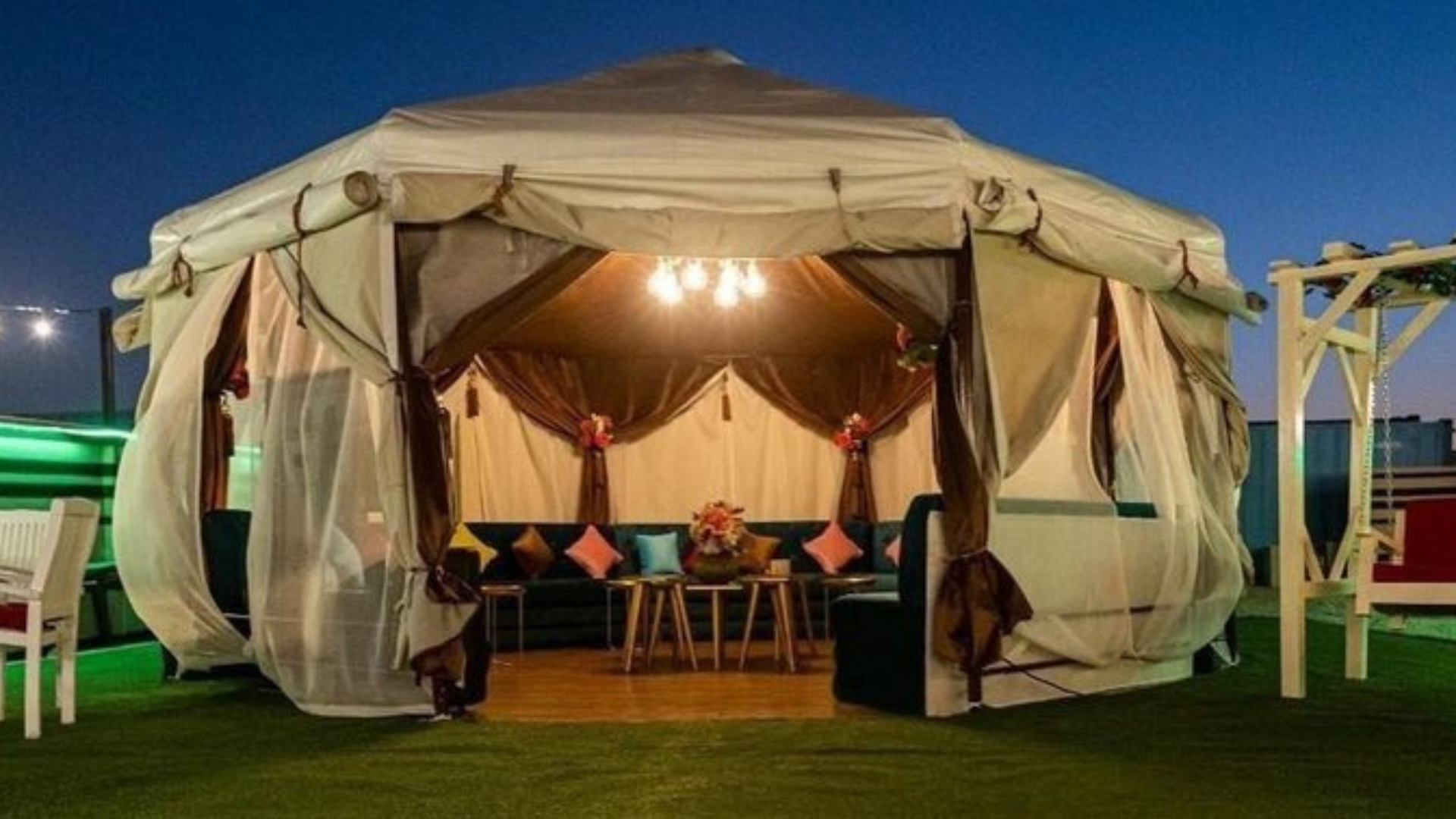 A big tent with some couches and pillows inside

International fans who want to immerse themselves in Qatar's traditional and local culture should visit the fan villages.

Al Bayt Stadium, which will host one of the World Cup's semi-final matches, is one of the most impressive stadiums built for the tournament. Al Bayt was inspired by the traditional tent, which embodies Qatari culture.

Traditional tents can be rented by fans who want to spend time in the desert. Traveling to the city from the outskirts of Doha necessitates desert accommodation, but public transportation and carpooling make getting to the city simple. These alternatives provide easy access to the city's stadiums and other attractions.

"The fan village that we have, it's different. It's a different category, different location," Omar Al Jaber continued, "It is part of our culture. We have a tent. We have shown. It's good to provide the fans with a different experience so they can feel that it's different and they are living in an Arab Gulf or Qatar."

The FIFA World Cup 2022 Qatar will be held for the first time in the Middle East.

Many luxury hotels have set aside thousands of rooms for FIFA officials and players. To meet anticipated demand, Qatar has leased two luxury cruise ships, encouraged homeowners to rent out their properties to visitors, and established a regional system of shuttle flights so fans can stay in other countries.

Fortunately, whether football fans prefer luxury or more traditional accommodations, there are a variety of options available in Doha for the duration of the World Cup.