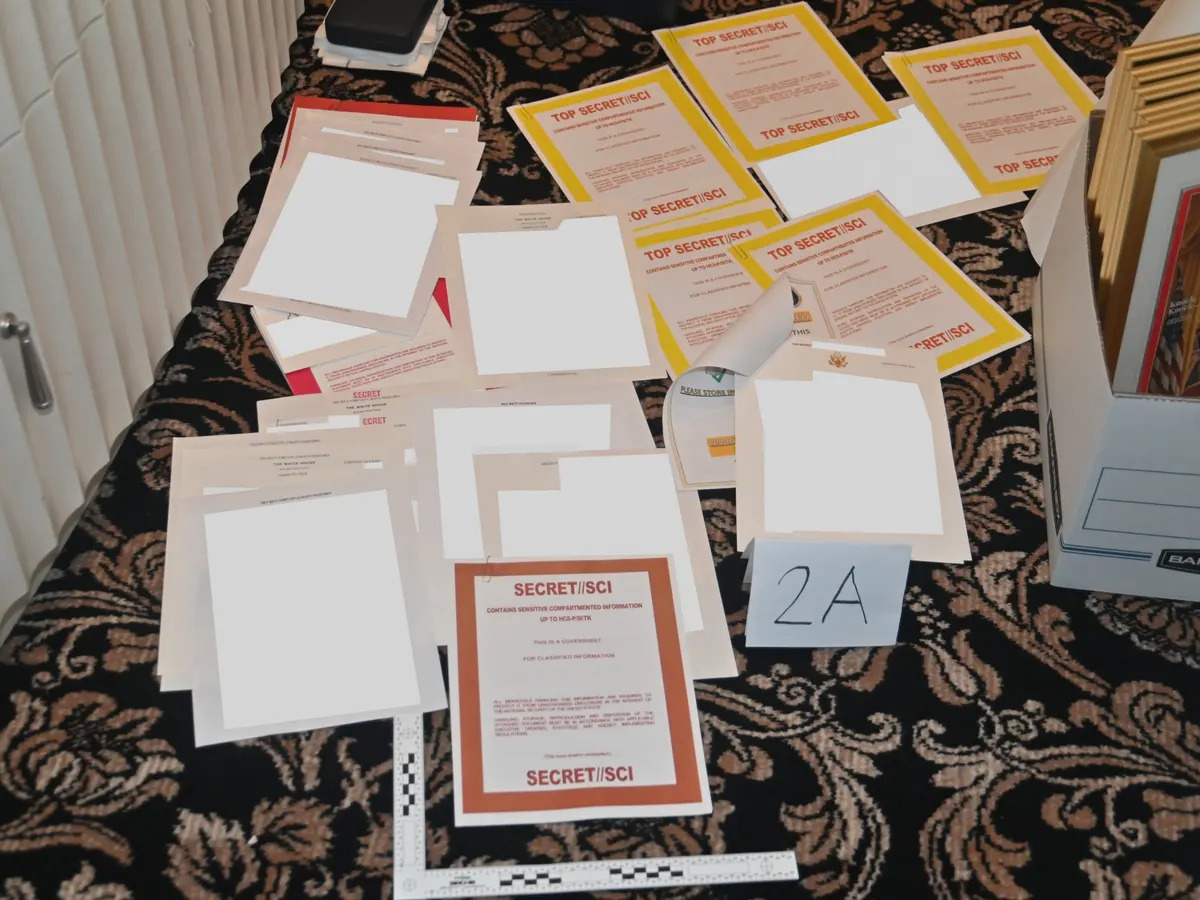 Donald Trump, the former president, said in a court document filed on Wednesday that because the 15 boxes he turned over from Mar-a-Lago in January contained presidential materials, the National Archives should have anticipated finding classified material among them.

In the document, which served as his final written legal defense before a crucial hearing on Thursday, he acknowledged that the Trump Mar A Lago documents had been discovered to contain classified material, but he argued that this should not have been caused for alarm and should not have prompted the search of Trump's Florida home earlier this month.

In a new filing on Wednesday, Trump uses the opportunity to formally refute claims made by prosecutors that members of his legal team engaged in "obstructive conduct" by hiding papers at his Florida club and lying to investigators about the number of classified documents still present.

He dismissed the notion that the DOJ could be "entrusted with the responsibility of evaluating its unjustified pursuit of criminalizing a former President's possession of personal and Presidential records in a secure setting," painting the investigation as politically motivated given Trump's potential candidacy in 2024.

The FBI discovered evidence that Trump's staff had withheld files after stating all secret materials had been turned over in June, the Justice Department had stated in court documents.

According to Trump's attorneys,

Trump's attorneys contend that the Archives should have made a good faith effort to achieve the recovery of presidential records in accordance with the Presidential Records Act rather than directing a criminal investigation to the Justice Department.

On Wednesday, Trump claimed that he had declassified all of the documents in the picture in posts on his social media network Truth Social.

"Terrible the way the FBI, during the Raid of Mar-a-Lago, threw documents haphazardly all over the floor (perhaps pretending it was me that did it!)," Trump wrote, "and then started taking pictures of them for the public to see. They supposedly wanted to keep them a secret. Good thing I declassified!"

However, just the cover page for secret documents are depicted in the images, and there is no proof that the documents were actually declassified; they simply display top-secret content.

Declassification is not mentioned at all in the 19-page document submitted on Wednesday. The Justice Department's submission from Tuesday includes a picture of "allegedly classified materials," according to one sentence written by Trump's attorneys.

Trump filed a civil lawsuit earlier this month in an effort to appoint a "special master" to examine records that the FBI confiscated from Mar-a-Lago. The conflicting court filings are related to that action. This request is opposed by federal prosecutors, who contend that it would obstruct an ongoing criminal investigation and the intelligence community's assessment of any potential national security implications. They also want the lawsuit to be dismissed.

It would be acceptable for the special master to have a Top Secret/SCI security clearance, according to Trump's filing, should one be appointed. This is an implied admission of the documents' top-level classification markings.

Thursday at 1 PM ET is the time for the hearing.

Trump Had More Than 300 Classified Documents At Mar-a-Lago

When it received the first batch of materials from the former president in January, the National Archives discovered more than 150 sensitive documents, which may have contributed to the Justice Department's hasty response.

More than 150 of the documents taken from former President Donald J. Trump by the National Archives in January were classified, which aroused serious concern at the Justice Department and sparked a criminal investigation that led F.B.I. agents to raid Mar-a-Lago this month in an effort to recover more, according to multiple people briefed on the situation.

Since Mr. Trump left office, the government has reportedly found more than 300 documents with classified markings from him, including the first batch that was returned in January, another set that Mr. Trump's aides gave to the Justice Department in June, and the materials that the F.B.I. found during its search this month.

It is easier to see why the Justice Department acted so quickly to find any further classified materials the former president could possess given the previously unreported extent of the sensitive material discovered in his possession in January.

The extent to which so many extremely sensitive documents remained at Mar-a-Lago for months, even as the department sought the return of all documents that should have been left in government custody when Mr. Trump left office, indicated to officials that the former president or his aides had been careless in handling it, had not been completely honest with investigators, or both.

It is yet unknown what critical information specifically Mr. Trump stole from the White House. But a person knowledgeable on the situation said that the 15 boxes Mr. Trump handed up to the archives in January, nearly a year after he left office, contained records from the C.I.A., the National Security Agency, and the F.B.I. covering a range of themes of national security concern.

According to some people briefed on his efforts, Mr. Trump personally combed through the boxes in late 2021 before sending them over.

Because some of the information in the boxes was extremely sensitive, archives staff members referred the case to the Justice Department, which within months had set up a grand jury investigation.

Several hundred more private documents were provided by Mr. Trump's aides to the Justice Department during a visit to Mar-a-Lago in early June. This month's search resulted in 26 boxes being taken by officials, including 11 sets of material labeled as classified including a large number of supplementary documents. One set contained material that was classified at the top secret/sensitive level.

The Justice Department investigation is ongoing, so it's possible that authorities are unsure of their ability to recover every one of the presidential records that Mr. Trump stole from the White House.

Trump's legal team argued that the government ought to give copies of the items the FBI confiscated to both the special master and Trump.

A copy of the search warrant and the materials used to get it, including the affidavit that was made public last week with redactions, are other items the former president is requesting.

According to the petition, "The Government should provide to the special master and to Movant a copy of the Seized Materials, a copy of the Search Warrant, and an unredacted copy of the underlying application materials."

The Justice Department said that making the affidavit's redacted portions public would compromise the current federal investigation into the papers, particularly by exposing potential witnesses. In television interviews, one of Trump's attorneys claimed that the team intended to find out the names of the investigation's witnesses.

Additionally, the Justice Department has already disputed Trump's claim that prosecutors dishonestly turned a disagreement over the ineffective Presidential Records Act into a comprehensive criminal inquiry.

In a court filing on Tuesday, prosecutors stated that "this investigation is not simply about efforts to recover improperly retained Presidential records." They cited the search warrant, which a court had authorized after determining that there was reasonable cause for violations of the Espionage Act, criminal handling of government records, and obstruction of justice.

Prosecutors also refuted Trump's claims by pointing out that it is a crime to hide or erase "Presidential records" according to the federal legislation they quoted about improper management of government records.

14 days after the search order was carried out, Trump filed the lawsuit early last week, alleging that his constitutional rights had been violated. He insisted on the appointment of a special master to examine the documents the FBI had taken from Mar-a-Lago. In some cases, especially those where attorneys' offices have been searched, courts appoint a special master, a third-party attorney, to analyze evidence gathered by the government and separate out privileged items that should be kept out of the hands of investigators.

Trump's initial lawsuit was deemed to be missing a number of essential legal aspects, so the judge presiding over the case—Trump appointment Judge Aileen Cannon—asked Trump's attorneys to supply further details last Friday. She stated in an order on Saturday that she was inclined to choose the special master but would first take into account any court documents opposing the request and hear arguments on it on Thursday.

In its submission on Tuesday, the Justice Department said that appointing a special master would be "unnecessary" and that doing so would obstruct both the criminal investigation and the risk assessment being conducted by the intelligence community. The prosecution claimed that Trump's ask was denied because he was unable to pass the necessary procedural hurdles.

The DOJ claimed that Trump's scenario, which centered mostly on dubious assertions of executive privilege, was very dissimilar from the circumstances in which special masters are normally appointed. The primary worry in those situations is with documents protected by the attorney-client privilege.

"A limited set of materials" that might be protected by the attorney-client privilege were found during the search, the prosecution has previously informed the court. The internal filter team at the DOJ has already completed its task of separating those items from the information supplied with investigators, the department announced on Tuesday, and the agents handling the case have already reviewed the remaining records.

Trump criticized the DOJ's own filtering procedure, which US Magistrate Bruce Reinhart had approved when he authorized the warrant in early August. According to Trump's attorneys, this procedure "provides the filter Privilege Review Team with virtually unchecked discretion in addressing potential privilege disputes."

The three methods the DOJ described for the filter team to handle privileged materials were not "sufficient to protect Movant's significant interests, and not surprisingly, as of this filing the Privilege Review Team has made no effort to contact Movant's counsel regarding its decisionmaking or the results of the privilege review," according to him.

The filing also provided fresh information about the special master's duties that was not included in his previous motion from the previous week or the follow-up submission that was submitted last Friday at the judge's request.

The months that Trump's team delayed the government's efforts to obtain the record were described in his filing as "standard give-and-take between former Presidents and (the National Archives and Records Administration) regarding Presidential library contents," which he claimed made him the reasonable party in the events leading up to the search.

According to Trump, when FBI agents went to Mar-a-Lago to retrieve papers that had been sought by subpoena, he "literally allowing DOJ lawyers and FBI investigators to come to his home and provide security advice."