The Life of Suki Waterhouse 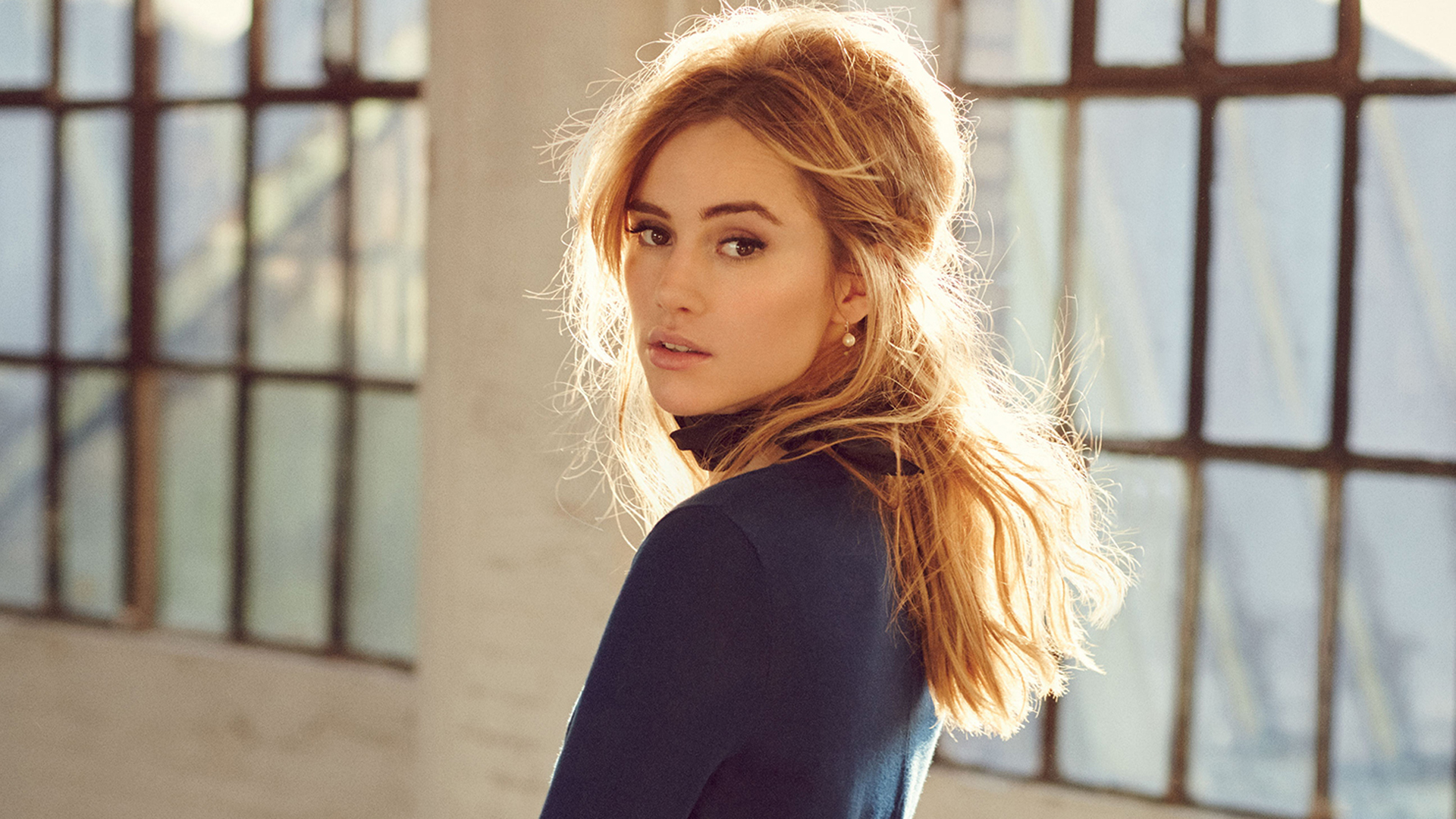 Alice Suki Waterhouse is a British model with a particular personality, a dazzling it-girl, a rising actress, and the co-founder of the youth accessory brand Pop & Suki.

She was an ambassador for the couture Burberry houses, the luxury brand Redken, and she appeared on the glossy pages of Vogue, Elle, Marie Claire, Glamor, and Tatler. She walked the runways for well-known brands such as Swatch and H&M, and she also appeared in films such as "Churchill," "Billionaire Boys Club," "The Divergent Series: Insurgent," and "The White Princess." Suki appeared in the romantic drama horror-thriller film "The Bad Batch," which won a special jury prize at the Venice Film Festival in 2016.

The future fashion-world celebrity was born on January 5, 1992, in Hammersmith, the western side of Foggy Albion's metropolis, and grew up in Chiswick. She became the family's first child. Her parents decided to be clever and gave her the Japanese middle name Suki, which translates as "beloved." Initially, they planned to call her Kuuki since she is "eccentric." She later had the sisters Madeleine and Imogen as Immi, who also became a model, as well as brother Charlie.

Their mother, Elizabeth, was a nurse who cared for cancer patients. Father Norman was a well-known plastic surgery specialist in the United Kingdom. He had a private clinic and was a strong supporter of charity causes. Suki began volunteering later in life, following in the footsteps of her family.

The girl went to the exclusive Ibstock Place School, where future supermodels Cara Delevingne and Georgia May (daughter of the iconic Mick Jagger) were also students. They afterward became close friends with her. Suki studied karate (she has a black belt) and kickboxing later in life.

She became obsessed with music and theater as a teenager. She had decided to become an actress and had given up on her modeling career. Suki's ten-year-old maiden performance took place on the stage of one of London's West End theaters. It was the musical "Les Miserables," based on Victor Hugo's novel of the same name, and she played the unhappy little child Cosetta. Her performance of the song "Castle on a Cloud," in which her destitute character dreams of a better existence, captivated the audience.

When she was 16, a model scout from a modeling agency approached her in a London pub and offered her a chance to work in the worldwide fashion industry. She dropped out of school and signed a contract with the worldwide agency Next Models Management without hesitation, despite the fact that her parents were, to put it mildly, unenthusiastic about the move.

The charming British woman's modeling career took off quickly and successfully. She was involved in high-profile marketing initiatives. Suki walked the runways of the world's most prominent fashion houses and graced the covers of cult publications such as the British secular publication Tatler and the influential glossy Vogue. Representatives from the fashion world were enticed by her naturally expressive nature, courage, and ability to easily reincarnate, transform into any character while being true to herself, and look charming and natural.

At the age of 18, she began her television career by appearing in the TV shows about fashion, love, and fantasies «Material Girl». In 19 she became the face of the largest domestic maker Marks & Spencer's underwear advertising campaign. In 2011, the model attended the Rimmel & Kate Moss Party, which was held to commemorate the tenth anniversary of Kate Moss' collaboration with the British cosmetics brand Rimmel.

The British actress made her Hollywood debut in the film "Pusher" in 2012. (remake of the 1996 film of the same name). She acted as a friend of junkie Frank (played by Richard Coyle), giving him all sorts of problems.

In 2013, Christopher Bailey, the president of the house Burberry, appointed her as the "face" of the perfume composition Brit Rhythm for Women, in which lavender plays a prominent role. During the same year, she actively collaborated with other well-known brands such as H&M, Max Studio, Swatch, and Pepe Jeans.

The model took part in a picture show at the Eb and Flow Gallery in Moscow. She displayed a series of photographs titled "I'll Be Your Mirror." It featured images of herself as well as her celebrity friends, Georgia May Jagger and Cara Delevingne. They also demonstrated the autumn-winter collection of the fashion label Burberry during London Fashion Week. They posed for photographs in branded clothes as the "Bloomsbury Girls." Then she appeared naked in a commercial for Dominic Jones Jewelry.

In January of the following year, a portrait of the international runway sensation graced the cover of English ELLE, and in the autumn, she could be seen on the big screen in the comedy "Love, Rosie," based on Cecilia Ahern's book "Where Rainbows End." Lily Collins and Sam Claflin were her coworkers on the set. She played the role of the girl who married the film's hero, Sam.

Suki and her sister Immy became the ambassadors for Mytheresa x Tommy Hilfiger's capsule collection featuring aspects of 90s sports chic in 2015. She wore velour sweaters, men's boxers, and antique jackets, proving that she looks beautiful in any outfit.

During the same time period, she appeared in the sequel to the Hollywood film "Divergent," which was based on Veronica Roth's novel "Insurgent." She was taking on the role of Marlene, the spokesperson of the heroic men in a futuristic Chicago.

Six films starring Waterhouse were released in 2016, including the post-apocalyptic thriller "The Bad Batch," which premiered at the Venice Film Festival. This time, she played Arlene, a girl who was kidnapped in the Texas desert by a cannibal tribe. Stars such as Jim Carrey, Keanu Reeves, Jason Momoa, and Giovanni Ribisi also worked alongside her on the horror flick.

The same year, the charming British woman shone in Burberry's new advertising campaign for the launching of the so-called silky Kisses lipstick. She and singer George Le Pashem played a couple in love in the promo, which was shot by the famous Mario Testino. Only one traditional checkered scarf was provided for each of them.

A model with enormous potential also established and released (in collaboration with TV presenter Poppy Jamie) the Pop & Suki accessory range. The first collection consisted of 17 pieces, including backpacks, clutches, bags, keyrings, and pendants, with designs that united femininity, elegance, and functionality.

Based on Philipp Gregory's eponymous work, a British-American historical mini-series titled "The White Princess" was produced in 2017. Suki portrayed Cecilia, The Duchess of York's sister.

The revelation of her "Mercier Muse" was especially exciting for followers of the young British. She rose to prominence as the face of Laura Mercier, a world-renowned American cosmetics and perfumery.

In 2018, what are your plans? Suki appeared in films such as "Jonathan," "Billionaire Boys Club," "Assassination Nation," and "A Rainy Day in New York."

The talented British lady is not married. Miles Kane, a former member of The Rascals band, was her boyfriend in 2012. Her affair with Hollywood star Bradley Cooper, who was 17 years her senior, grabbed the attention of the media in 2013. They met in London during the ELLE Style Awards.

They split up in 2015, purportedly at the request of a Hollywood actor who was fed up with the fact that the girl was only focused on her job and did not provide him with adequate support.

Suki's chosen one was then Mexican artist Diego Luna, who starred in the adventure "Rogue One: A Star Wars Story." He is also 12 years her senior. Their first meeting occurred in 2016 while they were both working on the set of the film "The Bad Batch."

She began dating Robert Pattinson in the summer of 2018. They haven't confirmed their relationship yet, but their followers are certain that they are engaged.

Suki stated that she is a big fan of psychedelic indie rock and particularly admired the work of the American band "Black Rebel Motorcycle Club".

In addition to modeling, she aspires to be a successful actress or photographer, to write songs, and to launch her own magazine. The girl is open to the idea of being a young mother.

Suki appeared in three films in 2019: the thriller "Burn," the dramedy "A Rainy Day in New York" alongside Timothée Chalamet and Elle Fanning, and the action film "Killers Anonymous."

The comedy "Misbehaviour," starring Keira Knightley and Suki Waterhouse, was released in 2020.