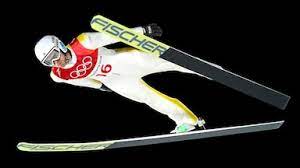 Speed, exciting aerodynamics and cringe-worthy collisions are the hallmarks of this Olympic sport. It's still a sport that's mostly unknown outside of Europe and Japan, despite the fact that athletes hurtle down a ramp at speeds of up to 100 kilometers per hour before leaping over a football field.

There has been an increase in popular awareness of ski jumping in recent years, especially to the 2016 film "Eddie the Eagle," which depicted the unexpected Olympic journey of British ski jumper Eddie Edwards. In other words, what exactly goes into ski jumping, and how on earth do the jumpers manage to land safely? Keep scrolling and read on this ski jumping 101, the beginner's guide.

What Is Ski Jumping?

This sport has skiers attempting to land as far down the slope as possible after descending an in-run and jumping. Ski jumping is usually regarded as one of the first extreme sports. It was one of eight sports featured in the first Olympic Winter Games, held in Chamonix, France, in 1924. In 2014, women made their Olympic debut in ski jumping.

What Are The 4 Phases In A Ski Jump? 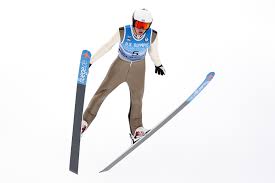 The time that the athlete travels down the ramp during the leap.

When you're flying up a hill, this is how far away you are from takeoff. The K Point in PyeongChang is 125 meters from the takeoff point for the giant hill, and 95 meters for the average hill. Using the K Point, you may determine how much distance points a leap will receive.

Olympic ski jump hill in PyeongChang is the largest of the two at a height of 125 meters (about 410 feet).

Normal Hill in PyeongChang has a K Point of 98 meters, which is the smallest of the two Olympic ski jump hills (about 320 feet).

At the bottom of the slope, the flat area where skiers decelerate and come to a halt.

The point at which the jumper takes flight at the end of the inrun.

Each jumper's flight phase is unique. While it may be difficult to tell, each jumper is unique in the air. The skis of the jumper are positioned in the traditional V form, and the arms are held somewhat out from the body to optimize surface area.

The jumper's flight must stay flexible in order to respond to shifting wind conditions. Occasionally, jumpers will move their arms slightly to realign their flight curve and search for maximum lift in order to stay airborne longer. On a 90-meter or 120-meter jump, the jumper is never more than 10-15 feet above the ground, following the curves of the slope.

Lunging forward after landing with one ski in front of the other. The maneuver is called after a Norwegian province.

Less difficult than landings on a ski jump. Landings rely on balance and weight. They prepare for a telemark landing by spreading their arms to the side and gently bending their knees to absorb the small impact. Jumper skis out-runs to a stop. The entire jump takes less than ten seconds.

Most jumpers adopt this position of their skis when in the air. The tails of the skis are touching or almost touching, and the tips are split apart to form a "V." This position increases the ski jumper's aerodynamics.

How Is Ski Jumping Scored? 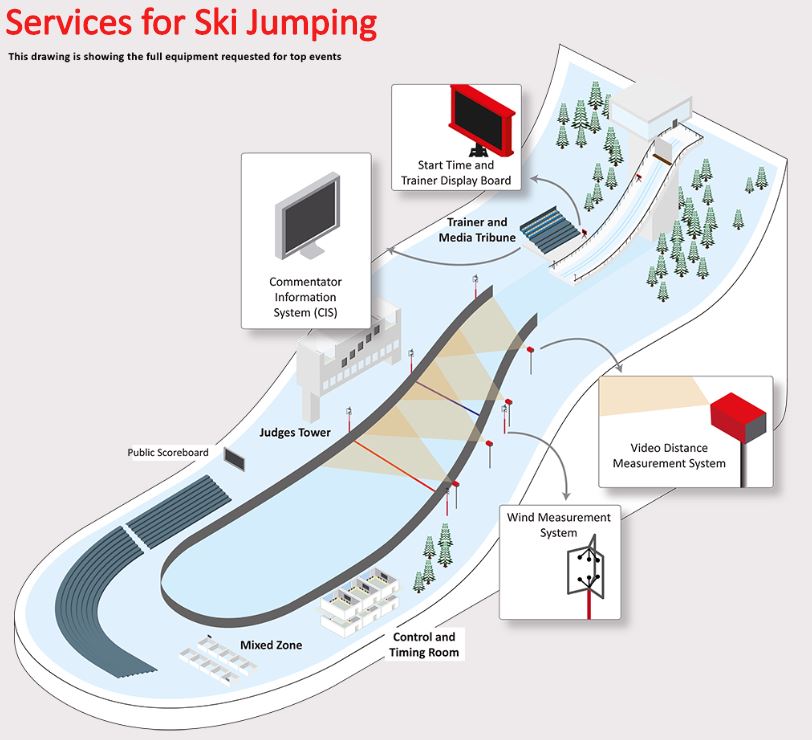 Diagram how ski jumping is scored

Five judges score distance and style points. Trial and scored jumps for all. [Note: only the top 30 finishers from the first round advance to the second round.] In World Cup, World Championship, and Olympic races, wind and gate compensation is used.

What Do Ski Jumpers Wear? 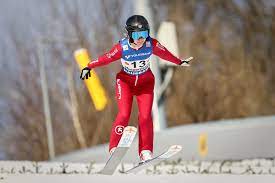 Ski jumping is a Nordic sport, thus the participants' boots are only attached at the toe to the skis. Its firm leather boots push forward at an angle when laced, helping the jumper keep balanced in the run-up and flight.

The suits are similar to wet suits but made of a thick, spongy material that helps "lift". The suits can only let out a little amount of air. The International Ski Federation limits the suit's distance from the body to 2 cm.

Other gear includes a helmet, ski goggles, and gloves.

Ski jumping can be hard and expensive, but it's a whole lot of fun, especially if you have a prime location to practice it. This ski jumping 101 will guide you on what you need to know and prepare before you get started.