Russian Missile Attack On Dnipro Has Left The City In Shock 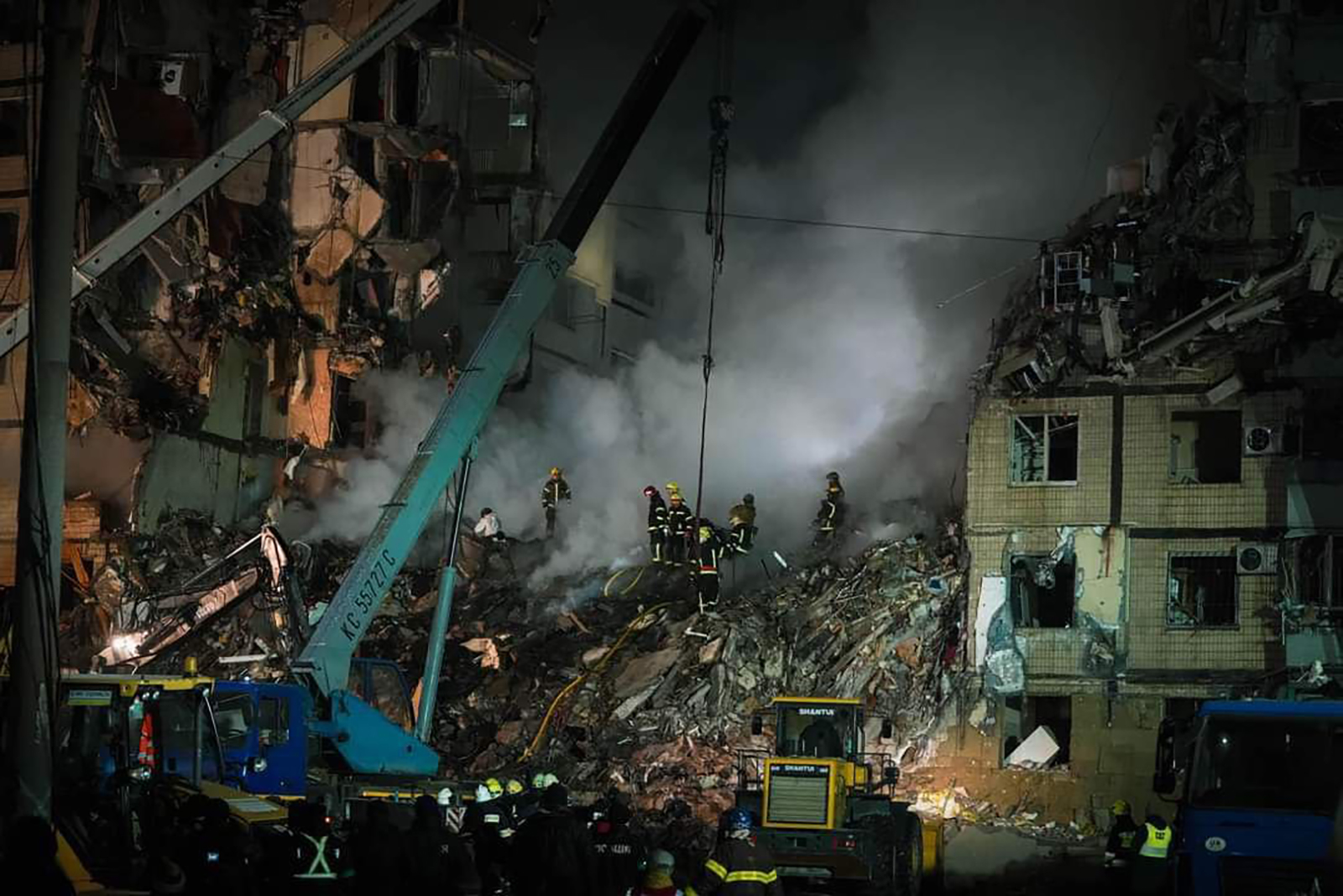 The Russian missile attack on Dnipro has left the city in shock. Early on Saturday, as families in the central Ukrainian city were relaxing at home, a Russian cruise missile hit a nine-story apartment building that looked out over a park near the river. At least 40 people were killed, 75 were hurt, and 46 are still missing.

The main part of that building is gone and has been turned into a pile of broken concrete. When the missile, which had a warhead of nearly one metric ton, hit the basement, it cut apartments in half.

Svitlana Lishchynska, who lives in a building next door, said that the impact shook everything in her house, including the walls.

At the same moment, my daughter, who had gone for a walk with her friend, called and told me about the loud explosions. I ran to her. The closer I got, the more it looked like hell. When I got there, I froze – the two entrances simply did not exist anymore. They had turned into a pile of concrete and a gaping hole. It was a picture of the apocalypse. Everyone was in a kind of stupor, because it was impossible to believe that this was happening to us.

- Svitlana Lishchynska, who lives in a building next door

Even 36 hours after the strike, heat from the impact was still sending smoke into the cold air. Rescue workers climbed over the wreckage, but their hopes of finding more people alive were getting smaller by the hour.

Ukrainian officials say that there are still 35 people who have not been found. Saturday just after midnight, the last person to be saved was heard calling for help. It took nine hours to get to her, and by the time they did, she was very cold.

Sunday night, small groups of people stood still behind a cordon. Some were still hoping for a miracle, while others held flowers or lit candles. Some of them wiped away tears as they watched bulldozers fight with concrete sheets and twisted steel.

Above them, on the fifth floor, firefighters risked their lives to clean up loose debris in someone's living room. Curtains that had been torn up flapped in the wind.

Half of a kitchen was perched on the edge of the hole on the top floor. Not too long ago, one of the kids who lived there had a birthday party. An Instagram post showed the event. In the attack, their well-known boxing coach father died.

Olha Nevenchanaya said that she had been by the building about half an hour before it was hit. “There are many friends and people close to me here. Many, many …,” she said, and then she started to cry.

Natalia Babachenko, an adviser to the head of the Dnipropetrovsk regional military administration, says that more than 30 people are still in the hospital, and 12 of them are in very bad shape. One of the seriously hurt is a 9-year-old girl.

Most of the injured were taken to Mechanikova hospital, where the head doctor, Serhii Ryzchenko, said people were covered in blood and dust and their clothes were torn. Every part of their bodies was full of pieces of metal and concrete.

But there were also times of happiness among the sadness. Maksim Omelianenko, a soldier who was stationed in Bakhmut in eastern Ukraine, rushed to Dnipro to find out if his mother was still alive.

“I learn that, most likely by some miracle, my mother survived, in a piece of the kitchen, the only surviving part of my apartment on the 9th floor, trapped beneath the stove,” he posted on Instagram.

'The closer I got, the more it looked like hell'. Dnipro reels from deadly Russian missile strike

Russia Fired A Missile At A Ship

Ukrainian officials say that the rocket that hit the building was a Kh-22.Ukrainian military says that it doesn't have the power to stop these missiles because they were made to sink ships, not destroy apartment buildings.

The Soviets made the Kh-22, which is known for being very inaccurate. Still, there are no military or infrastructure targets within a few hundred meters of the destroyed building.

Since the invasion began, the military says that more than 200 Kh-22s have been sent to attack Ukraine. Last September, one hit a shopping center in the nearby city of Kremenchuk, killing at least 18 people.

The apartment building was on Naberezhna Peremohy, which was called the Embankment of Victory because the Soviet Union had won the war against Nazi Germany.

When they gave this name to this street, they had in mind the victory over the Nazis in the Second World War. And we must do everything we can to stop Ruscism, just as the free world once stopped Nazism.

Now, people in Dnipro will remember the building at 118 Naberezhna Peremohy as a sign of another war. Olena Loyan, a resident of Dnipro, cursed the Russians as she stood outside on Sunday, shocked by how much damage had been done. She said, “I simply hate them, Children, people, died.”