Quakes On Mars Hint There May Be Volcanic Magma Underground 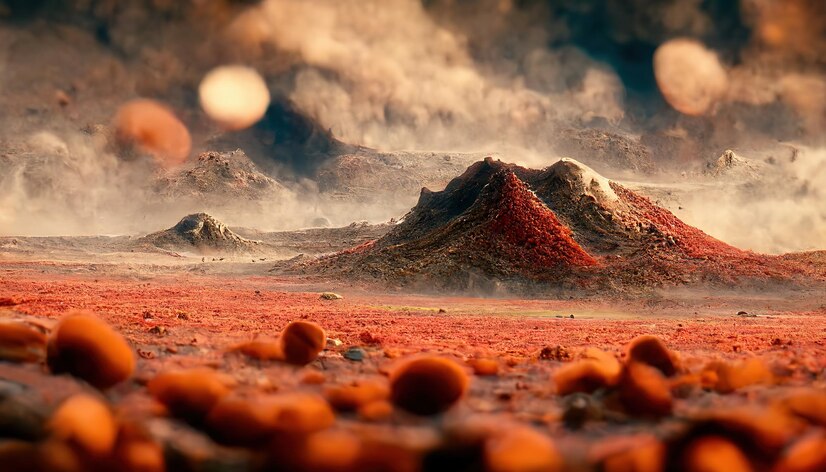 Quakes on Mars hint there may be volcanic magma underground. Magma clues found beneath suggest that Mars is not the geologically dead place we always imagined it was.

Volcanic activity on Mars is known to have occurred in the past, although not for tens of millions of years. After studying a cluster of more than 20 seismic occurrences on Mars using data from NASA's InSight lander mission, Simon Stähler of ETH Zurich in Switzerland and his coworkers have found what is likely a magma deposit in Cerberus Fossae, an area of fissures produced by fault lines. Nature Astronomy published the study's findings.

InSight, which arrived on Mars in 2018, is equipped to examine seismic waves that propagate over the surface and from the planet's core. By studying the speeds and frequencies of these waves, scientists can learn more about how Mars's geology works.

It's the latest sign that Mars' volcanoes have been active for a much longer time than was thought before. This could affect what we know about Mars' geology and whether or not there is life under the surface of the Red Planet.

It wasn't until later that scientists began to question the idea that little happened deep inside the core of our tiny red buddy. The planet has no discernible magnetic field on a global scale, and as magnetic fields are generated inside, this has led scientists to conclude that there must be very little going on inside the planet.

But then science occurred, and we learned that Mars is rumbling and groaning with seismic activity, some of it very astonishingly violent. All of this was possible because NASA's InSight lander was equipped with high-tech seismic detectors. InSight has found more than 1,300 earthquakes, which completely change how we think about the way Mars moves.

A group of geophysicists headed by Simon Stähler of ETH Zurich in Switzerland has recently studied a cluster of 20 recent quakes to understand better what's going on in the belly of the Mars beast and what those tremors may tell us about the planet's internal structure and activity.

After analyzing the data, the researchers concluded that most of the faults detected throughout Mars's whole surface are inactive. It's fascinating that the Cerberus Fossae area seems to be the cluster's birthplace. Graben happens when faults open up because of tectonic activity, and crustal blocks slide down between the parallel ridges of the faults.

The research group discovered that the deeper seismic waves' low frequency is compatible with molten magma and, by extension, continuing modern volcanic activity, occurring anywhere between 30 and 50 kilometers (18 and 31 miles) below the surface. There also seem to be a lot of marsquakes along the edges of the Cerberus Fossae graben.

The Cerberus Fossae may be responsible for at least half of all the earthquakes on Mars. Next, they matched their findings to observational photographs of the Cerberus Fossae. They discovered black dust deposits strewn in all directions from a crack called the Cerberus Fossae Mantling Unit. A year ago, this was recognized as proof of recent volcanic activity on Mars.

Stahler says that the darker color of the dust shows that there has been volcanic activity recently, maybe in the last 50,000 years. It's possible that the magma is now moving east to the next place where an eruption will happen or that what we're seeing is the last of what used to be an active volcanic zone.

I think the exciting thing is that there are these new features on the surface [of Mars] and they could still be active, Mars is still doing things.

- Nick Teanby at the University of Bristol, UK, says

Mars in a Minute: Are There Quakes on Mars?

Possibility Of Life On Mars

The more we learn about Mars, the more we realize how much it has evolved during its 4.5-billion-year history. Sedimentary rock layers and the presence of watery minerals point to a wetter past for Mars than its current appearance as a windswept, red-dust ball. If we knew how Mars changed, we might be able to see how our world is both the same and different from that of our neighbor.

This has effects on the search for life in the galaxy as a whole because it's important to know what makes a planet habitable or uninhabitable to figure out if an exoplanet is, in fact, habitable.

The possibility of life on Mars is similarly an open subject. According to scientists, lakes of liquid water may exist below the surface. It's also possible they aren't, but if they are, they'll need a way to keep warm if they want to be inhabited. This might be achieved by the presence of magma.

There's no denying the allure of the idea of Mars having a gooey core, and Cerberus Fossae seems to be the best spot to investigate this possibility.

Insight has just recently discovered big marsquakes on the other side, in the Southern Tharsis region, and "so far, no other tectonic feature on the InSight hemisphere of Mars has been definitively shown to be seismically active," the researchers write.

The Cerberus Fossae provides a unique perspective on Mars' tectonics as a whole since "no marsquakes at all have been unambiguously localized on wrinkle ridges or lobate scarps, that is, contractional characteristics."

By analyzing the spectrum features of the waves, the researchers concluded that magma was probably present under the surface in the area. Typically, low frequencies like the ones they detected can only be found in volcanic regions. Satellite pictures that prove the discovery show dark clusters of dust around the site, meaning there has been volcanic activity there in the last 50,000 years.