Poketwo - This Game Brings The Pokémon Experience To Discord 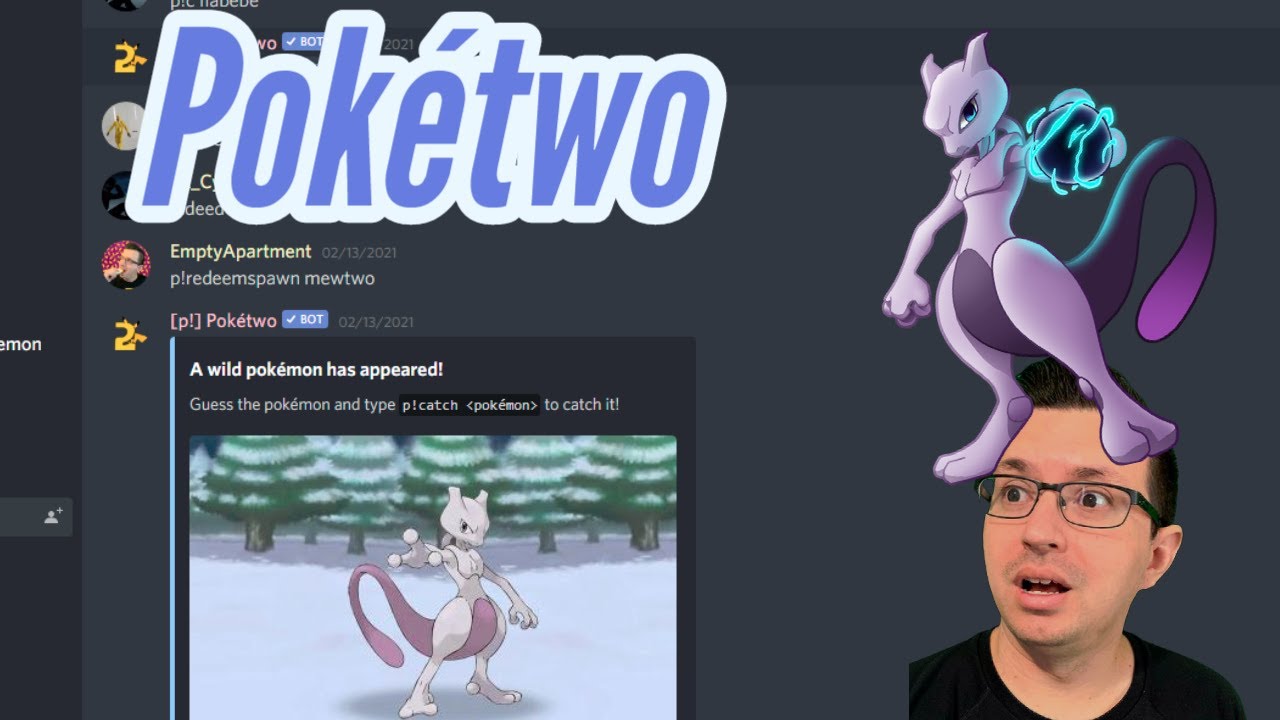 PokeTwo is a Discord Pokemon game bot that was inspired by the original Pokecord . It's the most similar to Pokecord so far, while MewBot and PokeMeow are more unique.

If you know how to play Pokecord, you're pretty much set for PokeTwo, but we'll go over everything for new or confused players!

How Do Pokemon Appears In PokeTwo?

Please read this section because many people appear to misunderstand the basic concept of this bot! If you've played Pokecord, you're already up to speed. Every time someone posts a regular chat message in PokeTwo, a Pokemon may spawn in response.

This means no chatting and no Pokemon at all! There are also anti-spam features that limit the number of times a single person can spawn a pokemon: one person spamming repeatedly will not spawn Pokemon.

The best way to spawn pokemon is (shockingly) a large group of people having a genuine conversation and conversing back and forth! Yes, that is what PokeCord was created to encourage!

Only genuine, back-and-forth chit-chat generates Pokemon! There is no spawn command or anything of the sort, so spamming the chat with repeated lines from one person will not reliably generate pokemon!

Most people overlook the fact that Pokecord was created to encourage chatting on a Discord server. You're playing Pokecord clones incorrectly if you're sitting silently waiting for Pokemon.

To get Pokemon to spawn, say hello in a general chat channel and start a conversation. The only exception is if you purchase incense, which will spawn a pokemon every 20 seconds for an hour.

PokeMeow or Myuu are better if you just want to force Pokemon to appear. There is no bot that constantly spawns pokemon with no input, as some people seem to want. Also, PokeTwo's spawn rate appears to have been drastically reduced.

All you need to play PokeTwo is a Discord server with the bot enabled. Only genuine back-and-forth conversations between multiple people reliably spawn pokemon. To spawn mons, speak normally in populated channels.

You can either add the bot to your own server or join the PokeTwo official server. It makes no difference which server you play on; there is only one'save file' for the bot that travels with your Discord account.

The official server will be overcrowded, and a large number of pokemon will spawn (but many people will be there to catch them). Your own Discord server will be quieter and easier to catch pokemon, but there will be fewer of them.

Also, expect some moderation if it's on your own server; it is recommended to keep PokeTwo in a single channel that people can mute (or even require a role to see the PokeTwo channel) if it's too annoying.

Once the bot has been installed on your server, pokemon will begin to spawn based on the time and number of posts. To begin, type p!start, then p!pick (starter name) to select a starter. If you want Pokemon to only spawn in a specific channel, use p!redirect (#channelname).

When a pokemon appears, the first person to correctly p!catch (pokemon name) it wins. If you don't recognize it or can't remember it, p!hint will give you a hint. p!c can be used as a shortcut for catch.

Bots can be annoying, so limit PokeTwo's Send/Manage Messages permissions to only the channels you want in your Server. Because Pokemon spawn in this manner, it is best to leave Read permissions enabled.

There is no limit to the number of pokemon you can obtain, so there is no reason (other than politeness) not to catch one. Consider allowing other players to catch pokemon you already have on a server with friends (or, alternatively, catch them and trade them to whoever wants them for free).

To avoid having to go through the entire pokemon list every time, add all of the pokemon you intend to duel with to your favorite list. It's worth noting that few people bother to battle; it's mostly a collection game.

In commands, Pokemon are always referenced by number rather than name, so this will help you find the numbers quickly. Pokemon can be leveled simply by chatting in a Pokétow-enabled server; however, only your active pokemon gains experience in this manner, so make sure to choose who you want to raise.

Without an Everstone (available in the P! Shop), Pokemon that can evolve via level will evolve at that level with no prompt to cancel. There is no command for levelling up. Pokemon level up more slowly than Pokecord.

The PokeTwo Evolution Guide For Any Pokemon

In the actual Pokemon games, most Pokemon evolve in precisely the same manner, through levels, evolution stones, items, trades, etc. PokeTwo attempts to replicate every aspect of the situation.

If you believe your Pokemon should be able to develop, use p!evolve. P!dex can teach you about the evolution required (pokemon).

Try it for Pokemon with strange unlocks like Inkay, and you'll notice they've typically been granted a level-based unlock. Pokemon's prerequisites may be checked with p!pokedex (pokemon).

Pokemon that require trading must still be done so with p!trade, and those that require things must be purchased from the store with p!shop.

Which Is Better Poketwo Or Pokecord?

Poketwo is one of the best Pokemon bots available. This Pokemon bot gained popularity after the well-known Pokecord bot was shut down. Several Pokecord alternatives attempt to provide the same experience, but Poketwo is currently the best.

No, PokeTwo does not cost any money, it is entirely free.

How Often Do Pokemon Appear In Poketwo?

In PokeTwo, there is a chance that a Pokemon will spawn in response to each standard chat message that is posted. This means that you can never chat or play Pokemon. One individual spamming repeatedly won't create Pokemon due to anti-spam measures that restrict how frequently one person may spawn a pokemon.

Yes, there are Poketwo Cheats. You can find it at LibHunt.

What Is The Best Poketwo Server?

Discord now has a Pokémon experience thanks to Pokétwo. Catch randomly spawning pokémon in your servers, trade them to add to your collection, battle your friends for rewards, and more. Everything is open source and free to play. You will definitely enjoy playing this game.