France's Longest River Dries Up Due To Extreme Heat 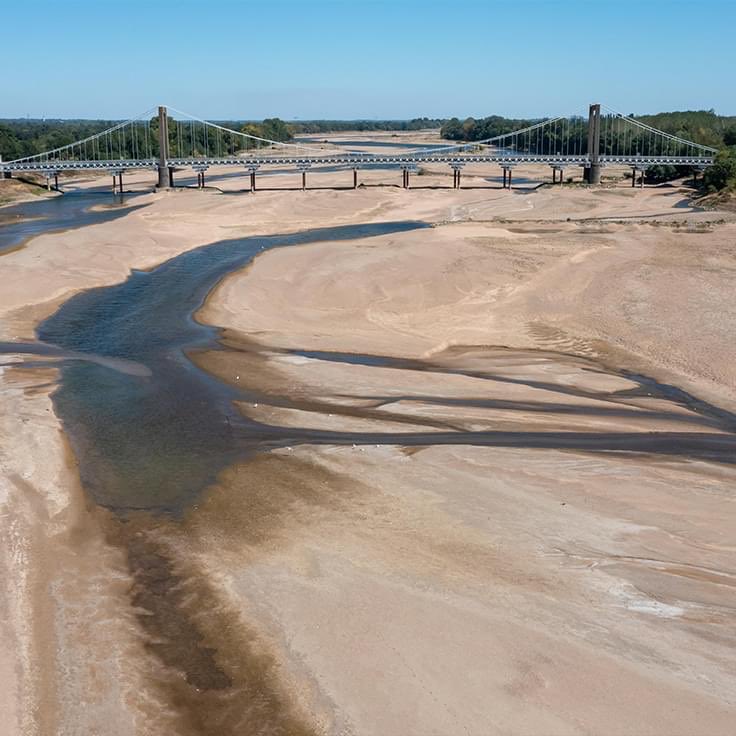 In some places, the longest river in one country is almost completely dry because of the oppressive heat wave in July and the lack of rain.

This happens when France's longest river dries up due to extreme heat.

France is one of the European countries that just went through a terrible heat wave in July. Hundreds of people died across the continent because of the heat wave.

But people weren't the only ones who had to deal with the fact that important waterways dried up quickly this summer.

The Loire is the longest river in France. It starts in the southeast and flows southwest, coming within 75 miles of Paris, before turning west and flowing into the Atlantic.

The water level in the Loire has reduced to a point that residents may wade from one bank to the other, as was shown in broadcast footage on August 11.

I remember episodes of heat and a lack of water when I was a child. Now, last year, we had a very rainy summer. This year, we have a very dry summer. From one year to the next, the most difficult thing is that these are completely different episodes, seasons that you can't guess in advance.

AccuWeatther Meteorologist Mary Gilbert says that record-breaking temperatures are on the way again. She also said that Europe is still dealing with the effects of the deadly heat in July.

"Portions of Northern Europe will begin to sizzle once again later this week as high pressure and unseasonable air settle in. These very hot conditions will stick around through much of the weekend," Gilbert said.

According to Gilbert, the temperatures that threatened to break records appeared to have started as early as Thursday across a significant area of the United Kingdom and northern France.

"The lack of sufficient rainfall across the region this summer has led to drought conditions across a wide swath of Northern Europe. When the soil is so dry, it is able to heat up faster and to a higher level than moist soil. This feedback loop turns hot weather into dangerously hot weather."

Longest river of France is dried up today@sciencedawn

One Reddit user posted the following comments to warn people who want to know what happens when they go down the bridge:

You better not jump the gun to go looking because that's straight quicksand right there folks, you will get stuck up to your waste, seen it here in Lake Mead as people try to explore coves that have recently dried up! It's very dangerous terrain, give it time to dry out before you go exploring.

Almost all of France is now under some kind of water restriction, and as supplies run out, tap water has been cut off or rationed in many places.

A drought caused by the climate crisis and made worse by an unusually hot summer has dried up many underground water supplies, but the country's rivers are also affected.

In July, parts of the Iberian Peninsula got as hot as 116 degrees Fahrenheit, while the UK issued its first-ever "extreme red heat warning" and had to stop flights at London Luton Airport because the weather had damaged the runway.

Wildfires in the south of France forced tens of thousands of people to leave their homes.