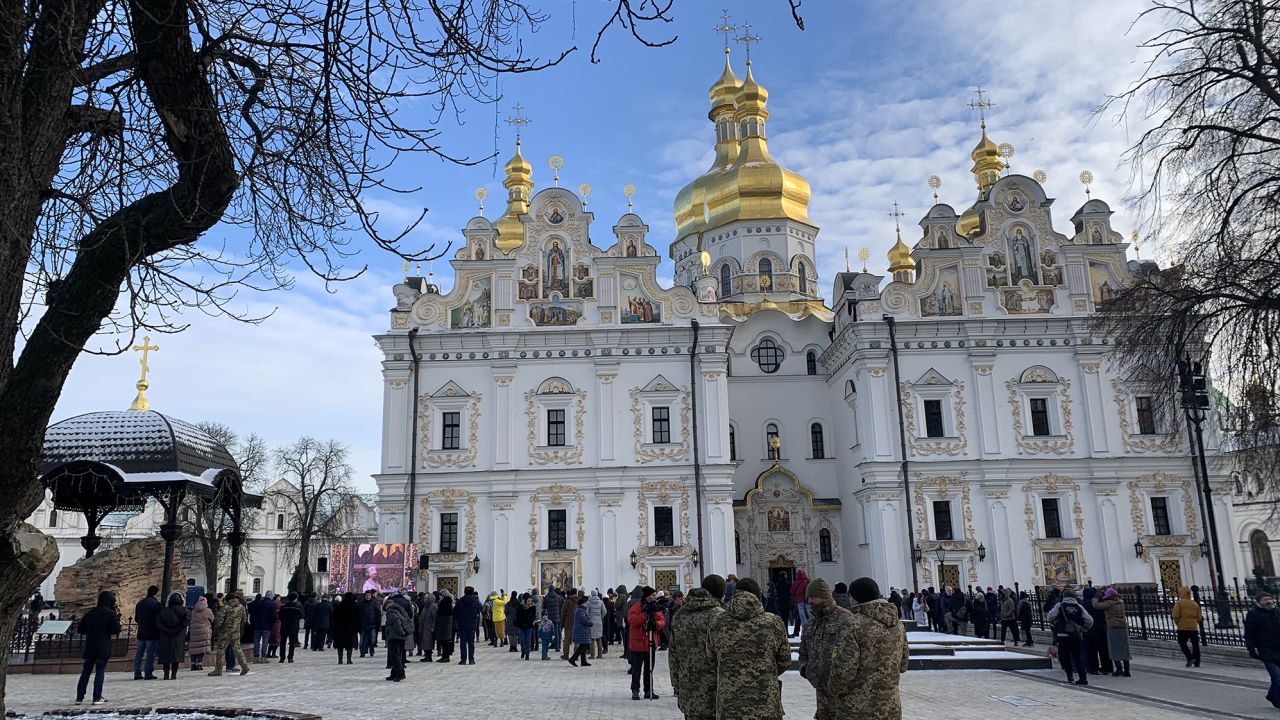 A former church associated with Moscow claims religious persecution. The greatest Orthodox church in Ukraine is in turmoil due to its continuous ties to Moscow. It confronts a ban from the Ukrainian government, security agency raids, and internal strife.

The video shot vertically and released in November 2015 does not depict any weapons, atrocities, or soldiers on the battlefield. The sound of a patriotic Russian song reverberating through a church on the grounds of Kyiv's famous Lavra monastery appeared to open a new front in Ukraine's war with Russia.

In a sermon delivered several days after the schism, Patriarch Kiril prayed that "temporary external obstacles will never destroy the spiritual unity of our people."

A few days after the video was released, masked members of the Ukrainian Security Service (SBU) conducted a raid on the Lavra to prevent it from being used for "hiding sabotage and reconnaissance groups" or "storing weapons."

By December, a handful of church leaders had been sanctioned, and dozens of churches across the nation were raided by the SBU; however, the searches yielded only a few Russian passports, symbols, and books.

There was no mention in the findings of weapons or saboteurs. What they said they found was printed matter, documents, which are not prohibited under Ukrainian law.

However, there is a great deal of ambiguity. The Security Service of Ukraine (SBU) informed CNN that storing Russian propaganda is not illegal, but distributing it is. It was said in the declaration that "whether such material is in the library of the diocese or on the shelves of a church store, it is apparent that it is designed for broad distribution."

It stated that the raids on the Ukrainian Orthodox Church were motivated solely by concerns for national security. You can't use religion as an excuse here. But a spokesman for the Russian Orthodox Church, Vladimir Legoyda, called the raids a "act of intimidation."

Why Ukrainian Orthodox Church Is Being Targeted?

Ukraine's "spiritual independence" is at stake, thus at the beginning of December, President Volodymyr Zelenskyi said that the Ukrainian state would prohibit "religious organizations linked with centres of influence in the Russian Federation" from functioning in Ukraine. A handful of clergy members have also been targeted with sanctions.

Members of the church allege they are being persecuted by the government and that they are unsure of what will happen next. Churches and monasteries in Ukraine are routinely searched by the SBU, who say they are on the lookout for weapons and saboteurs.

The new head of the SBU, Vasyl Malyuk, may want to boost the agency's reputation, which might explain the recent uptick in interest in the religion. It was reported in November that the group had uncovered 700 pro-Kremlin collaborators among its ranks.

It's also possible that Zelenskyi's new group of advisors had a role. Recently, the president has revealed that he is meeting with Viktor Yelenskyi, a prominent religious researcher who calls for a ban on the Moscow-linked Ukrainian Orthodox Church, on matters pertaining to the church.

For over 30 years, the UOC leadership has been "poisoning individuals with the ideals of the Russian world," according to Professor Viktor Yelenskyi, Ukraine's newly designated religious freedom investigator. The SBU's raids, he said, were similar to the post-9/11 assault on Islamic radicalism. For the time being, at least, "religious freedom is still secure in Ukraine."

Yet, at the end of 2022, the government rejected to extend the church’s lease on its vast, central Lavra cathedral and gave over the keys to the identically titled, but wholly independent Orthodox Church of Ukraine (OCU) (OCU). This year was the first occasion that the rival OCU held their Orthodox Christmas liturgy (on January 7) there.

How Controversy Heated Up

The Ukrainian Orthodox Church celebrated this year’s Christmas liturgy in a smaller church down only steps from the cathedral. A student at the lavra seminary named Kyrylo Serheyev said that he has been praying for the Ukrainian armed forces more often this year. He further claims that "our patriotism is not growing diminished" despite government penalties and monitoring of his church.

Viktoria Vinnyk expressed regret that this year's Christmas service will not be held at the city's main church. She is fluent in Russian yet has never visited Russia.

I hope for better in my country. And I hope that the situation will change.

Not only has the cathedral changed ownership, but so have other places of worship. A modest chapel has stood on a hill above the frozen lake in the town of Vita Poshtova, just outside of Kyiv, since the time of the Soviet Union.

It’s the only one in the village. The congregation elected in September to separate from UOC and become the autonomous OCU. Olha Mazurets, a member of the congregation, said she felt uneasy about the church's ties to Russia.

It’s a matter of identity and self-preservation. We must identify our enemy too.

People didn’t pay attention to whether it was a Ukrainian or Russian-speaking church, they were coming to God. But when the war started, everything changed.

Klyment claims that since the conflict broke out, as many as 400 of Ukraine's UOC's 12,000 congregations have switched to the OCU. There have been 19 charges brought against clergy members and 5 convictions, according to the security services, since the full-scale invasion started.

UOC priest Andriy Pavlenko was convicted in December and sentenced to 12 years in prison for providing Russian forces with intelligence about Ukrainian positions in the Donbas. He was transferred to Russian custody as part of a prisoner swap a week later.

Klyment admits the culpability of that priest, but he thinks the claims against the Vinnytsia priest who was convicted last week for spreading pro-Russian propaganda are baseless. He feels the church as large is being unjustly smeared.

During his December 1st state of the nation speech, President Volodymyr Zelensky said he was willing to go farther than raids in the name of "spiritual independence" by proposing a law to prevent churches with "centers of influence" in Russia from functioning in Ukraine.

We will never allow anyone to build an empire inside the Ukrainian soul.

But Klyment feels the legislation would just force his religion underground.

What else do you call persecution if not this?

The church belongs to the Ukrainian Orthodox Church (UOC), which, despite its name, has traditionally been loyal to the Russian Orthodox Church, and whose current leader, Patriarch Kiril, has openly backed Moscow's brutal invasion. The UOC's leadership, after parting ways with Kiril, condemned Russia's attack and declared its independence from Russia in May of last year.