The Slur That Must Not Be Named

RedState is on a tear against President Obama for this second-hand quote, supplied by Rep. Earl Blumenauer (D-Ore.) to The New York Times.

Does anybody think that the teabag, anti-government people are going to support them if they bring down health care?

This, says a RedState blogger, is “pornographic” and “name-calling.” I think that’s a bit much. Is there some way to talk about people who wave around tea bags to make political points without mentioning the tea bags? Generally, I think there is, and I go to some lengths not to make crude jokes when I write about the Tea Party movement. But like many slurs devised by a movement’s opponents, I’ve heard this slur being co-opted by the people working the Tea Parties. I’ve actually talked to Tea Party activists who referred to themselves as “Teabaggers.” And at the 9/10 pre-March on Washington event at the D.C. Armory, I bought this button on sale from a vendor: 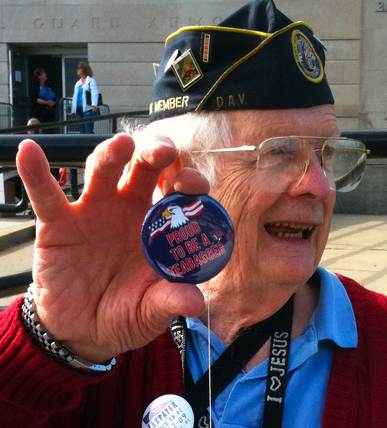 If the Tea Party activists and their allies are going to take offense at certain terms being applied to them, they should probably avoid self-identifying with those same terms.