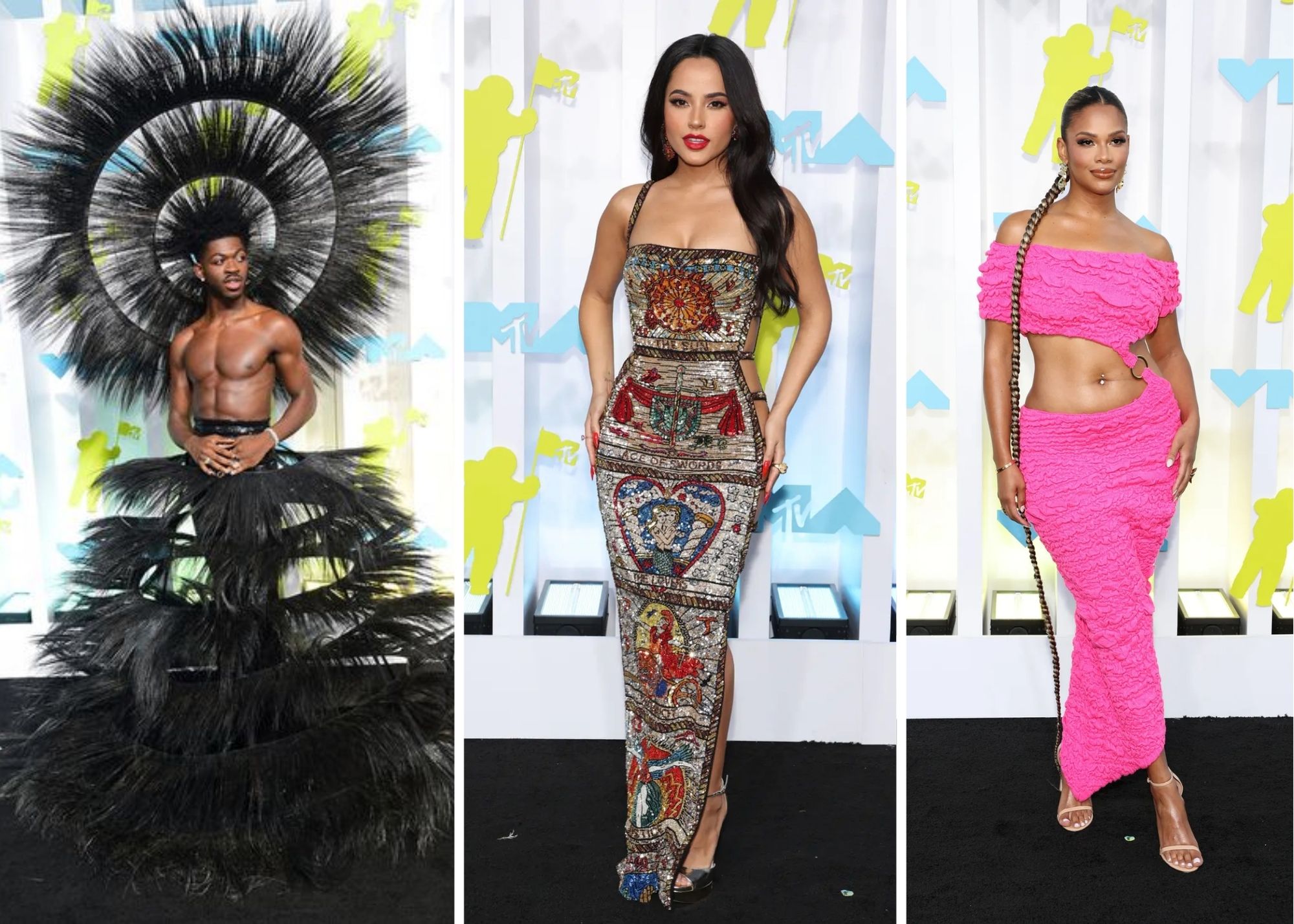 The red carpet photo ops at the MTV Video Music Awards are a tough showdown where many famous people show off their fancy and beautiful outfits (VMA). Who would you pick if asked? No matter what you chose, everyone who came to this event should be appreciated.

This article presents the 2022 MTV VMA red carpet featuring head-turning outfits. Nicki Minaj, Sabrina Carpenter, and Kamie Crawford, among others, bared their bodies or wore pink from head to toe, or both. In addition to pink, black was the color of the night, as Lili Reinhart and Lil Nas X wore black lace and feathered headpieces.

The following stars had the best outfits at the 2022 MTV VMAs, per Glamour. Glamour is the world's largest fashion and beauty media brand, reaching one in eight American women. Prepare to be blown away by their unique styles and designs! 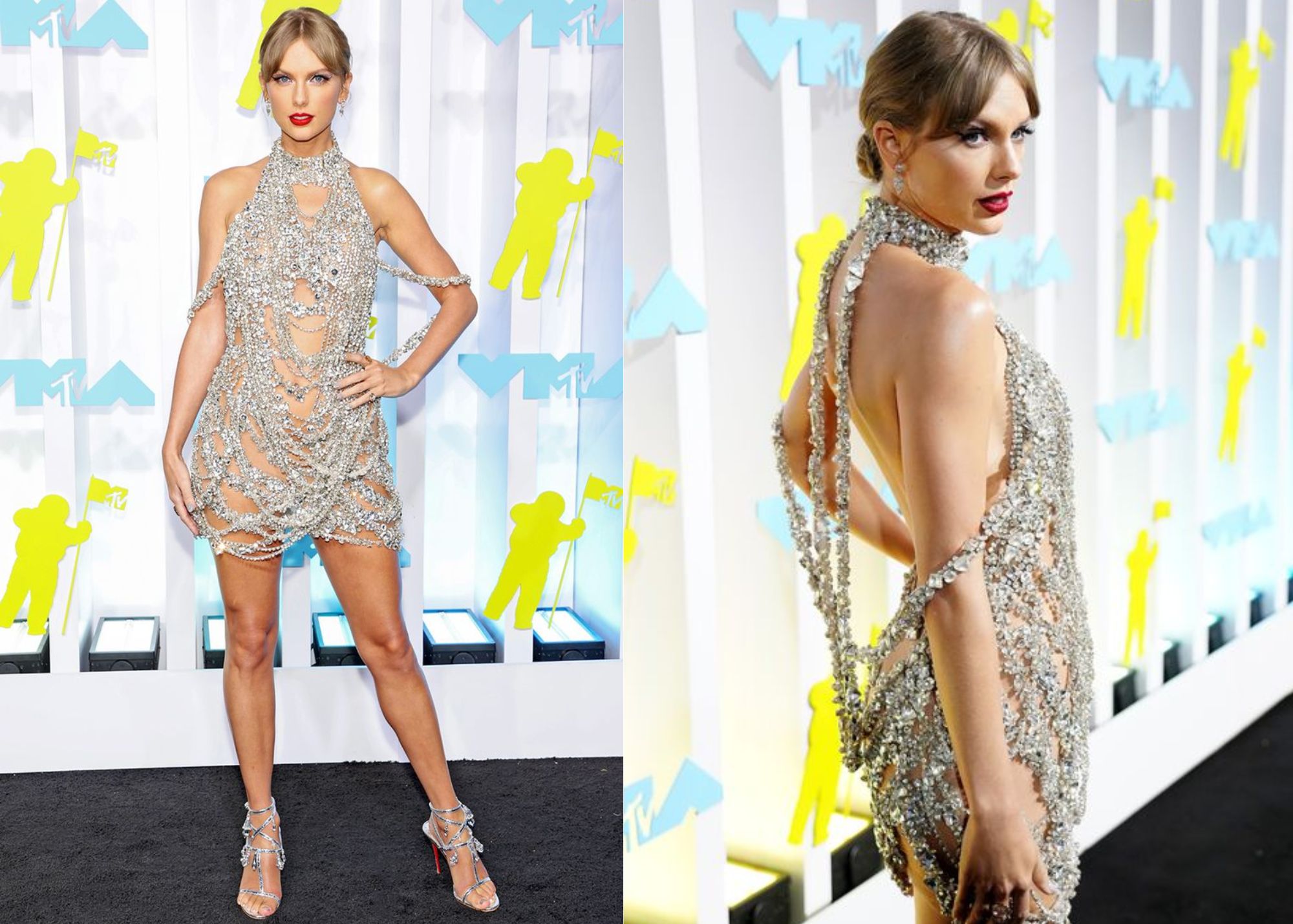 Taylor Swift hasn't been to the VMAs in three years, but she's back this year with a dress full of crystals. Swift, who is 32, looked like a beautiful jewel in a sparkling Oscar de la Renta dress with thousands of sparkling stones.

She wore it with chandelier-style Christian Louboutin heels and Lorraine Schwartz diamond drop earrings and rings for even more shine. She pulled her hair back and split her bangs down the middle. For extra glam, she added a swipe of her signature red lipstick and a cat-eye with crystals.

Swift is up for Video of the Year, Best Longform Video, Best Cinematography, Best Direction, and Best Editing for her short film "All Too Well," which also stars the "Stranger Things" actress Sadie Sink.

It was unexpected when Taylor Swift showed up at the MTV VMAs red carpet in a rhinestone naked dress—a far cry from her cottagecore aesthetic from the recent Folklore and Evermore era. It was seen as a sign that a new album cycle is upon us. I’m loving this glam-rocker, va-va-voom vibe. 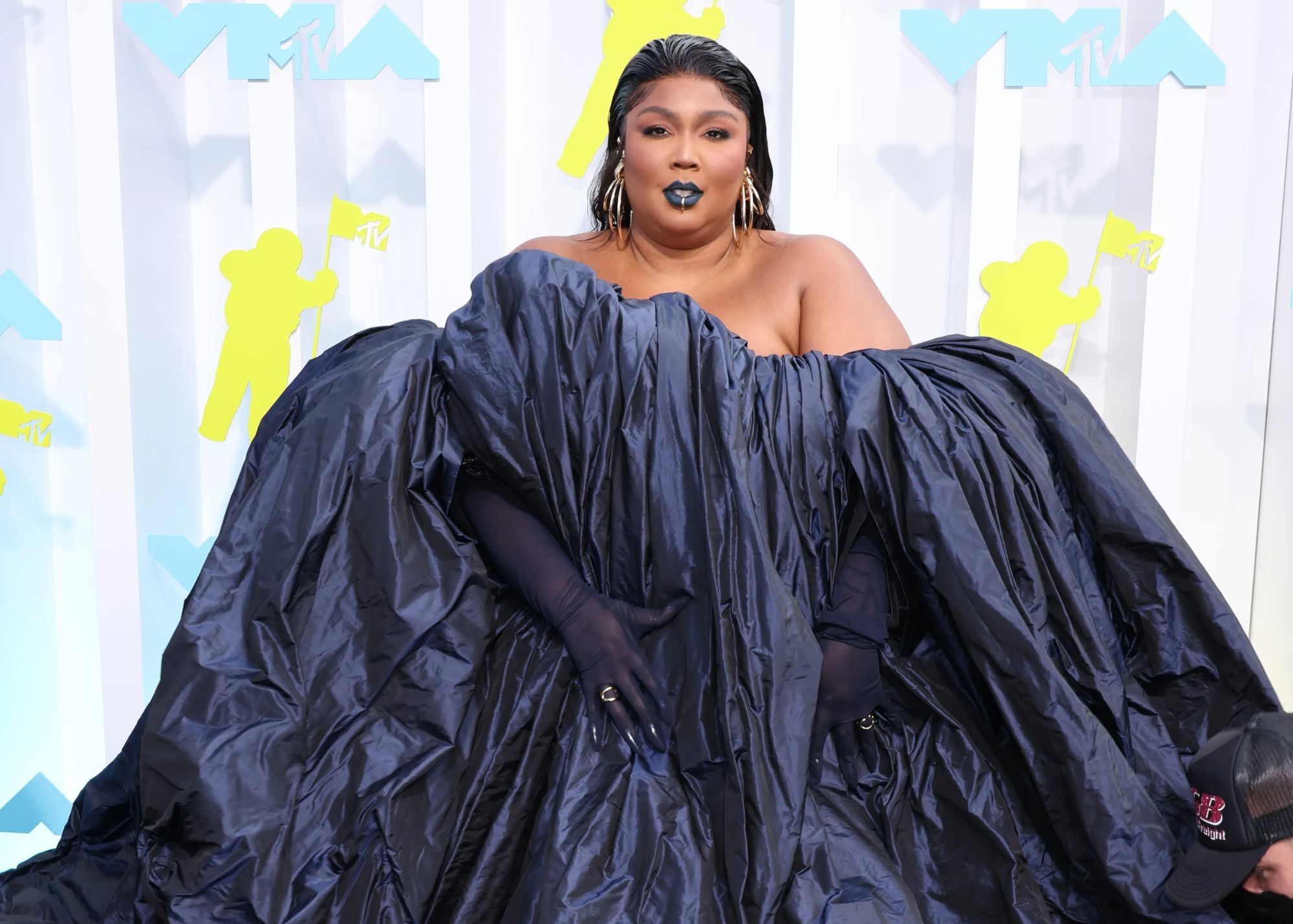 At the 2022 VMAs, Lizzo wore a gargantuan navy blue gown with a lip ring

Lizzo looks "good as hell" on the red carpet at the 2022 VMAs. The singer and flautist wore an eye-catching dark blue Jean Paul Gaultier dress to the awards show. It was the same color as the dress she wore to the BET Awards in 2022.

Lizzo wore lipstick in a blue-black shade, gold hoop earrings, and a lip ring among the couture-inspired accessories that Lizzo wore with the outfit. The singer, whose album "Special" was released in July, is nominated for five Video Music Awards this year, including artist of the year, song of the summer (for "About Damn Time"), and song of the year. "Special" was the name of the singer's most recent studio album (also for "About Damn Time").

However, in the days before this red carpet moment, comedian Aries Spears made degrading and fat-phobic comments about Lizzo on the "Art of Dialogue" podcast. When a short clip of the podcast was shared on Twitter, it quickly gained widespread attention.

The comedian remarked that she's got a lovely face, but all she does is expose her breasts. Fans rallied to Lizzo's defense. One Twitter user, tenilleclarke1, wrote in the comments section:

"Aries Spears is a fragile child who is throwing a tantrum because Lizzo is living in her authentic truth and his ugly rant is a failed disguise for the hurt he feels for the lack of support in his career as a fat Black entertainer. THIS is what you call projectionism. Really sad."

I love the look because of its volume. I’m a plus-size woman myself, and there are so many rules around making our bodies look as tiny as possible. The fact that Lizzo looked so comfortable in such a voluminous, over-the-top dress, taking up space as she rightfully should, is more than enough reason for me to love it. 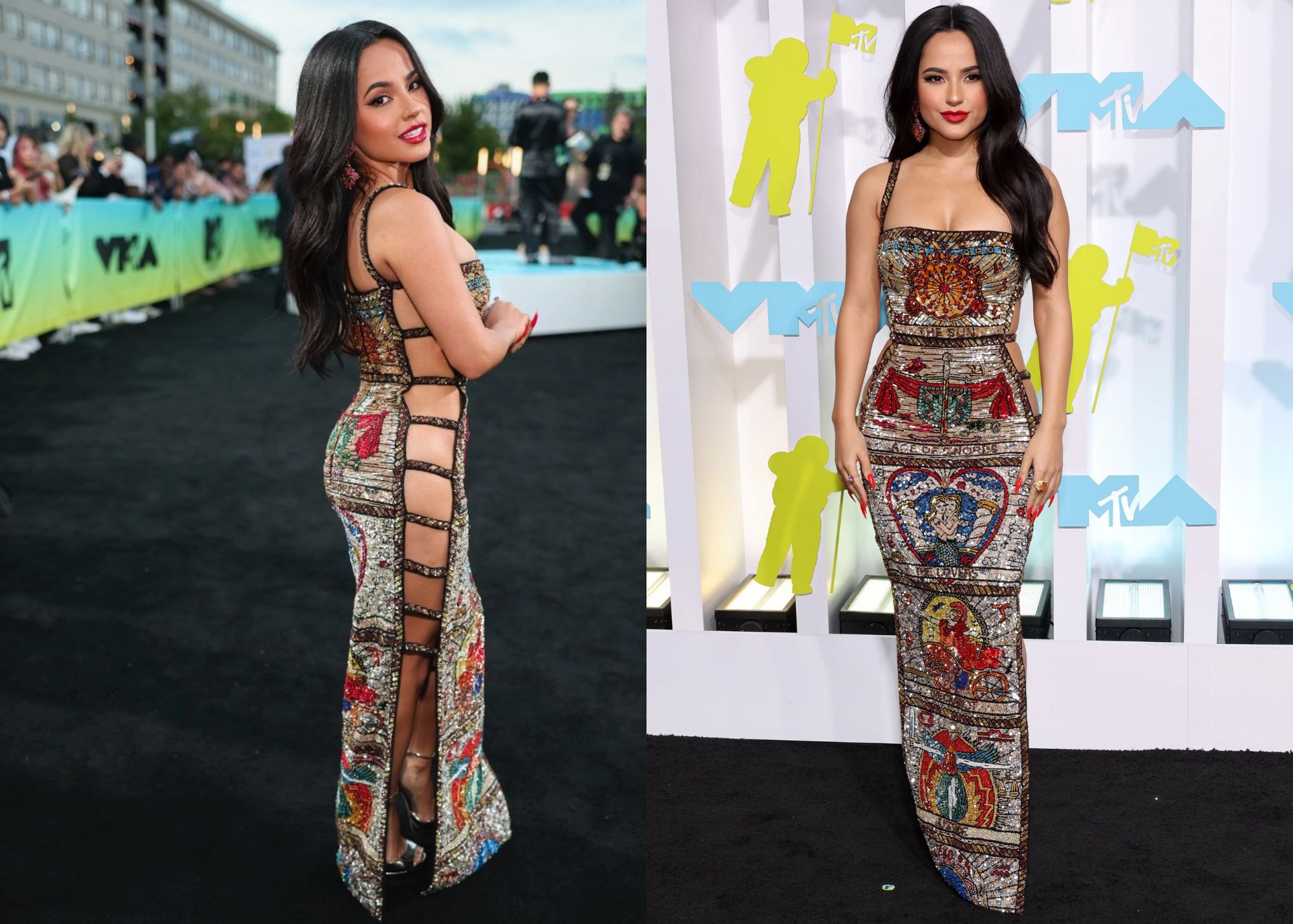 The front of the outfit had embroidered tarot card images of the Sun, Lovers, Ace of Swords, Chariot, and Justice. Becky G's bustier had a red and orange crystal sun that was on fire, a baroque sword, ruby-red curtains, mermaids in a blue sea, a warrior with a yellow sun behind him, and other details.

Becky G resembled The Empress in a dress that reflected the spiritual theme of the collection. The singer wore long, black waves, bold black eyeliner, and red lipstick with orange undertones to match her crystal-embellished gown.

I’m obsessed with this Zuhair Murad gown that Becky G wore tonight. It was nice to see some sparkle on the carpet compared with all the black, and that red lip is everything!

Lil Nas X Dresses Up In A Feathered Skirt And Headpiece 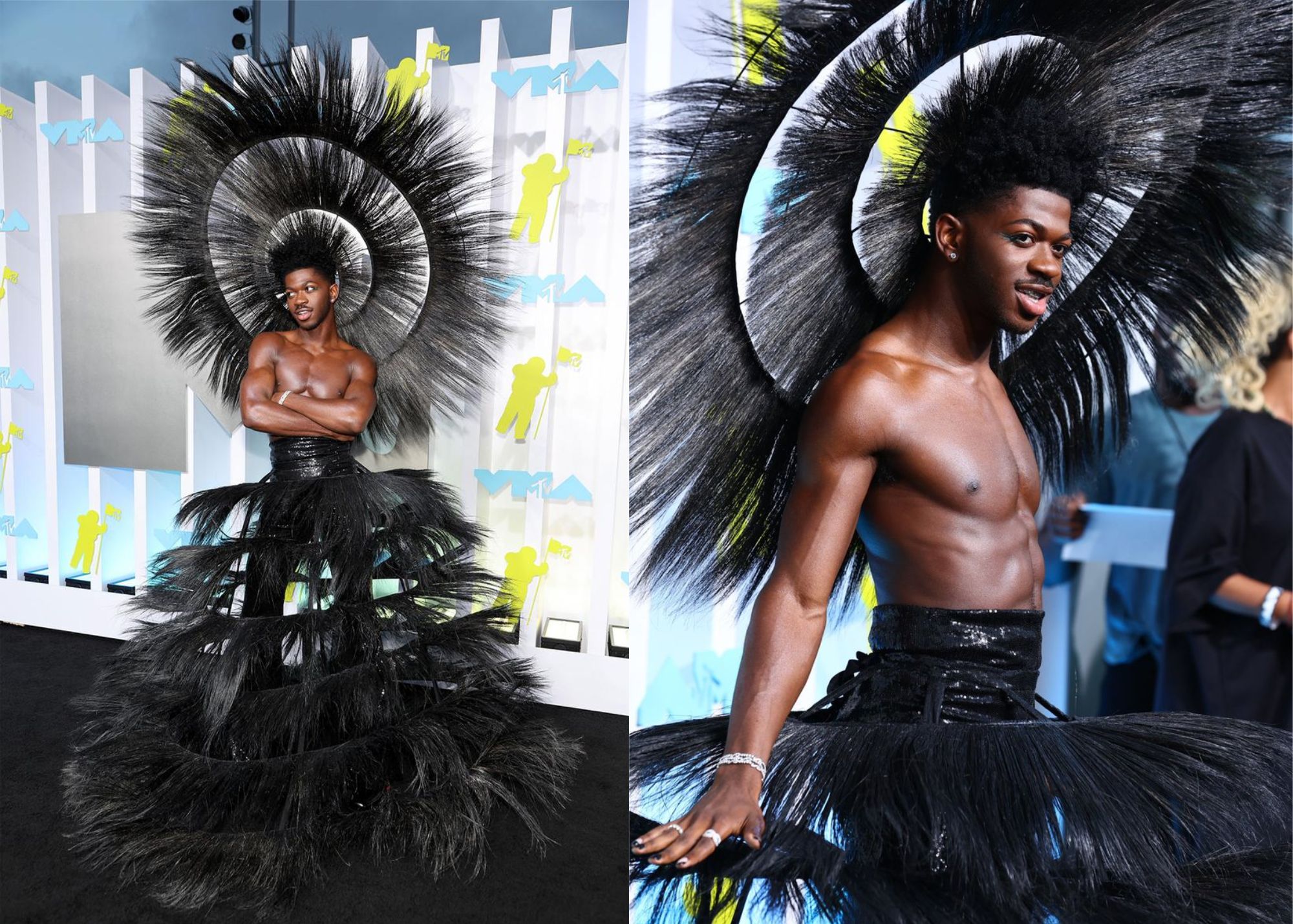 If you look at the photo above, you will agree that Lil Nas X is the only person who can make men's clothes interesting! Lil Nas X is his stage name, but the singer's true name is Montero Lamar Hill.

The singer didn't wear a standard suit and tie to the MTV VMAs in 2022, unlike most of the other male celebrities. Lil Nas, however, dominated the black carpet in an all-black, feathered outfit. Harris Reed, a British-American designer, gave the "Industry Baby" singer a tiered overskirt and a matching headpiece with thousands of feathers.

The long black dress almost reached the floor and was covered in cutouts that were accentuated with chains for an edgy look. Lil Nas X wore black boots with the dress and an oversized black blazer. The cutouts and chain add a contemporary edge to the otherwise '90s-inspired punk and grunge aesthetic.

As he moved, Lil Nas's chest, arms, and legs were subtly revealed by the dress that had been custom-made for him. In the event, Lil Nas X is up for artist of the year, along with Lizzo, Jack Harlow, Bad Bunny, Drake, and Harry Styles, all of whom are well-liked by fans. However, he had to change into more comfortable attire for the show.

Lil Nas X showed all the way out in a tiered, feathered, two-piece ensemble by Harris Reed. It was ridiculous in the best way—because if you’re not struggling to walk down the red carpet at the VMAs, you’re not doing it right. 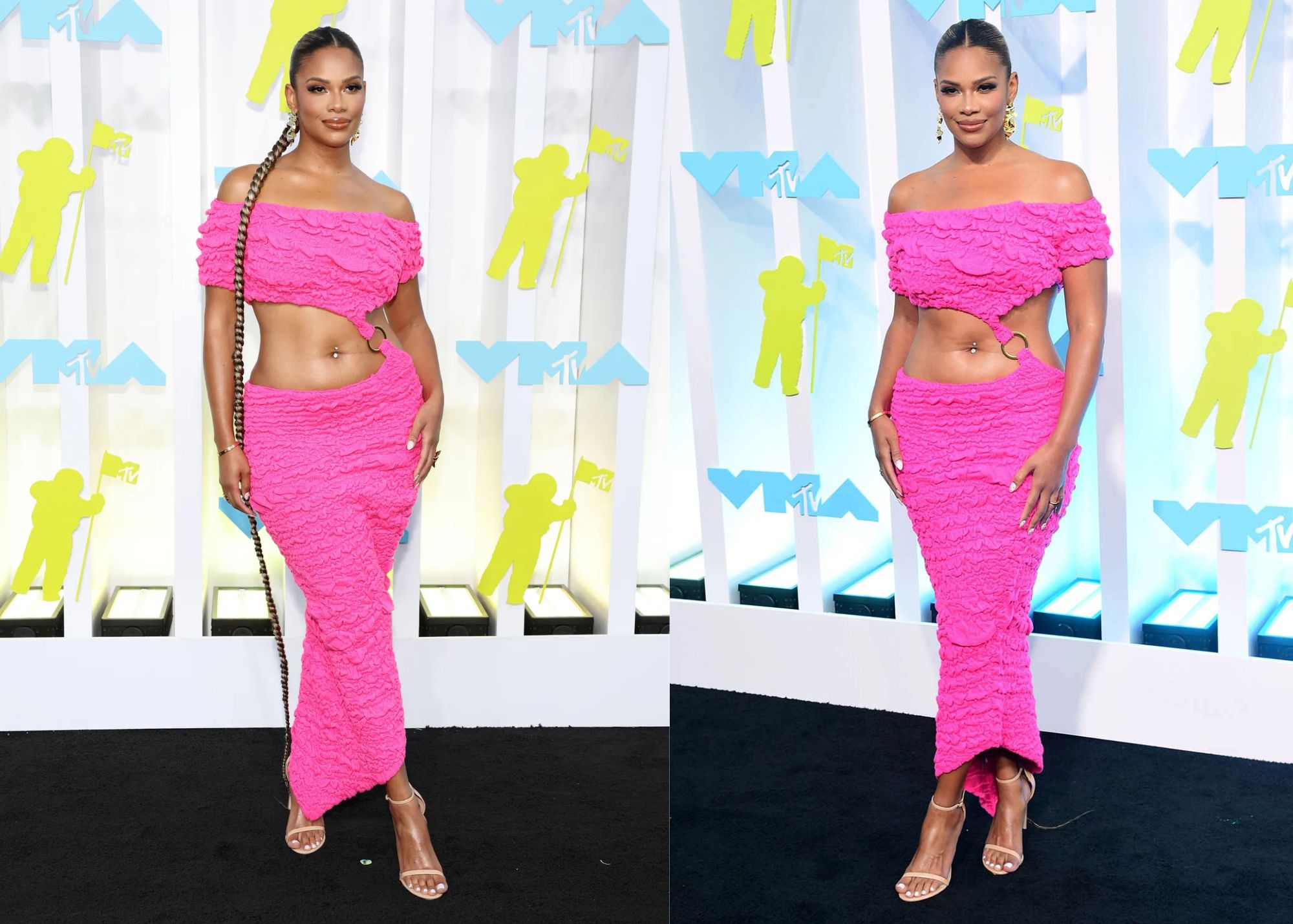 "Hanifa is also a company run by a small group of women, whose website notes that they believe that women should be empowered to break barriers, achieve excellence in every aspect of their lives, and make their own rules.

When my stylist Jenny showed me this look from Hanifa, it was a no-brainer for me, I didn’t try on any other look because I knew this would make for the perfect VMA’s moment! Hanifa was founded by a Black designer from my hometown and I’m honored to wear her designs."

Monique Wilson, an editorial assistant for Glamour, said that this pink Hanifa dress and the long braided ponytail are everything. She is following the Barbiecore trend of the summer and looks great doing it. 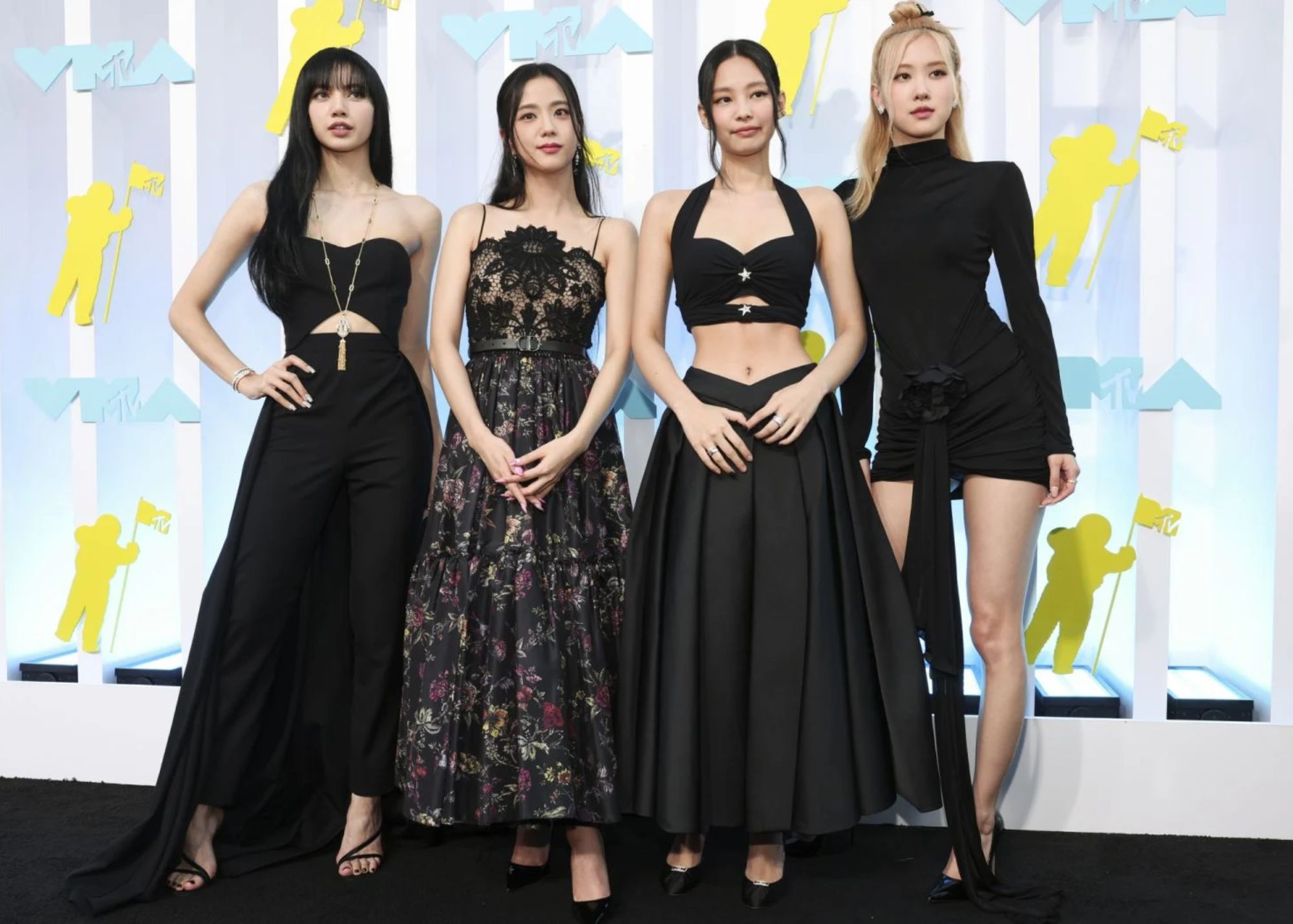 The members went to the awards ceremony looking glam in all black, wearing pieces from the brands for which they are global ambassadors. That night, they were nominated for and won several awards.

The members went to the awards ceremony looking glam in all black, wearing pieces from the brands for which they are global ambassadors. That night, they were nominated for and won several awards. For Jennie, the singer of "Solo", strutted down the red carpet in a Chanel crop top and skirt. She also wears a pair of heels from Chanel's Resort 2023 line.

Like Jennie, the Thai K-pop star's outfit was made just for her by Celine. Lisa looked fierce in a tube top with cutouts that went all the way to the floor, black pants, and heels.

The singer of "On the Ground," Rosé, went for a more sophisticated look by becoming the global ambassador for Yves Saint Laurent. The singer chose that pretty black dress. She wore the brand's shiny jersey-draped dress. She wore gold jewelry from Tiffany & Co. and 115 patent leather pumps from Gianvito Rossi with the dress.

And finally, Jisoo wore Dior, which made her look like a princess. Jisoo also wore a dress from the brand's Cruise 2023 line that was made just for her. She wore the brand's D-Moi patent leather heels with her tea-length dress.

Hanna Lustig, staff writer of Glamour, wrote a comment where she stated:

Chanel ambassador Jennie Kim of BlackPink looked unbelievable in this exquisitely tailored two-piece set. Pairing a black halter crop top studded with silver stars and a pleated V-waist maxi skirt, the look was a fresh take on the little black dress that still managed to feel classic and glamorous.

Check out the 2022 Video Music Awards Red Carpet with hosts Nessa, Kevan Kenney, and special guest Tate McRae, who is a celebrity correspondent. Watch the 2022 VMA's!

Why Olivia Rodrigo Didn't Go To The MTV VMAs In 2022

Olivia Rodrigo didn't spend her Sunday at tonight's MTV VMAs, even though she was one of the guests with the most nominations. It's not clear why she didn't go. Rodrigo didn't say where she was on social media, though her last post showed her in New York City, not too far from where the VMAs were held.

"Brutal" by Rodrigo is up for Video of the Year; "Traitor" for Best Pop Song, "Driving Home 2 U" for Best Longform, and "Brutal" for Best Editing. Rodrigo may have decided to skip the ceremony because she isn't performing and is up for awards in categories that aren't as important or are very competitive.

The 2022 MTV Video Music Awards took place at the Prudential Center in Newark, New Jersey. LL Cool J, Nicki Minaj, and Jack Harlow were in charge of running the show. Minaj's fans gave her the Video Vanguard Award, which was a big deal.

How Much Are VMA Tickets?

MTV Video Music Awards tickets typically cost between $45 and $100, with an average starting price of around $60. Balcony seats are typically the cheapest, with orchestra and reserved center seats costing closer to $250. VIP and premium seating options can cost up to $300 per person.

How Do You Get Tickets To Award Shows?

Tickets for some shows are available directly from the event sponsors. Always book early because seating is limited. The American Music Awards, Billboard Music Awards, Country Music Awards, and MTV VMA Awards are already open to the public.

The MTV Video Music Awards are an event that celebrates and honors some of the most creative and innovative musicians in the music industry.

The MTV Video Music Award was another night to remember thanks to a great lineup of performers, nominees with big names, and a trio of famous hosts.

There were no letdowns on the red carpet at the 2022 MTV Video Music Awards.