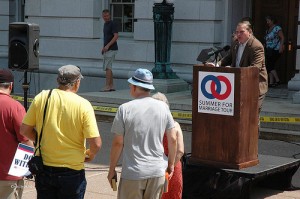 In 2010, the National Organization for Marriage (NOM), a tax-exempt nonprofit trying to thwart the legalization of same-sex marriage throughout the U.S., reported the highest individual donations it has received since its inception in 2007, according to NOM’s most recent income disclosures to the Internal Revenue Service, recently obtained by The American Independent. Per NOM’s numbers, just two individuals contributed more than $6 million to the organization’s political arm – accounting for about two-thirds of NOM’s 2010 revenue, while single donations below $5,000 covered only 8 percent of reported revenue.

This revelation is not extraordinary for NOM, whose existence from the very beginning has been dependent upon large contributions from a small pool of big-money, mostly anonymous donors. But what’s different about this past funding cycle is how much narrower the margin is between $100 contributions and $1 million contributions. And based on NOM’s annual financial reporting to the IRS over the past four years, it appears as though that gap has narrowed over time.

Since the very beginning, NOM has fought tooth and nail to avoid disclosing the names of donors specifically and its financial records generally. The group is embroiled in various legal battles in different states (recently in Minnesota) to avoid disclosure of its political campaign records.

A closer look into the organization’s federally mandated financial disclosures (embedded below) reveal other discrepancies. TAI contacted NOM for comments and clarifications – as we have on many occasions in the past – but the organization declined to respond.

On July 22, former NOM board chair Maggie Gallagher sent TAI an email in response to a question for a story about NOM’s fundraising. “Nom raised and spent $13 million last year,” Gallagher wrote, referring to 2010. She also told TAI that NOM’s projected revenues for 2011 is close to $20 million. “Our fundraising target evolve [sic] as our needs evolve, which is partly a result of our goals, and partly what we need to respond to pro-SSM [same-sex marriage] goals.”

But according to what NOM reported to the IRS for 2010, the organization claims it raised about $9.6 million and spent about $10.7 million.

TAI questioned Gallagher, via email, about the discrepancy between her quote and what is listed in NOM’s 990, but Gallagher declined to respond.

NOM reported spending large chunks of its budget on advertising and promotion ($3 million); employees’ wages, benefits, and taxes ($1.2 million); and on grants and assistance to other organizations ($600,000).

But the largest portion – $4 million, or 38 percent of NOM’s expenditures in fiscal year 2010 – was classified on its federal tax form as “other.”

NOM’s treasurer, Neil Corkery, described its general expenses on the form this way: “The Organization developed and distributed via radio, television, mail, email, telephone, and the world-wide web, a series of advertising and outreach promoting traditional marriage.”

What NOM reported spending on “legal” ($313,746) and “political expenditures” ($206,509) are surprisingly small, given that in 2010 the organization participated in several lawsuits and state-based political campaigns. The Public Access to Court Electronic Records (PACER) shows that in 2010, NOM was involved in at least six different federal lawsuits. NOM has also set up political action committees in various states throughout the country. Last month TAI reported that NOM was one of the top political spenders in Iowa’s 2010 election cycle, making more than $721,000 in independent expenditures.

NOM reported giving grants – ranging from $10,000 to $200,000 – to 11 organizations dedicated to preventing the legalization for same-sex marriage. Two of the donations were for organizations affiliated with NOM: Stand for Marriage DC, a PAC that shares NOM’s mailing address and was created to reverse the legalization of gay marriage in the nation’s capital, and a $200,000 grant to its California PAC (so either NOM gave two separate $200,000 payments to the PAC, or it recorded it twice).

About 96 percent of NOM’s total revenue came from donations. Of the remaining $368,513, $139 reportedly came from investment income; the rest was attributed to “other revenue.”

Who funds NOM and its activities?

Under IRS rules regarding nonprofit entities with 501(c)3 and (c)4 status, all donations above $5,000 must be disclosed. Of the 22 contributions NOM’s (c)4 was obligated to list, all but five were greater than $5,000.

The top five contributions to the National Organization for Marriage, Inc.:

Contributions or gifts to the National Organization for Marriage, a 501(c)(4) organization with QNC status [this is a typo for CNC status – “currently not collective"], are not tax-deductible. The National Organization for Marriage does not accept contributions from business corporations, labor unions, foreign nationals, or federal contractors; however, it may accept contributions from federally registered political action committees. Donations may be used for political purposes such as supporting or opposing candidates. No funds will be earmarked or reserved for any political purpose.

Back in July, Gallagher told TAI that NOM has 50,000 donors. But many of NOM’s critics believe the organization is funded by a few wealthy donors.

“The National Organization for Marriage is primarily a shell group that exists to funnel funding from secret anti-gay donors,” said Evan Wolfson, the founder and president of Freedom to Marry, a national campaign started in 2003 whose mission is to legalize marriage for gay and lesbian couples nationwide. “[NOM] undermines and tries to overturn campaign finance and disclosure laws in states all over the country. They have proven themselves to be untrustworthy.”

In September 2010, The Washington Independent, TAI’s predecessor, reported that Catholic charity group the Knights of Columbus donated $1.4 million to NOM in 2009, an amount that did not appear of NOM’s Form 990.

Concerns about NOM’s secretive nature led to the launch of Nom Exposed, a project developed by the D.C.-based Human Rights Campaign and the California-based progressive alliance called the Courage Campaign.

Courage Campaign founder and President Rick Jacobs told TAI that the Courage Campaign and HRC trailed NOM on its summer 2010 “One Man, One Woman” bus tour across the eastern United States to protest same-sex marriage, and he said that many times the counter-protesters outnumbered NOM’s protesters.

“Most of the time they actually just had one man and one woman show up,” Jacobs said.

Perhaps the man who trusts NOM the least is Fred Karger – least known for his long-shot GOP presidential campaign as the first openly gay candidate, but best known for exposing the Mormon Church’s extensive financial involvement in California’s Proposition 8 campaign that overturned the legalization of same-sex marriage in 2008.

After obtaining classified Mormon documents from an anonymous source, Karger has maintained his belief that the National Organization for Marriage was set up by the Church of Jesus Christ of Latter-day Saints (LDS) as a front group to funnel money for political campaigns against the legalization of same-sex marriage. Ever since, Karger has been tailing NOM’s every move – ready to file a complaint each time it funds a political campaign and fails to register or disclose its donors.

This year Karger started hounding NOM for its 990s a month before they were due. He told TAI that in late October he sent one of his campaign staffers to NOM’s D.C. headquarters on K Street, who came back empty-handed. He then mailed an accusatory letter to recently named NOM chairman John Eastman, which soured the staffer’s ability to collect the forms on a subsequent visit to NOM’s office on Nov. 16.

(TAI first visited NOM’s D.C. office looking for its 2010 990s in early November and was told by executive assistant Paul Bothwell that the forms were due to the IRS on Nov. 15 and would be published on NOM’s website. On Dec. 2, TAI returned to NOM’s office, and Bothwell promptly printed out the records. The forms indicate that NOM will not be making the records available online.)

Karger, who launched an ethics investigation against NOM in California and in Maine and closely tracks the group’s legal cases, told TAI that based on NOM’s legal activities alone, he suspects the organization’s budget is higher than what they are reporting.

Though Karger still believes that the Mormon Church is in league with NOM, Jacobs said he thinks it’s unlikely, due to all the attention and scrutiny the Mormon church faced after Proposition 8.

“I would be very surprised if the Mormon Church gives anymore,” Jacobs told TAI. “I think they’re done.”

(Earlier this year TAI was told by a documentary filmmaker covering Maine’s gay-marriage battle in 2009 – which NOM was involved in – that Mormon money had been promised but not delivered to the campaign trying to ban same-sex marriage.)

TAI contacted the United States Conference of Catholic Bishops and the LDS church – neither organization responded to requests for comment.

Over the years, NOM has received extensive funding from evangelical Christian organizations such as Focus on the Family and the Family Research Council, and NOM Exposed has linked NOM to the anti-gay-marriage grant-making groups the Lynde and Harry Bradley Foundation and the Arlington Group.

The group reported spending its money primarily on grants to anti-same-sex-marriage organizations ($345,733), including Stand for Marriage DC, the Proposition 8 Legal Defense Fund, and the Iowa Family Policy Center; fundraising ($153,693); and “other expenses” ($994,793).

No specific mention is made of the Ruth Institute in the NOM Education Fund’s disclosure to the IRS; though, as TAI noted above, NOM’s 501 (c) 4 reported Morse’s salary as an organizational expense.

The future of NOM

Earlier this year, in supporter emails, on its blog, and in advertisements, NOM appeared to be energized by a last-minute derailment of a bill to legalize same-sex marriage in Maryland. However, the passage of marriage equality in New York, the overturning of Don’t Ask, Don’t Tell, NOM President Brian Brown being laughed at for his arguments against gay marriage on a Fox show, and the revelation that NOM doctored and misrepresented images to inflate opposition to same-sex marriage in New Hampshire have resulted in more urgent messages from the NOM camp.

A fundraising email from Brown from early November begins:

We have won victory after victory for marriage. California. Maine. Maryland. Rhode Island. Gay marriage is inevitable? Apparently, voters across America missed that memo. *But NOM is fighting on so many fronts right now our resources are being spread thin. *[Emphasis NOM's.]

Then Brown accuses the “same-sex marriage lobbyists” of being supported by “massive contributions from the usual Hollywood celebrities, huge foundations and wealthy billionaires. What do we have? Millions of Americans just like you, friend.” [Emphasis NOM's.]

It’s essentially the same argument that the “same-sex marriage lobbyists” use against NOM. HRC, the country’s largest LGBT-rights lobby group, in fiscal year 2009 (PDF) reported $21.4 million in contributions and grants to its political arm. The organization reported 256 contributions above $5,000 – most of them below $20,000.

“There certainly are people opposed to the freedom to marry [for gay and lesbian couples], but they are not the people that support NOM.” Wolfson said. “NOM is supported by a small group of secret donors; we’ve seen no evidence o the contrary. And they are a threat. Not so much NOM, but the anti-gay founders behind NOM. Money still is power.”

Karger told TAI he wants the federal government to investigate NOM’s finances and political activities. Though the political activist himself could be subject to scrutiny, depending on who occupies the White House in 2012. This summer, GOP presidential candidates Michele Bachmann, Rick Perry, Mitt Romney and Rick Santorum signed NOM’s “Marriage Pledge,” which calls for the creation of a presidential commission to “investigate harassment of traditional marriage supporters.”