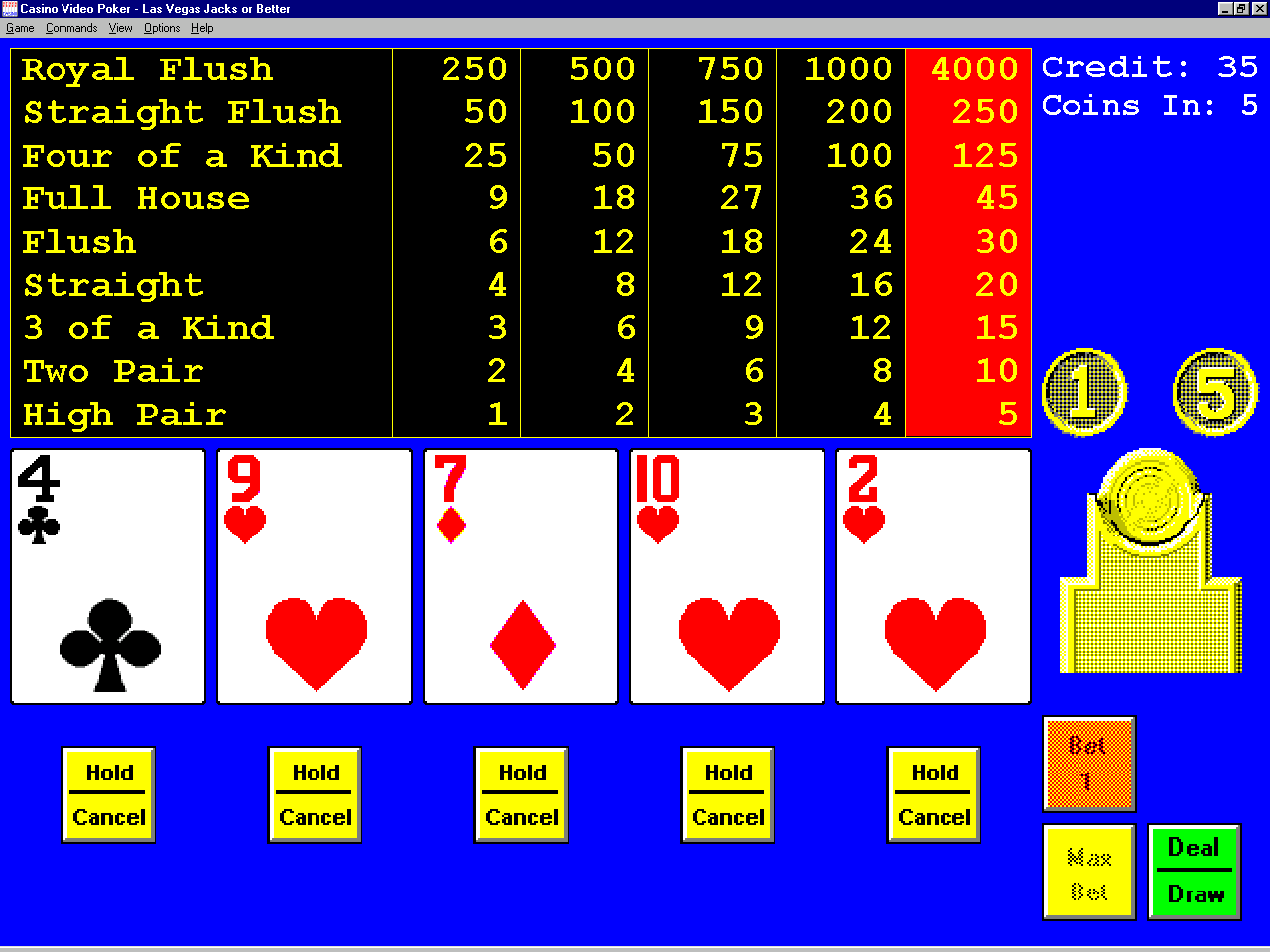 Video poker is a relatively basic version of the poker game that is modeled after the game of Five Card Draw. Various kinds of video poker games have developed throughout time.

The most famous and iconic video poker game is Jacks or Better. You are given five cards and have the option of discarding any number of them, replacing them with fresh ones.

After you've completed your draw, you'll be rewarded according to a predetermined paytable, which may vary across various Jacks or Better versions and definitely varies from other video poker games like Deuces Wild or Joker Poker.

Video poker has been around in some form or another since the 1970s when personal computers led to the development of games that catered to a wide range of prospective consumers' game-playing needs.

But, since then, Video Poker has become one of the most popular machines to play, and it is a major industry leader in Las Vegas. As if that weren't enough, video poker is popular because it has a low house edge (profit for the casinos) while still allowing you, the player, to win large (in jackpot proportions).

Even better, You may play video poker alone and without the psychological strain of a live poker game, giving you that much-desired anonymity.

In other words, you won't have to deal with pit bosses, dealers, or other players who will analyze and, at times, irritate your performance. In casinos, video poker machines are quite popular. They vary from slot machines (as we'll learn later), although they often coexist on the floor alongside them.

The principles and rankings of video poker are similar to those of conventional five-card draw poker, except instead of betting against other players, hands are awarded solely on their rank, with the less likely to occur hands receiving greater rewards.

The machine gives the gambler five cards when he or she places a bet. After that, the player may keep whatever number of these cards he or she wants and draw again.

Undealt cards are used to make the replacement cards (so there is no chance that the player can reacquire a previously discarded card). If the resultant hand is a winning hand, the payment is determined by the hand's quality and stake amount.

Video poker began as a single game, and today's Jacks or Better is the most similar to traditional poker machines. Over the years, several other variations of the game have been created and may now be found in casinos all over the globe. Here are a few examples:

This game is similar to Jacks or Better, with the exception that a pair of tens also pays out a victory.

Any deuce given to you in Deuces Wild is wild, meaning it replaces all other cards in the deck.

A single joker card is added to the regular deck of playing cards in Joker Poker. All other cards are replaced by the Joker. To win anything, you'll need at least two kings.

Bonus Poker is similar to Aces and Faces in that it pays out more if you get four of a kind on a certain hand. The RTP rate of the game is reduced by lower total rewards.

As you can see, video poker encompasses a wide variety of games. Don't be misled by the jokers and their unique rewards, however. All of these games payout less than Jacks or Better. Some casinos have been known to provide a variation of Deuces Wild that offers the player an edge over the house, but these games are very difficult to find.

When considering how to win at video poker, it's important to first comprehend how the game works. Like any other gambling game, video poker is all about odds and arithmetic.

Because the games are based on probability, the casinos know they will win in the long term. The casinos would be gambling if they weren't, and no one would know who would win in the end.

When approaching a video poker machine, the first thing you should do is consult the paytable. You'll want to play a game with a 9/6 paytable if you're playing Jacks or Better. This implies that a full house pays 9 coins and a flush pays 6 coins.

It's worth noting that certain Jacks or Better machines only pay out 8 coins for a complete house. Such devices should be avoided at all costs, as they will substantially increase your losses.

You'll want to start playing firsthand after you've learned the paytable. When you press the deal button, you'll be dealt five cards. You'll need to select which cards to retain and which to replace at this stage.

While other machines, such as Deuces Wild or Double Bonus Poker, may yield higher payouts, mastering them is more difficult, much as winning in Super High Roller events like the US Poker Open is more difficult than cashing in a $1,000-entry WSOP bracelet event.

However, there are additional methods to influence the action while playing the basic Jacks or Better version, one of which is to always play the maximum. This is ideal, since if you get a Royal Flush, the Jacks or Better machines will always payout the most, and winning jackpots more often is obviously a good thing.

If you do strike the Royal Flush, you'll want to take advantage of the bonus. If you wager 1-4 coins on a Royal Flush, you won't receive the extra payment, but if you bet all five coins, you will. Maintain the progressive nature of the game by playing at a level that qualifies you for the jackpot!

Players like experimenting and making snap choices, but this is the worst thing you can do. You may be tempted to attempt a new strategy and pursue some long shots while playing the game. However, if you want to get as near to optimum outcomes as possible, you should adhere to this video poker approach.

The fixed video poker odds never change, and making these optimum mathematical decisions will benefit you in the long term. Of course, you may always risk it all and abandon this video poker technique, but I strongly advise against it. If you don't, you'll have a decent chance of winning on a lot of evenings.

For poker players, progressive jackpot video poker machines provide the same adrenaline thrill as PKO tournaments. They're a lot of fun, and the rewards grow larger and bigger as you play.

Always be aware of the risks of this aspect, but if you play it well, your modest stake may turn into large wins.

Play the greatest paytables in Progressive Jackpot Video Poker and stick to the 9/6-or-better approach. Video poker is different from slots in that it includes a skill element. In a slot machine, you put your money in, and the result is determined solely by chance (more precisely, a Random Number Generator). There's nothing you can do to change the result of a slot machine!

You make decisions in video poker. This implies that you are in charge of the result. You may reduce the percentage that the casino takes if you make the right decisions.

On the other hand, if you make bad decisions, such as tossing away and redrawing a strong hand, you will lose money far more quickly! Jacks or Better video poker with a 9/6 payout table has an anticipated payoff of 99.543904 percent when played optimally.

For any casino game, these are some of the greatest odds you'll discover. When played correctly, Jacks or Better video poker has a 99.54 percent anticipated payoff.

The important thing to remember is that this return is for optimum play. Some of the odds and strategies connected with video poker are not apparent, and may even be counterintuitive, as we'll see below.

Because players don't play the optimal method (or place the maximum stake), the casino earns a higher profit on video poker than the theoretical return.

Another difference between video poker and slots is that the payoff table is visible to the player in its entirety. You can calculate the precise anticipated return from a video poker machine by using the proper analysis and payout table.

For a slot, this is not the case. A payout table is displayed on the side of a slot machine, but you have no clue what the relative probability of occurrence of any of these combinations is.

You now have a fundamental understanding of how to win at video poker. Knowing which cards to retain isn't the only thing you'll need.

There are a few more things to keep an eye out for if you want to get the most out of your video poker games. These may add up over time and enhance your odds. Some of these rules may also apply to other types of gaming. Even if you don't really like video poker, you should keep these ideas in mind for the next time you play video slots, blackjack, or whatever game you choose.

Use Bonuses And Promotions

Whether you're playing in a live or online casino, taking advantage of the bonuses and promotions available will give you a far greater chance of winning.

Video poker, as I previously said, is a game with a very low house edge. Consider what a little more income might do for you.

While many promotions exclude video poker players, live casinos often do not discriminate with their incentives. With playtime coupons and other similar promos, you may be able to get some great deals.

Any gambling game needs you to have a sufficient bankroll to cover the stakes you want to play. Video poker has a modest house edge, but it does have a lot of volatility. If you don't want your session to be cut short owing to poor luck, have at least a few hundred bets on hand.

Prove Your Luck With The Progressive Bonus Machines

Look For The Most Effective Machines

Some video poker games, as I've previously stated, provide a payoff of above 100% when played optimally, but they are uncommon. If you can locate a game with full pay, such as Deuces Wild, play it and master the particular video poker technique that will allow you to get that reward.

Be A Member Of The Vip Club

Most live casinos have a loyalty scheme in place that allows you to earn points while you play. If you can pay for high payout machines and earn points on them, you will notice a substantial improvement in your overall performance as well as an increase in your bankroll.

Play At Your Own Speed

There's no need to hurry anything. Make sure you don't play too quickly and overlook stuff while you're learning the best approach. You want to be able to play quicker in the future by having the strategy down to a science.

Low-paying Machines Should Be Avoided

Video poker machines with a lower payoff percentage are also available. A Jacks or Better machine, for example, that pays 8 coins for a complete house, is not a decent machine, and you should avoid it.

Keep all of these suggestions in mind the next time you play video poker, and you'll notice a substantial improvement in your chances. Remember that practice makes perfect, so don't hurry into anything and do things at your own speed.