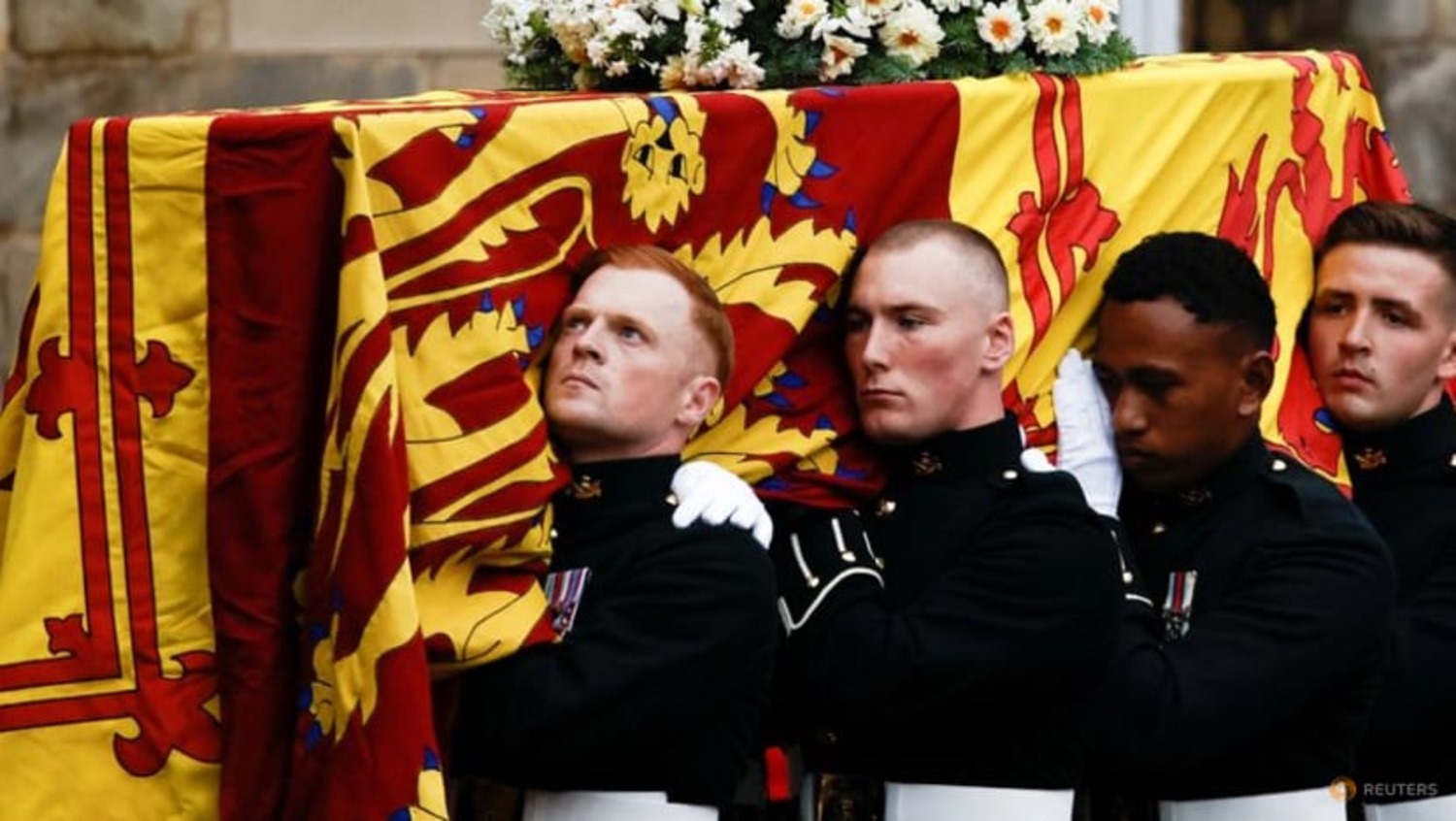 Round-the-clock vigil to give mourners a chance to bid Queen Elizabeth farewell from Wednesday evening (Sep 14) until early on the day of her funeral.

Before her state funeral on September 19, which will be attended by world leaders, hundreds of thousands of people are expected to pay their respects to Queen Elizabeth II.

The Department for Digital, Culture, Media, and Sport said that people could walk by the coffin 24 hours a day from 5 p.m. local time on Wednesday, September 14, until 6.30 a.m. on Friday, September 19.

"Those wishing to attend will be required to queue for many hours, possibly overnight," the British culture ministry said.

"Large crowds are expected and people are encouraged to check ahead, plan accordingly and be prepared for long wait times," it said on Monday.

Westminster Hall, the oldest building in Britain's parliament, will have security checks like at an airport. There will be strict rules, and only small bags will be allowed.

The coffin of Queen Elizabeth arrived in Edinburgh on Sunday, September 11, after a six-hour trip from her summer home in the Scottish Highlands. Along the way, tens of thousands of mourners lined the route, many of them standing still and silent while others applauded or shed tears.

At the end of its slow journey through the beautiful countryside, villages, small towns, and cities of Scotland, soldiers in kilts carried the coffin to the throne room of Elizabeth's official Scottish residence, the Palace of Holyroodhouse, where it will stay overnight.

King Charles, the queen's oldest son and the new monarch, paid an emotional tribute to his mother on Friday. He said she had started her "last great journey" to join Prince Philip, her husband of 73 years who died last year.

Earlier, the hearse carrying her oak coffin left the gates of Balmoral Castle, where she died on Thursday at the age of 96, to start the drive to Edinburgh, which is the capital of Scotland.

On top of her coffin was a wreath made of flowers from the Balmoral estate, including sweet peas, which were one of Elizabeth's favorite flowers.

People gathered in the center of Edinburgh to greet the cortege as it went to Holyroodhouse, where a military guard of honor was waiting.

As soldiers from the Royal Regiment of Scotland carried the coffin inside, the queen's daughter Anne curtsied between her younger brothers, Princes Andrew and Edward.

"There was no way I could miss this. I would regret it for the rest of my life," said Eilidh Mackintosh, 62, who left her home at 6am to get a good spot among the crowds on Edinburgh's famous Royal Mile.

Rachel Lindsay, who is 24 years old, started crying as the coffin went by. She said,

It’s just very sad. I don’t think we expected it to ever happen. I just thought she’d live forever. I didn’t think it was real until I saw it.

The trip from Balmoral was the first of a number of things that happened before the state funeral on September 19 at Westminster Abbey in London.

Her death has caused tears, sadness, and warm tributes from the queen's close family and many people in Britain, as well as from people all over the world, which shows how long she was a part of the world stage.

People lined the road or stopped their cars to get out and watch wherever the cortege went. At one point, it went past a guard of honor made up of dozens of tractors lined up by farmers in fields next to each other.

Many people stood still and watched in the bright sun. Some people tossed flowers into the street. Others were moved to tears by how they felt at the time.

Elizabeth Alexander, 69, who was born on the day the queen was crowned in 1953, said

It's just very, very sad. I’m happy I was here to say our goodbyes

Messages of sympathy from other people have been tied to trees.

Today, September 12, the carefully planned ways to show grief will continue. Charles will join the other senior royals in Edinburgh, where the coffin will be carried in a procession from Holyroodhouse to St. Giles Cathedral for a service.

There, it will stay for 24 hours so that people can say their last goodbyes. The new king and other members of the royal family will also hold a vigil.

Officials in Britain have said that the day of the queen's funeral will be a public holiday. US Vice President Joe Biden said he would be there, but we don't yet know everything about the event or who will be there.

Before that, her coffin will be flown to London, where it will be moved from Buckingham Palace to Westminster Hall with a solemn procession. There, it will be on display for four days.

A spokesman for Prime Minister Liz Truss told reporters, "It goes without saying that we can expect large numbers of people."

On Wednesday, the queen's coffin will be carried from Buckingham Palace to Westminster Hall in a formal procession through the center of London.

Queen Elizabeth died on September 8 at Balmoral Castle in the Scottish Highlands, and on Sunday, her body was taken to Edinburgh. On Tuesday, it will be flown to London. The lying-in-state will be held on Wednesday until early on the day of her funeral for mourners to have a chance to bid goodbye and honor the Queen for the last time.