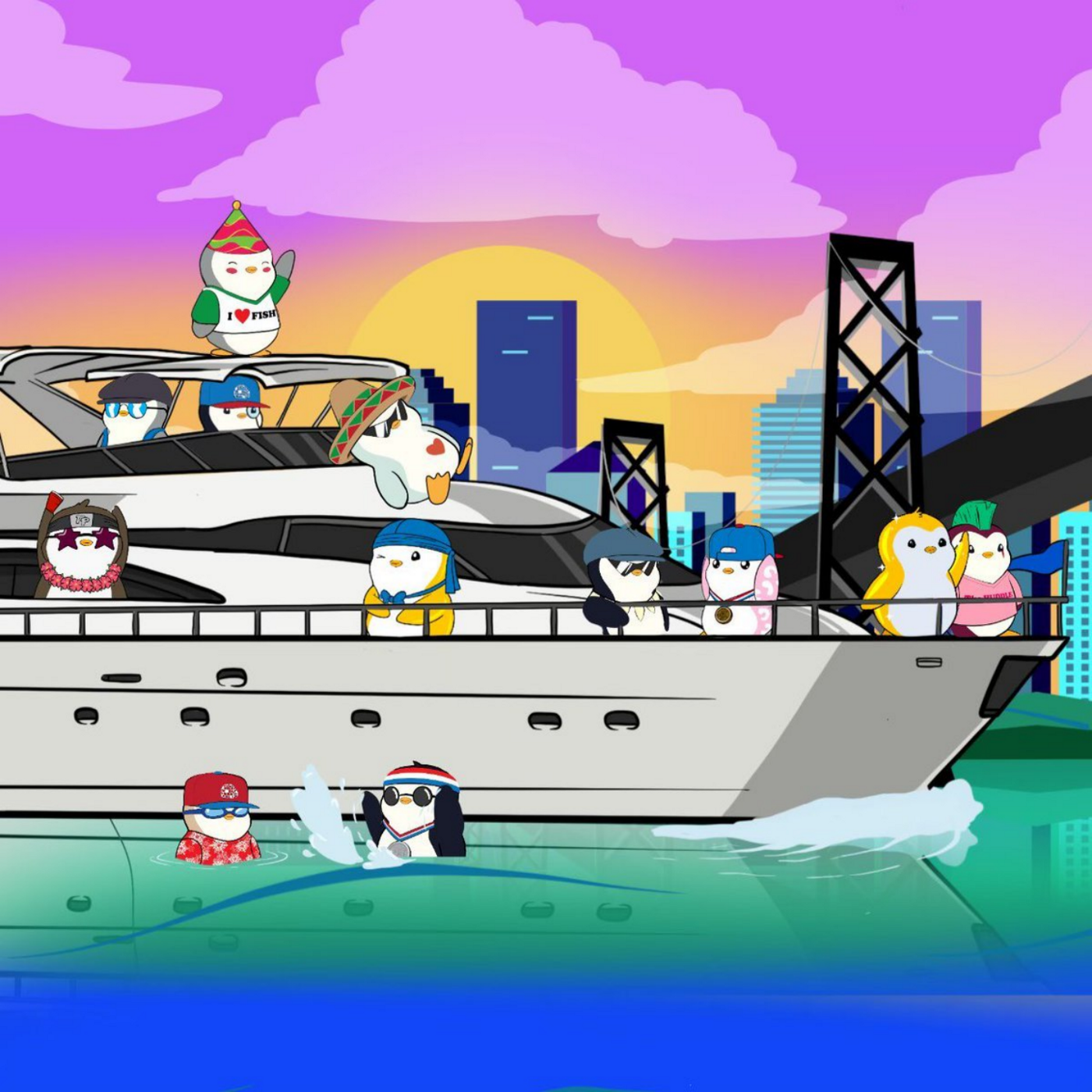 NFT owners welcomed the news as Pudgy Penguins NFT Prices surge after creator unveils IRL toys. As a result, the platform experienced a drastic increase in prices and sales. This platform has truly turned around under its new leadership as the situation was quite shaky a while ago. New vision and leadership got the things rolling and now Pudgy Penguins is in its revival stage.

Surge In Prices And What It Means For Pudgy Penguins?

Pudgy Penguins has seen its fair share of ups and downs. Recently, NFTs associated with this platform has witnessed a huge surge in prices after IRL toys were unveiled. This is very important news in this domain and for people who are passionate about NFTs.

In this regard, the project's floor is rising and sales are surging as a result of the physical “toyization” of some penguins from the long-standing collection.

Following the project's announcement that it would be granting licenses for some non-fungible tokens to be turned into physical collectible toys, Pudgy Penguin non-fungible token (NFT) sales accelerated on Thursday.

According to information from NFT Floor Price, the collection's floor price, which is the cost of the least expensive edition, is currently 2.63 ETH (about $4,900), up 18% from yesterday's floor and 60% from three months ago.

Since its debut in June 2021, the Pudgy Penguins brand has experienced its fair share of ups and downs; last January, it fired its founders. A Los Angeles-based businessman who owned the Pudgy Penguin brand purchased it in April for 750 ETH, reviving community efforts to take control of the collection's destiny.

The announcement coincides with an ongoing discussion concerning holders' licensing rights in the NFT community, which was emphasized by Moonbirds' recent move to a CC0 license and subsequent collapse of its floor price.

In contrast to Pudgy Penguin NFT licenses and collections like the Bored Ape Yacht Club and CryptoPunks, a CC0 license allows anybody, not only the NFT holder, to use the creative rights associated with the project's artwork to generate commercial items.

The art was a big draw! Pudgy Penguins' artwork is incredibly adorable and simple to like. Who doesn't adore a cute penguin, sometimes known as a "Pengu," decked out in amusing costumes and accessories like beanies and scarves for the winter? Even uncommon 1/1 penguins with hand-selected features that were not generated existed in small numbers.

The idea received support from many powerful NFT accounts, who promoted it on Twitter. Even Steph Curry of the Golden State Warriors bought one and for a while proudly wore it as his PFP. Before starting Pudgy Penguins, the team members were all involved in other successful communities and were all engaged in the NFT sector.

After the long-awaited 750 ETH ($2.5 million) sale was completed, the Pudgy Penguins non-fungible token (NFT) project has a new leader. According to those involved in the transaction, a consortium led by Pudgy Penguins owner and businessman Luca Netz from Los Angeles would acquire management of the project from the original four co-founders as well as royalties.

Together with his associate Cameron Moulène and several other participants, Netz will take the helm of "The Huddle" as its new head. The buyers' group will have control over the project, which will give them the authority to create a token, carry out airdrops to other NFT series holders, and exercise other rights.

The agreement was reached after the Pudgy Penguins community controversially chose to replace their original team in January. Owners of the adorable flightless digital birds have been waiting for information on the project's hazy future ever since.

The last time Netz spoke with CoinDesk was in January when a preliminary agreement was reached between Netz and the previous founding team. "This process [has] taken considerably longer than I imagined," Netz remarked.

The Pudgy Penguins, which were introduced in July, have grown to be one of the most well-liked NFT collections, with over 49,000 ether in trade volume (equivalent to $171 million at the current price of ether) on the NFT marketplace OpenSea.

He claims that the digital penguins, who are accessorized with everything from bowties to wizard hats, "emit joy," which is why he was captivated by the collection. Last summer, Netz spent around 0.1 ETH on his first penguin. When considering an NFT project, it's "a fascinating emotion to feel," according to Netz.

Resurrection may be more difficult said than done given the daily release of new NFT collections. Since January, the market has been seeing a sharp downturn.

According to DappRadar, trade volume on OpenSea, the largest NFT marketplace in the world, has decreased by 67 percent over the last 30 days. According to tracker Nansen, one in three NFT collections has effectively run its course and seen little to no trading activity.

The mission of the new team appears to be inspired by Yuga Labs and its prosperous Bored Ape Yacht Club NFT community.

Yuga has held real-world gatherings, has agreements for more branding collaborations, and has a deal for a BAYC-related game with Animoca Brands.

With a $3 billion market value and an accompanying ApeCoin, Yuga has just raised $450 million in a fundraising round led by Andreessen Horowitz.

According to DappRadar, the floor price for Pudgy Penguins is less than $8,000, which is significantly less than the $360,000 floor price for a Bored Ape. But the neighborhood hopes things will alter. Yuga is a source of inspiration for us without a doubt, according to Netz. Netz, who listed his age as 23, claims to be the owner of 14 penguins.

A raffle for 100 penguin owners to attend a yacht party on May 7 in Miami is already being planned by the project's newly formed and growing team of 20, according to Netz.

I want to have fun and make a space where people can laugh and dance, said Netz. The penguins' 21,100-member-strong Discord community is now humming with hope where cursing and despair formerly reigned.

The story of Pudgy Penguins will always serve as a lesson for NFT practitioners. It demonstrates to project creators that, even with a successful launch and a robust community, the GOAT position in the industry is not a given. In this situation, having unwavering honesty always is crucial.

Because hype may quickly turn against you, building a project for the long run requires much more than merely riding the wave of the moment. It also demonstrates the strain founders and communities are under to deliver ever-larger roadmaps in a shorter amount of time.

It is unhealthy to place these expectations on the NFT market while it is still expanding rapidly because this is not something we anticipate in the traditional content industry. A stain has been cast on what was otherwise a promising community because of so much faith and money being given to a team of founders who were not up to the task.

How Much Does A Pudgy Penguin Cost?

What Is A Pudgy Penguin?

On the Ethereum network, Pudgy Penguins are "non-fungible tokens," and each Pudgy Penguin was designed to optimize the vibe.

How Much Has Pudgy Penguins Made?

Developers created the first batch of Pudgy Penguin NFTs, 8,888 pictures after Mingo transferred the features to them. A sizable payout of $23,000 in dollars and $37,000 in ether was provided for the finished product.

NFTs holds a bright future and Pudgy Penguins is a prime example. After a major setback, the platform is witnessing a surge in prices which is very happy news for people associated with it. However, the situation was not like this if we go back a quarter.

Disclaimer: We do not promote or support piracy in any capacity. Piracy is considered wrongdoing and is viewed as genuine offense under the Copyright Act of 1957. This page plans to inform the overall population about the robbery and urge them to be protected from such demonstrations. We also ask that you not be energized or participate in theft in any structure. We encourage you to avoid illicit content or pirated content and shield yourself from spam. Stay safe!