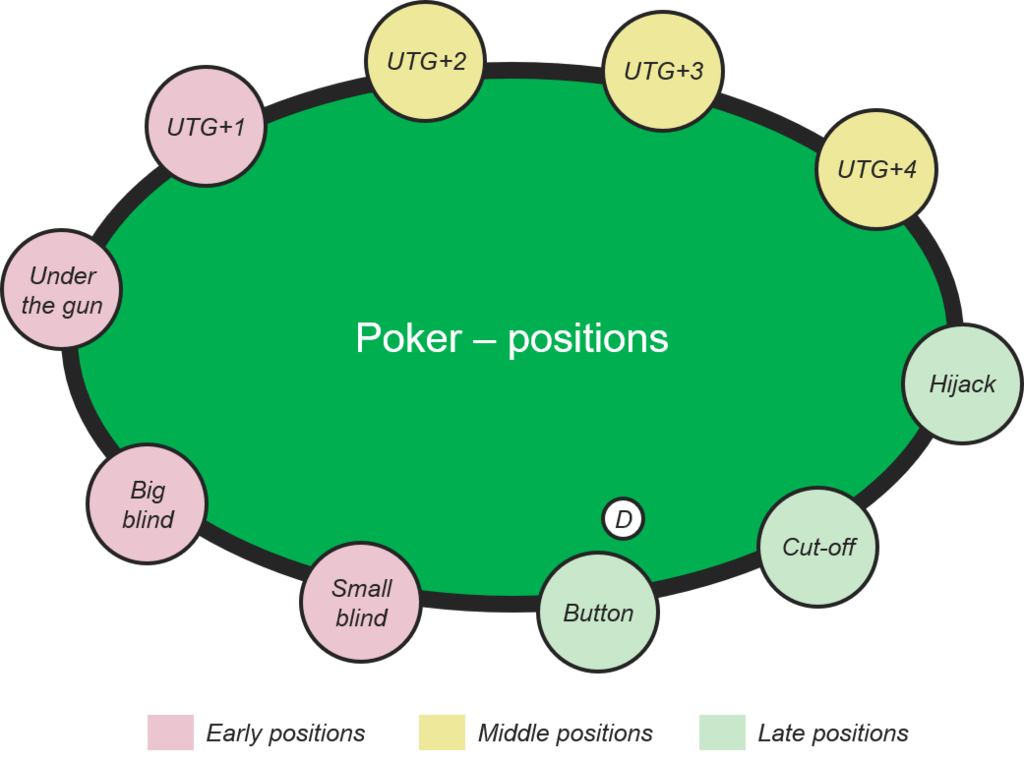 It is very advantageous in a game of imperfect information to know what your opponent's choice will be before making your own option.

It is true that the more information you have, the higher quality choices you will be able to make with your poker hand, and this is particularly true in games like Texas hold ‘em.

When it comes to choosing your poker strategy, your table position is very important. 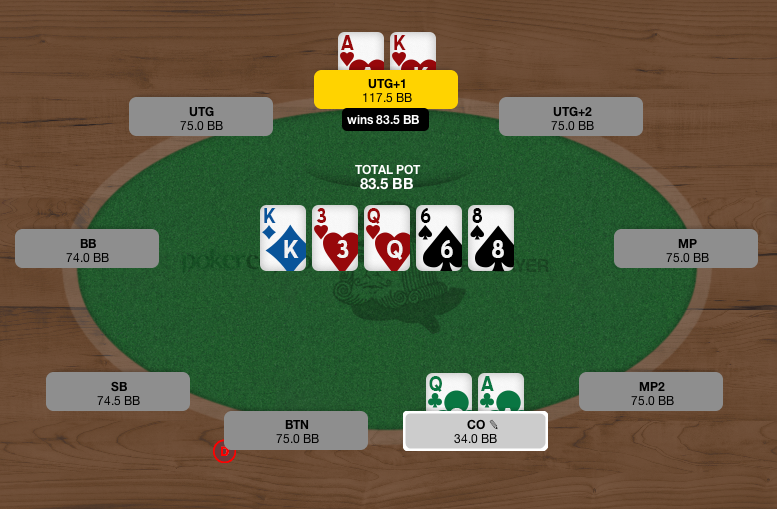 Positions Are King In Poker

The position is one of the most important concepts in poker and is something that a lot of new players get completely wrong.

To put it simply:

Position in poker refers to the order in which players are allowed to act. A player who acts first is "out of position", while a player who acts last is "in position". Playing in position gives a distinct advantage due to the extra information gained and the ability to more effectively control the size of the pot.

There are two scenarios to discuss regarding the position: pre-flop and post-flop.

During the preflop round of betting, you can either play from an early, middle, or late position or from the blinds with further breakdowns depending on your exact seat (which we will get into in a moment).

The important thing to remember is that these two aspects are related. When you play from an early position preflop, you are more likely to have to play out of position post-flop. Whereas if you play a hand from a late position, you are fairly likely (or in some cases, guaranteed) to be playing in position for the rest of the hand.

The fact that your starting seat determines whether you are more or less likely to be playing in position post-flop is a very important factor that drives our opening strategy quite significantly.

Let’s dig deeper into this and find out what the positions are on the table and why the understanding position is so important to playing winning poker.

The main advantage of a player in a late position is that he will have more information with which to make better choices than players in an early position, who will have to act first and will not have this additional knowledge.

Because of this positional advantage, several players in heads-up play have raised the button with an unusually broad variety of hands. Also, as the number of opponents decreases, the likelihood of a hand being the best increases.

Because a player is compelled to contribute to the pot and must act first on all betting rounds following the flip, the blinds are the least desired position. Although the large blind has a significant advantage in the initial round of betting, it is the position that loses the most money on average.

The Starting Positions In Poker

Each seat at the table is assigned a unique name, which enables poker players to quickly identify the hands they should be playing (more on that later) and how they should anticipate their opponents playing in response to their actions.

Each of these seats is classified into one of four categories:

Depending on how many players are seated at your table, the names of the positions vary somewhat. Let's start with full-ring (9-handed), which is the most frequent casino configuration.

The picture below depicts the four categories we discussed before, as well as a more detailed breakdown with the names of each seat. If you are unfamiliar with the acronyms, here is a brief explanation of what they mean:

UTG stands for "under the gun."

MP: Middle of the road.

SB is an abbreviation for small blind.

BB stands for the big blind.

For example, the first seat at a poker table is under pressure to make the opening choice of the newly given hand, and this is analogous to that situation. On a full ring table with a total of nine players, eight players are waiting to act following the flop.

As a result, if you opt to play your hand, there is a good chance that another person at the table may wake up with a better hand. If someone is given a poor hand and chooses to play, you will be forced to play out of position on the post-flop unless they happen to be in the big blinds.

As a result, you must choose the hands you want to play with care and consideration. Consider the following scenario: we want to open 66 from the UTG terminal. Some may consider this to be a pretty typical opening.

However, consider the possibility that any one of these players holds a strong or premium hand consisting of 77 or higher, AJs or higher, KQs, AQo+ or KQo. This range accounts for 7.5 percent of all hands, and the likelihood that a player will have one of these hands is shown in the table below:

Consequently, there is an over 50 percent probability that someone has a hand that is at the very least flipping with 66 and, in many instances, is dominant.

Pocket 66s only have a 37 percent probability of winning if you go all-in against that range. However, you will realize a far smaller portion of that equity owing to the possibility of receiving a high card in your pair, which will make it extremely tough to play the hand.

Equity realization is a complex concept that I will not go into depth about here. However, PokerNerve has a fantastic essay on the subject that you can read by visiting this link. As a result, the most important takeaway is:

When there are a large number of players who have yet to act preflop, you must have a very powerful hand to even contemplate joining the pot. The next player to act is referred to as "under the gun plus one," or UTG+1, as the clockwise rotation of the table progresses.

Because this position plays extremely similarly to the UTG, these two positions are grouped in early position poker strategy. Because only seven players are remaining to act when you open from UTG+1, you have the opportunity to play a few more hands.

These pictures were created using a piece of software called Equilab, which you can get for free by visiting this link.

Save your ranges for later use, convert percentage openings into real hand ranges, and calculate your equity about another hand or range are all possible features of this program.

The middle position is the next job category. From here, you should continue to play cautiously, but since two players have already folded, you can open a few more combinations of cards than you could in UTG. That you will be confronted with a powerful opponent. You'll be forced to play out of position after the flip.

MP+1 should be played in the same way as MP, with the exception that the beginning hand requirements are somewhat less stringent. As an example, the normal opening range for MP will be about 12 percent, and for MP +1 it will be around 16 percent.

The last position, which symbolizes the three seats of hijack, cutoff, and button, is the next MP. We give each of these positions its own name since they play so differently that there is a significant variation in strategy required.

Although this may seem to be a lot to memorize at first, after you get some experience, you will have no trouble remembering all of the various seat names and acronyms.

It has become totally automatic for me, and I no longer have to think about it. With a 19 percent opening range, Hijack will play more hands than MP, but it won't be until the cutoff and the button that we truly start to expand our range.

In the cutoff, for example, we'd want to open about 26% of hands, while on the button (OTB), we'd like to open closer to 45 percent of hands if we're up against appropriate players in the blinds.

HOW TO PLAY IN LATE POSITION | Poker Tutorial | partypoker

The blinds are another kettle of fish altogether. To begin, players in the blind must pay a tiny "fee" before seeing their cards, implying that they are blindly throwing money into the pot, thus the name.

Second, when you play from the blinds, you'll mainly be responding to other players' raises rather than initiating them.

This requires you to change your approach from what we've been doing so far-you'll have to start calling considerably more often, especially from the big blind.

The worst seat on the table is the Small Blind (since you will always act out of position and with the least amount of knowledge), and the Large Blind is the least lucrative because you must throw a whole big blind into the pot without even seeing your cards.

The large blind has two redeeming qualities: we already have 1 BB in the pot, thus, despite our positional disadvantage against all other seats save the SB, we will typically be able to "close the action" by calling and seeing the flip.

Closing the action ensures that part of our equity will be realized (potentially allowing us to hit a piece of the flop). The same can not be true for the SB, where if we call for a raise, the Big Blind may reraise us with a squeeze, putting us in a difficult situation.