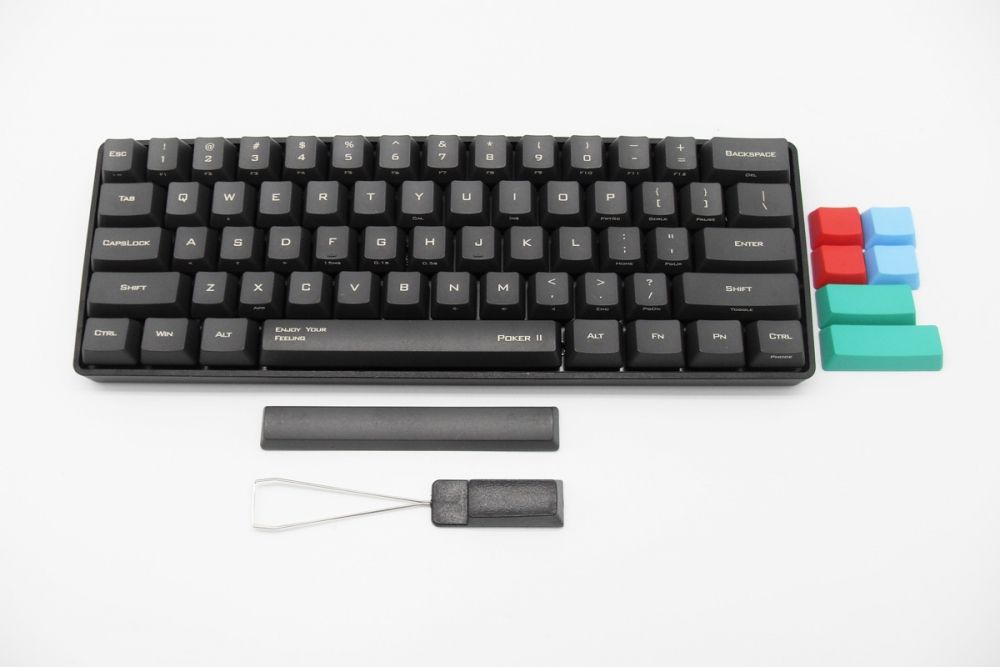 The Poker keyboard features a 60 percent layout rather than a tenkeyless or full-sized layout, which is similar in design. You may choose between a white or black keyboard, which includes white or black keycaps, and an aluminum casing (although for the black option, the keys are actually closer to a dark grey).

Vortex made a fantastic decision by using aluminum for the casing. Aluminum casings cost over $50 for a used one and over $90 for a new one, according to individuals who are acquainted with the keyboard modding community. As a result, Vortex adding an aluminum low-profile casing as standard is a fantastic addition that raises the keyboard's value considerably.

However, you may not be able to obtain RGB replacement modifier keys depending on the branding or color scheme.

In contrast to the usual ABS keycaps that come out of the box, Vortex utilizes high-quality and rather thick PBT keycaps. PBT is known as an 'everlasting' key because the plastic is very tough to smooth out. If you've ever had a keyboard where one of the keycaps became glossy and smooth, you'll notice that it takes a lot longer with these. They also have a better sound to them, sounding more like a 'thock' than a click, so it's another great addition from Vortex. It's also worth pointing out that the whole keyboard seems to be in ANSI format. 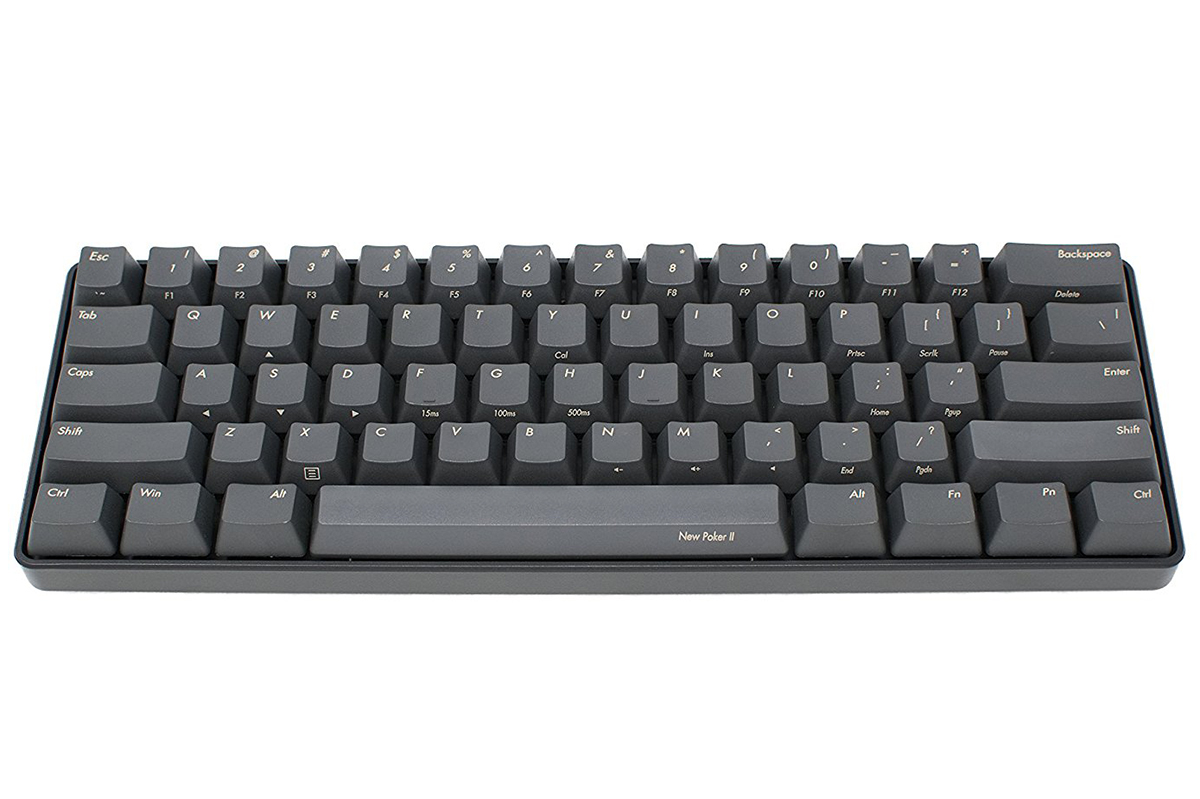 Comforts And Ergonomics Of Poker Keyboard

The smaller the keyboard, the more ergonomic and comfortable it is. And this is true for a variety of reasons, the most common of which is the distance your hand must travel around the keyboard to reach the key you want to press. If you're right-handed, this has an effect on the distance your hand must travel to reach the mouse. The poker keyboard has a distance of only 12 to 13cm, whereas a full-sized 104-key keyboard has a distance of 30 or even 40cm. As a result, the poker keyboard has been one of the most comfortable keyboards I've ever used, and even after 13 or 14 hours of coding, my wrists feel relaxed and rejuvenated, especially when compared to a 104-key keyboard.

How to program the Pok3r Keyboard

Vortex is a well-known name in the mechanical keyboard industry, and their initial Poker and Poker 2 models were very successful. The fact that the keyboards are 60% keyboards, which means they lack a Numpad, arrow, or home cluster, as well as the function row, makes them stand out. Instead, the modifier keys FN and PN are used to access these buttons.

The keyboard has Cherry MX Clear, Red, Brown, Blue, or Black switches, which provides a fair amount of diversity, particularly with the addition of the ever-popular Cherry MX Clears. Cherry MX Browns (45cN) are my personal favorite since they are the most comfortable to write on.

The PN key does not serve as a temporary layer changeover key for the programmable layer, as it did in earlier versions of Vortex's 60 percent keyboards. This is because the number of programmable layers has been increased from one to three, and the PN key has been expanded for the backlight setting.

The firmware does not contain media control keys in earlier versions. To fix this, you should update the firmware.

The four DIP switches on the rear of the keyboard enable users to rapidly switch between various keyboard configurations, such as activating or disabling a DVORAK, COLEMAN, or QWERTY layout (first two DIP switches). The third switch converts your Caps Lock key to an FN key (something I found extremely handy-makes typing significantly easier). The fourth and final option lets you change the FN and PN keys to any position on the keyboard, with the exception of one or two (after some Googling, I discovered the one spot you can't swap them to is the right CTRL key).

The POK3R is made of very high-quality materials. Starting with the aluminum casing and progressing to the PBT keycaps, you'll have a high-quality keyboard that won't shatter, bend, or get glossy. It's the most durable keyboard I've ever used straight out of the box.

It's worth noting that the keyboard is also available in an RGB illuminated version if that's your thing. However, the illuminated version is likely to have transparent ABS keycaps that are painted and laser-etched, so they won't be as good as the thick PBT keycaps I got.

The programming capabilities of the POK3R are maybe its most notable feature. You may now change between four separate programming levels on the keyboard, and all of the unique keys are stored directly on the keyboard's hardware rather than needing additional software to program them. The final four keys before reaching the left Shift modifier) are the keys to moving between levels, with a limit of 32 keystrokes per key. After switching into a layer, LEDs under the spacebar will indicate which one you're in.

Key combinations are used to program the keyboard's microcontroller, which is permanently saved. For the Pok3r, no programming software is needed or available. A Pok3r's configuration can not be saved or restored.

KBC Poker, often known as KBC 60% or Poker X KBC, is a KBC 60% keyboard. This was the first keyboard in the Poker series, and it was a basic model that pioneered the compact size and simple construction that resulted in a lightweight keyboard.

The keyboard's height is controlled by the casing, as is the case with many small keyboards. The keyboard's base has four patterned rubber strips that assist it to stay put on the surface.

Because there is no plate or top to the keyboard, it may be simply dismantled by unscrewing a few screws. Cherry stabilizers are used by the bigger modifiers. A mini-USB connection is used on the detachable cord. The connection is located on the back of the device, but it is inverted.

The keyboard has two "lock modes": one transforms the right modifier block into an inverted-T arrow cluster, while the other transforms the () key into Esc. The base additionally exposes four DIP switches that may be used to change keys.

Outside the keycaps, there isn't enough room for indication LEDs. Light bleed from beneath keycaps is utilized instead, with LEDs running up from the PCB via holes in the mounting plate. Windowed keycaps would be an option, but this was not chosen.

KBC supplied a nylon USB-C to USB-A cable and a plastic USB-C to USB-C cable with the Poker II, both of which are OTG. They worked perfectly with all of my devices, including my Nexus 6P, which enabled me to utilize the keyboard. The keyboard includes diodes and a 6-key USB rollover.

Two hardware layers are included on the keyboard:

There are also two lock modes to choose from:

On the back of the card, there are four DIP switches: