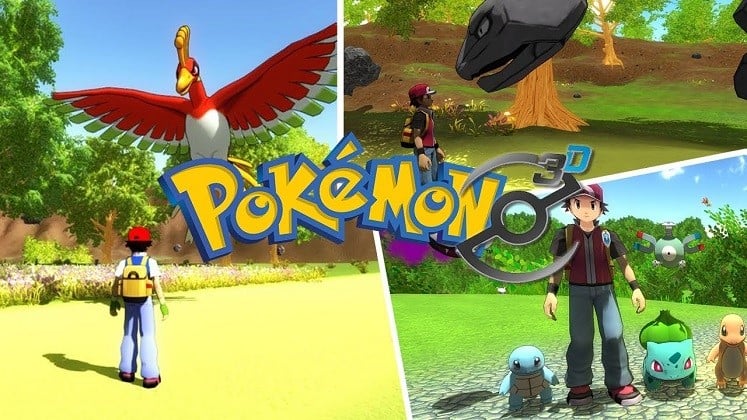 It was always going to be a Pokemon Fan Game. This franchise is one of the most well-known media assets on the planet. Multiple game series, movies, mangas, a trading card game and a highly important anime that has been running for well over 20 years are among the portfolio's highlights.

Few items in popular culture have had as much influence as Pokemon. And when you have something this large and varied, with millions of followers all around the globe, you should expect to see a lot of fan material inspired by it. You could look some of this stuff up on Google and spend days researching it without even touching the surface.

Emulators can play ROMs (read-only memory) files, which are computer images of games (like a Game Boy cartridge). On your PC or mobile device, you may run an emulator. An emulator is a must-have for every serious player who loves both vintage and current AAA-rated titles. For any system imaginable, there are a plethora of emulators to choose from.

Pokemon Zeta/Omicron, TheSuzerian's first Pokemon fangame, is what happens when creators take the normal Pokemon experience and fill it with everything fans have ever desired from a Pokemon game. All Pokemon from Generations I through V, as well as a handful from Generation VI, are catchable. Not only that but there are a few new Pokemon as well as new Mega Evolutions. But hold on There's more.

The Delta Pokemon, which are type and design variations on existing Pokemon, implement regional varieties years before Game Freak conceived of these unusual type combinations, are the game's most innovative feature.

It's not unusual for Pokemon enthusiasts to want to follow Ash Ketchum's travels throughout the Pokemon world. Pokemon Fire Ash satisfies that need. Players may travel across all seven regions, from Kanto to Alola, following Ash's adventures and battling his friends and enemies.

All of Ash's Pokemon are accessible as gift Pokemon in the same places where Ash caught them for gamers who wish to utilize them. However, if you choose to go off the beaten path, you may capture any other Pokemon. Pokemon Fire Ash is a fantastic journey down memory lane for any long-time Pokemon fan, even if you don't want to follow Ash's exploits.

Pokemon Reborn is probably the best choice for those seeking a Pokemon game with just the perfect amount of difficulty. This game is tough yet fair, and it isn't afraid to throw a challenge at the player and make them prepare ahead.

Domestic terrorism and other, more sensitive topics are addressed and highlighted many times in the narrative, making it one of the darkest on the market. The environment is gloomy and harsh, but the narrative is compelling enough to keep players engaged as they conquer the area, which contains the bulk of non-Legendary Pokemon from Generations I through VII.

The game Pokemon Showdown isn't your typical Pokemon game. Players do not choose their starting lineup and then travel throughout an area. Instead, Showdown is the most popular combat simulation program used by the Pokemon community to create competitively viable Pokemon.

Players may build their own competitive Pokemon squad by using Showdown's capabilities. Everything from items to abilities, EVs, and IVs may be customized. Players may take their teams online once they've formed them and watch how they do in several competitive categories until they're ready to enter the main series games.

Pokemon Insurgence, TheSuzerain's second Pokemon fangame, is the finest of the best when it comes to high-quality Pokemon fangames. Every feature of Insurgence may be customized. Players may adjust the level, choose particular challenge runs (such as Nuzlockes), or even choose between a light and dark narrative. The game also has a good dose of difficulty.

Because the game's many Gyms are themed rather than type-based, players will have to depend on more than one or two Pokemon for each fight. Two explorable areas are included, as well as every Pokemon from Generations I to VI, as well as additional new Mega Evolutions and Delta Pokemon from Pokemon Zeta/Omicron. Pokemon Insurgence is the ultimate Pokemon fangame experience, with a crew that is still semi-actively working on updates and bug fixes.

Every fan has a favorite generation of Pokémon. There are lots of options, ranging from the original 151 to the current-staggering gen's 493. Pokémon Light Platinum brings together Pokémon from different generations.

The game provides users with a conventional gaming experience while also enabling them to interact with Pokémon they may not have seen in an official capacity. The gameplay is recognizable since it is based on Pokémon Ruby. This game, like many ROM hacks, has a devoted following of players who return year after year.

In most Pokémon games, the trainer does not get a lot of screen time. A parent, a friend, and a competitor are typically the only characters the player encounters. The trainer becomes the center of attention in Pokémon Godra. The user may choose from a number of different professions for their trainer.

The gaming map is also divided into two areas, each of which provides a unique experience. This is one of the most enjoyable fan games since it enables players to go on a journey that allows their trainer to develop with their Pokémon.

The difficulty of the Pokémon games is usually balanced. The games start off easy and become harder as the player advances, forcing them to level up their squad. Dark Rising, on the other hand, immerses you in the action with some of the most difficult fights ever seen in a Pokémon game.

Because there isn't much time to get accustomed to the mechanics, Dark Rising is best suited to players who are already familiar with the franchise's gameplay. Players are always kept on their toes in this unique, extremely tough entry, from gym leaders to unexpected encounters.

When popular Nintendo games started making the transition to 3D, many fans expected Pokémon to follow suit. While this would be fulfilled years later in the creation of Pokémon Legends: Arceus, in the meanwhile, enthusiasts took it upon themselves to create a true 3D Pokémon experience. Pokémon 3D is a full-fledged 3D recreation of the original Pokémon Gold and Silver games. To bring the popular characters into the third dimension, the game employs all-new sprites.

While 3D Pokémon games were available on the Nintendo 64, they were not the typical Pokémon experience that fans had hoped for. Even if there are now official equivalents, this game is precisely what fans desired and is still adored by many.

Gaming urban legends have existed for as long as the gaming industry has existed; from Luigi being in Mario 64 to an NSFW code for Lara Croft: Tomb Raider, these stories have been passed down through the generations. The tale of a cursed Pokémon cartridge with a solid black casing and label is one of the most well-known.

While the tale is nothing more than a creepypasta, people were so taken with the concept that a game based on it was developed. The game isn't the scariest thing in the world or even the scariest Pokémon ROM Hack but it is a fun accompaniment to a fun tale.

One of the things that makes Pokémon so popular is the environment that the games provide. Fans love traveling to different areas and training their favorite Pokémon. Pokémon Uranium adds to this by enabling players to explore a whole new and unique environment.

After a nuclear catastrophe, the player must journey to learn the truth about what happened and face eight gym leaders along the way. Nintendo is known for issuing cease-and-desist orders to anybody who uses their intellectual property, and this game was hit hard in 2016. As a result, the game's development was officially halted, but supporters continue to provide updates to this day, demonstrating how devoted the fandom is.

Many fans of the Pokémon franchise were first exposed to the brand via the television series. Many fans were upset when they eventually played the game and found Ash missing since the program follows Ash Ketchum on his quest to become a Pokémon master. His name is never mentioned in these early paragraphs, despite the fact that he is unofficially in the game. That's exactly what Pokémon Ash Gray is here to correct.

The game is a Fire Red ROM hack that follows Ash on his adventure from the anime. This game allowed people to play the game they had fantasized about since they were youngsters. Ash Gray has a devoted following and is becoming more well-known with each passing year.

Clockwork is a Pokemon fan game based in the Rosari area, developed using the Pokemon Essentials engine. Humans and Pokemon coexist peacefully in this location. Your journey begins when you are called by the time-traveling Pokemon Celeb, who informs you of the region's impending threat from Team Epsilon. You've been requested to assist preserve Rosari by preventing the notorious Team Epsilon from erasing the region's memories.

Clockwork has a lot of interesting features, including appearances from Generations 1-4 and unique Pokemon, a quest system, a realistic time cycle, time travel, and all-new Pokemon evolutions that may be triggered in the middle of a fight.