PEMF Therapy Quackery: A Closer Look At The Facts & Lies 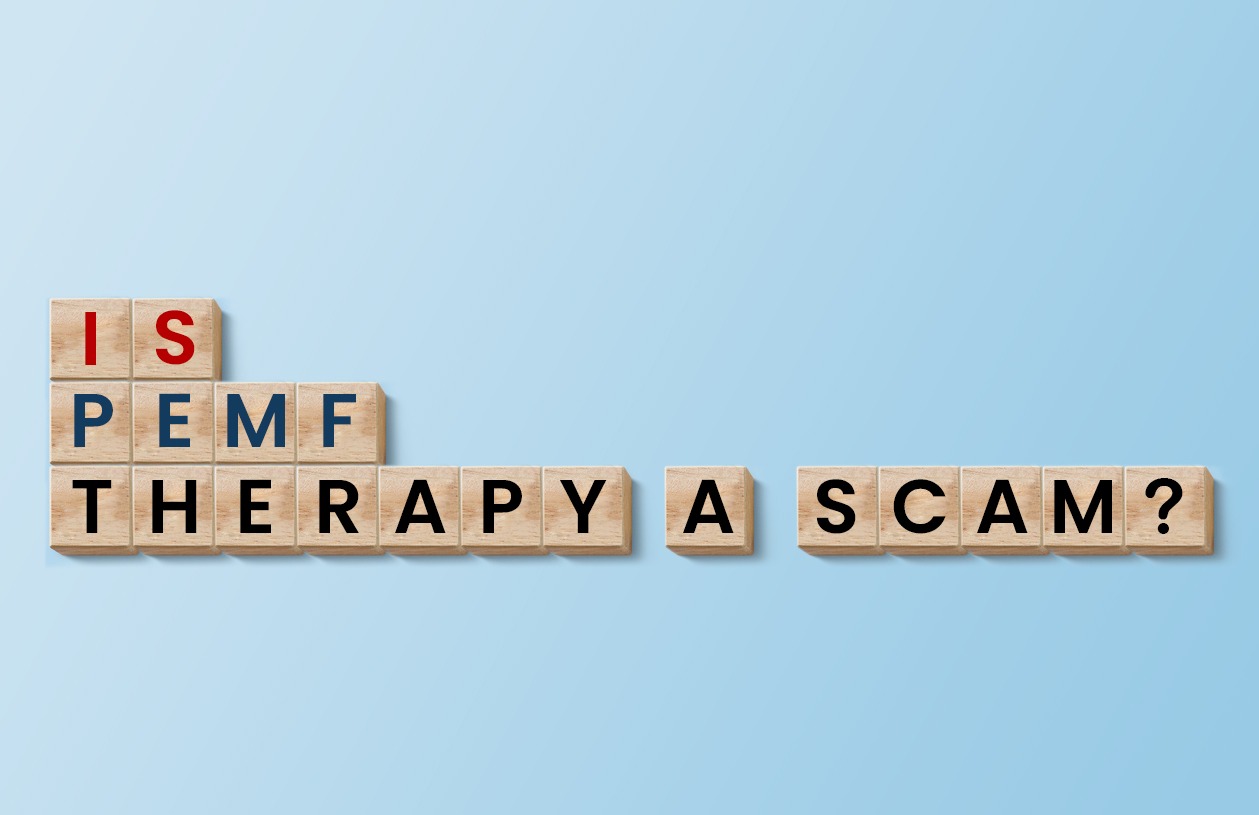 Due to its safety, efficacy, and simplicity of use, PEMF is currently one of the trends in natural health that are expanding the fastest. These gadgets release electromagnetic pulses that have an impact on your body's electrically charged ions and molecules.

This promotes better and quicker healing by enhancing microcirculation, which is the movement of blood in the smallest blood vessels. Muscle, bone, tendons, and even organs can all be repaired and healed using it.

Because PEMF is fully safe and non-invasive, it is so widely used. PEMF pulses are not harmful, in contrast to high frequency electromagnetic pulses as those produced by X-ray equipment and even microwaves. These pulses have such remarkable advantages because they are low frequency and very similar to those seen in nature.

This means that you don’t have to worry about any negative side effects of PEMF Therapy. To learn more about how PEMF devices operate, continue reading.

Why is PEMF therapy considered quackery by some?

The issues with PEMF and quack medicine come down to two things: ignorance and misunderstanding. Some people have misconceptions regarding PEMF therapy that is based on erroneous or incomplete information.

A long history of doubt has existed regarding pulsed electromagnetic field therapy. As a result, some people have written about PEMF therapy without even trying to understand the physics behind it.

What are the reasons for misconceptions about PEMF therapy?

Treatment modalities that are similar yet distinct have been shown to be ineffective. Although it likewise uses electromagnetic energy and dates back to in the early 20th century, radionics had no biological advantages.

It is a common misconception that all electronic gadgets that utilise electromagnetic radiation are the same.

Pulsed electromagnetic field therapy and electroshock therapy are occasionally combined in people's minds. Again, these two approaches are completely dissimilar, yet some people’s perceptions of PEMF therapy are shaped by the stigma associated with electric shock therapy.

In reality, a lot of individuals are unaware that PEMF therapy uses electricity that never enters the body. It is only used to produce electromagnetic fields and charge the coils.

Some people continue to believe that static magnets offer therapeutic benefits. Not at all!

Those who are aware that claims that static magnets have healing properties are unsupported by scientific evidence presume that pulsed electromagnetic field therapy is similarly invalidated by this. Once more, this is untrue.

PEMF therapy and the steady magnetic field created by a static magnet are very different from one another.

PEMF is risk-free and efficient

Misinformation can only be dispelled by education. PEMF therapy has received FDA approval for use in a number of therapeutic fields and is supported by scientific research. The advantages of PEMF therapy have been demonstrated in more than a thousand research investigations.

The FDA has approved PEMF therapy as a post-operative treatment, as well as a treatment for depression, anxiety, and muscular stimulation. The FDA designated PEMF devices as Class II devices in 2015. Our PEMF devices are wellness products with FDA registration.

Devices that use PEMF therapy emit electromagnetic waves with various wavelengths to aid and support the body's natural healing processes.

You might be wondering how PEMF technology can be good for the body when other electromagnetic pulses, including those from microwaves and X-ray devices are harmful.

The distinction is in the time and frequency: PEMF therapy devices produce waves in brief bursts at extremely low frequencies, which are more similar to the electromagnetic waves that naturally occur.

In fact, most of the waves that are encountered during PEMF treatments have a lower frequency than those that you would encounter during a thunderstorm.

The Advantages of PEMF

For more than 60 years, there has been substantial research on PEMF devices and their effects. These studies have demonstrated the devices' safety and their ability to address several issues and complaints quite successfully. When you use one of these devices, you might experience some of the following advantages:

Due to these advantages, PEMF devices have been utilised to treat a variety of issues, including recent or old injuries, specific cancers, and illnesses like arthritis, chronic Lyme disease, post-Lyme syndrome, neuromuscular disorders etc.

Does PEMF Therapy Work in Practice?

In PEMF therapy, low frequencies permeate through the skin and into the muscles, tendons, bones, and even the organs to stimulate cell energy and promote the body’s own repair mechanisms.

Positive and negative magnetic charges are present in cell membranes, however occasionally these charges don’t work because the cells can deteriorate over time or sustain damage from an accident.

The ions that carry the chemical components your body requires, such potassium and calcium, cannot exchange between your cells as a result. Chronic pain, exhaustion, and inflammation are symptoms that result from this sort of dysfunction. Targeting and drawing the body’s attention to these locations using PEMF is a non-invasive method.

What does research say about PEMF Therapy?

Here is what research into the use of PEMF therapy has revealed.

Due to the effectiveness of this natural therapy, there is unfortunately a lot of misinformation regarding the best PEMF device.

This has also led to intense competition, with some manufacturers offering PEMF devices with ostensibly wonderful extras. Naturally, the rates for these items are much greater. Unfortunately, there is no proof that these “extras” offer any extra advantages. The following are some of the extras you can come across when picking your PEMF device:

All of this may sound extremely amazing, but it has little bearing on how well PEMF device works. Absolutely no evidence exists to support the claims that any of these elements have extra effects or enhance the advantages of the fundamental gadget or its electromagnetic pulses.

Unfortunately, in order to sell a very basic piece of technology for a very high price, people are simply trying to make the device appear more complex.

Use only reputable PEMF devices for sale, please.

Have we piqued your interest in PEMF devices? Here are some further fascinating facts.

The earliest PEMF devices originated in the Czech Republic, travelled to Hungary in the 1980s, and by the 1990s had spread throughout all of Europe. The first Helmholtz coil-based PEMF devices were rather large. The equipment was used to administer a consistent dose of magnetic energy to a patient. Modern PEMF machines, which are about the size of a yoga mat, use a magnetic loop coil that Nikola Tesla created before the PEMF machine even existed.

Since then, the first FDA-approved PEMF device has been used for a variety of post-surgical healing therapies, pain management, and even depression treatment. Its original purpose was to stimulate bone repair and treat nonunion fractures. Both people and animals can utilise the devices without risk.

After 2003, when NASA conducted a 4-year study on the use of electromagnetic fields to encourage repair and growth in mammalian tissue, PEMF technology saw a rise in therapeutic applications. Scientists hypothesised that the cause of astronaut weariness, depression, and bone loss has to do with being away from the helpful magnetic field that naturally emerges from the Earth after pulsed electromagnetic fields were successfully employed to heal astronauts after their return from space.

There Is a Long History of Clinical Success with PEMF Therapy

PEMF therapy uses pulsing electromagnetic waves at particular frequencies to heal the body at the cellular level with years of great clinical experience. Pulsed electromagnetic field therapy has been used in clinical trials conducted by medical facilities, physiotherapists, rheumatologists, and neurologists since it was given FDA permission in 1979.

It’s common to refer to electric and magnetic fields (EMFs) as radiation. EMFs are invisible fields of energy linked to electrical power and lighting pulses. EMFs can be classified into one of two radioactive groups based on their wavelength and frequency.

This low - to medium-level radiation, which is present in computers, microwaves, radio frequencies, cell phones, Bluetooth devices, power lines, and MRI equipment, is generally thought to be safe for people. Ionizing radiation, like the UV rays from sunlight and the X-rays from X-ray equipment, has the potential to cause DNA and/or cellular damage with prolonged exposure.

When individuals are ignorant, it’s simple to fall for exaggerated promises and buy devices that look legitimate but are useless for the particular issue you have. The truth is that any PEMF machine is likely to have some positive effects on health, albeit they might not be as significant as you had hoped.

Even doctors must conduct in-depth research to fully comprehend the science behind PEMF therapy. These details are just absent from traditional medical education.

If you merely research PEMFs on the internet in general, you generally won’t have the scientific background necessary to make the best decision.

Sentient Element is the most powerful PEMF machine in today’s market.