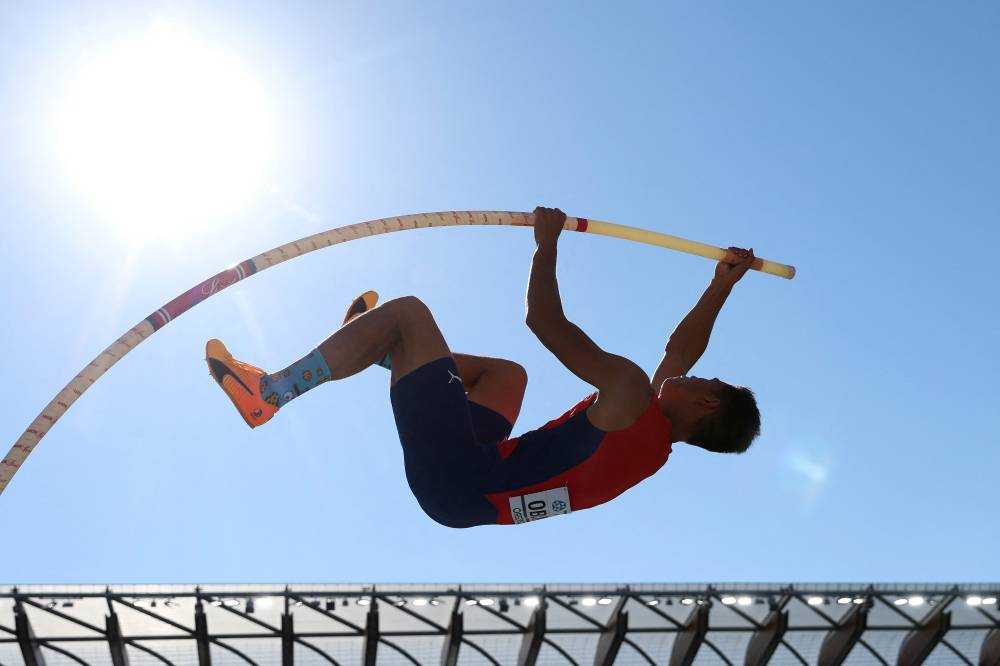 At the World Championships, Ej Obiena soars past Nilsen to a historic bronze medal and sets a new record for Asia.

Due to the fact that world-renowned pole vaulter Armand Duplantis was unable to compete, World Championship bronze medalist EJ Obiena was given the opportunity to compete against and defeat Chris Nilsen of the United States, who is ranked second in the world.

Obiena, the world No. 3 and Asian record-holder, recently blew away a field that included Nilsen in the Stabhochsprung Meeting in Jockgrim, Germany.

EJ Obiena, a pole vaulter from the Philippines, has been proving to the rest of the world that he is more than capable of competing on the most important stages of the sport. 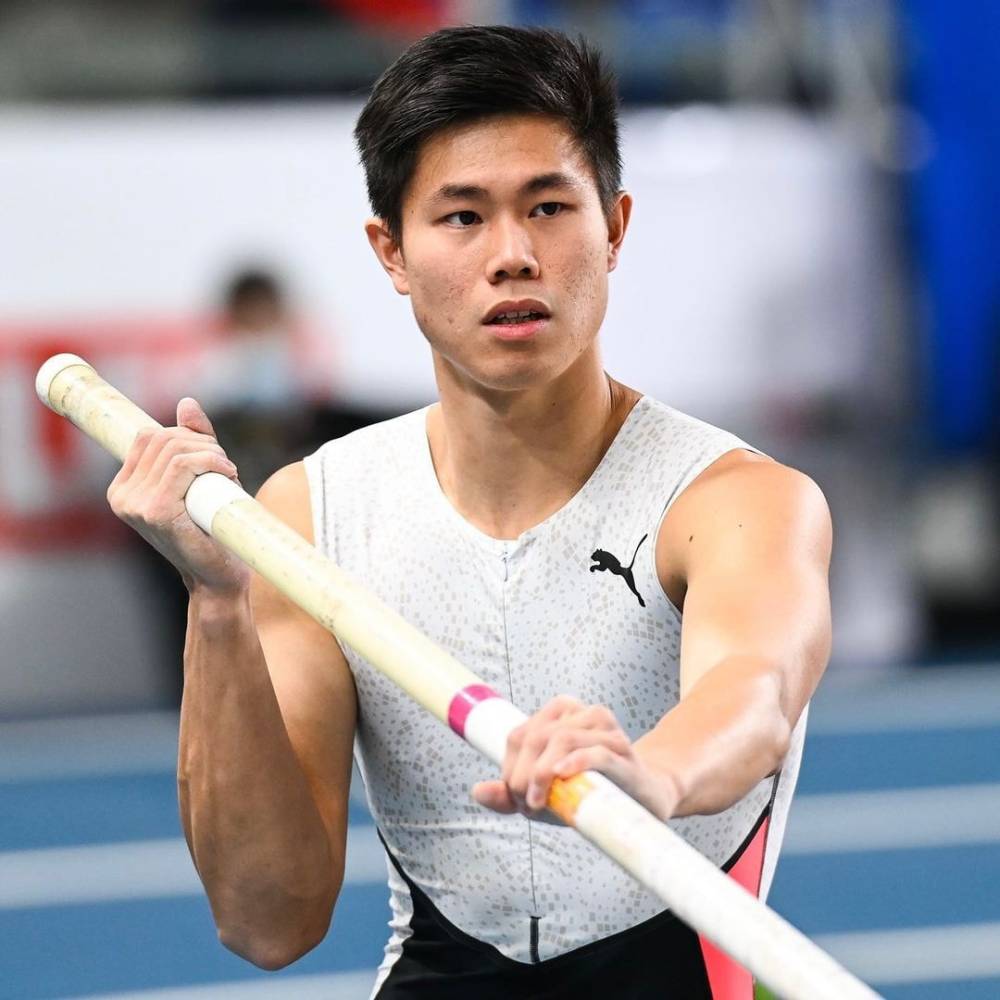 In 2019, Obiena made history by becoming the first Filipino athlete to qualify for the Tokyo 2020 Olympics.

He did so by finishing in the top three in a competition held in Chairi, Italy.

Obiena, who is currently ranked No. 6 in the world, quietly navigated his way through the twists and turns that his life presented before qualifying for the Tokyo Games.

The Obiena family is very involved in the competitive athletic community of the country.

His father Emerson once held the national record and competed in the Southeast Asian (SEA) Games, where he won a silver medal and a bronze medal.

His mother, Jeanette, competed as a hurdler during her time at the university, and his sister, Emily, followed in their father's footsteps by becoming a pole vaulter herself, just like their father.

After watching his father achieve success in the sport, Obiena got his start in pole vaulting when he was just six years old.

Obiena was supported and encouraged to pursue pole vaulting by his family, who were avid sports fans.

As a result of his success in the sport, he was awarded university scholarships to attend Ateneo and University of Santo Tomas.

The young athlete broke the 5.0-meter mark in the pole vault competition in 2014, surpassing his father's previous record of 4.95 meters.

In 2014, Obiena relocated to Formia, Italy, to work with Ukrainian coach Vitaly Petrov.

Petrov is best known for his work with Sergey Bubka, who won a gold medal at the 1988 Olympics under his tutelage.

At the beginning of the 2000s, Petrov was successful in training not one, not two, but four Olympic gold medalists and world champions.

One of these was the Brazilian Thiago Braz.

Braz, who took home the gold medal at the Olympics in 2016, is a close friend of Obiena, and the two athletes continue to train together.

Since then, Obiena has been given the opportunity to compete on the elite pole vault circuit in Europe.

There, he regularly faces off against the likes of the American-Swedish wunderkind Armand Duplantis, the American Sam Kendricks, and the Frenchman Renaud Lavillenie.

At the 2017 Southeast Asian Games, Obiena suffered an injury to his anterior cruciate ligament (ACL) just one day before departing for the competition in Kuala Lumpur, Malaysia.

This was the most heartbreaking moment of his career.

However, after suffering the injury, Obiena was able to come back even stronger and accomplish even more milestones.

He broke the previous national record three times in 2019, culminating in a performance at the Chiari meet in which he recorded 5.81 meters, surpassing the Olympic qualifying standard of 5.80 meters.

After that, Obiena made a strong comeback and won his first gold medal at the 2019 Southeast Asian Games, which his country hosted.

He then went on to continue his dominance of the outdoor season by setting a new national record with a distance of 5.87 meters.

On his second attempt to surpass his own Asian and national record of 5.93 meters, which he had set at the 17th Golden Roof Challenge in Innsbruck, Austria, the previous year, the Olympian, who is 26 years old, successfully cleared the bar at 5.94 meters with plenty of room to spare. 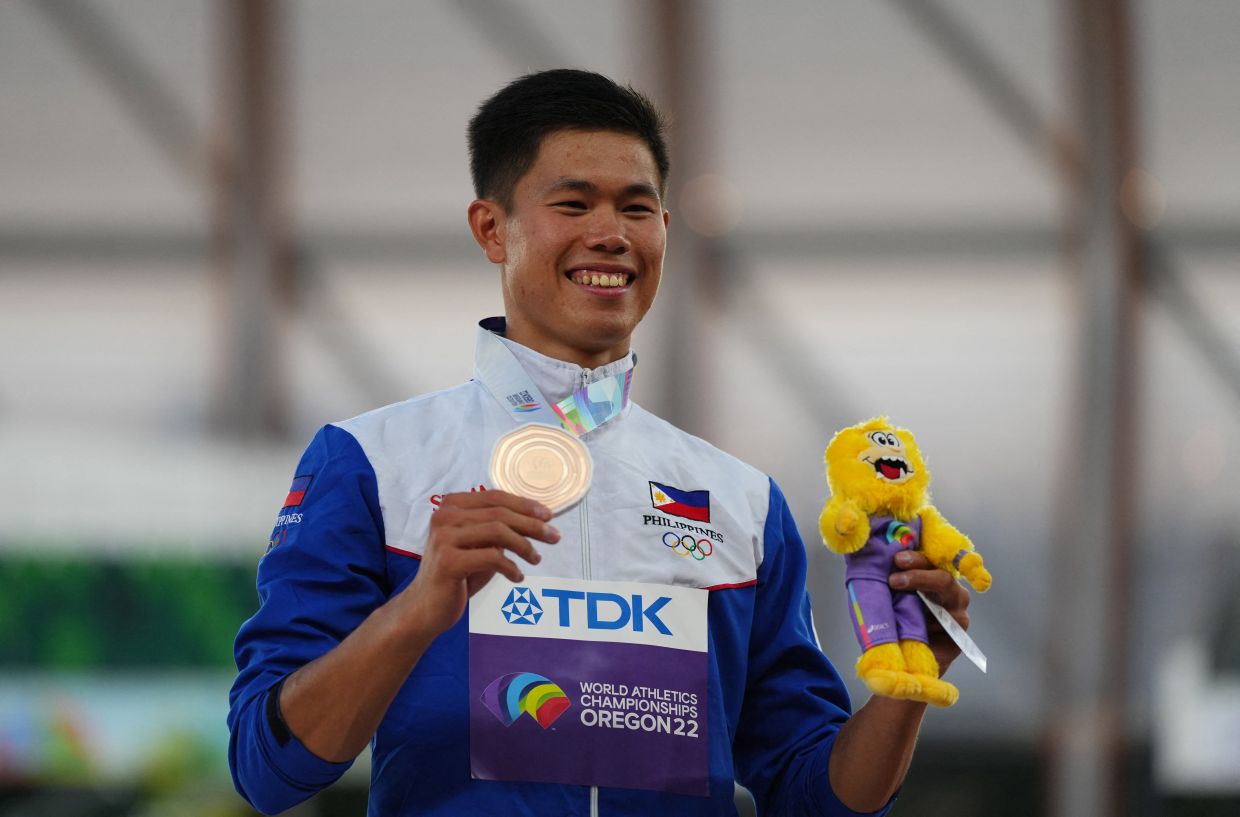 EJ Obuena holding his bronze medal while smiling on camera

He holds the No. 6 spot in the world rankings.

The fact that he was the first Filipino to place in the top three of such a prestigious competition elevated the significance of the accomplishment to an even higher level.

The vaulter who won the gold medal at the Southeast Asian Games cleared 5.81 meters to take first place, edging out Nilsen, who had won the silver medal at both the World Championships and the Tokyo Olympics.

After achieving the same height of 5.71 meters, Nilsen had to settle for the silver medal, while Kurist Marschall of Australia and Bo Kanda Luta Baehre of Germany shared the bronze.

Obiena tried three times to set a new Asian record and achieve a personal best by jumping 5.95 meters, but he was unsuccessful.

Even though his winning effort was a far cry from the career best 5.94m that he set in the world tilt that took place in Eugene, Oregon last month, it was sufficient to secure a spot for the Filipino athlete in the World Championships that will be held in Hungary the following year.

It was also a wonderful opportunity for Obiena to get a head start on his campaign in the second part of the European circuit.

Obiena's chances of winning a medal at the 2024 Olympics in Paris have been given a significant boost as a result of this accomplishment.

Obiena's ultimate goal is to become the first Filipino athlete to win an Olympic medal since Miguel White took bronze in the men's 400-meter hurdles at the 1936 Berlin Olympics.

In addition to this, it helped him improve his preparations for the 19th Asian Games, which were postponed but are now scheduled to take place in Hangzhou, China, in 2019.

At these games, he hopes to break a streak of not winning an athletics gold medal.

"What a fantastic beginning to the second half of the season, we won the gold, and then we set the standard for the World Championships that will be held in Hungary the following year," said Obiena.

In addition to those competitions, Obiena will take part in the St. Wendel City Jump in Germany on August 31, the Memorial van Damme in Brussels, Belgium on September 2, the ISTAF 2022 in Berlin, Germany on September 4, and the Golden Fly in Schaan, Liechtenstein on September 11.

What Is The Sport Of EJ Obiena?

According to the most recent rankings provided by World Athletics, Obiena is currently positioned as the third-best active male pole vaulter in the world.

How Tall Is Obiena?

Ernest John "EJ" Obiena of the Philippines finished third in the men's pole vault final of the 2022 World Athletics Championships in Eugene, Oregon. Obiena, the only Filipino and Asian to reach the finals, cleared the 5.94-meter mark, setting a new Asian record.

Lydia de Vega won the women's 100-meter dash at the 1986 Asian Games, which was the last time the sport of athletics brought home a gold medal from those games.