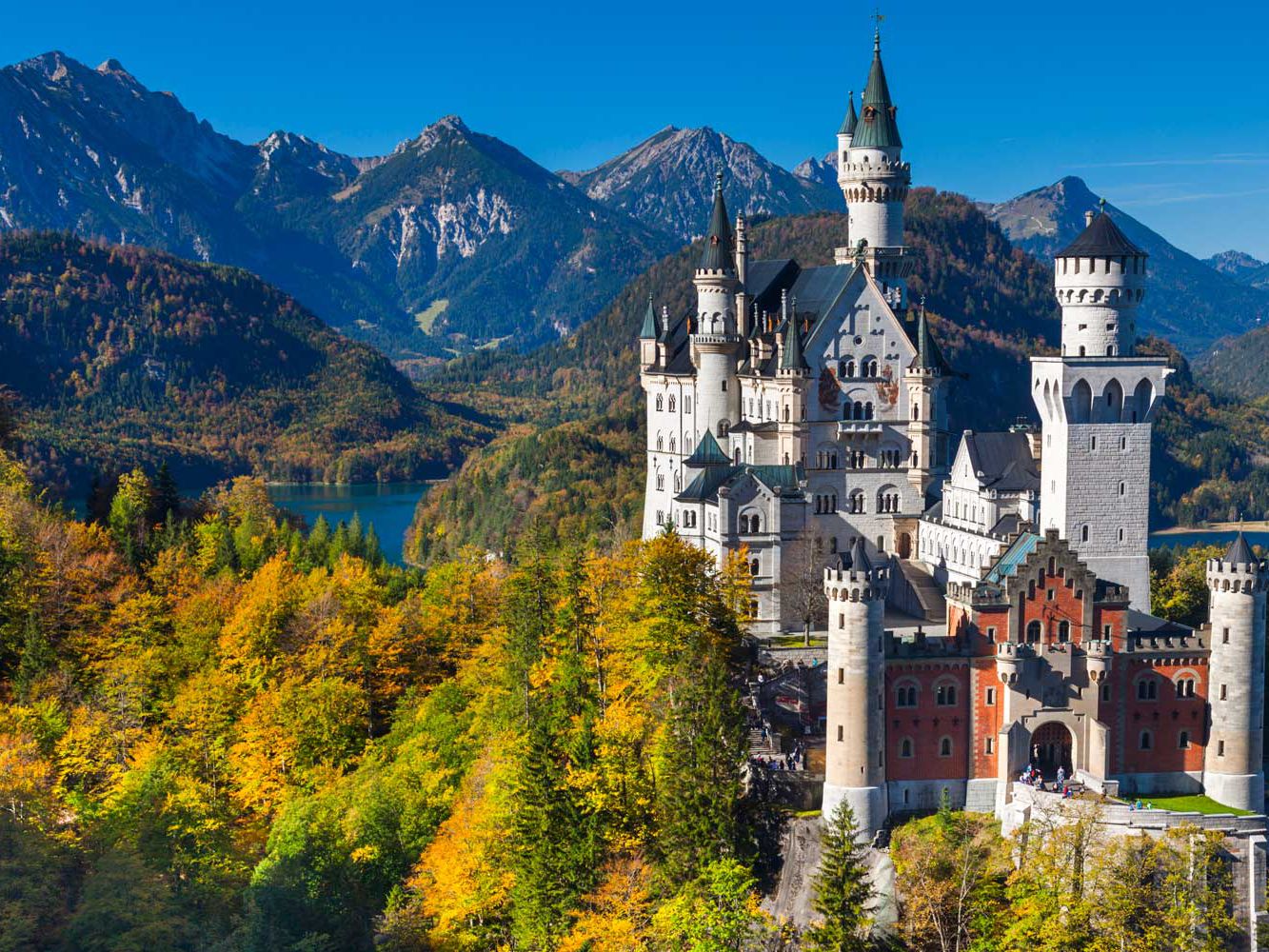 Few places on Earth look more like illustrations from a fairy tale than Neuschwanstein Castle.

Neuschwanstein (or Schloss Neuschwanstein, as it is known in German) appears to have been plucked straight from a fairy tale, with its towers, turrets, frescoes, and throne hall.

However, the story behind this extravagant palace nestled in the Bavarian Alps is far from idyllic.

Neuschwanstein is an intricate castle near Füssen, Germany, built by order of Bavaria's King Louis II ("Mad King Ludwig") atop a rock ledge over the Pöllat Gorge in the Bavarian Alps.

Construction started in 1868 but was never finished. 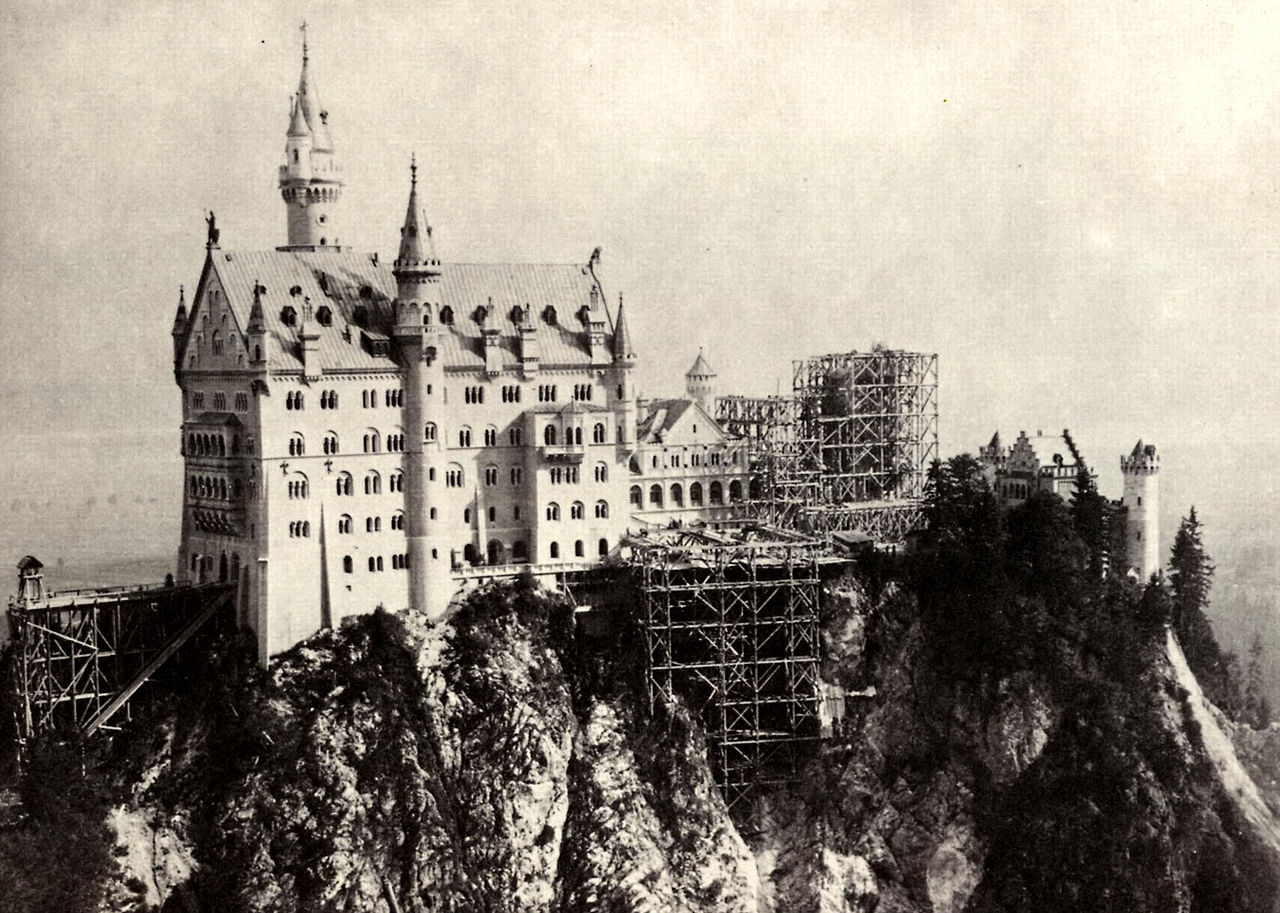 Louis II spent a large portion of his childhood at Hohenschwangau Castle, a neo-Gothic, medieval-inspired castle richly decorated with scenes from legend and poetry.

Following his accession to the throne in 1864, Louis set out to construct the "New Hohenschwangau Castle," as Neuschwanstein was known until his death, which he intended to be an even better reproduction of a medieval-style castle in keeping with his fairy-tale vision of monarchy.

Neuschwanstein was built on the ruins of two smaller castles that were demolished in 1868.

Although Louis expected the entire project to be finished in three years, only the gateway building was ready for occupancy by 1873.

The topping-out ceremony took place on January 29, 1880, but the castle was still under construction at the time.

The technical fittings were finished four and a half years later, but the castle remained unfinished in 1886, when Louis drowned himself.

He'd only been there for about six months, on and off.

The unfinished castle was opened to the public as a museum a few weeks after his death.

The castle's bower and square tower were not finished until 1892, and only about a dozen rooms were ever finished.

Neuschwanstein is known as the "Castle of Confusion."

It was constructed at a time when castles were no longer required as strongholds, and despite its romanticized medieval design, Louis required it to have all of the latest technological comforts.

The opulent structure includes a walled courtyard, an indoor garden, spires, towers, and a man-made cave.

Unlike the medieval castles it was inspired by, Neuschwanstein has running water throughout, including flush toilets and hot water in the kitchen and baths, as well as a forced-air central heating system.

An elevator from the kitchen three stories below serves the dining room.

Louis even made certain that the castle was linked to telephone lines, despite the fact that at the time of its construction, very few people had telephones.

Germany's Neuschwanstein Castle is one of the most famous castles in the world.

It attracts over one million visitors per year, making it one of Europe's most popular tourist destinations.

The castle was built in 1869 as a personal space for King Ludwig II of Bavaria, as a retreat, and as a tribute to Richard Wagner.

The castle was the inspiration for the Beast's castle in Disney's 'Beauty and the Beast,' and as a result, it is extremely popular with everyone.

If you want to visit the castle when you visit Germany, you should have all the necessary information.

The following list contains all of the important and useful tips that should be known before or during a visit to the Neuschwanstein Castle.

The town of Hohenschwangau, in which the castle is housed, can be reached from the city of Munich in less than 24 hours by train. 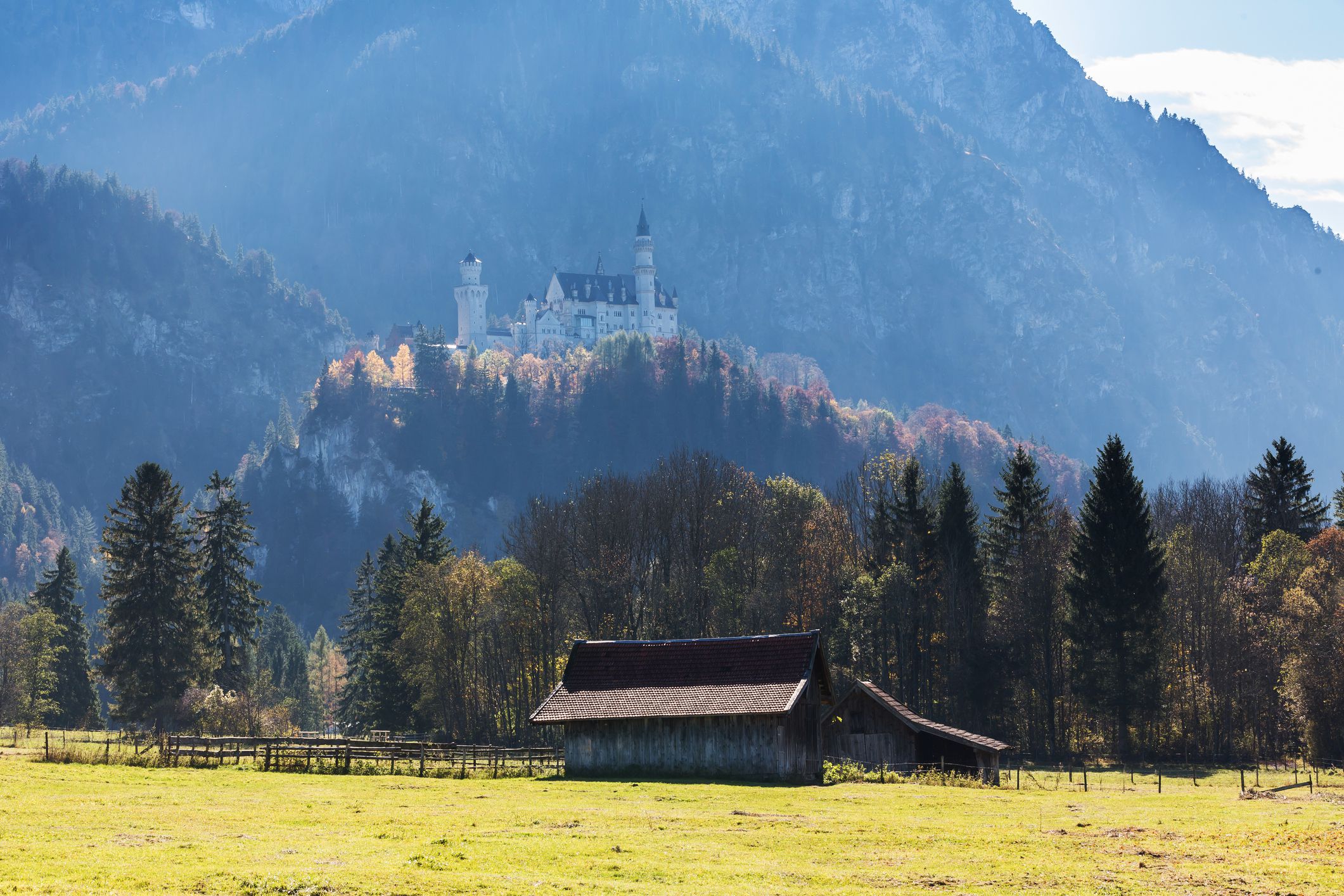 You have the option of traveling to the castle immediately, which would require a great deal of energy, or you can arrive in the town a day early and rest in a hotel that is located nearby.

Germany's nightlife is constantly buzzing with activity, and the two cities themselves are home to a bevy of other breathtaking attractions.

You should get enough rest for the night before venturing out into the town so that you can do so safely.The following day, you are free to go and explore the Castle.

The Castle is a popular tourist destination, and a good number of people ensure that it is on their itinerary whenever they travel to Germany. 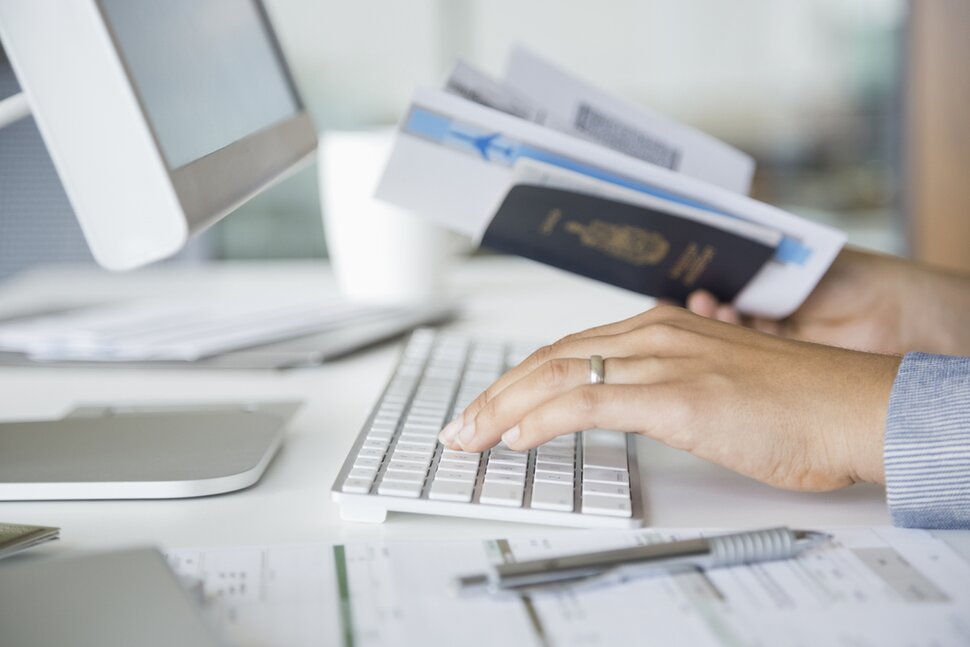 A man on his computer with some stuff on the table

Purchasing your plane tickets in advance is not only a good idea but will also spare you a significant amount of time and trouble.

The grounds of the castle can be explored without purchasing a ticket, and the panorama that can be taken in from those grounds is truly breathtaking.

However, if you have decided to go through the trouble of seeing it from such a close distance, then you should make the effort to book tickets to see the inside of the Castle as well.

After you have obtained the tickets, it is imperative that you check them thoroughly.

Tickets are the only thing that will allow you to enter the palace at any time. 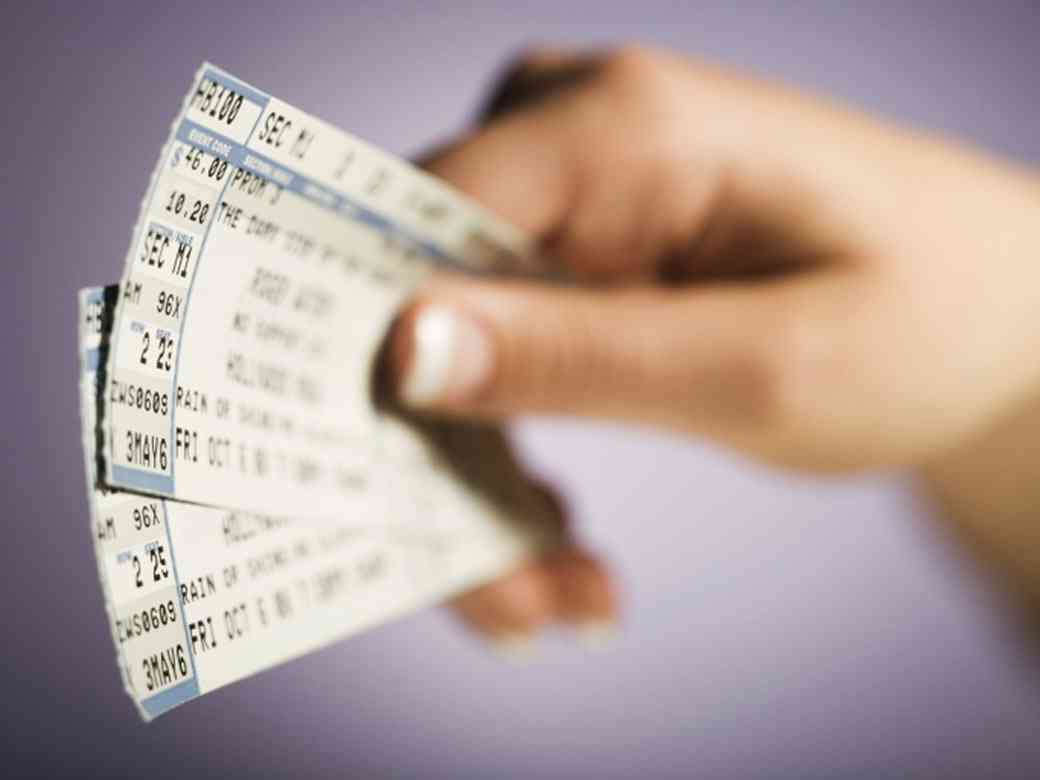 In addition, as a result of the hectic schedule and the enormous number of people who go to the Castle, the guided tours of the interior are broken up into time slots, with a maximum duration of 35 minutes allotted to each slot.

Please make sure that you arrive at the castle at the allotted time and that you are prompt.

Take The Bus Up To The Castle

Due to the fact that the castle is located on a hill, it will take you at least half an hour to walk to the front gate of the property. 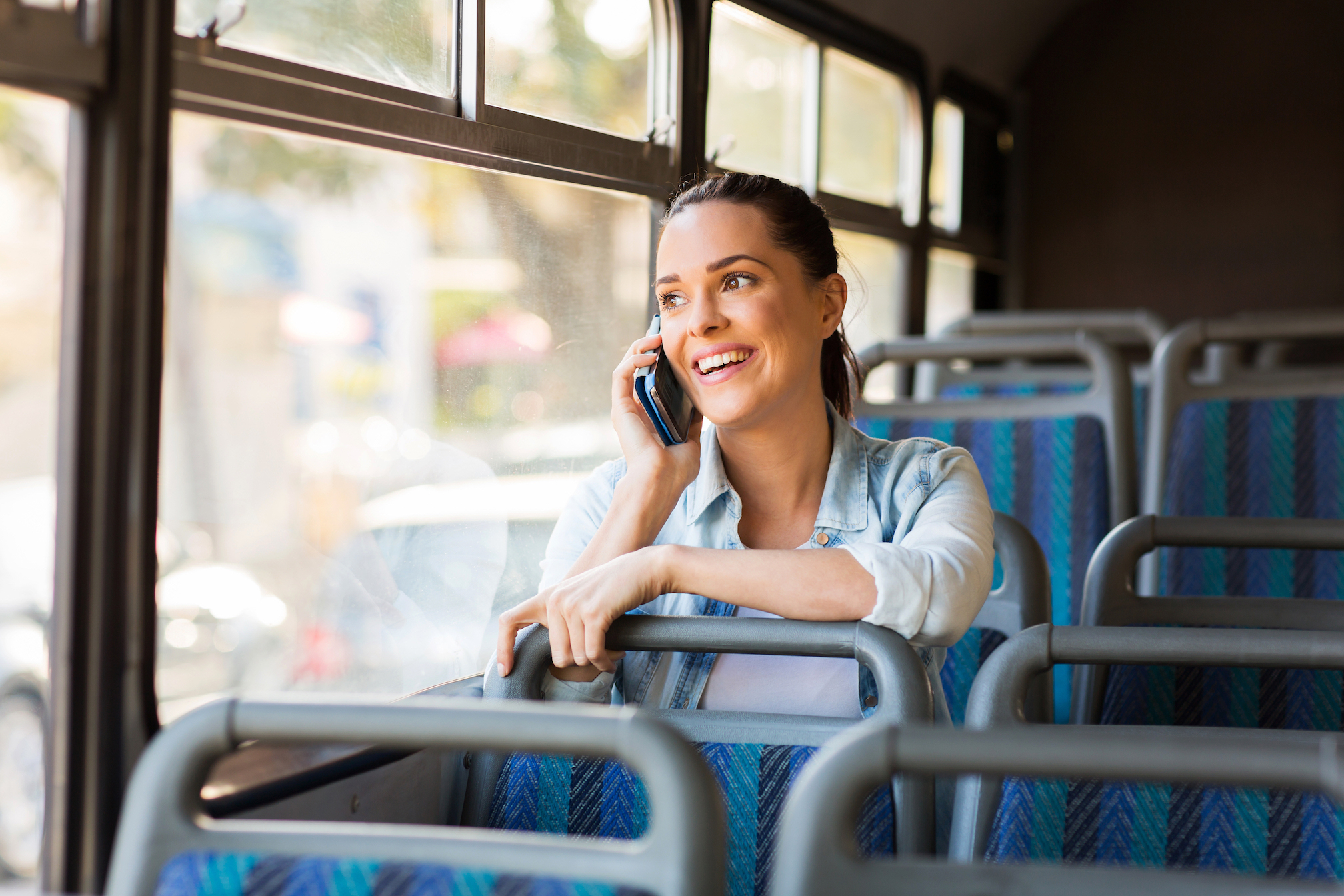 A woman with her phone inside a bus

This could result in fatigue as well as a delay.

You should save your strength and time for the 35-minute tour of the castle's interior, after which you will be able to descend the hill and walk back to your house.

It takes approximately ten minutes to get to the entrance of the castle using the shuttle bus that is provided by the castle.

In addition, for those interested in a more regal experience, the Castle offers a horse-drawn carriage ride that lasts somewhere between 20 and 25 minutes.

In either case, you should get there early because both of these services have long lines of people waiting to use them, including both locals and tourists.

Explore The Exteriors Of The Castle

The interior and exterior of the castle are equally stunning and magnificent in their own unique ways. 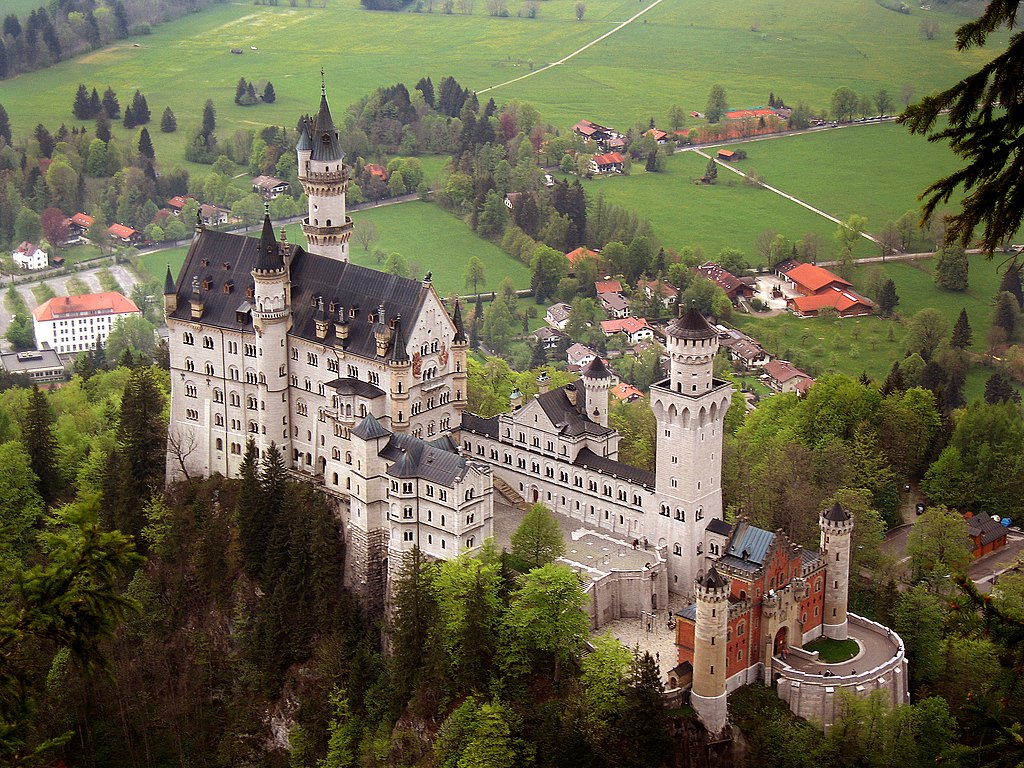 An aerial view of the exteriors Of the castle

The expansive castle utilizes an enormous space for its courtyard and offers one of the most breathtaking perspectives of the neighborhood.

The Castle is situated in a hilly area and is engulfed in an abundance of lush vegetation on all sides.

The Lake Alpsee, which is also known as the Swan Lake, can be found at the foothills of the castle, and it serves as a habitat for a diverse array of flora and fauna.

This provides the Castle with an aesthetic vibe that is unparalleled, and it continues to be one of the primary reasons for the Castle's popularity all over the world.

Other Attractions Of The Town

The town of Hohenschwangau is home to a variety of tourist destinations, and Neuschwanstein Castle is just one of them.

The city is home to a wide range of additional tourist destinations, as well as numerous excellent local eateries, where you can sate your hunger with traditional German cuisine.

The following is a list of some of the additional attractions:

When King Ludwig II was a child, he and his family would take their vacations at the yellow-colored castle that is located in the town. 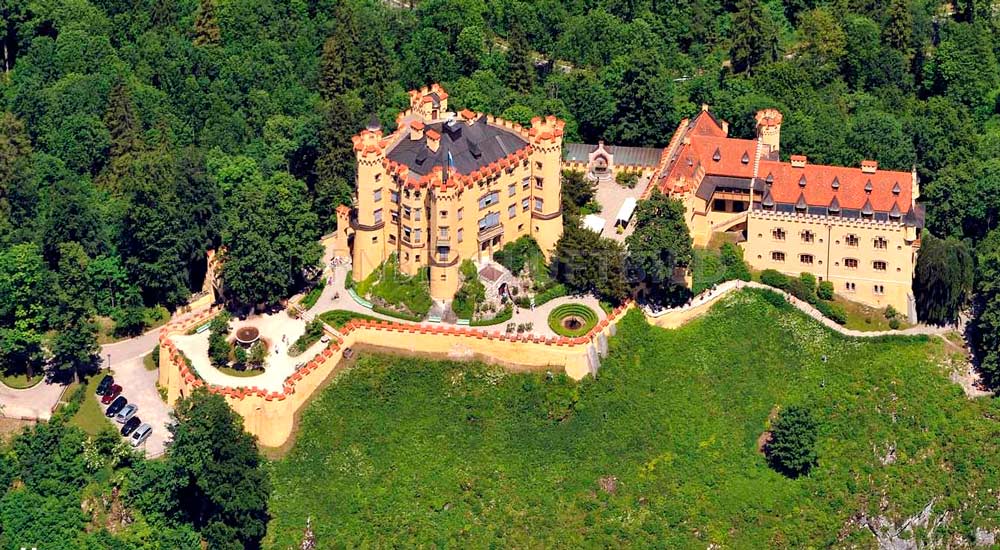 An aerial view of Hohenschwangau Castle

When he was older, he would spend his time there hunting and fishing.

It is believed that this was the original inspiration behind King Ludwig's construction of the Neuschwanstein Castle, which was located atop the hills.

If you are interested in history, you should definitely consider paying a visit to this castle because it is packed with centuries' worth of family history and artifacts that belonged to King Ludwig and his ancestors.

If you go to Castle Neuschwanstein during the warm summer months, you can cool off in the waters of Lake Alpsee, which is located at the base of the surrounding hills. 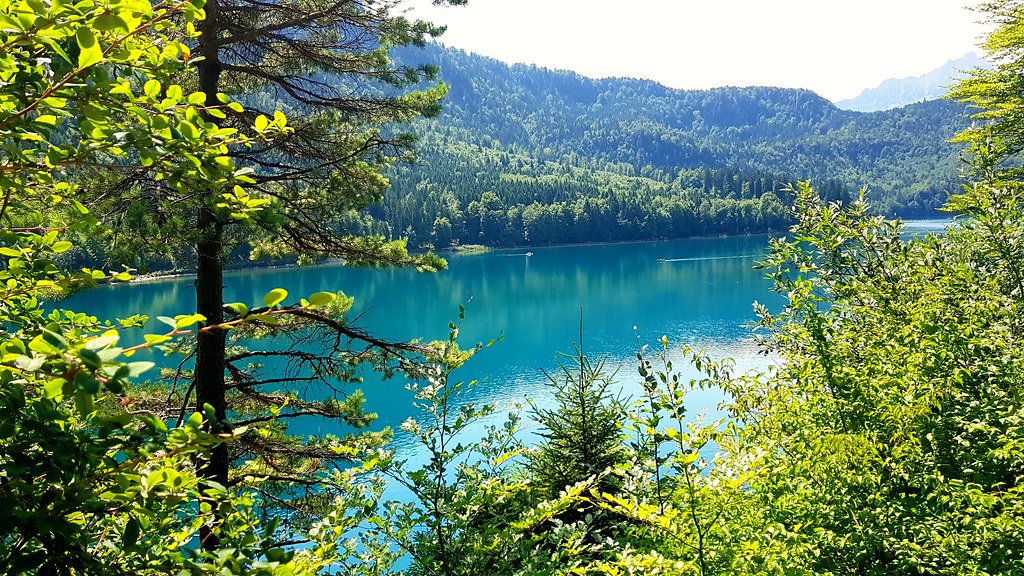 A stunning view of Lake Alpsee

However, you should know that the Lake is chilly even during the summer because of the temperatures in Europe, so prepare yourself accordingly.

You are welcome to pay the lake a visit at any time, as it continues to be one of the most popular destinations for tourists.

Museum Of The Bavarian Kings

The Museum of the Bavarian Kings is the ideal destination for anyone who takes an interest in the past, particularly those who are curious about the origins of the various castles and the development of the nation. 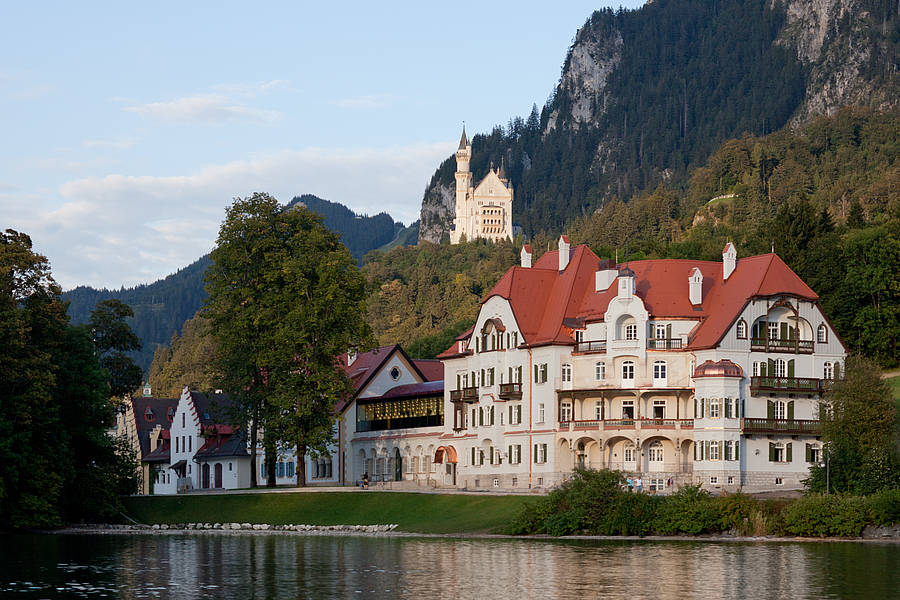 The Museum Of The Bavarian Kings

The museum is the repository of the illustrious history and culture of the Bavarian Dynasty, and it highlights the many accomplishments that have been amassed over the course of several centuries by a variety of Bavarian monarchs.

How Long Do You Need At Neuschwanstein Castle?

The tours of each castle take approximately 35 minutes, but the entire experience of picking up tickets, walking or taking the bus to the castles, touring both castles, and time between tours adds up to approximately 4-5 hours in total time spent.

What Is The Best Way To View Neuschwanstein Castle?

The best place to photograph Neuschwanstein Castle is just below the main gate. There is a small glass viewing platform above the abyss that is ideal for a family photo. You won't be the only one with this idea, so you may have to wait a while to get your shot.

What Is The Best Time To Visit Neuschwanstein?

The months of November through April have the fewest visitors (except during the holiday seasons of Christmas and Easter). Although the weather may not be ideal, you may be able to see Neuschwanstein covered in snow during the winter months.

One of the most well-known and frequently visited tourist destinations in all of Europe is the fairytale-like Neuschwanstein Castle.

During the busiest times of the year, the castle can host as many as 1.3 million visitors per day.

The Castle's widespread popularity can be attributed to the fact that it has been depicted in a number of Disney movies.

It is adored by both children and adults of all ages.