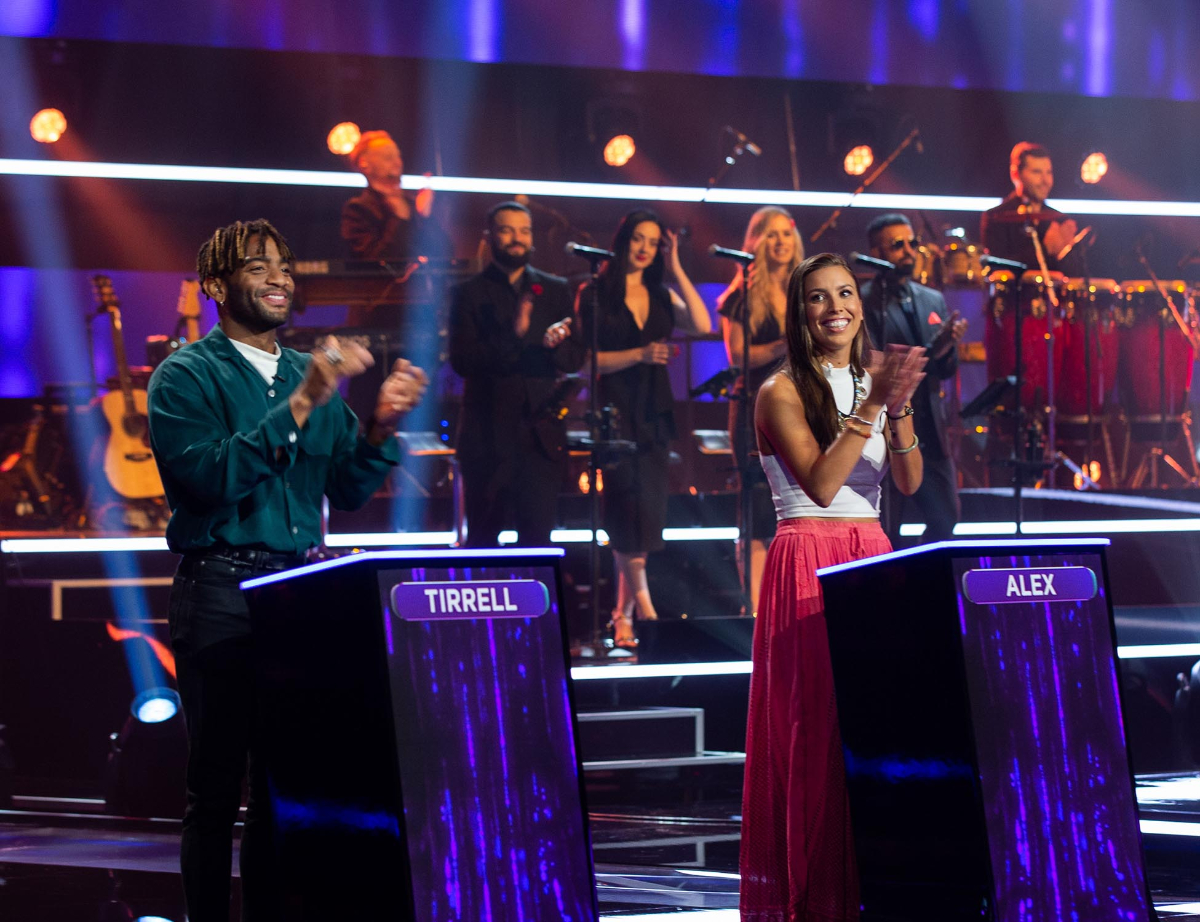 Name That Tune is a television game show in which two players compete against each other to see who has the best knowledge of whatever tune they know. The program, which began broadcasting on NBC Radio in the United States in 1952, was developed and produced by Harry Salter and his wife, Roberta, who also served as executive producers.

The first episode of the British version aired in 1956. Marion Ryan was the lead vocalist on Granada Television's famous musical quiz show Spot the Tune for seven years, appearing in a total of 209 half-hour episodes during that time. A number of celebrities, including disc jockey Pete Murray, Canadian pop singer Jackie Rae, and comedians Ken Platt and Ted Ray, served as hosts for the event. It was Peter Knight and his orchestra that provided the big band accompaniment.

The participants were required to identify the title of a song after just hearing a brief sample of it. The person who wins the most money must attempt to identify as many £5 songs as he or she can in the allotted time of 40 seconds. Additionally, the program included a jackpot song, which reached a maximum of £600 on at least one occasion.

Name That Tune was subsequently resurrected on ITV as a spin-off show. The pilot for the United Kingdom was filmed in 1976 and was later used as a 15-minute segment on the popular entertainment programme Wednesday at Eight, which evolved into London Night Out.

However, due to the game's widespread popularity, producers Thames Television decided to convert Name That Tune into a half-hour weekly television series starting in 1983. Alan Braden and his orchestra provided the big band for the show's opening and closing numbers.

Tom O'Connor served as the show's host from 1976 to 1983. It was Lionel Blair who took over from O'Connor in 1984 and continued as host until the show was removed from the ITV schedules in 1988.

Maggie Moone and the Irish group Sheeba performed the songs that the competitors had to predict, while Ronnie Price served as the pianist (his hands were a frequent fixture of the show). The announcer for the game was Nick Jackson.

When the programme was resurrected on Channel 5 in 1997, it featured Jools Holland as the presenter for two seasons in 1997 and 1998.

When Vernon Kay's Gameshow Marathon aired on ITV on May 5, 2007, the program was temporarily resurrected, with Peter Dickson serving as announcer. It will be resurrected as the only new episode of Alan Carr's Epic Gameshow in the second season, which will premiere in 2021.

Two competitors were chosen from the studio audience and played in a variety of games to win points, cash, and prizes, among other things.

The winner of each of the first two games received ten points, while the winner of the third game received twenty points as a result of the tiebreaker. After the third game, the competitor who had accrued the most number of points advanced to the "Prize Tune" extra round.

Once one last song had been played, if there was a tie at the conclusion of the game, the first player to buzz in and identify that tune was the winner and went on to win the Prize Tune.

Onstage, a wheel was spun to decide who would win a $1,000 reward for correctly recognizing the song. The sums on the wheel ranged from £25 to £100. In addition, an outer wheel was spun, which included two spots marked "Double" and was spun in the opposite direction as the inner wheel. The winner of the round was the first to three songs out of five.

Contestants were asked to write down the name of a song they heard performed by the show's singer after hearing it. The singer substituted "la-las" for any words that would usually appear in the song title. Three different songs were performed.

During a song identification competition, the presenter gave a hint and the competitors swapped bidding on how few notes they needed to correctly identify the song. In the notorious format "I can name that song in X notes," each participant made their offer to their opponent in the form "I can name that tune in X notes," where X was any whole number.

The bidding came to an end when one of the contestants challenged the other to name a song. Bidding also came to a stop when a player big one note or (rarely) zero notes, with the aim of identifying the song solely from the clue given by the presenter, thus ending the game.

The competitor who scored three tunes first was declared the winner, and the third tune had to be acquired legitimately, rather than by default.

The players sat in the booth with headphones on, attentively listening to the song performed on the piano, which was typically by Ronnie Price-all they had to do was guess the title to win the huge reward.

The show's primary incentive was money, with right answers in most rounds earning prizes ranging from £25 to £200. "One fortunate participant might win more than £1200 in cash" (up to IBA restrictions) plus the opportunity to win a vehicle, as the show's inaugural season boasted in its title sequence (usually a Mini or similar small runaround).

There was also a "star award," although it was a "superb 4-band radio with double cassette stereo tape recorder" in our textbook example, which seems a bit disappointing as a "star reward."

On NTT, participants had to be above 35 to have a chance of answering the questions correctly. As a result, a healthy mix of male and female athletes took up the challenge. Because there was little room for conversation in this program, you only got to know them during the opening scene, when they all arrived on set and waved.

The word "middle-class" comes to mind here, as in one of the twelve-month-long Challenge episodes in which the contestants were "a school meals supervisor" and "an accounts representative."

The candidate was led onto the stage and placed in an isolation booth (which was wired so that they could only hear the host and the piano). The host then opened a golden envelope, gave the pianist the song's sheet music, and kept a sealed business-size packet in his hand. After that, the pianist performed the song as a 30-second timer ticked away.

The piano player stopped playing when the countdown hit 10 seconds, and the contestant in the booth (who could only provide one response) had to identify the song's precise title before the meter ran out.

The host then opened the envelope and revealed the song's title once the contestant had left the studio. If the player accurately predicted the outcome, they were awarded an additional reward, which was typically a new vehicle.

Jane Krakowski will be the presenter of a relaunched series on Fox called Name That Tune.

Randy Jackson, a former American Idol judge, has been hired as the show's bandleader, and it will debut on January 6th, after The Masked Dancer. It's from Fox Alternative Entertainment, Prestige Entertainment, which owns the show's rights, and Eureka Productions, who produced Holey Moley. The showrunner is Janine Cooper, who has worked on The Bachelor and The Masked Singer in Australia.

On Fox's unscripted schedule, it joins Beat Shazam, a Name That Tune-style competition hosted by Jamie Foxx that was revived for a fourth season.

The decision to make a ten-episode series comes three years after CBS tried to revive the iconic format, which was developed by Harry Salter and originally broadcast in 1953. A pilot was commissioned by CBS and hosted by Elizabeth Banks, but it was not picked up for a series.

Prestige Entertainment's Ralph Rubenstein and Noah Rubenstein, who worked on that version, will executive produce the series with Eureka Productions' Chris Culvenor, Paul Franklin, and Cooper.

The game show, which premieres at 9 p.m., puts players' musical expertise to the test as they compete for cash and prizes in a variety of difficult musical activities.

Each episode will include two half-hour competitions in which two participants compete against each other in a race against the clock to test their knowledge of songs performed by a live band. Before the famous Bid-a-Note round, each tournament includes a rotating selection of games from the original format.

The player who has the most money at the conclusion of Bid-a-Note wins the game and advances his or her bank to the Golden Medley bonus round, where he or she may earn more money and perhaps the $100,000 grand prize.

In 1952, NBC Radio broadcast the first episode of Name That Tune. It rapidly made the transition to television, airing on NBC and CBS from 1953 until 1959. After a 17-year absence, the program was revived for a syndicated run from 1974 until 1981, and then again in 1984, with hosts Tom Kennedy and Jim Lange.

"With this revised resurrection, we're delighted to bring the classic musical game show Name That Tune back to television." We can't wait for a new generation of families to get to play along with the iconic series at home," said Rob Wade, President, Fox Entertainment's Alternative Entertainment & Specials. "With Jane Krakowski as presenter and Randy Jackson, the Big Dawg himself, as band leader, this will undoubtedly be a harmonic pairing."