Most Frequent Angel Numbers And What They Mean 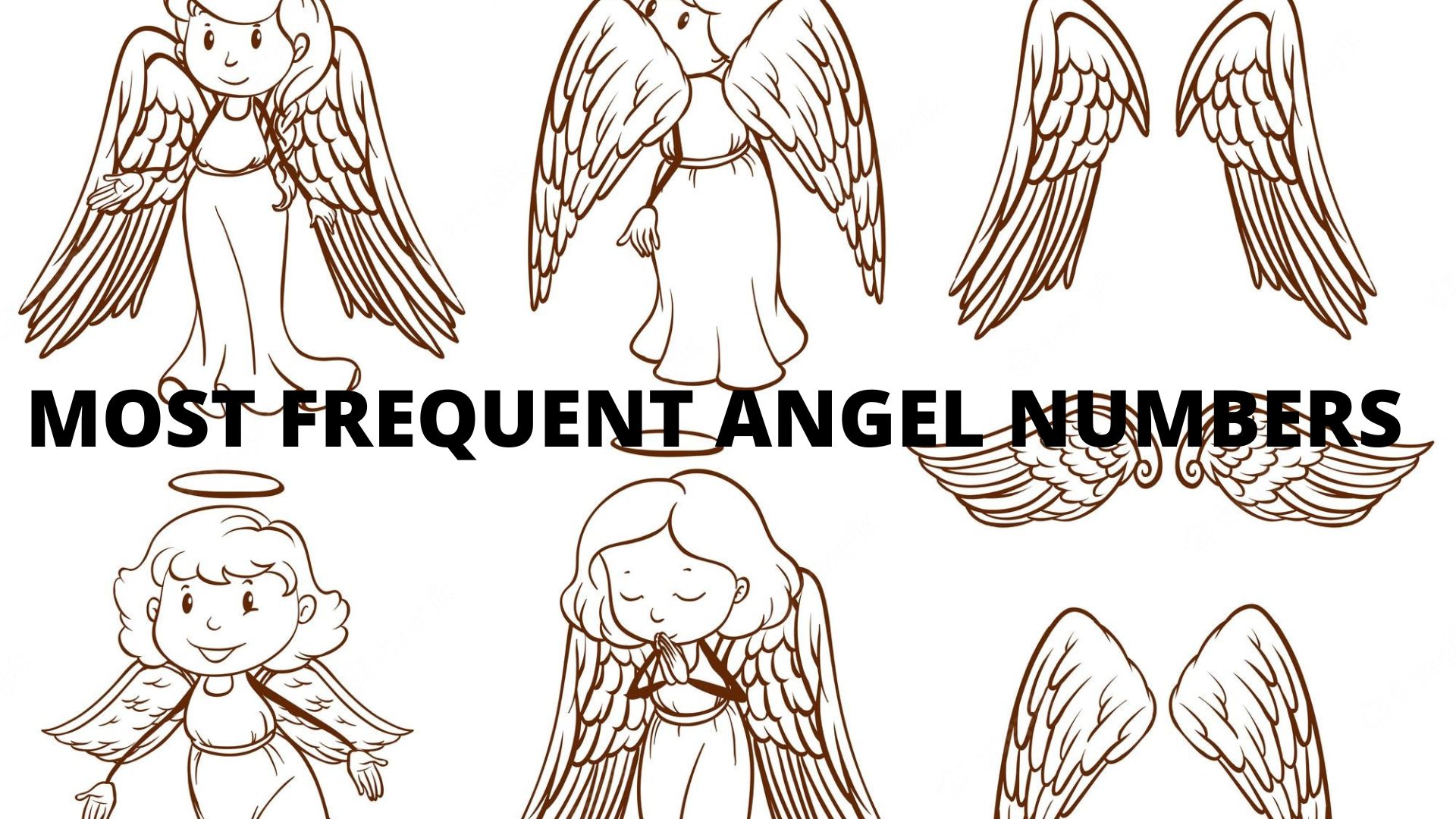 In numerology, most frequent angel numbers have their interpretation, but specific number sequences are more prevalent than others. We have all seen three-digit angel numbers, so it makes sense to think they are familiar.

When you keep stumbling over these numbers, it is a message from the angels telling you to pay attention to what they have to say.

What Are Angel Numbers In General?

The entire universe is based on numbers. Numerologists have understood this for centuries. Angel numbers are numbers that are intended to get a divine message to you to help you through troubling times or give you an acknowledgment that you are on the correct path.

They often appear in moments of doubt or when you are confused as to what will happen next and what choices you should make.

Our angels have long used various means to try to communicate with us. They may send a particular song, enter your dreams, send feathers or coins, or play with electric lights.

Numbers are a great way to help with this kind of communication because they are so common and have their own vibration. That is, as long as we are willing to take note and try to understand what is being said.

There are both universal angel numbers and personal ones (more on that difference below). When you begin to notice a particular sequence, take time to concentrate on what you are thinking and feeling at the moment.

Why Are Angel Numbers Unique?

Angel numbers are distinct from other esoteric activities in part because they are unrelated to your date of birth.

Angel numbers are not based on your birth date, time, or place, unlike zodiac signs, astrological birth charts, or even the numerology life path number calculation.

While the characteristics of your zodiac sign can provide you with insight into your likes, dislikes, interests, and tastes, angel numbers don't reveal who you are personally; rather, they reveal how you interact with the world.

The most important thing is that you're paying attention; there is no hierarchy in how you discover this mystical signature (i.e., a long-term relationship isn't more meaningful than a one-time observation).

Of course, numerology is also arbitrary, much like everything else in the metaphysical world (such as astrology, tarot, palm reading, etc.).

The fact that all metaphysical traditions now place a strong emphasis on agency, free will, and autonomy is one of my favorite aspects of being a practitioner.

Resources shouldn't be directive but rather provide context; as you study more, you'll feel more at ease developing your own opinions, impressions, and interpretations.

Don't be scared to dig into your truths as you strengthen your relationship with spirituality, since how you perceive and experience mysticism is unique to your world.

Enjoy that there is a meaning behind each angel number. The number "333" could be interpreted as confirmation of one's intuition by another person.

When you come across an angel number, pause for a moment and jot down any ideas, thoughts, or impressions that come to mind. Doing so will allow you to form a unique connection with that angel number, which will make it easier for you to identify in the future.

Numerology assigns several interpretations to each number. When you connect with angel numbers, you'll be able to figure out patterns by looking at what the numbers mean spiritually.

Zero represents fresh possibilities. A new beginning may occur when you see zero in a series (whether it's a set of three, four, or a pattern).

You can construct anything you want since you are at the start of a whole new cycle. Don't be scared to make significant, audacious choices at this stage of your journey.

One is a potent manifestation figure. Enjoy the chance to make a wish, establish an intention, or plant a seed if you come across one as an angel number (in a set of three, four, or within a pattern), as this is thought to represent a "green light" from the cosmos.

You are getting amazing help from your angels, guides, or ancestors, so the present and the future are dynamically linked.

The two symbolize harmony, confidence, and agreement. Two consecutive occurrences (either in a set of three, four, or within a pattern) may indicate that a guide, whether from the spiritual or material world, is assisting you in achieving your goals.

Whether you see two, it could be a good idea to get in touch with your most reliable friend to see if divine cooperation is possible.

Magnetic inventiveness is indicated by the number three. Observing the number three as an angel (in a group of three, a pattern of four, or otherwise) may indicate that you have the chance to bring your special skills and abilities to a situation.

In addition, the presence of three suggests that you will discover more value and abundance in whatever circumstances you are navigating if you lean into your inner skills. Your creative expression is important!

The number four represents stability. When four appears as an angel number (in a group of three, four, or inside a pattern), it's a sign that you're developing a solid foundation and long-lasting infrastructure.

Never be embarrassed to ask for help or support while engaging with four, especially if you're doing lengthy assignments that call for specialized knowledge. Fundamentally, building trust is what will enable you to soar to new heights.

These changes might be taking place behind the scenes for the time being, which means that important decision-makers are still considering their options, but angel number five shows that you're headed in the correct direction.

Although some people may be afraid of the number six (particularly when it appears in a triplet) due to religious connections with the Devil or demon figures, angel numbers such as three, four, and six have a helpful, sympathetic, and empathetic attitude.

Six might serve as a gentle, much-needed reminder to be kind and understanding to yourself. Things might not always go as planned, but with angel number six on your side, you can choose how to view a circumstance while keeping in mind that everything occurs for a reason.

Both at the casino and in the world of angel numbers, seven is lucky! When seven appears as an angel number (in a group of three, four, or inside a pattern), it often portends good prosperity, particularly in terms of money.

Seven encourages you to venture out and investigate options outside your comfort zone because new financial opportunities can present themselves.

Integrating your spirituality with your values is the best way to use this energy because it can lead to rich, steady streams of income.

Eight is one of the holiest numbers in numerology, and seeing it as an angel number (in a set of three, four, or in a pattern) may show a strong connection to the spiritual world.

Eights may be seen by some who believe in the afterlife as a sign that they are getting supernatural support from departed loved ones. In essence, the number eight represents infinity, the never-ending cycle that transcends any one lifetime. Therefore, when this angel number occurs, don't be hesitant to follow your intuition.

Nine is the last digit in numerology, which indicates that a chapter may be concluding. When nine appears as an angel number, it may be a sign that a significant cycle is about to end and a new one is about to begin.

Similarly, it is a great moment to venture outside your comfort zone, broaden your horizons, and discover uncharted land. Whether you decide to start a new career or go back to school, the spiritual universe will help you make bold decisions.

Angel Number Signs To Continue Along The Path You're On

They are attempting to attract your attention, and the numbers that they transmit have significance associated with them. Think of it as a small sign that shows you're going in the right direction in life, like a road sign.

Angel numbers have gained popularity over the past few years along with the growing acceptance of spirituality.

Angel numbers, according to Novalee Wilder, a licensed numerologist, are a simple entry point into the world of spiritual pursuits. She adds that receiving signals from the spiritual realm is not something that can only be done by psychics.

"Each one of us is backed and assisted in whatever way possible by a spiritual team that is always there for us. One of the ways that they are successful is by utilizing numbers as a means of drawing our attention," she explains.

And, according to spiritual adviser and intuitive mentor Diana Zalucky, also known as The Empress Adviser, "people are realizing they are connected to the magic that exists all around them."

"People are discovering they are truly connected to the energy that resides all around them. Angel numbers are an invitation to create trust in your spiritual connection in a way that is compassionate and gentle," the author writes.

Below, numerology experts explain how to recognize angel numbers and interpret their significance, to assist you in developing a deeper understanding of this topic.

Where Can You Find Angel Numbers?

On clocks, timestamps, and alarms, angel numbers can be seen. They can be found on license plates, phone numbers, and addresses.

What Are The Most Frequent Angel Numbers?

What Are Angel Numbers?

Angel numbers are those that are meant to convey a divine message to you to either support you during trying times or to let you know that you are headed in the right direction.

Pay attention to most frequent angel numbers since they are a legitimate and often used form of spiritual direction. Don't become overly preoccupied with them or fixated on their significance, though, as they are only one possible method of receiving instruction.

Simply consider the repeated number patterns that show up in your life as reassuring, loving reminders from your angels or guides.