Map Projection- Why Have All Of The World Maps You've Seen Duped You? 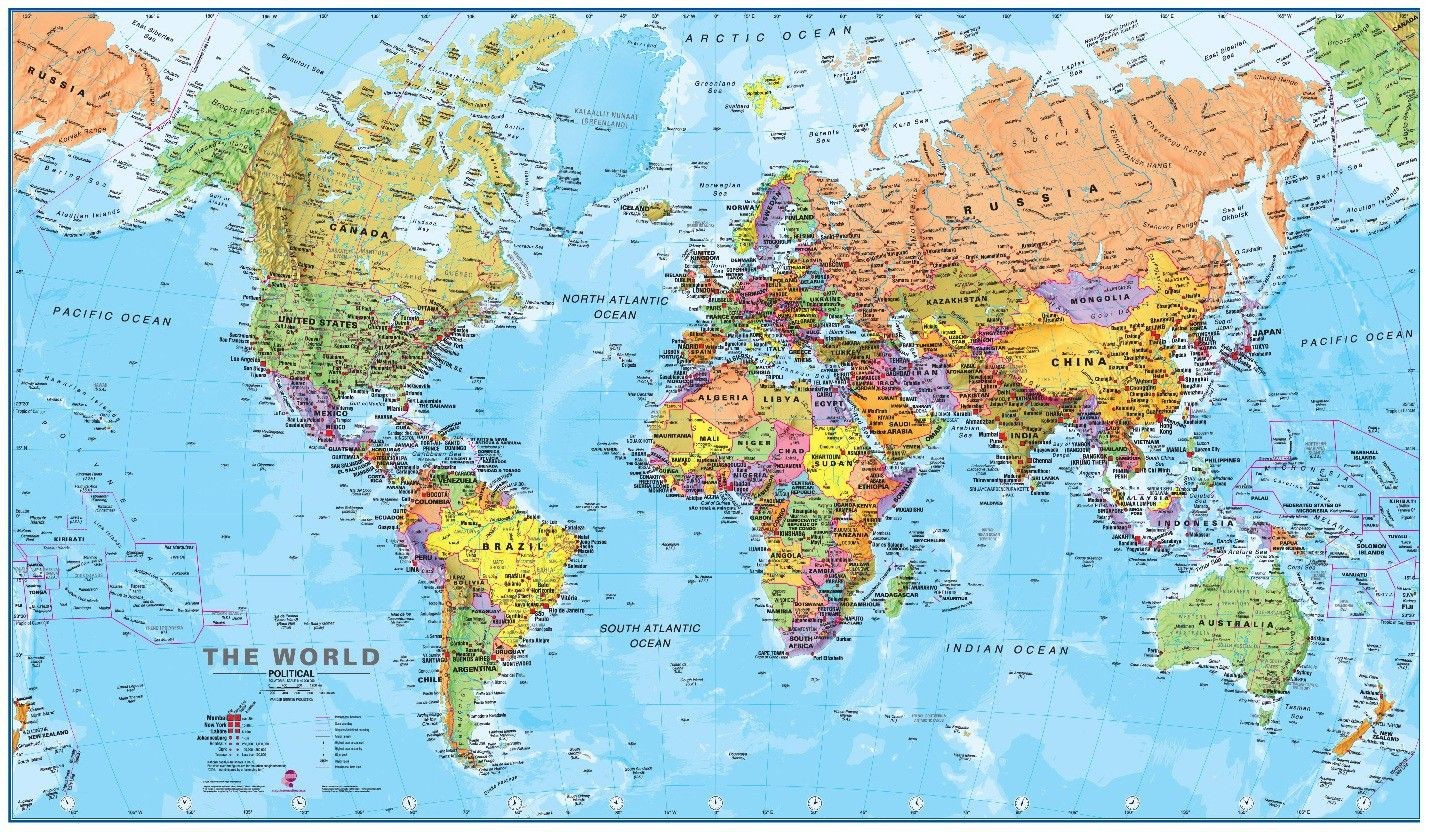 When explaining why a three-dimensional world cannot be represented in two dimensions without causing distortion, geographers frequently refer to the 'orange peel problem,' which is possibly the most widely-cited analogy available about map projection. You will not be able to flatten an orange peel without ripping, squashing, or stretching it no matter how hard you try. In the same way, when cartographers attempt to flatten the Earth for the purpose of creating a map projection, distortions in terms of form, distance, direction, and land area are certain to occur.

What Is Orange Peel Problem?

If you still don't know what is orange peel problem that geographers or teachers often use to describe map projection, here it is.

Consider the following scenario: you have an orange. This is the Earth that you have created in your imagination. Regardless matter the direction you look at it from, you will not be able to see all of its sides. It's only when you peel the orange and spread it out that you can start to see things clearly again.

Because it is impossible to depict three-dimensional surfaces correctly in two dimensions, distortions will always occur. Map projections, for example, distort distance, direction, scale, and area in different ways. Every projection has its own set of advantages and disadvantages. Overall, it is the cartographer's responsibility to select which projection is best appropriate for the task at hand.

What Is Meant By Map Projection?

In cartography, map projection is the procedure of moving the graticule of latitude and longitude on a plane surface to a different plane surface. Alternatively, it may be described as the translation of an equilateral spherical network of parallels and meridians into a planar surface. As you are aware, the world on which we live does not have a level surface. It has a geoid form, which is similar to that of a sphere. A globe is the most accurate representation of the world. The form and proportions of the continents and seas are appropriately depicted on the globe as a result of this attribute of the globe. The directions and distances are also displayed with great accuracy. The lines of latitude and longitude split the globe into numerous parts, which are then divided further.

The parallels of latitude and the meridians of longitude are represented by the horizontal lines, while the parallels of longitude are represented by the vertical lines. Graticule is the name given to the network of parallels and meridians. The creation of maps is made easier because of this network. The projection of the graticule onto a flat surface is the process of drawing the graticule.

Why Have All Of The World Maps You've Seen Duped You?

As Professor Matthew Edney of Geography and the history of mapping at the University of Southern Maine explained in an email to Live Science, "every globe map is warped in some way."

The distortion of a map is a phenomena that occurs when you are unable to see the entire picture at the same time. When compared to their real measurements on the curved surface of the earth, the misrepresentation of form, size, distance, or direction of or between geographic objects on a map or photograph is known as cartographic distortion.

Because it is impossible to depict three-dimensional surfaces correctly in two dimensions, distortions will always occur. Map projections, for example, distort distance, direction, scale, and area in different ways. Every projection has its own set of advantages and disadvantages. Overall, it is the cartographer's responsibility to select which projection is best appropriate for the task at hand.

"It all comes down to what you want," he explained. "Do you want the areas to be formed like they are on a globe, or do you want them to be the same size as they would be on a globe? Although the latter is far more suited for most purposes, the aesthetic of the former is nonetheless culturally dominant."

Even though flat-Earthers claim otherwise, our globe is not flat; it is rather an oblate spheroid, which is a sphere with flattened top and bottom surfaces, as well as an indentation running parallel to the equator.

It was a surprise half a millennium ago when the Flemish geographer and mapper Gerardus Mercator devised the Mercator projection, which is still the most generally used flat portrayal of the Earth, according to MapHover. Navigators have long used this map because it allows them to draw paths in a straight line, which is very useful when sailing.

What Is Wrong With Mercator Projection? 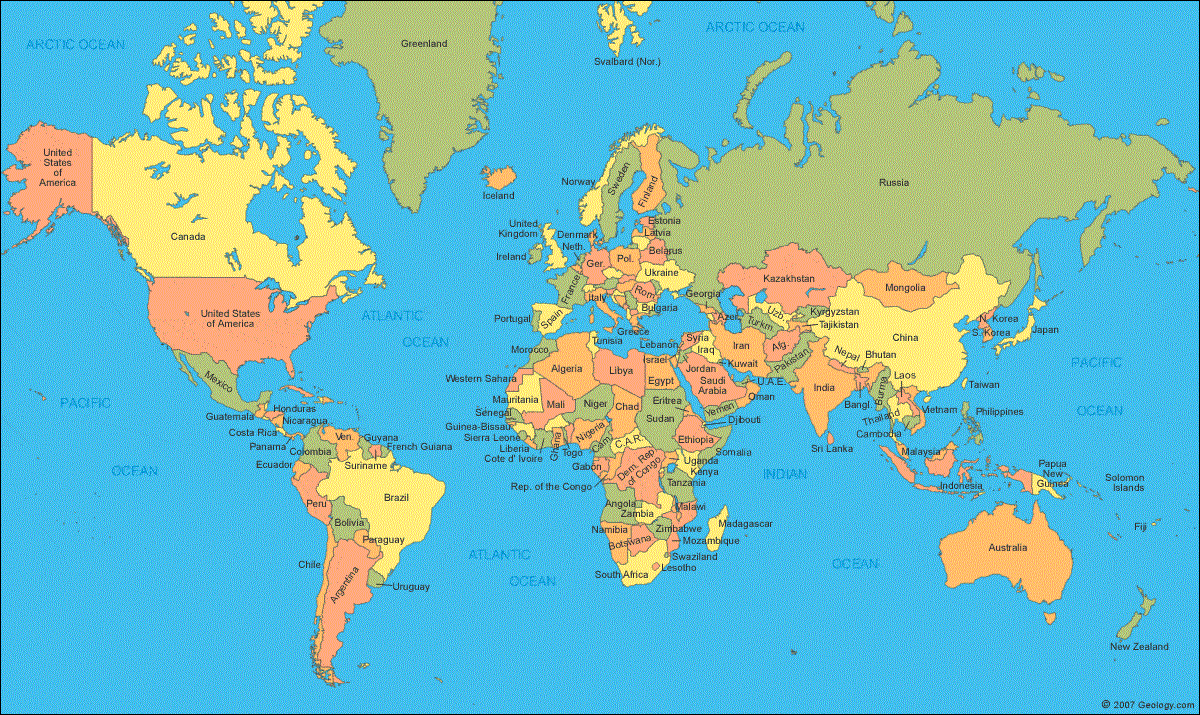 Gerardus Mercator, the famous geographer of the sixteenth century, made a breakthrough new map based on a cylindrical projection in 1569. Because every line on the sphere represents a consistent route or loxodrome, the new map was particularly well adapted for naval navigation. This is particularly beneficial in current times since the Earth can be shown in a continuous manner in online mapping tools, which is extremely valuable.

It has been 448 years since the world's most widely used map projection became widely available. It was developed in 1569 by the Flemish mapper Gerardus Mercator, at a time when Antarctica had not yet been found. A nautical navigational aid, the Mercator projection was created for sailors because it was the most convenient to hand-plot routes using parallel rules and triangles on this map.

To be absolutely honest, it is a useful map in many ways. There are no curved lines connecting the latitudes and longitudes; the latitudes and longitudes are straight lines that cross perpendicularly; the rectangular form is convenient and compact for printing, and the shapes of the nations are clearly delineated. However, the one thing that this map does not accurately depict is the relative sizes of the countries on the continents. In popular culture, nations near the poles are depicted as being far larger than they actually are.

Is Africa Bigger Than North America? 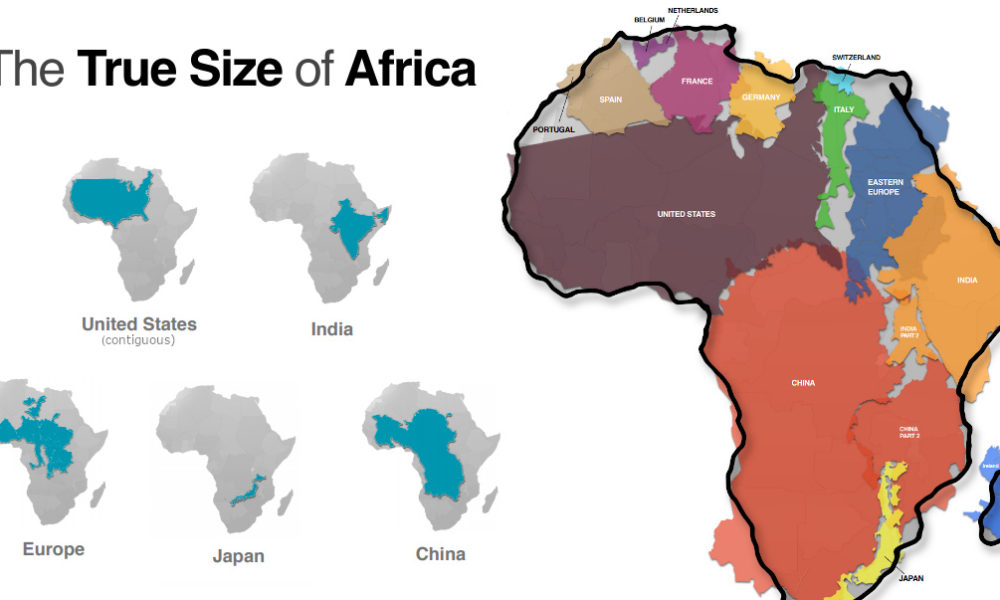 Comparison of the size of Africa to US, India, Europe, Japan, and China

Let's start with the elephant in the room, the problem with Africa. In actuality, Africa is a massive continent! It is 1.23 times the size of North America, despite the fact that North America seems to be larger on the Mercator Map of the world. In Africa, you can cram in the United States, India, Europe, and China while still leaving room for Liberia and Japan. 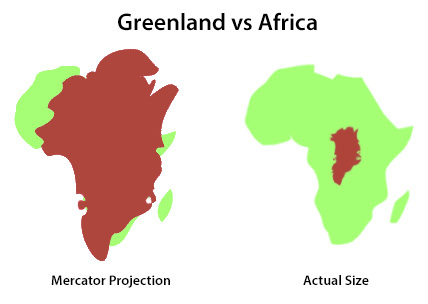 Then there's the matter of Greenland, which has to be addressed. Greenland's ratio is significantly out of whack. Although it seems to be as large as Africa on the Mercator map, it is actually just 1/14th the area of Africa! Greenland is a little island compared to the vastness of Africa. It is even more insignificant than the Democratic Republic of the Congo, being just one of Africa's 54 countries. Greenland is so inaccurately shown on the Mercator map that cartographers refer to it as the 'Greenland Problem' because of its massive distortion.

Similarly, India looks to be far smaller than it actually is. Actually, it is three times larger than Scandinavian nations, which explains why it has the second-largest population in the world, after only the United States.

Also insignificant when measured against Brazil, Alaska is five times smaller than the South American colossus, and even Mexico is greater in terms of land area than Alaska. Antarctica is typically depicted as a massive continent at the bottom of maps, but how large is it in reality? If you want to have a better understanding of our map, you can try utilizing The True Size, an interactive map project created by James Talmage and Damon Maneice. It allows you to get a sense of just how big countries actually are.

It was never meant to be used as the default wall map in schools throughout the world, yet it has had a profound impact on the worldviews of millions of people around the world. Some critics of the map—and similar projections—believe that the distortion serves to foster a sense of imperialist superiority among the viewership. Furthermore, the amount of area a country occupies is frequently connected with its level of power and access to natural resources, thus map distortions can have the unintended consequence of undermining countries located closer to the equator by distorting their geographic position.

When attempting to find a feature on the Earth's spheroid surface, spatial reference systems (latitude and longitude) are employed. Latitudes and longitudes may be used to pinpoint the position of any point on the planet's surface. There are angular units such as degrees, minutes, and seconds that are used to denote these points.

When you transfer a spherical shape to a flat surface, on the other hand, you get something that is close to the real shape of the Earth. In some map projections, the distance between features on a map is kept but distortion is made to the form of the map. This is dependent on the map projection that you pick. While the region may be kept, the direction may be skewed in some instances. Cartographers select map projections that are appropriate for the purpose, size, and form of the region of interest on the map being depicted on the map.