Lunar New Year - The Festivities, The Fireworks, The Fluffy Rabbit

While nations across the globe already celebrated the coming of 2023, some parts of the world just recently geared up for the Lunar New Year.

Considering the sheer number of celebrators alone, China, the world’s most populous country - over 1.4 billion as of this writing - seemingly led the merriments last January 22nd.

Picture these things in your mind:

The exquisite Chinese calligraphy adorning the lanterns and bright red envelopes. The vibrant dragon dance and lion dance. The illuminating fireworks display, not to mention the noisy but fun firecrackers.

How can anyone miss the Lunar New Year, with its animated celebration going beyond the Great Wall of China?

Not even China, which also happens to be the world’s second largest country, can contain the annual Lunar New Year celebration.

Its observance and revelry have long reached the shores of its Asian neighbors near and far:

If a western calendar serves as a reference, according to Encyclopedia Britannica, Lunar New Year typically falls between January 21 and February 20.

This 2023, January 22 marks the date of this extra special occasion.

Despite the difference in the length of celebration, nationalities who observe the Lunar New Year commonly do the following as part of the general festivities:

Jordan Sully, the owner of the site ThaiGuider, wrote about how the Thai people celebrate it for three days, with the first day (Wan Jaai) being a shopping day.

The second day (Wan Wai) is when they offer food and prayers to their deities and demised relatives. On the last day (Wan Tiao), they visit their grandparents and other elderly relatives.

It’s also a 3-day celebration in South Korea; in Tibet, five days. Still, with all the celebrations, the Lunar New Year is not a public holiday in Thailand and Cambodia.

In Singapore, according to the travel guidebook Frommer’s, since 1987, people would partake in the River Hongbao revelries. The celebration has since become nine days long.

A lion dance amidst firecrackers; a Chinese elderly man placing red candles inside a temple

These two festivals are the same in the sense that they both celebrate the dawn of a new year.

The more general term “Lunar New Year” pertains to the kind of festivity - similar in essence to that of the Chinese New Year - that is celebrated in other countries and by other nationalities.

In China, the Chinese New Year, also called Spring Festival (Chunjie), is celebrated at the beginning of the winter solstice or dongzhi (typically January 21) until the start of spring or ichun (usually February 20).

According to Britannica, the Chinese government started implementing the 7-day holiday in the ‘90s.

The Chinese New Year is also referred to as the Lunar New Year. Below is a simple explanation:

The holiday is sometimes called the Lunar New Year because the dates of celebration follow the phases of the moon.

- The Editors of Encyclopaedia Britannica

It starts with the new moon and concludes with the appearance of the next full moon.

A Chinese legend points to a violent man-eating mythical creature called nian being the root cause of this local-turned-global celebration. In Mandarin, according to the South China Morning Post, “nian” sounds like “year.”

As the folklore goes, every new year, the nian would wreak havoc on villages and devour anyone, including animals.

What a despicable being this nian is, right? Imagine, starting the year in chaos? Good thing there are four things that can terrify it. Guess what? Per Britannica:

Now you have an idea why the Chinese New Year, aka Lunar New Year, celebration is noisy (the firecrackers, the music, the drumbeat) and bright (rows upon rows of lanterns), with most things in vivid red.

Below is a table of how the celebration in China proceeds and ends, according to Chinesenewyear.net via Al Jazeera:

The traditions practiced during the Lunar New Year basically aim on driving away bad or evil spirits and attracting good fortune and prosperity.

One common gesture is the traditional giving of money placed inside a red envelope to children.

Others would be the lion dance and the dragon dance, performed to usher fortune and blessing.

During a specific hour on the third day of celebration, Tibetan people would place prayer flags on rooftops for a bountiful harvest. On the first day, for good luck, women would wake up earlier than usual to fetch water from a river.

On the final day of their Lunar New Year, the Chinese hold the Lantern Festival (Yuan Xiao Festival). They parade the streets carrying lanterns. Others hang them on temples.

The Chinese would likewise put bamboo plants and pussy willows inside the house for good luck as well as small round fruits particularly oranges and kumquats (tangerines) on the dining table to attract wealth. 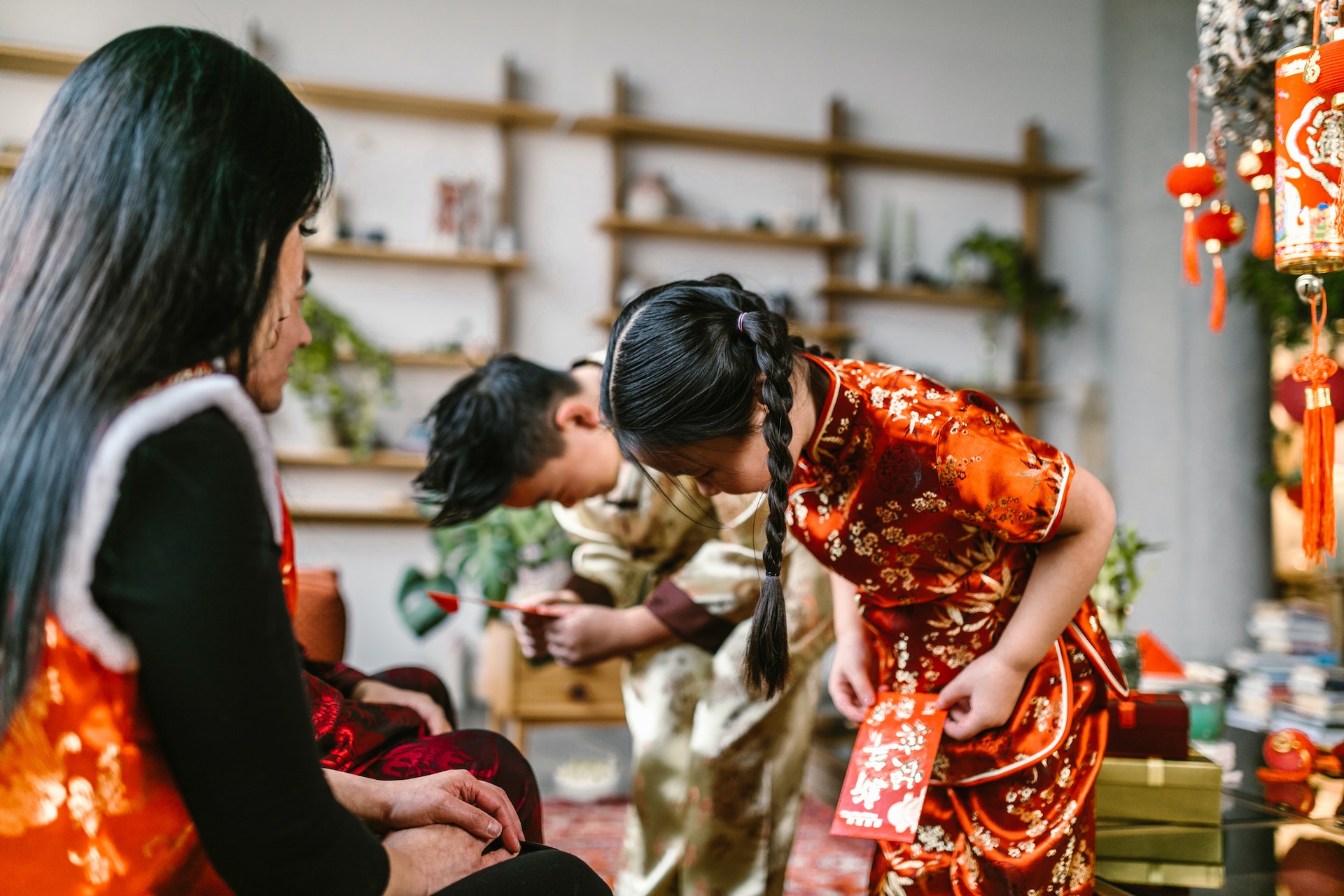 The things, including foods, normally seen during the Lunar New Year carry with them different symbolism:

What’s a Lunar New Year without the bountiful, sumptuous food? Never celebrate with an empty stomach!

Below are some of the traditional Lunar New Year food prepared and served in different countries:

This is the Year of the Rabbit.

The Chinese zodiac sign rabbit dominates the Lunar New Year 2023. They are the people born in these years:

In a Seventeen interview, as reported by CNET, Dottie Li, a cross-cultural communications strategist, shared what people could anticipate this 2023:

Because of the rabbit’s characteristics, we can expect relaxation, fluidity, quietness, and contemplation.

This Lunar New Year 2023, avoid getting jealous and entertaining too many pessimistic thoughts.

What Does The Lunar New Year Represent?

The Lunar New Year fundamentally denotes the beginning of new life and a renewed appreciation of family ties.

Why Is Red Lucky For Lunar New Year?

Aside from the belief that red can drive back the evil nian, for the Chinese, this color stands for happiness, prosperity, and good fortune.

What Colors Should You Avoid Wearing During Lunar New Year?

The colors to be avoided are black and white because they are typically worn on wakes and funerals.

It looks like technology will always find its way to century-old traditions, not even sparing the ones observed during the Lunar New Year.

For example, those Chinese who were unable to give red envelopes personally did it electronically via WeChat, China’s own instant messaging platform, which also works as a mobile payment app.

Indeed, not even distance can stop people from celebrating the Lunar New Year - and sending good luck money to the little ones.