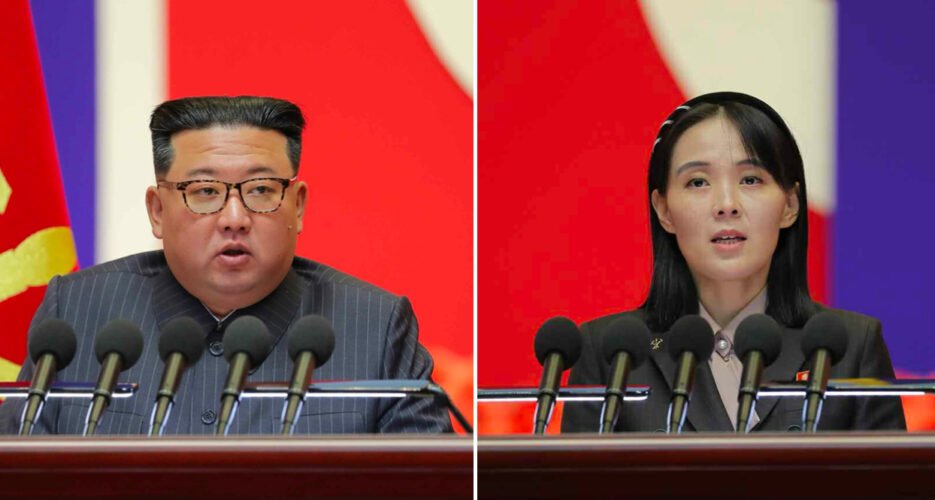 Kim Jong Un's sister said that he had a "high fever" during a recent Covid outbreak. She also threatened to "eradicate" South Korean authorities if they didn't stop allowing propaganda leaflets that the regime says had spread the virus.

Kim Yo Jong blamed "South Korean puppets" for sending "dirty objects" across the border in leaflets that were carried by balloons, the official Korean Central News Agency reported Thursday.

Kim Yo Jong kept saying that the pamphlets were to blame for the recent Covid outbreak in the north.

The fact that her brother was sick was a rare admission from the regime, which rarely talks about the leader's health and only then to show that he understands the problems of the people.

According to KCNA, Kim Yo Jong said in a speech that the North Korean leader was "seriously ill" when he had a fever.

Still, she said that her brother "could not lie down for even a moment because of his concerns for the people." She didn't say if the elder Kim was one of the people North Korea calls "fever cases" or when he got sick.

Kim Jong Un is overweight and smokes, so people have been wondering about his health for years.

Since his family has a history of heart disease, his public appearances are closely watched to learn more about Pyongyang's secretive and autocratic government.

However, the North Korean leader often goes out of sight in the summer to spend time at his mansion and megayacht near the water. He went to a meeting of the ruling party on Wednesday, where he said that the "great quarantine war" was won.

North Korea hasn't called the tens of thousands of fever cases it has reported "Covid." This could be because it doesn't have enough test kits.

Reports say that planned shipments have been put on hold because the country doesn't like the rules from Covax, an organization backed by the World Health Organization.

Kim Jong Un made public comments about South Korea, and his sister made her first threat against South Korean President Yoon Suk Yeol's government since it took office in May.

In a speech, she said, "If the enemy continues to do such a dangerous thing that can introduce virus into our republic, we will respond by eradicating not only the virus but also the South Korean authorities."

The South Korean Ministry for Unification said its "strong regret" about what Kim Yo Jong said and called her claims "rude" and not true.

The way North Korea talks about Seoul is getting worse, which could lead to a return of military provocations that have slowed down in recent months, possibly because of the outbreak.

Government officials from Japan, South Korea, and the US say that North Korea seems to be getting ready to do its first nuclear test since 2017

Any show of Kim's nuclear weapons would be a reminder of the serious security problems that have been building up while US President Joe Biden's administration has been focused on Russia's invasion of Ukraine.

There are many ways the virus could have made its way into North Korea. During the pandemic, most airports have been closed.

However, in January, the regime reopened a rail link with China, and black-market traders often cross the border.

A UN group said that satellite images show sea traffic at Nampho, which is the country's main international port, and that illegal trade is taking place on the open seas, which is against the rules.

North Korea is one of only two UN members that hasn't started a vaccination program. Its leader may be trying to avoid blame for an outbreak that was too big to ignore.

The government says that "alien things" sent across the border by balloons from the south brought the coronavirus into its territory. Health experts and the South Korean government say that this type of transmission has never happened before.

"It is quite natural for us to consider strange objects as vehicles of the malignant pandemic disease," Kim Yo Jong said. She also said that her brother led an "epoch-making miracle" that got rid of the virus.

Since the 1990s, activist groups led by North Korean defectors have been sending millions of anti-Pyongyang leaflets by balloon from South Korea. Kim's regime often uses these leaflets when it wants to make things worse.

In the summer of 2020, North Korea complained about similar leaflets, which led to the country blowing up an inter-Korean liaison office on its side of the border. Kim Yo Jong was also one of the main people criticizing the government of former President Moon Jae-in at the time.

Yang Moo-jin, a professor at the University of North Korean Studies in Seoul who has advised the South Korean government, said that by claiming victory, North Korea may be "paving its way to resume its trade with China."