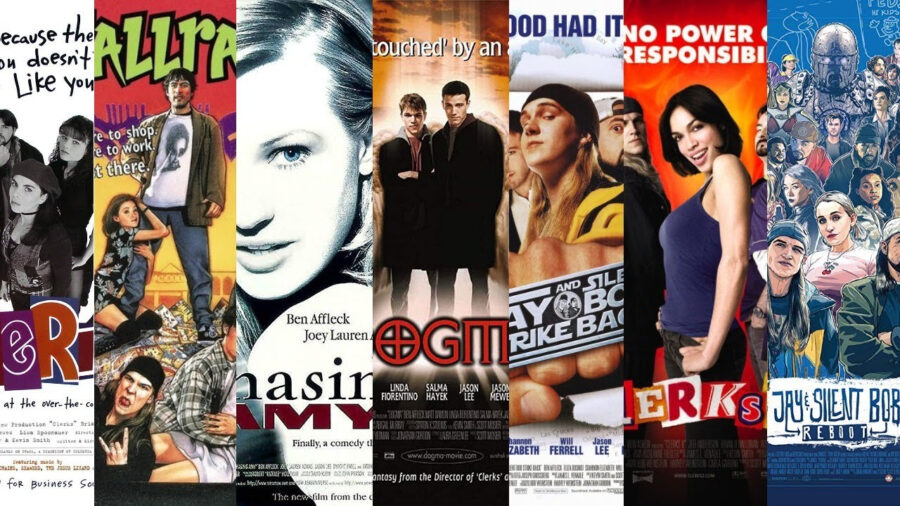 Kevin Patrick Smith is an actor, comedian, comic book writer, novelist, and podcaster from the United States. He rose to fame as the character Silent Bob, of the stoner duo Jay and Silent Bob, in the low-budget comedy picture Clerks (1994), which he wrote, directed, co-produced, and starred in.

Jay and Silent Bob are also featured in Smith's subsequent films, including Mallrats, Chasing Amy, Dogma, Jay and Silent Bob Strike Back, Clerks II, and Jay and Silent Bob Reboot, all of which are set in New Jersey. While the films are not exactly chronological, they do share narrative themes, character allusions, and a common canon known as the "View Askewniverse," which is named after Smith's production business, which he co-founded with Scott Mosier.

Since 2011, Smith has mostly focused on horror films, including Red State (2011) and the "comedy horror" flicks Tusk (2014) and Yoga Hosers (2016), two of three planned True North trilogy films set in Canada. He's also worked as a director-for-hire on projects he didn't create, such as the buddy police action comedy Cop Out (2010) and episodes of different television shows.

Smith is the proprietor of Jay and Silent Bob's Secret Stash in Red Bank, New Jersey, which served as the location for the reality television program Comic Book Men (2012–2018). He also presents the movie review program Spoilers on television.

Smith co-hosts a number of programs on his SModcast Podcast Network, including SModcast, Fatman Beyond, and the live event Hollywood Babble-On, as a podcaster. Beginning with An Evening with Kevin Smith, he is renowned for engaging in lengthy, hilarious Q&A sessions that are often recorded for DVD release.

Kevin Smith wrote, produced, and directed Clerks, a black-and-white buddy comedy film released in 1994. The movie stars Brian O'Halloran and Jeff Anderson and depicts a day in the life of eponymous shop employees Dante Hicks (O'Halloran) and Randal Graves (Anderson), as well as their friends.

The first film in Smith's View Askewniverse series, Clerks, features many recurring characters, including Jay and Silent Bob (Jason Mewes and Smith). Clerks were shot for $27,575 at the convenience and video stores where director Smith works in real life. The picture got generally favorable reviews upon its theatrical debut and earned over $3 million in cinemas, starting Smith's career.

The film is regarded as a watershed moment in independent cinema, and the Library of Congress chose it for preservation in the National Film Registry in 2019, deeming it "culturally, historically, or aesthetically important."

Director Kevin Smith made his prior imprint on Generation X society with the funny, inspired Clerks, which was one of 1995's success stories despite its black-and-white status and $27,000 budget tag. After their girlfriends leave them, slackers Brodie (Lee) and TS (London) seek refuge at the only place they can think of: the local mall.

Once inside, they have a series of experiences that would put even the most seasoned shopper to shame, from meeting Marvel comics creator Stan Lee to thoroughly annoying the chainstore suit who has kidnapped Brodie's ex (Doherty), culminating in their attempts to reclaim their loved ones by vandalizing a live gameshow broadcast.

Rather than a continuous barrage of chuckles, this is a film of individually inspired moments. While there are brilliant moments of irreverence and filth — one man's day-long struggle to make sense of a Magic Eye drawing; the return of Clerks dropouts Jay and Silent Bob (Smith); a cripplingly funny opening monologue — Smith's comic book-obsessed loser protagonists slide giddily about the mall from one mishap to the next.

The last reel also misses its way in, resulting in a terribly clichéd conclusion. Perhaps not for everyone, but fans of Clerks and those who like their stupid humor with a little heat will not be disappointed.

A short clip from an early film by a friend of Smith's served as the inspiration for the picture. One of the lesbian characters in Guinevere Turner's Go Fish imagines her friends condemning her for "selling out" by sleeping with a guy.

Smith was dating Adams at the time he was writing the screenplay, and she had a big influence on it. The film got generally good reviews, with praise for its wit, acting, and directing by Kevin Smith. The film was nominated for two Independent Spirit Awards in 1998. (Best Screenplay for Smith and Best Supporting Actor for Lee).

Will re-evaluates his relationships with his closest buddy (Affleck), his girlfriend, and himself throughout his therapy sessions, tackling the difficult job of addressing his past and thinking about his future.

The film got excellent reviews from reviewers and made more than $225 million in theaters on a budget of $10 million. It was nominated for nine Academy Awards, including Best Picture and Best Director, and won two: Best Supporting Actor for Williams and Best Original Screenplay for Affleck and Damon at the 70th Academy Awards. It was rated 53rd on The Hollywood Reporter's "100 Favorite Films" list in 2014.

Bam Margera and Brandon DiCamillo, as well as other residents of West Chester, Pennsylvania, created the CKY video series. "Camp Kill Yourself" is abbreviated as "CKY." The series laid the groundwork for what would later become Jackass.

Bam Margera, Brandon DiCamillo, their friends, and Margera's family execute different stunts and pranks in the films, which are mixed with skate footage of Margera and other pro skateboarders. They would walk out to a field during class and film sketches, which would later be combined into the CKY series. Margera said in a 2002 interview that the series had sold over 400,000 copies.

Producer Joe Frantz stated in 2018 that he had started remastering all four videos for an upcoming HD release. They were published on the now-defunct streaming service DCTV in 2019. Uncut.remastered, a second remaster effort for the series, was revealed by producer Zera Starcat in 2021.

The plot centers on two fallen angels who intend to use an apparent loophole in Catholic theology to return to Heaven after being thrown out by God, but their success would show God incorrect, destroying all creation.

The seraph Metatron sends the final scion and two prophets to stop them.It was labeled blasphemous by the Catholic League. In several places, organized demonstrations delayed its publication, and Smith received at least two death threats.

It was the third movie in the Scream franchise, and it was supposed to be the last chapter until the brand was resurrected in 2011 with Scream 4. The film picks up three years after the events of the previous two films, and follows Sidney Prescott (Campbell), who has gone into self-imposed exile following the events of the previous two films, but is drawn back to Hollywood when a new Ghost face begins murdering the cast of Stab 3, a film within a film.

Scream 3 satirizes the cliché of cinema trilogies by combining slasher violence with humor and a "whodunit" mystery. In contrast to earlier Scream films, this one placed a greater focus on comic aspects, and the violence and terror were toned down in reaction to increasing public scrutiny of media violence in the aftermath of the Columbine High School tragedy.

When selling his original screenplay, Scream author Kevin Williamson included a five-page blueprint for two sequels, hoping to attract buyers with the promise of a franchise. Due to his obligations to other projects, Williamson was unable to finish a full screenplay for Scream 3, so Kruger took up the writing responsibilities, discarding many of Williamson's ideas. The film was shot between July and September 1999, with the conclusion re-shot in January 2000.

Scream 3 debuted in Westwood, California on February 3, 2000, and was released in theaters the next day, earning $161 million worldwide on a $40 million budget. On Rotten Tomatoes, Scream 3 has a 40% approval rating, compared to 79 percent and 82 percent for the previous two films.

Kevin Smith's Jay and Silent Bob Strike Back is a 2001 American buddy comedy film written and directed by him. It is the fifth installment in his View Askewniverse, a growing collection of characters and locations based on his cult classic Clerks.

It centers around the two titular protagonists, portrayed by Jason Mewes and Smith, respectively. Jason Lee, Ben Affleck, Joey Lauren Adams, and Shannen Doherty, among others, make cameo cameos in the film. Jay and Silent Bob Strike Back's title and logo are obvious allusions to The Empire Strikes Back.

Strike Back includes numerous characters from the previous Askew films, some in multiple roles and repeating roles from earlier entries, and was originally meant to be the last film set in the Askewniverse or to feature Jay and Silent Bob.

The picture was a modest financial success, earning $33.8 million worldwide on a budget of $22 million, and garnered mixed critical reviews. Smith stated in February 2017 that he was creating sequel to Jay and Silent Bob, which began shooting in February 2019 and was released on October 15 of that year.

The Tonight Show debuted the short film on February 27, 2002, and it was the first commissioned for the show. It's also included on the Clerks X 10th Anniversary DVD. Kevin Smith provides an introduction to the DVD version, which has been restored.

The film tells the story of Vulgar, a clown who first appeared in the View Askew Productions logo. Though not a Kevin Smith film, it features several actors who have previously appeared in other View Askew Productions, including Brian O'Halloran as the main character, Smith as a gay TV executive, Ethan Suplee as one of the antagonists, Jason Mewes as a car wash employee, and writer/director Bryan Johnson as Syd. In 2016, Johnson revealed his intentions to make a sequel to Vulgar.