Jesse Stone Movies Collection With Storyline: A Series Of Films Based On Detective Novels By Robert B. Parker 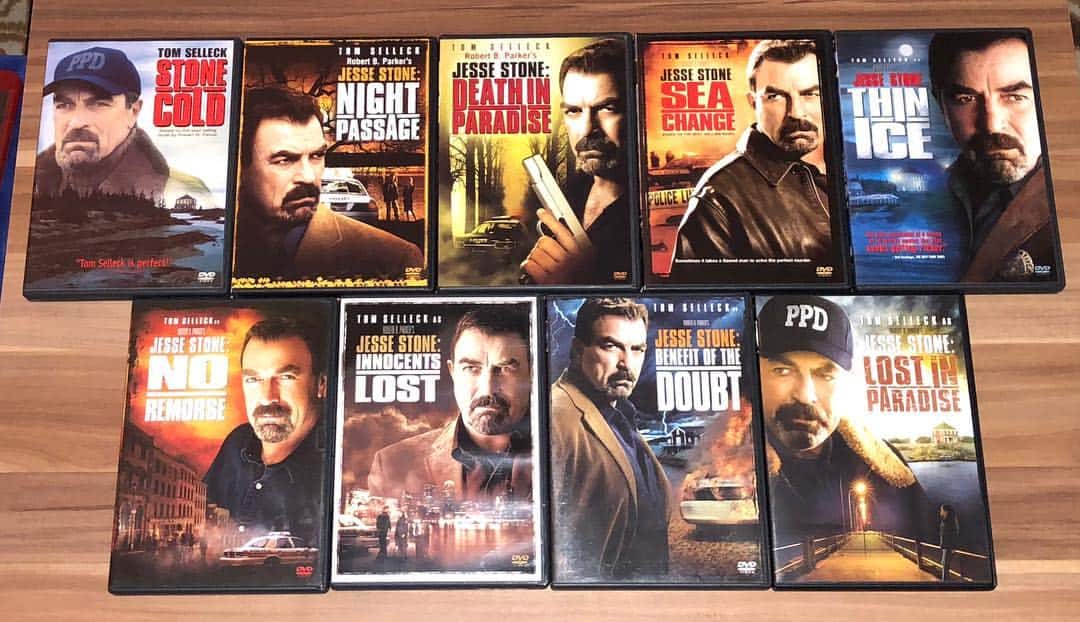 Michael Brandman was the first to continue the series. Reed Farrel Coleman took over as the series' writer in April 2014. Nine TV movies have been made based on the books. CBS commissioned the first eight films, which aired from 2005 to 2012. The Hallmark Channel took up a ninth film, which premiered on October 18, 2015. The production of a tenth film is underway.

At the start of the series, the character is about 35 years old. He was a minor league baseball shortstop who had his career cut short due to a shoulder injury. He was born in Arizona and reared in California. Because of a drinking problem that started following his divorce from his beautiful wife, Jennifer, he was asked to quit his position as a murder investigator with the LAPD Robbery-Homicide Division.

Stone gets appointed as the police chief of the tiny town of Paradise, Massachusetts (loosely modeled on the actual town of Marblehead, Massachusetts) after showing up intoxicated to an interview for the position. Stone soon realizes that the town has major crimes, is battling the mafia, has outrageously wayward spouses, and is dealing with a triple murder, and that his work would be more difficult than he anticipated.

But he rises to the occasion, starting by filing a corruption complaint against the town council president and detaining him. Stone usually carries a.38 Special snub-nosed revolver in the books, the same weapon he used as an LAPD detective.

Stone's cases as chief of the Paradise Police Department are chronicled in the series, as are his problems with alcohol and his complex relationship with his ex-wife Jenn. The police officers in the local police department respect and admire him. Captain Healy, the State Police Homicide Commander, establishes a strong working connection and friendship with him.

Jesse Stone, a profoundly disturbed guy, was an unusual character for the author. "Jesse is a much more wounded person who is coming to grips with himself as he goes along," Parker said, comparing Stone to Spenser, the protagonist of his first series and the one for which he was best known. There is considerable character overlap with the Spenser novels, particularly with Healy and Sunny Randall, and indirectly with Susan Silverman (in Night and Day).

The film begins with Stone being divorced and dismissed from his position as a murder investigator with the Los Angeles Police Department. Jesse Stone then travels to several locations until settling in Paradise, a tiny village in New England.

He takes a job as a chief police officer in Paradise, but Stone notices something odd about the community almost once. He begins his day by examining just the domestic abuse case, which leads to a money-laundering plot involving the State Bank management.

Officials in the village do all they can to keep Jesse from digging out secrets about the community, but he is committed to his work.

Jesse Stone is a former homicide investigator who takes a job as the chief police officer in the tiny town of Paradise, where he quickly discovers a string of killings.

Jesse Stone begins to experiment with women and scotch, both of which are unsuitable for him, but he feels compelled to do so in order to solve murder riddles across the city.

Jesse Stone's relationship with his wife deteriorates further, and as a consequence, he begins to drink more heavily. He chooses to revisit the cold cases of Paradise town to divert himself from his terrible habit.

Jesse Stone is assigned to a cold case involving the murder of a bank teller who was shot during a robbery. Moreover, Jesse Stone clashes with the town council over a rape case, which threatens Paradise's image as a premier beach resort.

Jesse Stone is shot alongside his partner, Captain Healy while moonlighting in Boston, and his hunt for the perpetrator takes him to the bed of a beautiful Boston Pd investigator.

Meanwhile, he receives a letter from a grieving mother informing him that his child has been stolen and is still alive and well in Paradise. Jesse reopens the case and begins his research in the hopes of finding the kid and discovering the truth.

Jesse Stone begins working in Boston with his colleague and buddy, State Homicide Commander Healy, after being suspended from the police department by the Town Council of Paradise, Massachusetts.

He battles his addiction to women and drinks. He begins to put in long hours and solve a string of murder cases in Boston, until one of his investigations leads to renowned mafia leader Gino Fish, worsening his position.

The corpse of a teenage girl is discovered floating in the lake by Paradise police. Following the removal of her body from the water, Jesse Stone begins his investigation and discovers that the case was originally about domestic violence but quickly escalated into a fatal murder.

Jesse Stone is motivated to address the problem while also battling alcoholism in his ex-memory.

Jesse Stone reclaims his job and joins the Paradise Police Department. Everything seemed to be returning to normal in his life until he heard about Cindy van Aldan's death, whom he believed to be his daughter.

According to the first inquiry, she died of a drug overdose and was also engaged in prostitution, but Jesse Stone finds this hard to believe. The case is personal to Jesse Stone, and he is determined to find out the truth no matter what it takes.

Jesse Stone: Benefit Of The Doubt 2012

Carter Hansen, the current town council president, appoints his son-in-law, William Butler, as head of police, but William Butler is killed when his vehicle explodes. Jesse Stone reclaims his job as chief of police after Butler's death.

Jesse Stone begins working on Williams' case and discovers that he was engaged in corruption at first, but eventually discovers a clue that may lead him to the true perpetrator. He blends in with his colleagues and gets to work on the case.

The town of Paradise seems to be calm and peaceful under Jesse Stone's leadership as head of police. To alleviate boredom and loneliness, he accepted an unpaid consulting position with the Massachusetts State Police Homicide Unit.

He begins working for Lt. Sydney Greenstreet, who is pleased by his efforts and assigns him to a case involving a serial murderer who has murdered four people in the area.

In What Order Should You Watch The Jesse Stone Movies?

CBS (and subsequently Hallmark) released nine Jesse Stone films between 2005 and 2015. The films, which were based on the Jesse Stone books, started with Stone Cold and ended with Lost in Paradise.

Each film in the series revolved around Stone, who was portrayed by Tom Selleck, and was a huge hit with moviegoers. Jesse Stone is so famous that fans have been clamoring for more Jesse Stone movies since the release of the ninth film in 2015.

But what's going on here? Is Lost in Paradise the last Jesse Stone film, or will there be more in the near future?

Selleck was interviewed by Parade in 2017 (yes, 2017!) about his work on the TV show Blue Bloods. Selleck has played the character of Commissioner Frank Reagan on the program since it first aired in 2010.

During the conversation, the actor was questioned about Jesse Stone's situation and if a sequel will be made. Selleck delivered some extremely encouraging news at the moment.

"I want to write another Jesse Stone," he added. We've made a tenth-of-a-penny bargain. They are difficult. The fact that we have creative freedom in the television situation is a huge plus for me since that doesn't happen very often. All I want to do is stay loyal to the character. I believe he still has a lot of opportunities to develop and evolve. I don't want to take advantage of the franchise. I'm not going to do it for the money, so I've been considering it."