Is Wikipedia Above The Media (And Law)? 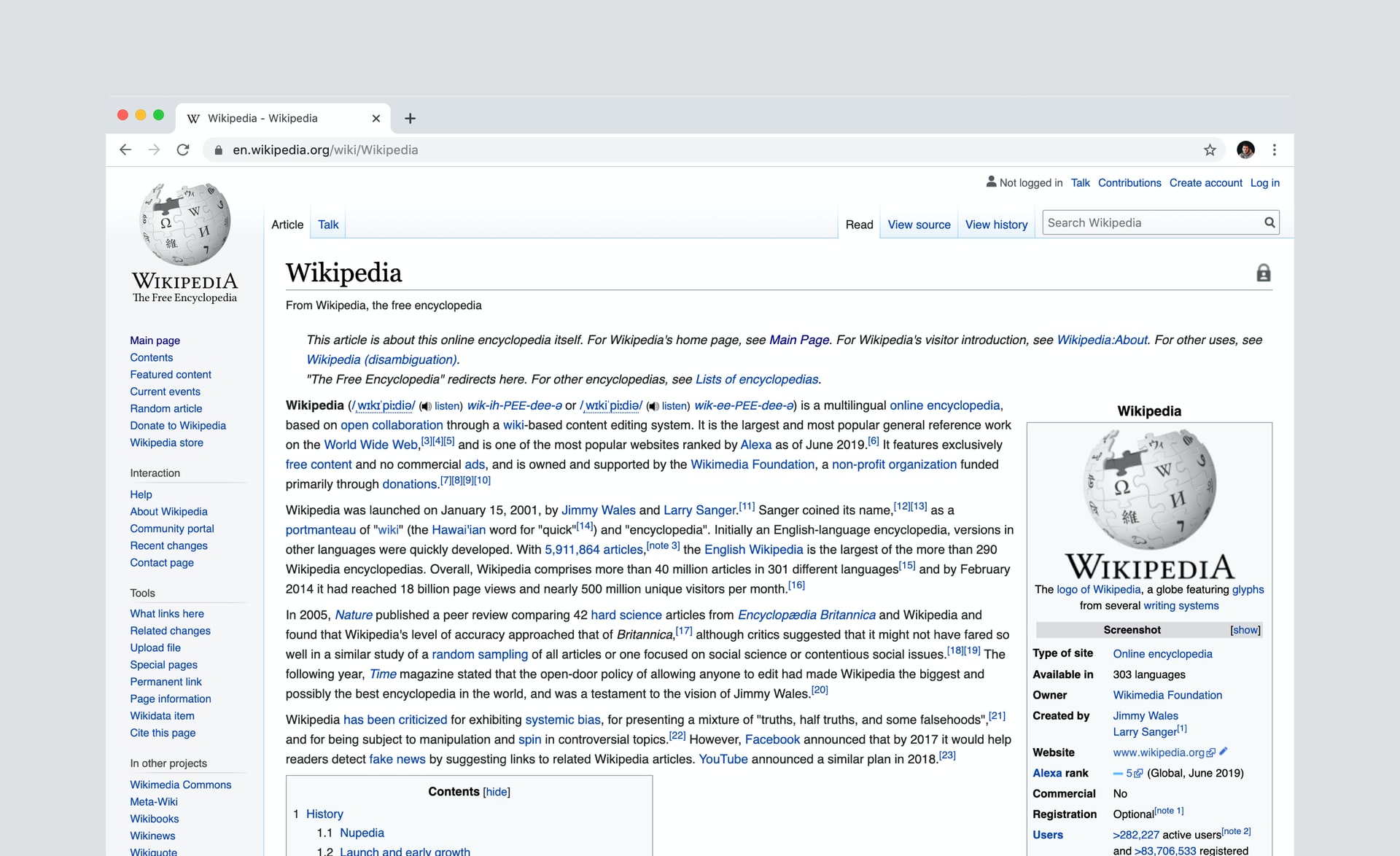 The rise of Wikipedia appears to be unstoppable. As of January 2022, English Wikipedia alone contains over 6 million articles and over 55,000,000 pages.

This is excellent news for anyone looking for quick and free access to information on a wide range of topics. However, is the platform perfect and the information on it accurate and objective?

Wikipedia’s ideological biases have repeatedly been the subject of public criticism. In fact, multiple sources have shown that Wikipedia is prone to Neutral Point of View violations caused by bias from its own editors.

Recently, we came across an instance of the Wikipedia page of an entrepreneur and physicist being deleted by Wikipedia’s admins and editors for no genuine reason. Moreover, the platform’s editors and admins were so determined not to leave the page up that they broke their own rules.

The person in question is Mike Norton, the CEO of a digital marketing agency called OMI Firm and a defense technology engineering firm called Wolven Industries.

Let’s learn more about Mike and how his Wikipedia page was deleted.

Who Is Mike Norton?

Today, Mike Norton is a successful entrepreneur. However, things didn’t always work in his favor. Mike has faced many hardships in life.

As it’s written in his memoir, Fighting For Redemption, Mike overcame a series of painful and personal struggles, including homelessness, physical abuse, and undetected tumors in his skull.

From a young age, Mike had countless dreams of developing futuristic technological designs. Unfortunately, because of what he’s had to go through, he wasn’t able to pursue them until later in life.

Only after his marketing firm was profitable, he decided to deepen his understanding of physics and engineering and enrolled in the University of York. It’s one of the top universities in the Russell Group, which is the equivalent of the Ivy League in the UK.

When the COVID-19 pandemic hit, Mike was studying physics through the OpenPlus program while running his marketing agency to fund his education as well as provide for his family.

It would have been more than enough to handle for most of us. Not for Mike though.

He saw the global pandemic as a grand opportunity to turn his dream into reality by developing products to help people protect themselves and their loved ones. His first venture was a handheld UV-C cleanser that's up to 30x more potent than his competitors’ products.

Yet, the UV cleanser is just the start. Mike is also developing an innovative air purifier that scrubs the air of carbon emissions, an AI assistant without the privacy issues involved with the most known assistants of its kind, and an electromagnetic engine that could reduce or even eliminate our need to rely on the power grid to name a few.

Mike has been writing self-reflective posts on his social media accounts for years, sharing his thoughts and life goal accomplishments and inspiring those around him. As a result, Mike's followers (more than 35,000 at the time of writing this article) have witnessed impressive personal and professional progress and look forward to reading about his current and future ventures.

While studying at York he simultaneously enrolled in the Berklee College of Music for a certification in music theory. As the CEO of two companies who also studies at two universities at the same time, has a family, and finds time for fitness and hobbies, Mike has been gaining increasing attention not only from his growing audience but also the media for what seems to be an almost superhuman ability to succeed.

Various media outlets have featured articles about him, and one has even referred to him as an underrated technological genius of our time.

Seems like there are plenty of reasons for having a Wikipedia article on him.

Well, not according to Wikipedia editors and admins.

After having been up for approximately three weeks, his Wikipedia page was buried from public view.

So, Why Was Mike Norton’s Wikipedia Page Deleted?

Wikipedia has an internal policy that states that articles must adhere to certain rules and guidelines in order to guarantee the accuracy and objectivity of each article.

But unfortunately, just on “paper.”

One of such rules is on notability. To be eligible to be featured on Wikipedia, it requires people or companies to first become notable. Wikipedia itself states that notability is subjective and not based on popularity. However, one of the factors necessary to be considered notable is being talked about in multiple secondary sources that are credible and independent of the person or company in question.

When one of Mike's fans submitted Mike’s life story to Wikipedia, it got a flood of traffic. Thousands of people were interested in reading his article. Nevertheless, the article was nominated for deletion. As per the reasoning, Mike Norton “wasn’t notable enough.”

The author adhered to editors’ various requests of editing the article and adding more sources proving his notability.

While many elements of Mike's life may be hard to believe, they are true and verifiable. However, the editors began notably fabricating reasons to keep his story from mainstream public view. One reason was that they believed Mike’s name should be spelled differently.

There are pictures, sources, references, and various third-party articles that support the authenticity of his story. Despite the author’s efforts and other editors openly admitting that the article not only was in good enough shape in terms of quality…editors kept rejecting it.

They even started blatantly violating the platform’s own guidelines to manipulate the outcome of the discussion.

The article was nominated for deletion multiple times in a row, and, each time, no consensus was reached. In such instances, according to Wikipedia, the article is supposed to remain.

Instead, Sarah Stierch, a leading editor under the username "Missvain," directly and publically commanded the author of the article to be ignored and personally relisted the article for deletion. In response to that, the author pointed out the violation of the rules and that, considering the growing media attention on Mike Norton, this could reflect badly in the media. To this, another editor under the username "SpartazHumbug!" wrote:

“The media can think what it likes. This is Wikipedia, one of the largest websites in the world. Do you think that we would ditch our principles or policies for fear of bad press?”

Now, if Wikipedians are breaking the platform’s rules and guidelines when it fits their agenda, what principles and policies is he referring to then? Do they even have anything to do with Wikipedia’s principles or policies?

As mentioned above, Mike Norton’s Wikipedia page had a lifetime of a little over three weeks and was continuously relisted for deletion because no actual consensus had been reached.

In the discussion, the author pointed out the various ways editors were not adhering to the platform’s policies: Repeatedly relisting the page for deletion when Wikipedia’s own rules states that the page should remain if no consensus is reached. Dismissing secondary sources despite not even having read through them. Commanding the author of the article to be ignored while the platform allows them to defend the article. Deliberately looking up information on Mike Norton in an inaccurate way to generate no search results about him (such as willfully spelling his name incorrectly). Demanding indisputable sources when no sources, in actuality, are indisputable.

Curiously, after Missvain relisted the discussion and the hypocrisies were pointed out, consensus was reached in a matter of a few hours…

…during the holiday season.

The page and associated files were deleted. The discussion moved on to the author’s talk page where editors who never participated in the deletion discussion process continued to talk down to the author of the article and mock the size of Mike’s following.

After the author tried to defend themselves and Mike Norton, they got banned from Wikipedia.

Discussions got archived to bury the evidence from the public eye.

Can We Trust The Information On Wikipedia?

Mike, watching Wikipedia’s arrogant attitude from afar, has become concerned about the biased control and manipulation of information and the underrepresentation of populations whom Wikipedia’s staff do not agree with.

Editors and admins are clearly using their position of power to choose which rules they follow and when, and it’s becoming increasingly obvious that it has nothing to do with Wikipedia’s original mission and everything with its editors’ personal beliefs and motivations.

This issue clearly stems from the lack of objective and unbiased members within its editor base.

Even Wikipedia’s co-founder, Jimmy Wales, has stated that the platform should not only be neutral but also encourage diversity. The diversity in its editor and admin base is crucial to ensure the neutrality of the information. Nonetheless, 90% of Wikipedia editors are English-speaking, left-leaning, white-collar men living in majority-Christian, developed countries in the Northern hemisphere, a goal that even Jimmy Wales says the foundation has "completely failed" to meet.

Is SpartazHumbug! right? Is Wikipedia above the media? And the law?

Should it control our access to information? Or should it do a better job of monitoring and controlling the actions of its editors and authors?

How many other stories have been buried and suppressed by Wikipedia because its editor and admin base didn’t agree with them?

It's time we had answers.