Important Correction To The Nerve Agent Attack that Did Not Occur 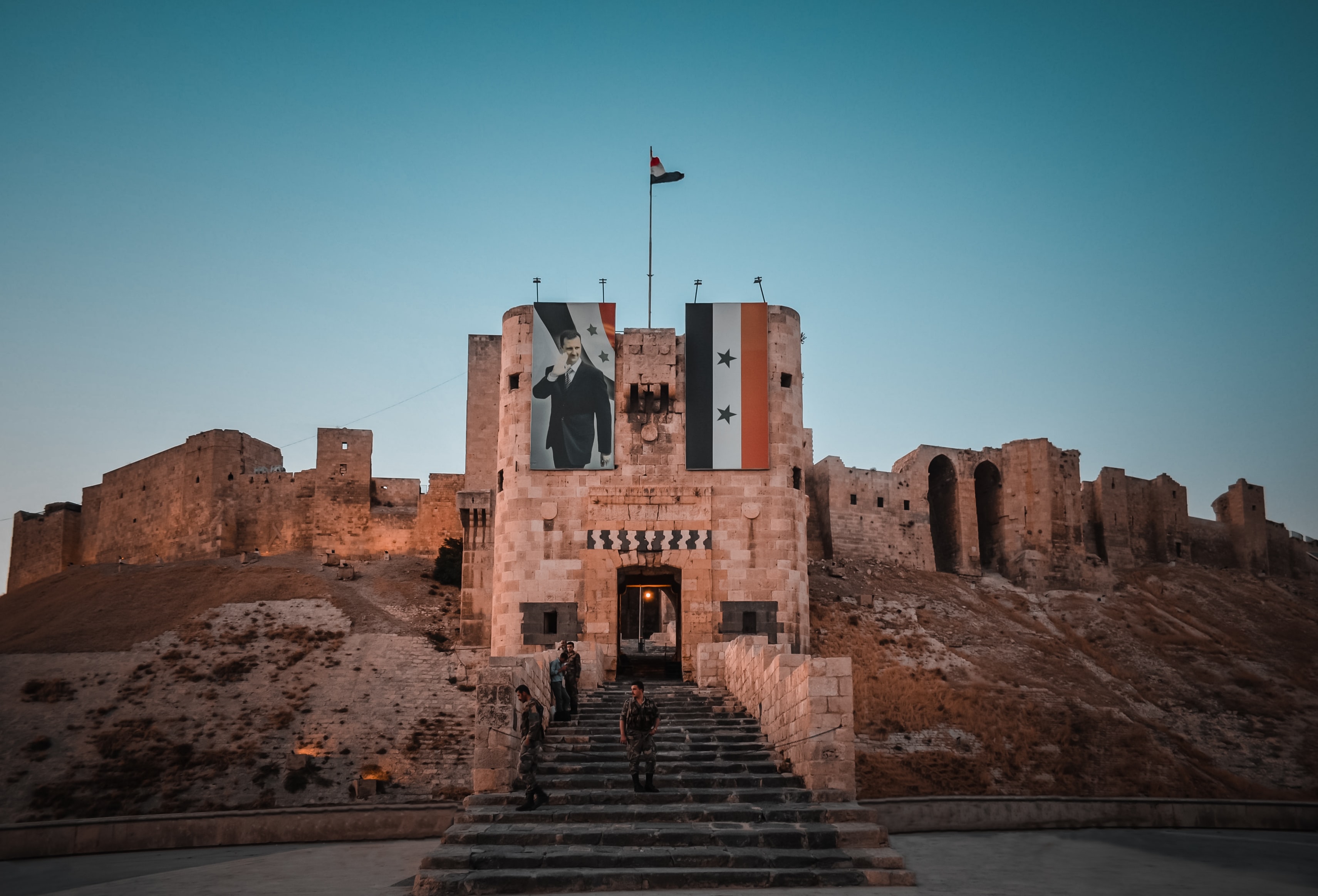 By Theodore A. Postol, professor emeritus of science, technology, and national security policy at MIT. Postol’s main expertise is in ballistic missiles. He has a substantial background in air dispersal, including how toxic plumes move in the air. Postol has taught courses on weapons of mass destruction – including chemical and biological threats – at MIT. Before joining MIT, Postol worked as an analyst at the Office of Technology Assessment, as a science and policy adviser to the chief of naval operations, and as a researcher at Argonne National Laboratory. He also helped build a program at Stanford University to train mid-career scientists to study weapons technology in relation to defense and arms control policy. Postol is a highly-decorated scientist, receiving the Leo Szilard Prize from the American Physical Society, the Hilliard Roderick Prize from the American Association for the Advancement of Science, and the Richard L. Garwin Award from the Federation of American Scientists.

For background on Dr. Postol’s previous essays on this issue, see:

COPYRIGHT_WI: Published on https://washingtonindependent.com/important-correction-to-the-nerve-agent-attack-that-did-not-occur/ by Paula M. Graham on 2020-12-28T07:47:37.631Z

This report corrects an important error in the earlier report released on April 18, 2017 titled The Nerve Agent Attack that Did Not Occur: Analysis of the Times and Locations of Critical Events in the Alleged Nerve Agent Attack at 7 AM on April 4, 2017 in Khan Sheikhoun, Syria.

In my earlier report released on April 18, 2017 I misinterpreted the wind-direction convention which resulted in my estimates of plume directions being exactly 180° off in a direction. This document corrects that error and provides very important new analytic results that follow from that error.

When the error in wind direction is corrected, the conclusion is that if there was a significant sarin release at the crater as alleged by the White House Intelligence Report issued on April 11, 2017 (WHR), the immediate result would have been significant casualties immediately adjacent to the dispersion crater.

The fact that there were numerous television journalists reporting from the alleged sarin release site and there was absolutely no mention of casualties that would have occurred within tens to hundreds of meters of the alleged release site indicates that the WHR was produced without even a cursory low-level review of commercial video data from the site by the US intelligence community. This overwhelmingly supports the conclusion that the WHR identification of the crater as a sarin release site should have been accompanied with an equally solid identification of the area where casualties were caused by the alleged aerosol dispersal. The details of the crater itself unambiguously show that it was not created by the alleged airdropped sarin dispersing munition.

These new details are even more problematic because the WHR cited commercial video as providing information that it used to derive its conclusions that there was a sarin attack from an airdropped munition at this location.

As can be seen by the corrected wind patterns in the labeled photographs on the next page, the predicted direction of the sarin plume would take it immediately into a heavily populated area. The area immediately adjacent to the north northwest of the road is may not be populated, as there was likely heavy damage to those homes facing the road from a bombing attack that occurred earlier at a warehouse to the direct east of the crater (designated on map below). However, houses that were immediately behind those on the road would have been substantially shielded from shock waves that could have caused heavy damage to those structures.

Since the reported wind speeds were very low, and the area is densely packed with buildings, a sarin dispersal would certainly not have simply followed a postulated plume direction as shown with the blue lines in the map below. Sarin aerosol and gas would have been dispersed both laterally and downwind by building fronts and would also have been dispersed downward and upward as the gases and aerosols were gently carried by winds modified by the presence of walls, space ways and other structures. A purely notional speculation on how a sarin plume might be dispersed by the structures as prevailing winds push the aerosol and gas through the structures is shown in the figure at the bottom of page 4.

The complicated wind pattern inside the densely populated living area would have resulted in sarin accumulating in basements and rooms that are roughly facing into the wind. There would also have been areas in spaces between buildings where sarin densities were much higher or much lower as the gentle prevailing winds moved around corners and created pockets of high and low-density sarin concentrations.

In addition, the crater-area where the alleged sarin release was supposed to have occurred was close enough to the densely populated downwind area that significant amounts of sarin that would have fallen near the crater during the initial aerosol release would have resulted in a persistent plume of toxic sarin being carried into this populated area as the liquid on the ground near the crater evaporated during the day. 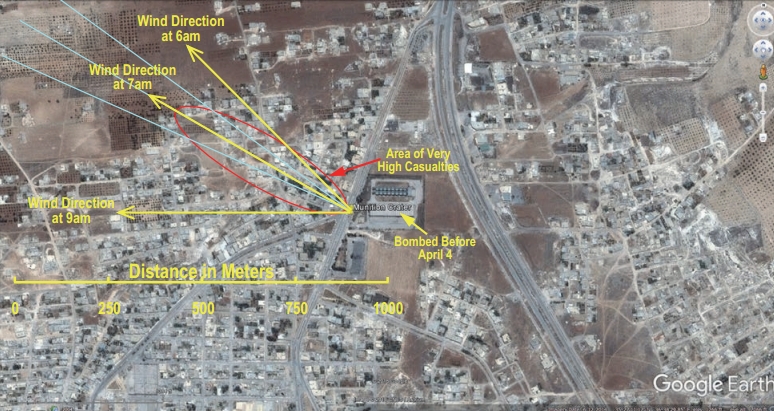 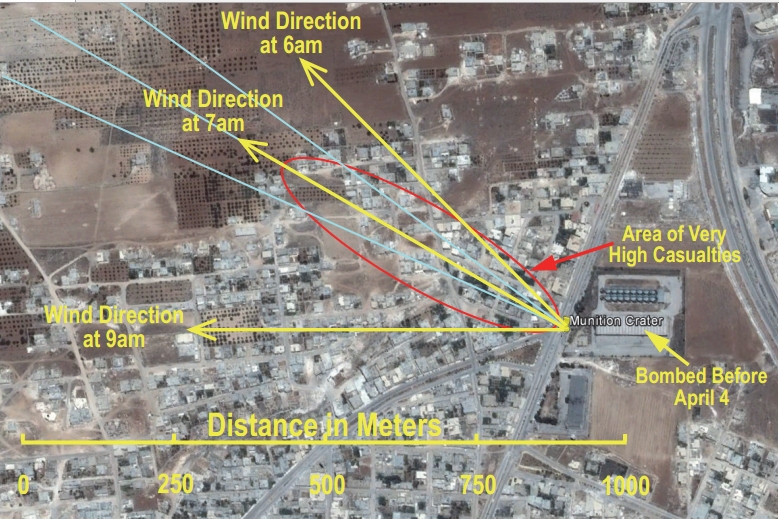 The images on page 4 are taken from two different videos published on YouTube by the same crew of journalists who reported in detail on the site of the alleged sarin attack. Additional video frames from these two videos are shown on pages five and six.

In one of the video reports the journalist takes the observer on a short walk to the location of a dead goat. A close-up of the dead goat suggests that the animal was foaming at its mouth and nose as it died.

Video taken from a drone at high-altitude operated by the television crew shows the location of the dead goat, which is clearly well up wind of the sarin release point. Under all but implausible conditions, the wind would have carried sarin away from the goat and it would not have been subjected to a significant dose of sarin had largely been within the area where it was found.

If one instead guesses that the goat might have been wandering around and had wandered into the path of the newly dispersed sarin, the goat should have been found on the ground near the release point as the sarin dose within the plume would have killed it very quickly.

Other images from the video report are of two examples of dead birds. Neither of these video images can be connected to the crater scene as there was no continuity of evidence from the movement of the cameras.

This assessment with corrected wind directions leads to a powerful new set of questions – why were the multiple sets of journalists who were filming at the crater where the alleged sarin release occurred not showing the numerous victims of the alleged release who would have been immediately next to the area?

There is a second issue that I have refrained from commenting on in the hope that such a discussion would not be necessary.

The mainstream media is the engine of democracy. Without an independent media providing accurate and unbiased information to citizens, a government can do pretty much what it chooses without interference from the citizens who elected it. The critical function of the mainstream media in the current situation should be to report the facts that clearly and unambiguously contradict government claims.

This has so far not occurred and this is perhaps the biggest indicator of how incapacitated the mechanisms for democratic governance of the United States have become.

The facts are now very clear – there is very substantial evidence that the President and his staff took decisions without any intelligence, or far more likely ignored intelligence from the professional community that they were given, to execute an attack in the Middle East that had the danger of creating an inadvertent military confrontation with Russia. The attack has already created a very serious further downward spiral in Russian-US relations, and has had the effect of seriously undermining US efforts to defeat the Islamic State – a common enemy of the United States, Russia, and the Western European powers.

As such, it is a sacred duty of the mainstream media to our democracy and its people to investigate and report on this matter properly. 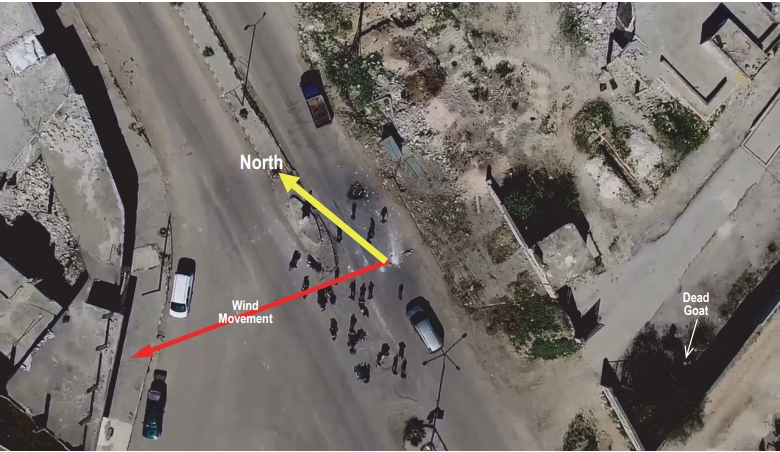 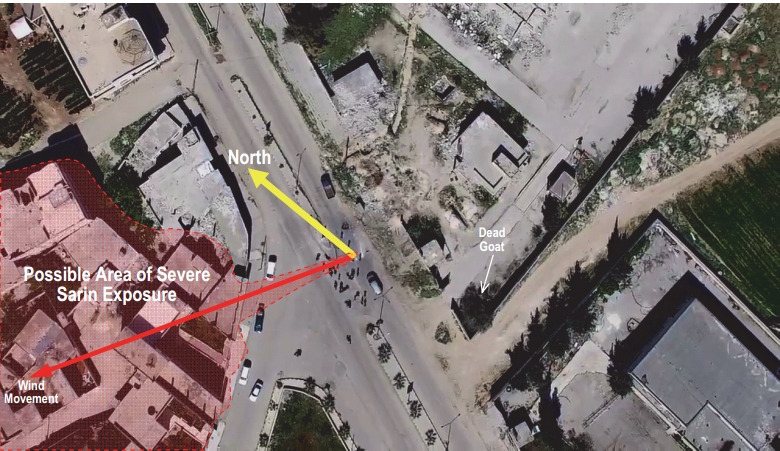 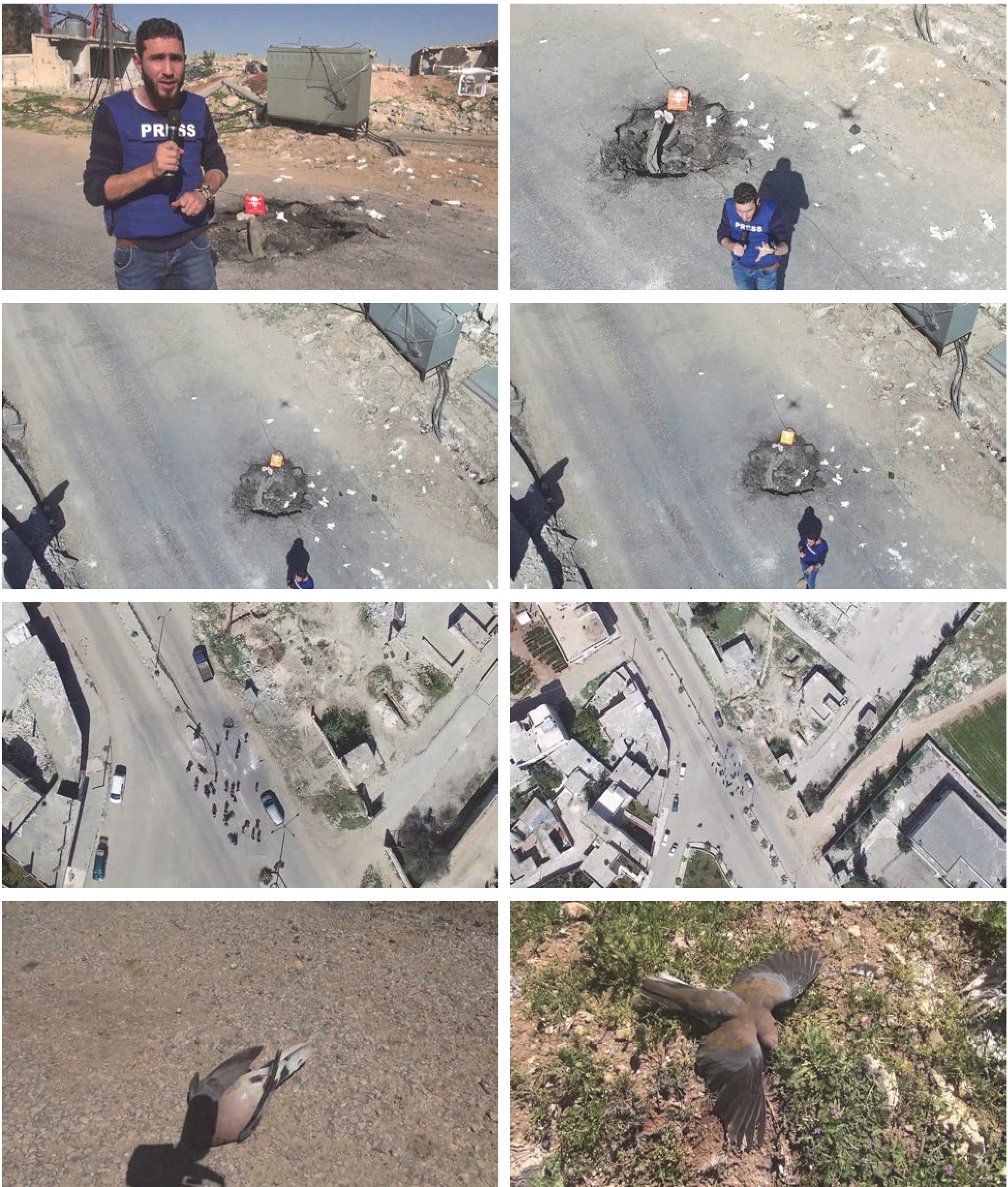 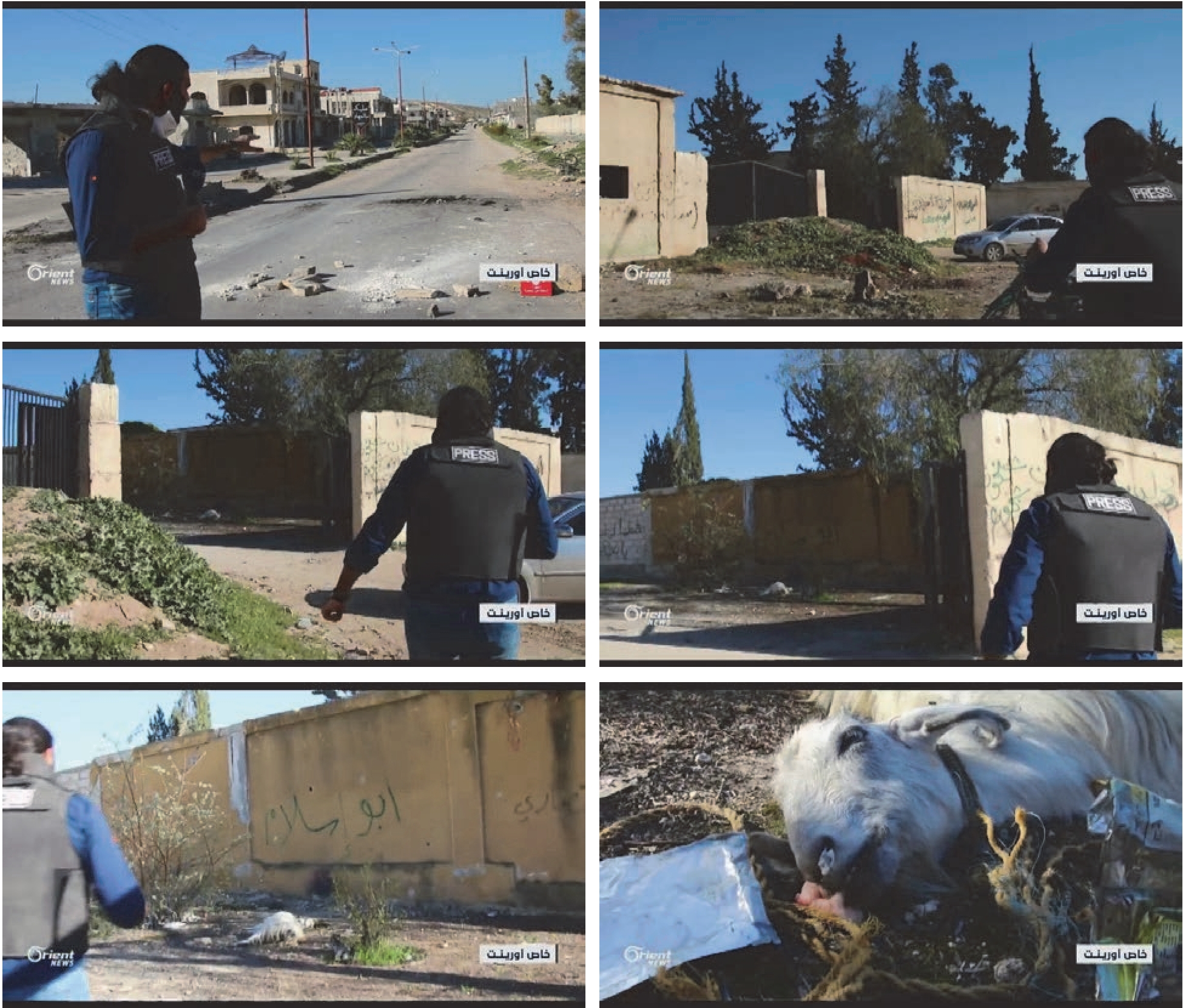 Here’s the .pdf version of Dr. Postol’s essay: Postol – Important Correction to the Nerve Agent Attack that Did Not Occur__Analysis of the Alleged Nerve Agent Attack at 7 AM on April 4_2017 in Khan Sheikhoun_Syrian_(April21,2017)_Optimized