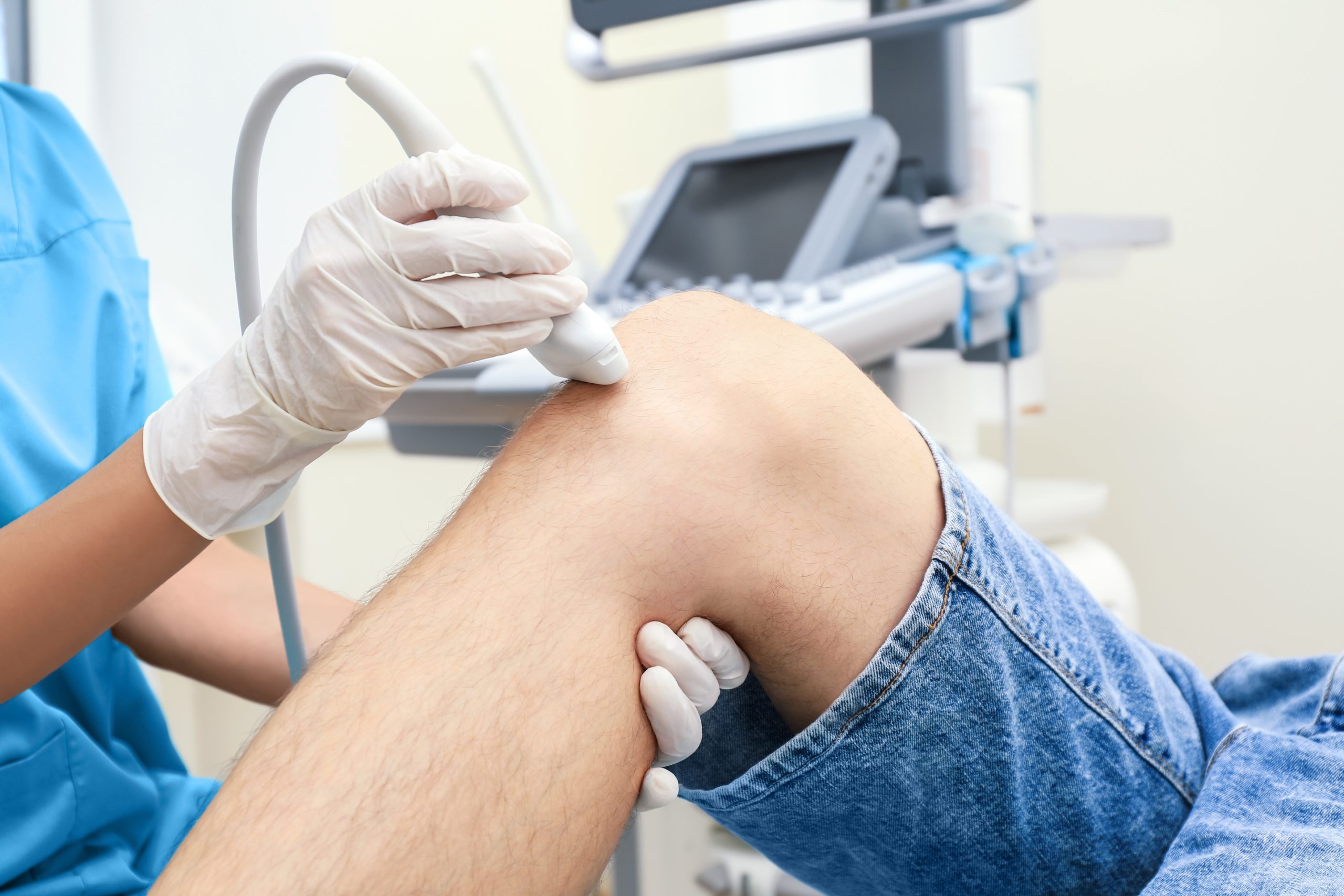 Ultrasound imaging is often used in almost all medical facilities.

Ultrasonic imaging seems to be better than other imaging methods like MRI and computed tomography (CT) because it is flexible, cheap, can take pictures in real time, doesn't use ionizing radiation, and has no known negative effects on the body.

Array transducers with piezoelectric components arranged in one dimension are some of the most common ultrasound imaging tools.

These transducers can make cross-sectional images in two dimensions (2D).

But doctors can use ultrasound to see illness as a volume and use three-dimensional (3D) ultrasound imaging to learn more about a patient's anatomy.

During the diagnosis process, volumetric ultrasound images give the doctor more certainty, which helps them make decisions.

What Is Ultrasound Imaging?

In a thin, flat part of the body, conventional ultrasound shows the pictures.

One improvement in ultrasound technology is three-dimensional (3-D) ultrasound, which uses sound waves to make pictures in three dimensions.

Doppler ultrasonography is a unique ultrasound technology used to assess how materials move throughout the body.

It lets the doctor see and evaluate how blood flows through the body's arteries and veins.

Doppler data is turned into a spectrum of colors by a computer for color doppler.

This shows the speed and direction of blood flow through a blood vessel.

A more recent approach called power doppler is more sensitive than color doppler and capable of revealing more information about blood flow, particularly when blood flow is weak or minimal.

However, power doppler cannot tell the radiologist the direction of blood flow, which might be critical in certain circumstances.

Instead of presenting blood flow data as a color image, spectral doppler presents it visually in terms of the distance traveled per unit of time.

It can also turn information about blood flow into a unique sound that can be heard with each heartbeat.

The Principles of Ultrasound Imaging

What Are Some Common Uses Of Ultrasound?

Ultrasound tests can be used to diagnose a number of illnesses and can also check for organ damage after a sickness.

Ultrasound is used by doctors to evaluate:

Ultrasound can be used to look at a lot of the body's organs, including, but not limited to, the following:

Ultrasound is also used to:

Doppler ultrasound aids the physician in seeing and assessing:

Most of the time, a doctor can tell if a patient is a good candidate for angioplasty by looking at the speed and amount of blood flow using doppler ultrasound imaging.

How Does Ultrasound Imaging Work?

A sound wave bounces back or echoes when it hits an item.

It is possible to establish how far away an item is by analyzing its echo waves, as well as its size, shape, and consistency.

This includes whether the thing is solid or fluid.

Doctors use ultrasound to find abnormal structures like tumors and changes in the way organs, tissues, and arteries look.

A transducer delivers sound waves and captures the echoing (returning) waves during an ultrasound test.

When rubbed against the skin, the transducer emits short bursts of inaudible, high-frequency sound waves into the body.

As sound waves bounce off interior organs, fluids, and tissues, the transducer's sensitive receiver detects minute changes in pitch and direction. These characteristic waves are quickly measured by a computer and shown in real time on a monitor. Typically, the technician records one or more frames of the moving visuals as still photos. They may also preserve photos in brief video loops.

A particular ultrasound method known as Doppler ultrasonography detects the direction and speed of blood cells as they flow through vessels.

The mobility of blood cells causes the pitch of reflected sound waves to alter (called the Doppler effect).

A computer records the sounds and figures out what they mean.

It then makes graphs or color pictures that show how blood moves through the blood vessels.

How to use the ultrasound probe

The vast majority of current 3D sonographic imaging systems are based on 1D (linear or curved) or annular array transducers, the exact positions of which are monitored by a position-sensing instrument.

In 1D array transducers, tens or hundreds of piezoelectric components are stacked in a linear array and fired simultaneously or sequentially to form a 2D planar image.

Because the array is essentially 1D, the transducer can only collect 2D images.

Mechanical transducers employ this 1D array transducer to produce a 3D image by combining 2D pictures with information about the 1D array's position.

Position data may be gathered in the exam room using either the transducer's internal stepping motors or an external positioning device.

Images and position data from the ultrasound imaging signal collection are recorded as a volume file at the same time.

A 3D ultrasound dataset may be collected using one of two approaches using a mechanical transducer.

The first approach, also known as random or free-hand scanning, uses an external positioning device to record the movement of an ultrasonic transducer in space.

The second method is called "mechanical sequential scanning," and it uses sensors inside the transducer to figure out where it is as it moves along a set path.

A sonographer does free-hand scanning by holding the 1D array transducer and moving it over a target, such as the body to be scanned.

The sonographer directs the capture of many 2D images at different places and angles.

The information about the angle and location of the transducers from each of the 2D pictures is then put together and processed to make a 3D image.

A variety of position-sensing instruments were used to collect position data.

In practice, devices like an acoustic sensor that pulses an acoustic signal to a fixed microphone system in the exam room, a mechanically articulated arm that can be moved like other robot arms, and an electromagnetic sensor attached to the transducer that constantly monitors the transducer's position in space are used.

The acoustic sensor and mechanical articulated arm technologies, in contrast to the electromagnetic locating system, are often not favored in therapeutic situations.

The free-hand acquisition approach has mostly been employed in obstetrics and gynecology.

Even though free-hand scanning gives you a lot of freedom, the image quality is likely to get worse, especially when photographing small objects, because using your hands makes it hard to get the camera in the right place and makes the scanning uneven.

It is feasible to avoid the difficulties associated with free-hand scanning by physically moving the 1D array transducer in a precise and defined manner.

When the transducer is moved, 2D ultrasonic photos are collected at present spatial intervals to ensure that the volume of interest is captured without missing any regions.

A variety of mechanical sequential scanning transducers have been developed by a number of researchers as well as commercial businesses.

This transducer, on the other hand, eliminates the bulk of the issues associated with the external positioning devices necessary for free-hand scanning.

Calibration and precision are two of these issues.

The mechanical sequential scanning system can control a stepper or servo motor to change the position of the 1D array transducer in a very precise way.

The three-dimensional information is generated by the physical movement of the one-dimensional array transducer, which may be done automatically by a mechanism or manually by the operator.

The optimal option is to have 3D ultrasound images immediately available following the examination, but it is also the one that presents the largest technical obstacle.

Electronic scanning may be done across a plane using a variety of ways to get three-dimensional information.

In this technology, a 2D matrix array transducer generates an ultrasonic pulse that radiates from the array in the shape of a pyramid.

These transducers can generate and guide an ultrasonic beam both horizontally and vertically.

After the sound pulse has been sent into the wide-angle cone volume using parallel processing, the volume can be sampled with several sound beams in a single pass.

The images that have been integrated are, in principle, real-time 3D ultrasound scans.

The 2D matrix array transducer is regarded to be more suitable for evaluating the heart than for gazing into the belly.

This is because the 2D matrix array transducer is so small.

New commercial items, on the other hand, have expanded the field of its use to encompass obstetrics and gynecology. 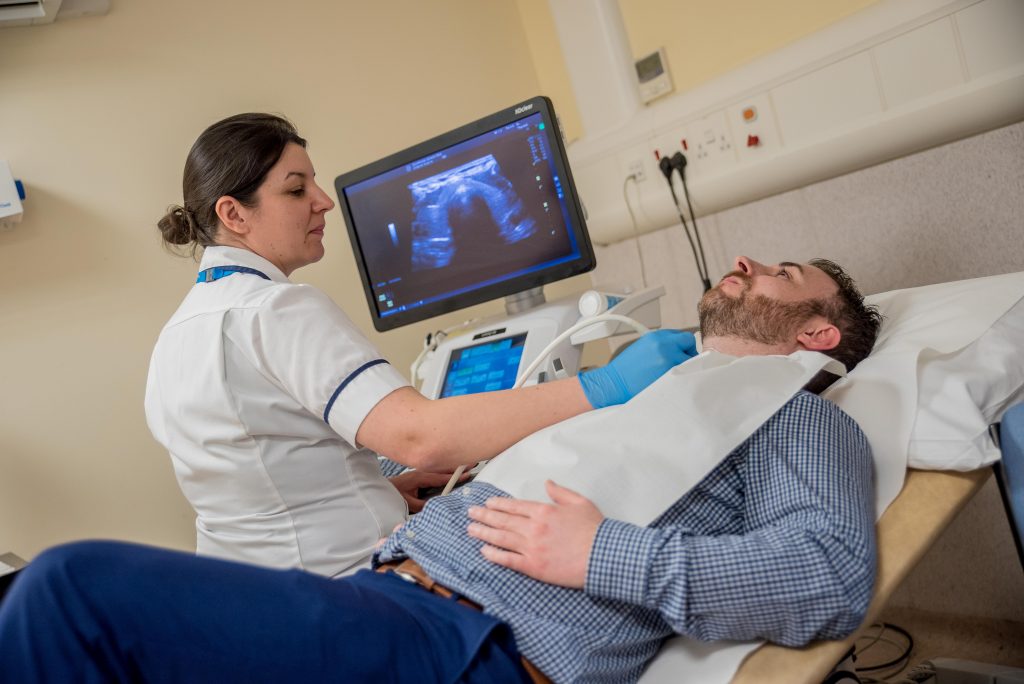 How Long Does An Ultrasound Take?

The average ultrasound scan lasts between 15 and 45 minutes.

Most of the time, a doctor, radiographer, or sonographer does them in the radiology department of a hospital.

How Do I Prepare For An Ultrasound?

There are, however, a few exceptions: Some scans, such as a gallbladder ultrasound, may require you to refrain from eating or drinking for a specified length of time before the test.

Others, such as a pelvic ultrasound, may need a completely empty bladder.

Can You See A Tumor On An Ultrasound?

An ultrasound (also known as ultrasonography, sonography, or sonogram) assists physicians in looking for tumors in parts of the body where x-rays do not show up properly.

This technique is often used by doctors to guide a needle during a biopsy.

Ultrasounds are typically rapid and do not require any particular preparation.

What Does Red Mean In An Ultrasound?

Velocity is represented by various shades of red and blue.

3D ultrasound imaging is a relatively new and fascinating technology that has aroused attention in academic and commercial circles for its potential to provide new options in patient viewing.

The fact that 3D ultrasound imaging opens up new possibilities has fueled this interest.

Because computer and signal processing technology are constantly improving, it currently only takes a few seconds to get, evaluate, and display volume data.

This has paved the way for the development of more effective means of rapid diagnosis and intervention.

Transducer technology improvement is playing an important role in increasing the performance of 3D imaging in order to supersede present 2D sonography by giving real-time capabilities and interactivity.

It is expected that 3D ultrasound imaging will become an important part of diagnosing and treating patients every day in the not-too-distant future.