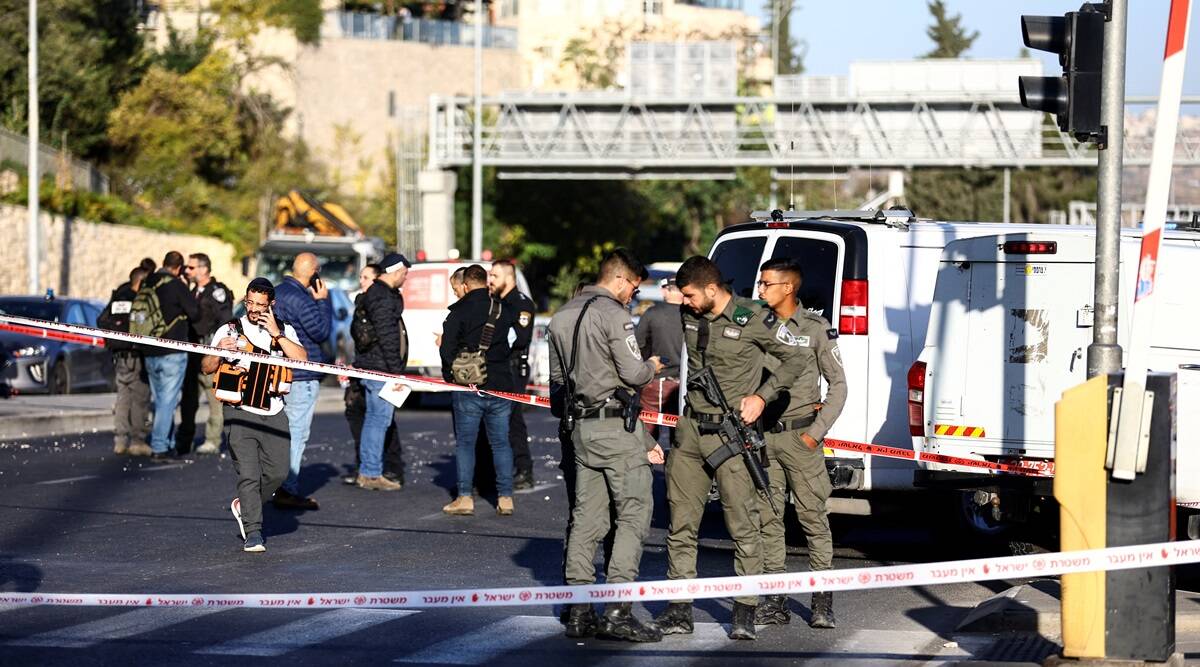 On Wednesday, twin blasts kill a teenager in Jerusalem in a suspected Palestinian attack. One 16-year-old boy was killed, and at least 14 other people were hurt. The Israeli authorities said it looked like Palestinian militants were behind the attack.

People were going to work when the explosions happened in two busy places on the edge of the city. Police said that a homemade bomb near the city's exit was to blame for the first blast, which happened during morning rush hour. The second, which came about 30 minutes later, hit a junction that led to a settlement on the outskirts.

The teen who died was a Jewish seminary student from Israel and Canada named Aryeh Schupak. The prime minister of Israel said that the attack was "different from what we have seen in recent years."

There has not been such a coordinated attack in Jerusalem for many years.

Kan Radio said that the bombs were hidden in bags full of nails and appeared to have been set off by a cell phone.

When the first bomb went off, a sudden cloud of smoke rose from the bus stop, which was caught on CCTV. The area, which was blocked off by emergency services, was full of broken things.

Twelve people were taken to the hospital after the first explosion, and three people were hurt in the second. A Canadian-Israeli boy who was 16 years old died from his injuries.

In a year when violence has been getting worse, the atmosphere feels tense. Palestinians have attacked Israelis with guns and knives, and Israeli military raids in the occupied West Bank have killed Palestinian gunmen and civilians.

So far, no group has claimed responsibility for the explosions. The Palestinian militant groups Hamas and Islamic Jihad, on the other hand, both praised the people who did what they called the "operation."

Deputy Commissioner Sigal Bar Zvi, who is in charge of the Israeli police's operations division, said that the bombs were made with "high quality" explosives and were hidden in a bush and behind a wall at the bus stops.

She also said that because of how the attacks were done, investigators think they were planned by a group. Israeli media reported that security sources said both bombs had nails and were likely set off from a distance.

After meeting with Israel's security chiefs, outgoing Prime Minister Yair Lapid said that Aryeh Schupak "was a boy who never wronged anyone in the world, and he was murdered simply because he was Jewish."

He also promised that security forces would "find these heinous terrorists, those behind them and those who provided them with weapons."

I want to say to the citizens of Israel: We will find them. They can run, they can hide - it won't help them; the security forces will reach them. If they resist, they will be eliminated.

The attacks happen as Prime Minister-designate Benjamin Netanyahu and his Likud party continued to talk with far-right and religious parties to form a new coalition government. In an election that was mostly about security, they won the most seats in parliament.

Mr. Netanyahu warned as he visited survivors of the attacks in hospital:

We still have a fight with cruel terror, which raise its head again. We will do anything to bring back the security for the citizens of all Israel as soon as possible.

Itamar Ben-Gvir, the leader of the ultranationalist Otzma Yehudit (Jewish Power) party, is going to be Mr. Netanyahu's internal security minister and will be in charge of the police force. He went to the scene of the first explosion and said that Israel needed to do something to stop Palestinian attacks.

Even if it's in the West Bank, lay siege to them and go from house to house in search of guns and restore our deterrence power.

Justin Trudeau, the prime minister of Canada, said on Twitter that he was "incredibly saddened to learn about the death of a young Canadian in the terrorist attack in Jerusalem", which he condemned "in the strongest possible terms."

Tom Nides, the US ambassador to Israel, tweeted that Naomi Pilichowski, an 18-year-old Israeli-American, was one of the people hurt in what he called a "heinous terrorist attack." Rabbi Uri Pilichowski, an educator and author, said that she had gotten a small cut.

This year, Palestinians have killed at least 25 Israelis in a series of deadly attacks.

In the meantime, Israel has sent troops into the occupied West Bank almost every night to search for and arrest people. More than 130 Palestinians have been killed, both armed militants and ordinary people.

Palestinian health officials said that on Tuesday night, an Israeli soldier shot and killed a 16-year-old Palestinian boy named Ahmad Amjad Shehada during fighting in the city of Nablus in the northern West Bank.

The Israeli military said that during an operation to "secure the entrance of Israeli civilians to Joseph's Tomb," its soldiers shot at "armed suspects." Jews worship the tomb because they think the biblical figure There, Joseph is buried.

In a separate incident, Palestinian gunmen took the body of a 17-year-old Israeli Druze boy who died in a car accident near Jenin on Tuesday, his family said. The body was taken from the nearby city of Jenin.

The uncle of Tiran Fero told the Haaretz newspaper that he was at Jenin's Ibn Sina Hospital with his nephew when a group of men "fired their weapons into the air and yelled in Arabic," then "disconnected him from the life support machines and threw him into a vehicle."

Mr. Lapid said on Wednesday, "If Tiran's body is not returned, the kidnappers will pay a heavy price."