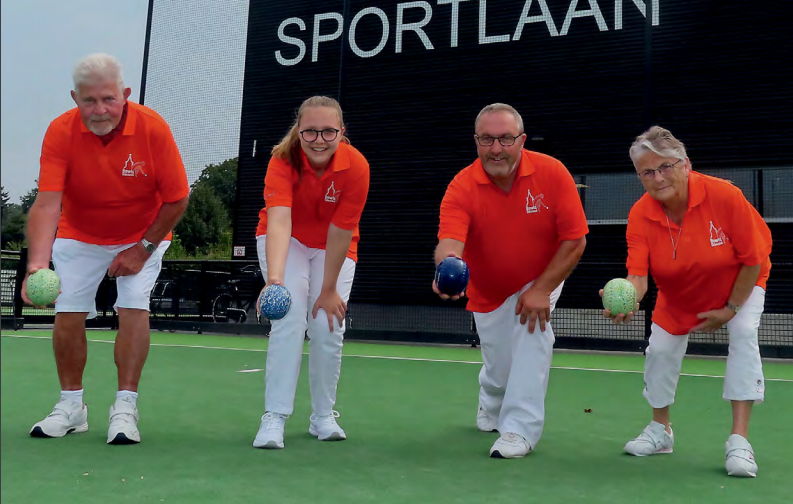 "The 53-year-old who works at an agricultural machinery factory explained: "At the end of 1989, I went to Australia; to Keysborough Bowling Club.

It was then that I first came into touch with lawn bowling outdoors. I'm never going to forget this wonderful club where I soon learned that this is a modern game where you can play together and in competition for all generations.

I contacted the England bowls counsel for a book on rules upon returning home and began going to the local board to get indoor or outdoor bowling to my hometown of Oldenzaal.

I was unsuccessful and had to wait almost two decades to find a club that played on a Saturday! I had to drive 28 miles each Saturday to get there.

It was then that I realized that I had to start my own club." And so Erik was eventually able to do so in September 2010, along with three enthusiastic friends."

He continued: "Soon after, today at Bowls Oldenzaal, we began growing up to our 24 members and visitors training.

" Erik now plays flat green and crown green indoor and outdoor and has achieved many achievements at national competitions, tournaments and events. He was an official at the Paralympics in the Netherlands as well.

When asked how it feels to have three generations of your family playing bowls, Erik said: "To be able to play with mixed generations is a joy and so much fun."

My daughter Britt is a beautiful girl who loves everyone and makes everyone happy; she plays well, and she's a very talented young lady with a bright future for me in our sport.

"She was playing on the rink next to us the year I was runner-up in the nationals, how could I stay focused watching her and her teammate play all those great shots and win 22-5? "As for my mother, she's something else, she's a pleasure and she's so much fun to be around.

She's passionate and enjoys every bowl played, with some funny acts at the end, including falling off a bench because she's so much fun to be around.

So what, in Erik's opinion, makes bowls such a family-oriented game? He said: "It is a sport that is really accessible to anyone and especially to families." To begin with, since our club makes playing with a set of bowls open to everyone, the costs are minimal.

It's the most social sport there is. "New contacts are developed and friendships originate from it. How great to be able to welcome people of all ages and blend them, creating understanding and respect. "Young with young and old people with elderly and middle-aged people.

"This is what makes playing bowls the greatest sport of all sports at any level." And is there family rivalry? "Yes, but it's not so much. My daughter still wants to beat her dad, which I find most inspiring, not only for me, but also for her.

And she's making me want to play my best shot over and over these days, and the same thing with Britt. My mom needs to win, to be fair all the time.

Rivalry, yes, but a sporty one. Erik's mother, Pee Middelveld Wijnholds, is now 73 and when Erik formed Bowls Oldenzaal in September 2010, she began playing. Her claim to fame is a second place finish in the indoor pairs with Erik in the NIOBB regional south.

She said, "I love seeing the members of the club and my son and granddaughter in action." It's a perfect day out when I'm able to play with Britt and Erik, and I feel proud.

In the fields, I have so many friends, which makes it a great pleasure to go out and play bowls." Fifteen-year-old Britt bothered her dad to start playing." Even before forming his club Bowls Oldenzaal, my dad was playing for some time," she recalled.

"I asked several times when I should play dad and he was always holding back to get started with me. Ultimately, when he told me that I could come and play three years ago, I was very happy.

It is the elderly in my country who mostly play and that is not fair. It's a fun game and I want to see more of my age-group involved. Britt was last season's national indoor pairs champion, although relatively new to the sport.

"I have some wonderful young friends, Dik vd Burgt and Mariska Nagtzaam, so I'm very fortunate to learn from them and keep the fun in the game

," she said. "I really like it." So how does Britt feel like playing bowls with her dad and grandmother?

Yeah, my dad's a pain sometimes (just joking), but he's a really funny, beautiful dad and a great player. My grandmother is very sweet, and she plays with a lot of passion; all of us love to look at her.

She is the sweetest grandma one would have wished for. I enjoy playing with her on the team.

"Not all families are lucky enough to have three generations alive, let alone being able to play bowls, and it is all the more special now we are not able to see each other due to the state border closures across Australia," says Stacey Rogers, a member of Bendigo Bowls Club in Victoria.

Bowls have been played for four generations in her household, with three generations still playing. Stacey said, "My dad Brian is a Waikerie SA ex-Division One player who continues to play Division Two and introduced my daughter Amelia Bruggy about 12 years ago.

" She managed to win Under 18 national titles, showcasing the Australian Open Fours in 2106 and again in 2017, as well as many state titles and representations for both Victoria and Tasmania.

She was also the first woman to play the Division One weekend pennant the same year in the Bendigo District to win the premiership! Stacey picked up her own bowls about three years ago and played her first year of pennant at Division Nine at Bendigo BC last year.

"Added to that, here in Bendigo, my father-in-law, Ian Brown, is also playing Division One and his son, my partner and step-dad to Amelia, Andrew Brown, is skipping Division One, and Amelia is playing in his rink," continued Stacey.

"They both represented Victoria on two occasions in the same test series and won several district mixed pair events with their highlight being runner-up in the 2017 Victorian Championships mixed pairs together."

Rolling Back The Years

Bowls have been played for almost three decades by the Stacey family. "My dad Brian has been playing at Waikerie Bowls Club for more than 20 years and his dad was a member there for several years prior also," she said.

"My mum, Kerry, joined there four years ago now and my sister two years ago. "My husband, Andrew, has been playing for 15 years, with the last ten at Bendigo Bowls Club where he is also the greenkeeper.

My daughter Amelia, who won the Australian Open Fours and the other events as I described earlier, has been a member there for five years and will still be, but she has moved to Bourke in Outback Central New South Wales over the past six weeks and will join the club up there in the coming weeks and play pennant and tournaments when she can work around.

"I've been playing for three years and for all that time have been a member of the Bendigo Bowls Club playing a few district events, but last year I only took up pennant." A few years ago, three generations of Stacey's family played a tournament together.

"Stacy continued: "My father, myself, my daughter and my husband were three generations old. Over the Easter break two years ago, it was at Waikerie BC.

For us, particularly my dad and myself, it was a very sentimental moment because we have a deeper appreciation of being able to share a shared interest and passion, but also of knowing our capacity to do this together physically. Not all families are fortunate enough to have three generations alive, let alone be able to play, and because of the state boundary closures across Australia,

it's all the more special now that we are not able to see each other. I'm sure she, too, will remember how lucky we were when Amelia matures, and hopefully she will be able to play together again in the future.

I know my dad is really emotional about how important the weekend was to him with all of us playing and he was teary in a presentation at the end of the weekend!

Over the weekend, we also had a lot of fun and humour on the green because we all have a strong understanding and appreciation of the sense of humour of each other, so it was really fun.

But we are all very competitive, too, as you can imagine playing Division One bowls with dad and Amelia and my partner Andrew, so we were all out there to do our best.

In fact, it was through bowls that Andrew met Stacey. "Along with Aaron Wilson for the Under 18 Bendigo Dragon's Team, he was one of the coaches attending a Victorian Under 18 squad tournament in which Amelia was playing.

"From there, we saw each other at several Under 18 events he supported, and when we moved to Bendigo, Amelia decided to join the Bendigo Bowls Club where he was a member, so we saw a lot more of each other."

So what’s the best thing about playing bowls together?

Stacey said: “I am sure that if you asked Andrew what the best part about playing with his stepdaughter he would say being able to share the achievement with her.

It is fabulous that they have such a mutual interest in the sport and can both compete at that level and it is something that they should not take for granted. “In terms of what we don’t like about playing together... I’m not too sure that there are many!

I know I'm letting down the team, so the others will probably say my skills, but I can live with that. I'm very much a beginner and happy to learn.

"I know I let the team down, so the others would probably say my abilities, but I can live with that. I’m very much a novice and happy to learn. " "Having said that, Amelia and Andrew find it less stimulating to watch."