Superhero Uber Driver Pulls Over To Save Lives

For today’s superhero Uber driver stories, a driver midway to an airport stopped the car to rescue people from a burning building.

On the early morning of August 17, Fritz Sam was headed to Queens, New York City.

That day’s second rider asked him to drop her off at LaGuardia Airport.

When they reached the Bedford-Stuyvesant (Bed-Stuy) neighborhood in Brooklyn, he spotted a fire coming out from a brownstone.

It was from the second-floor window of a four-story apartment building at 49 Classon Avenue.

Sam told CBS New York that the moment the thought that a person could be inside that burning place popped into his head:

“There was something in me that couldn’t hold back.”

So, the 54-year-old father-of-two stepped on the brakes and decided to do something about the situation.

Still, the African-American superhero Uber driver asked permission first from his passenger before proceeding with his heroic act.

Façade of a Brooklyn brownstone, with six windows replaced with boards

According to one firefighter, the fire broke out before 8 a.m., CBS reported.

It took the firefighters approximately 30 minutes to make the situation “under control.”

No one perished or got hurt from the fire incident.

An Uber spokesperson released a statement lauding the company driver.

We’re incredibly grateful to have such a heroic and thoughtful member of our community in Fritz.

Sam assisted two residents to get out of the burning premises.

Not only that, this superhero Uber driver and his passenger arrived at the airport without the latter missing her flight.

From The Car And Into The Fire

In his interview with CNN’s Alisyn Camerota, the host asked Sam why he pulled over.

The superhero Uber driver told her he had that “habit.”

He said he wasn’t sure how to put it into words but explained that it could be a kind of “feeling” that prompts one to “do something.”

Sam helped a man and a woman leave the building before it was too late.

It took a lot of convincing before they agreed to evacuate with him.

In the later part of the interview, his passenger, Jemimah “Jemma” Wei, joined through video conferencing.

When Sam got out of the car to see how he could help, Wei followed behind.

She joined other people in yelling “fire” just in case to rouse any sleeping resident, according to CNN.

She also took a picture of the burning brownstone and uploaded it on Twitter.

Some media outlets used it for their reports.

She said that she was “impressed” that he “didn’t even hesitate” to do what he did.

Sam previously described her as “awesome” for being an understanding passenger.

Wei told him that people would message her about him and how he had given them “hope.”

These are really difficult times . . . you just peeled through all of that noise and reminded everyone that there are good people out there.

Sam also left a message to all those who temporarily got relocated because of the fire.

He told them to “hang in there” despite their “tough” situation.

This superhero Uber driver assured them that “everything’s gonna be OK” and that they would “be back home soon.”

Camerota concluded the interview by telling him:

Fritz Sam, you do restore everyone’s faith in humanity.

On August 19, Uber tweeted about its “first-ever Uber Yearbook” that will feature “some of the most inspiring people” in its company.

For his heroic deed, Fritz Sam will be included in its first edition.

He retweeted Wei’s post about the incident and remarked about the goodness of people. 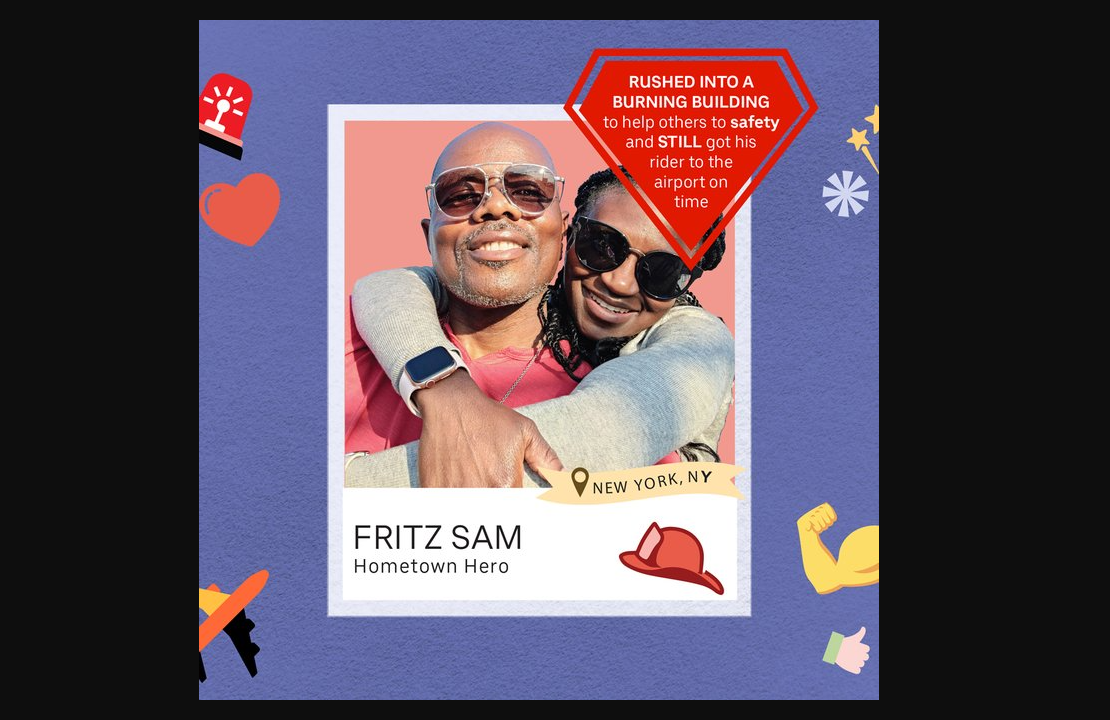 Hometown hero Fritz Sam embraced from the back by wife, Nikki, for the Uber Yearbook

Khosrowshahi’s tweet didn’t escape the attention of one writer.

And you paid him 10 cents a minute while he was being a hero. But hey, he got a call and a Twitter post.

Uber gets criticized regarding its treatment of drivers, according to a BBC report published this August.

They are not entitled, for example, to a minimum wage.

Based on its financial report for the second quarter of 2022, as published on its website, Uber’s revenue “grew 105 percent YoY [year-over-year].”

That translates to $8.1 billion in revenue.

An Uber driver, of course, need not be a superhero Uber driver doing heroic acts to justify a plea for better benefits.

According to Khosrowshahi, the number of Uber driver applicants increased in 2022 by 31 percent.

And Wei was one lucky Uber rider.

As what she told CBS New York:

Khosrowshahi should perhaps work on creating a wonderful employee benefits package for its drivers.

Lack of benefits may drive away other unheard of superhero Uber drivers.