An Absolute Look at Mac OS 9 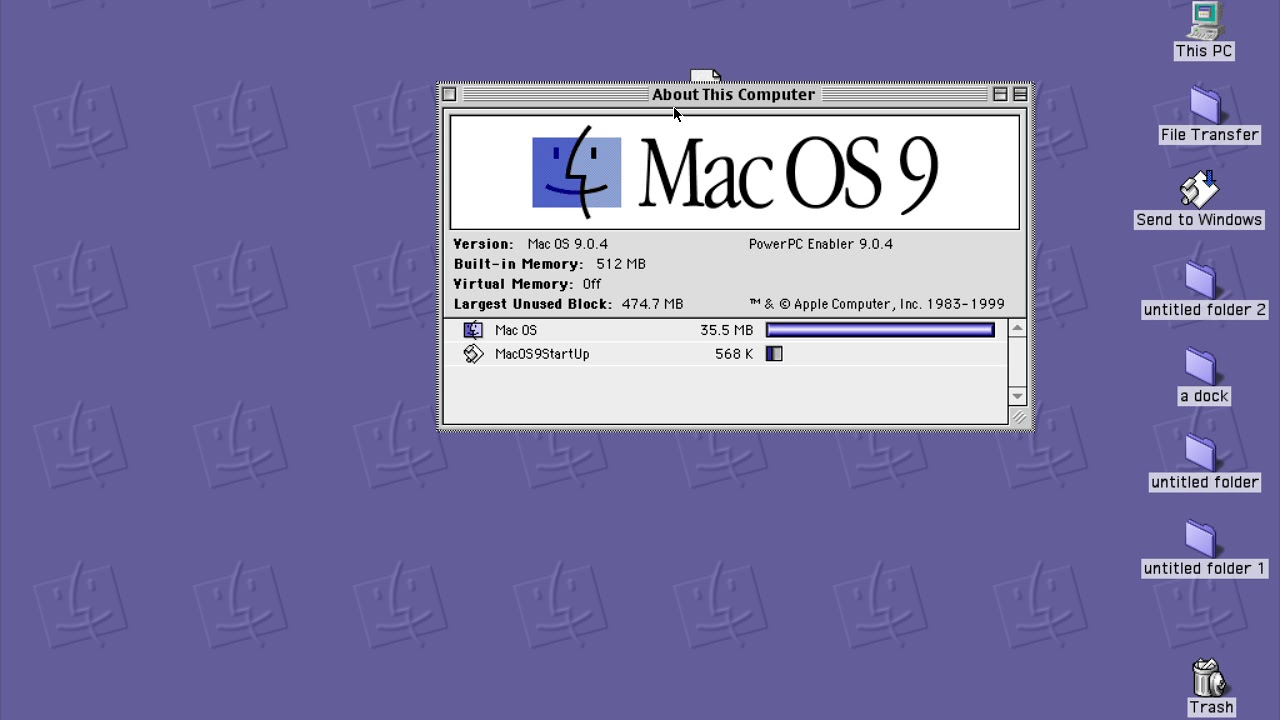 Two weeks ago select members of the Apple press got a behind the scenes look at OS X Mountain Lion before it was introduced to the public. Some Apple bloggers were upset that they were left out and didn't get a briefing from Phil Schiller, or an exclusive invitation to Apple's campus in Cupertino California. Because the Apple blogger community has seen a large turnover in recent years I wanted to give new members of the Apple press a chance to read about an exciting Macintosh operating system they may have never seen before.

While Mac OS 9 lacks the protected memory and full pre-emptive multitasking of OS X, lasting improvements include the introduction of an automated Software Update engine and support for multiple users.

Let me take you through the features:

Before Mac OS 9 there were no user accounts in the Macintosh operating system. Everyone logged into the same unnamed identity with no password protection for sensitive files. Users were forced to share the same desktop pattern, control panel settings, application preferences, desktop files, bookmarks, homepage, email address, calendar, and contacts. Starting with Mac OS 9, support for multiple users was added with the ability to log into your Mac using your recorded voice as a VoicePrint password.

Of course there were no file permissions to speak of, so it was not hard to elevate your privileges and gain access to the entire filesystem. The roles of Owner, Normal, Limited, and Panels were merely a facade used to prevent novice users from straying where they didn't belong.

For instance a Normal user had access to the Finder, and all applications on the startup disk. They weren't allowed to install applications or configure a printer, but they could access applications and printers on an external drive or network.

Limited users were constrained to their own portion of the filesystem and a prescribed list of applications. It was easy for them to boot the machine from another startup disk and elevate their user access.

A Panels user had no Finder access. Instead they were greeted with two sets of large buttons, one for allowed applications, and the other for personal documents. The Panels user experience was similar to the iOS Springboard, or the Launchpad application in Mac OS X today.

Keychain, a feature that allows users to save passwords and textual data in a encrypted database, made its first appearance in Mac OS 9. The same proprietary 128-bit encryption algorithm used to make Keychain secure could also be applied files in the Finder. A foreshadowing of Mac OS X's FileVault technology.

Despite these small gains in security Mac OS 9 should not be considered a secure operating system. In the Classic Mac OS applications could write directly to memory, and crashes were common. A single bug could bring down the entire operating system. Compared to Mac OS X, security in Mac OS 9 was an afterthought.

VoicePrint passwords were not the only audio improvement featured in Mac OS 9. A redesigned Sound control panel and support for USB audio were among the heralded features.

Speakable Items 2.0, also known as PlainTalk, featured improved speech synthesis and recognition along with AppleScript integration in OS 9. One of my favorite things to do with the old Macs in my Middle School Library was script them to speak obscenities out loud at random times. With Speakable Items 2.0 in Mac OS 9 curse words were pronounced more accurately, and dialog boxes could be read aloud to the annoyance of your computer lab neighbors.

Although you could not dictate to your Macintosh running Mac OS 9, you could give it simple voice commands prefixed with the computer's name. There was nothing funnier than telling every Mac in the computer lab to shut down with a simple phrase "Computer, SHUT DOWN!. If only Siri could be used to shut off every iPhone in a crowded movie theater.

Mac OS 9's biggest advancement in the area of sound came in the form of iTunes released on January 9th, 2001. The first two versions of Apple's iconic music software working in Mac OS 9 as well as Mac OS X. Users could rip their music from CDs, organize their MP3s into playlists, burn custom discs, watch trippy visualizers, and that was about it. There was no iTunes Store, no video playback, no apps, games, books, ringtones, or iOS. Less than a year later iTunes 2 would support syncing with a little known MP3 player called the iPod.

Burning CDs was not isolated to iTunes. Mac OS 9.1 supported burning data discs straight from the Finder. It could read Unix formatted volumes, and for the first time access files over 2GBs in size. It is hard to think of the Mac as the center of the digital hub without support for disk burning, or the ability to access large media files. It is even harder to think of the Mac as an internet citizen without the networking advancements made in Mac OS 9.

Starting in the mid-nineties the Mac used a stacked set of protocols called Open Transport for networking. Mac OS 9 received an improved version of Open Transport, giving users new ways to connect to the internet. For the first time Mac OS shipped with AirPort wireless networking built-in. Advances were made in dial-up networking, and TCP/IP file sharing was available for the first time. Mac OS 9 could be a web server. It could connect to FTP shares in the Finder. It could share its network connection with other users, or its USB printers with other Macs over TCP/IP.

By identifying changes in network topography Mac OS 9 could set location specific preferences using AppleScript. A user's desktop pattern, speaker volume, energy settings and personal preferences could be changed depending on the Macs location. Mac OS X still lacks location awareness to this day, but at least it can network with PC. Mac OS 9 was too good for Windows file sharing.

One of the most important features from Mac OS 9 is the Software Update control panel. It would automatically download and install Apple system software updates in the background. Prior to Mac OS 9 you had to be a detective if you wanted to keep your system software up-to-date.

Speaking of detectives, Sherlock 2 was such a big feature of Mac OS 9 it was displayed on the box. Sherlock 2 can be broken into eight channels.

The first channel was a file search tool similar to Spotlight on Mac OS X. Users could search for files by name, content, or a long list of custom variables like size, kind, label, creation date, or creator code. Custom searches could be saved for later use.

The remaining seven channels separate Sherlock's "Search Internet" function into specialty areas like Web Search, People, Shopping, or News. The channel type affects the way search results would be presented, and custom channels could be created or downloaded to meet individual inquiries. Sherlock 2 was Apple's take on a dedicated search application before Google Desktop Search ever existed.

iTools was Apple's original collection of Internet services, and the forefather of today's iCloud. Released at Macworld Expo San Francisco on January 5th, 2000, iTools was made available free of charge for all Macintosh users. iTools included the following free services.

iTools was primarily a Mac-only offering that only provided limited, discussion board-based technical support. However, some features of iTools such as email, and homepage editing were accessible via non-Mac platforms after a Mac was used to create an account.

Although the original version of iDisk used AppleShare IP for transport and required Mac OS 9, it was eventually updated to use WebDAV technology and therefore opened up access to non-Mac operating systems. Apple would eventually offer an iDisk application for use with Windows XP.

iTools may not have included any of the fancy personal information syncing services of iCloud, but it gave Macintosh users a place on the web to call their own. To this day I am still proud to use my original @mac.com email address.

In addition to all the new features introduced in Mac OS 9 there are still some old favorites from the classic Macintosh operating system that never made their way into Mac OS X.

Some were interface features like the customizable Apple menu, Control Strip, themeable appearance, Platinum interface sounds, and desktop tabs that could be created by dragging a folder to the edge of the screen. Other were just a different way of doing things like managing your own memory for individual applications, or taking a coffee break when a greedy application hogged all of the available CPU cycles. Mac OS 9 was full of little tricks for getting things done. Like only loading the system extensions you needed to save memory, or avoiding a system restart by trying to force quit an application after it had already crashed. Modern Mac users like to complain about the ubiquitousness of the Dock or brushed metal, but they don't know how good they have it. In Mac OS 9 uptime was measured in hours instead of days, and the most advanced browser was Internet Explorer 5.

Mac OS 9 was an important operating system because it made the transition to Mac OS X easier. Its CarbonLib framework made writing a single application for the classic Mac OS and Mac OS X possible, and its ability to run within Mac OS X as the Classic environment ensured Mac users could continue to use their legacy applications for years to come.

Today's Apple press should not forget Mac OS 9 as the Mac platform embarks on another dramatic shift and continues on the path towards iOS-fication. I hope you enjoyed your exclusive briefing of this truly revolutionary Macintosh operating system.