'Monster' Monsoon Has Submerged Nearly Half Of Pakistan 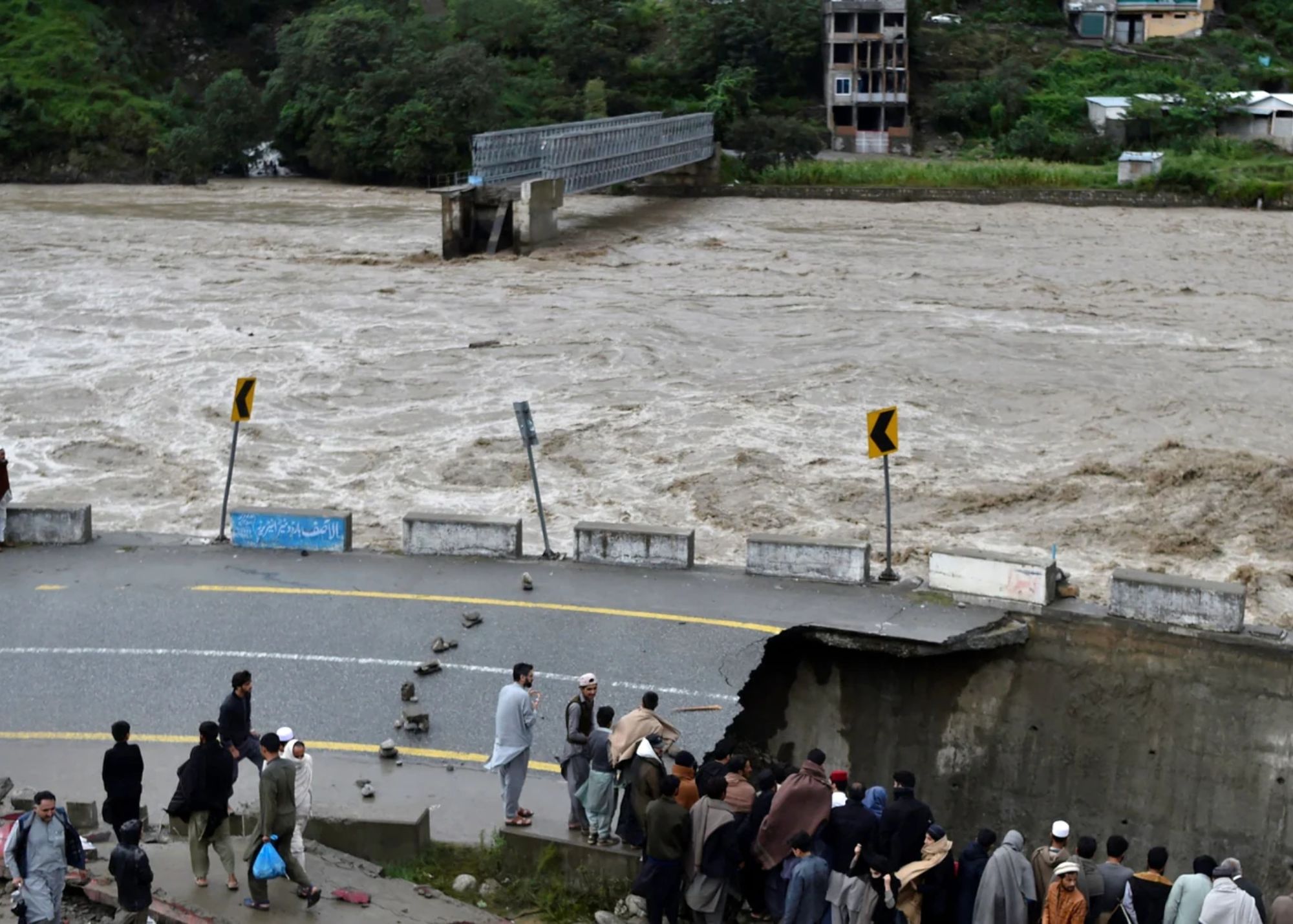 Authorities said on Sunday that a monster monsoon submerged nearly half of Pakistan and more than a thousand people had lost their lives.

According to Pakistan's National Disaster Management Authority, the death toll has reached 1,033, with 348 children accounting for a significant portion of that number.

The weekend alone was responsible for the loss of nearly 100 lives.

The flooding has also resulted in 1,527 people being injured across Pakistan as a result of flood-related accidents.

An official state of emergency has been issued throughout the nation.

The unprecedentedly high number of monsoon rain cycles that have occurred in Pakistan this year has been attributed by experts to the ongoing climate crisis.

Sherry Rehman, the country's minister of climate change, called it a "climate-induced humanitarian disaster of epic proportions" and a "serious climate catastrophe, one of the hardest in the decade."

It is beyond the capacity of any one administration or government to rehabilitate and even manage the rescue and relief. We need all the help we can get.

On Saturday, officials from disaster management reported that the average rainfall this year has been nearly three times higher than the national average for the past 30 years.

It was pointed out that the amount of rain that had fallen in the Sindh province of Pakistan had been five times the typical amount.

Thousands of people have been forced out of their homes, and millions more have had their access to electricity cut off.

The National Disaster Management Authority of Pakistan reported that nearly 500,000 people were living in homes that had been damaged by the floodwaters.

More than 500,000 people have been moved to emergency shelters and relief camps across the entirety of Pakistan as of this moment.

Images show the damage that the floodwaters have done all over the country and they are heartbreaking to see. 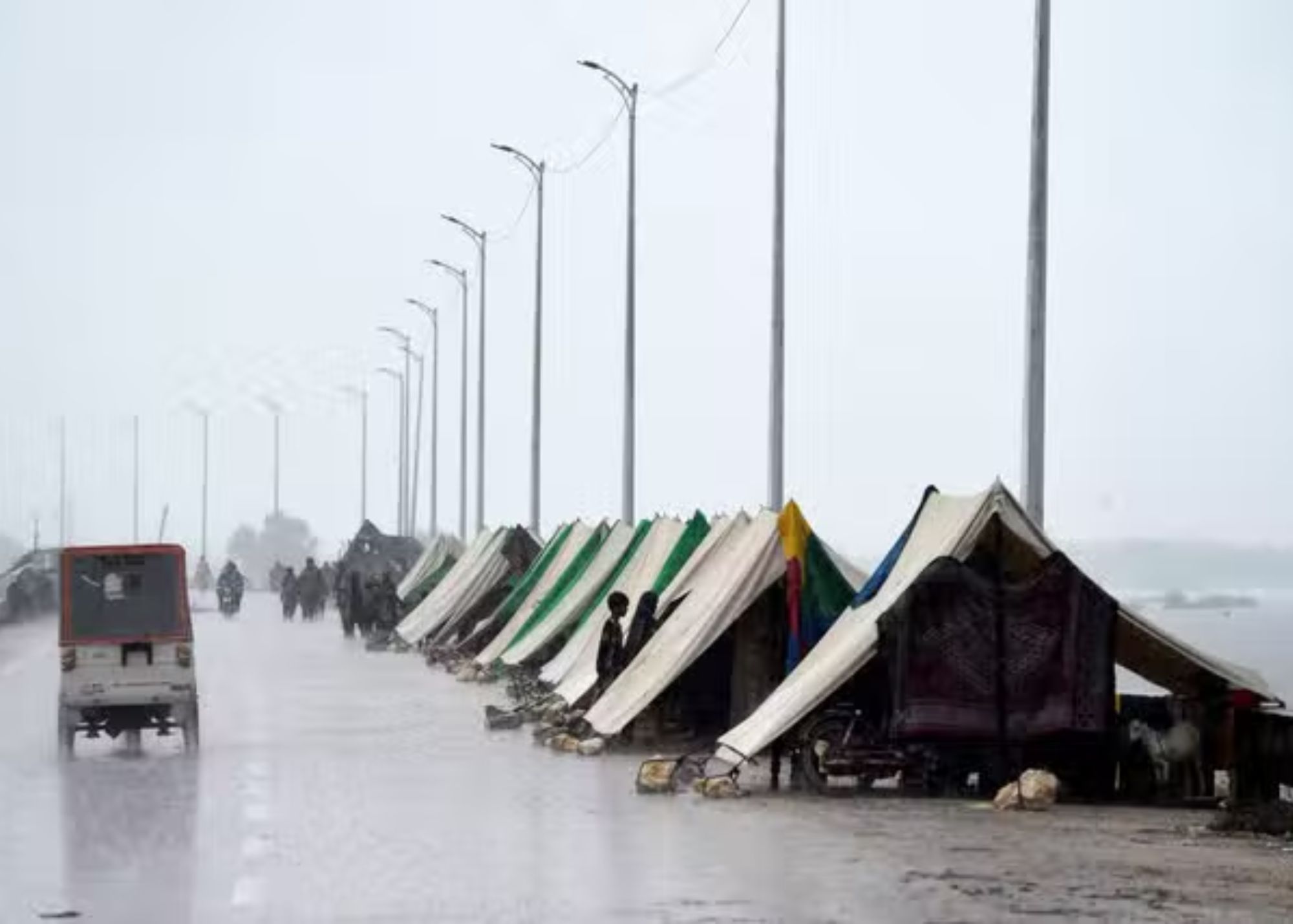 In Sukkur, Sindh province, an auto-rickshaw drives by temporary tents set up by people who had to leave their homes because of flooding

Mr. Sharif and Army Chief General Qamar Bajwa went to parts of Balochistan and Sindh provinces that were hit by floods.

Local officials in the northwest Pakistani province of Khyber Pakhtunkhwa said that about 350,000 people were moved out of the most flood-prone districts of Nowshera and Charsadda.

In addition, at least 14 people lost their lives as a result of flood-related incidents in Lower Dir, Mansehra, and Kohistan.

The two leaders promised that they would try to help everyone who had been hurt by the floodwaters or had to move because of the disaster.

Mr. Sharif stated that relief grants would be provided to all of the provinces in the country that were impacted.

The sum of 38 billion dollars has already been made available by the federal government, and the local residents will be looking for relief goods as soon as they can.

The magnitude of the calamity is bigger than estimated. Times demand that we come together as one nation to support our people facing this calamity. Let us rise above our differences & stand by our people who need us today.

Villages and crops were lost as a result of the monster monsoon that flooded nearly half of Pakistan Flash.

After heavy rains caused widespread flooding in Pakistan, soldiers and rescue workers helped move people to dry land and feed the thousands who had to leave their homes.

The Lahore–Karachi line of Pakistan Railways will be out of service until August 31.

Officials have said that services should start up again on September 1, but this date could change depending on how quickly maintenance is done and how the weather is.