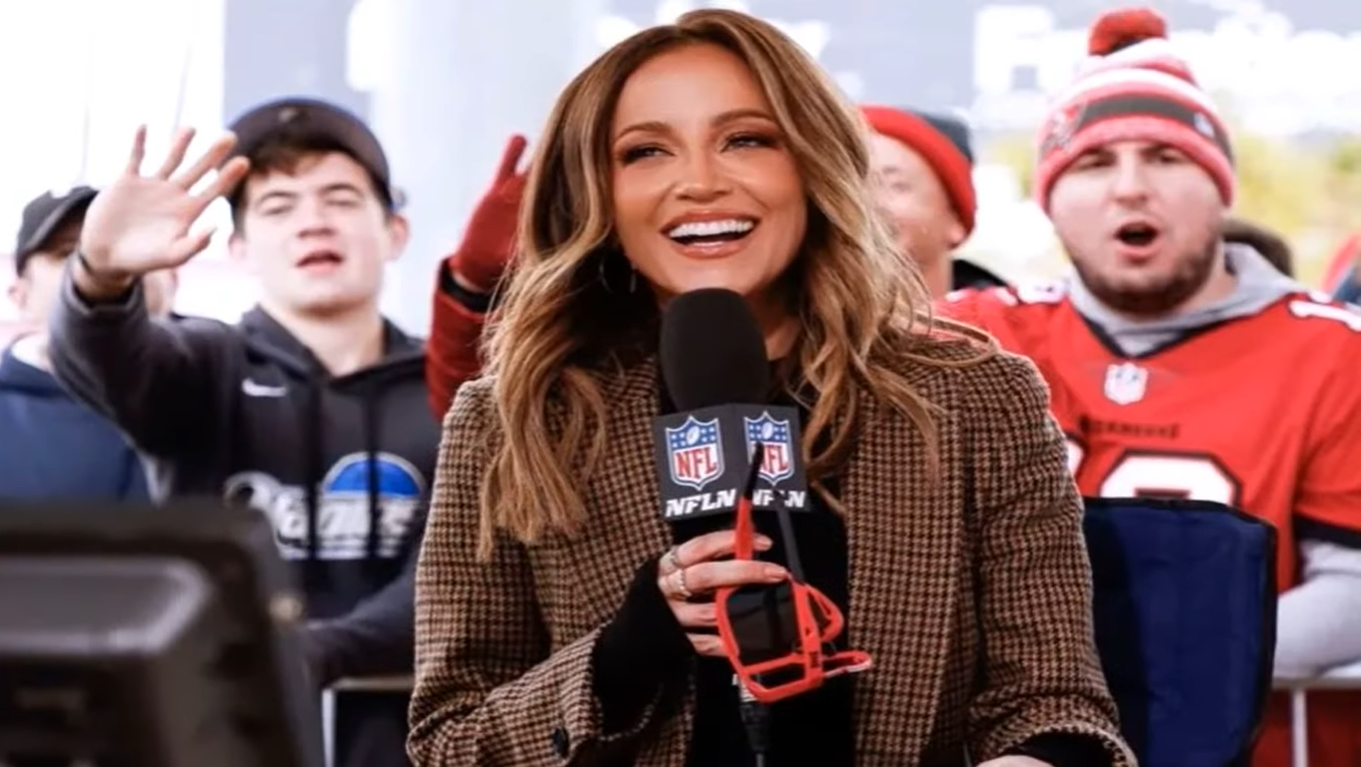 American football fans must be familiar with Kay Adams.

How can they not be when she’s one of the faces - and a gorgeous face at that one - of the National Football League (NFL)?

Before her jump to the NFL camp, Adams updated supporters of fantasy football at Fantasy Football Live on NBC Sports. She did the same thing at DIRECTV’s Fantasy Zone.

Adams made headlines in May 2022 when news broke out that she would be leaving Good Morning Football. As an NFL Network staple, that proved to be shocking news, particularly for fans.

People started talking about not only who would replace her but as well as what TV show she would be seen next.

Kay Adams had been through a lot in life, and the latest hurdle in her career only opened new doors to this talented and charming TV personality.

She’s the youngest child of Czesio Konopka. Most sites couldn’t give her mother’s name. However, one site (Kidadl.com) identified her as “Cathie.”

The brother, a lawyer (law firm as of September 2022: Heyl Royster), is married to Amanda. They live in Chicago and have a child named Maya (born June 2016).

First, she described to Eisenband how her parents, Polish immigrants, practiced a “crazy work ethic.”

They inculcated in her at a young age the value of hard work.

For example, given the family’s financial standing, Kay Adams was made to realize that she should study hard to qualify for a scholarship.

It’s the only way she could go to school.

She didn’t become an activist like Moore, but she ended up being an active student.

Even an impressively creative one, as reflected from her co-curricular activities. Once, she made a modern interpretation of the Shakespeare classic Romeo and Juliet.

The Media Dream And The Early Grind

Kay Adams admitted in the interview that her experiences in high school made her want to pursue a career in media.

She initially thought of working for “entertainment news.”

Before she graduated, however, she had a change of heart, telling Eisenband:

I got . . . to thinking what the daily grind of that would look like, sizing up the Kardashians all day every day, and it didn’t seem meaningful to me.

When it’s time to go to college, Adams had no options but to be a working student to pay for her matriculation at the University of Missouri in Columbia.

She applied at Willie’s Pub & Pool, a sports bar in East Broadway - just a block away from the university.

Kay Adams got accepted as a bartender, taking the happy hour shift from 3 p.m. to 8 p.m.

Even though Kay Adams veered away from being a probable Hollywood reporter or TV host, she still set her eyes on the entertainment industry.

As she told Jeff Eisenband during the interview:

And before that Kay Adams become the celebrated sports newscaster that she is today, she had a string of jobs, including the following:

As for her other hosting roles such as in the field of sports, see the table below:

Before Kay Adams found herself at the NFL Network in 2016, she was busy back at the NBC Sports Network.

She appeared at NBC Sports Talk and The Crossover with Michelle Beadle as a guest host.

At the time (April 2018) The Spun published an article about Adams, it mentioned there that she worked at Extra, a 2022 Emmy-nominated entertainment news program.

Kay Adams is also part of The Harry Walker Agency, a New York-based talent agency. It signed her up for its speakers bureau.

She also accepts endorsements from time to time.

Adams did one for Olay in 2019 and with Smirnoff this 2022. The British vodka company got her and former NFL tight end Vernon Davis as endorsers. 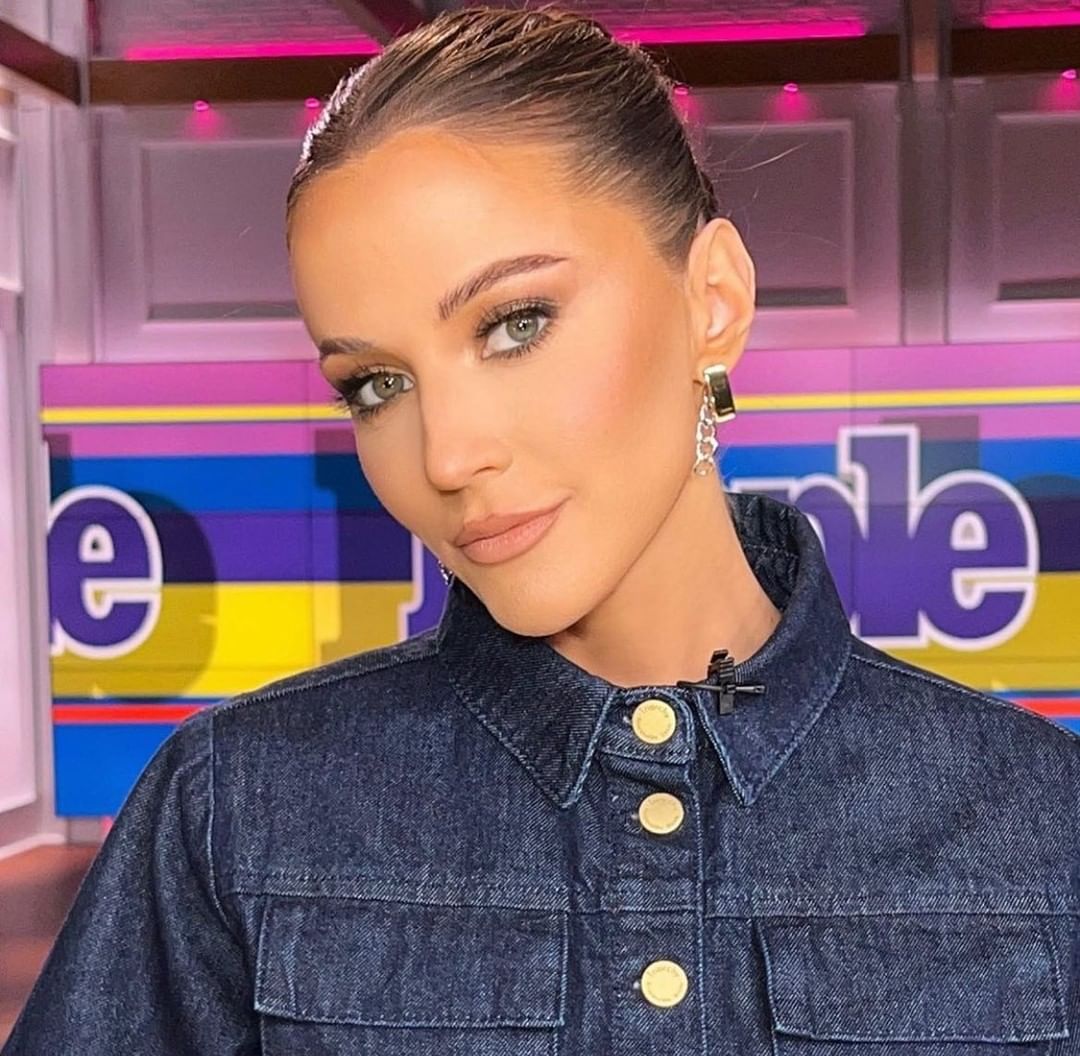 Kay Adams, hair neatly pulled from the back and in denim jacket, with ‘People’ sign partly covered behind her

It was thew NFL Network that gave Kay Adams her big break when it hired her to co-host Good Morning Football in 2016, a role she competently handled.

As The Spun mentioned in an article published in April 2018, where she was described as a “fantasy football expert:”

Today’s era of sports talk shows constantly consists of hot takes, whereas Adams does her best to stay calm and collected.

In January 2022, she guested for the first time in The Pat McAfee Show.

The host praised Adams for her reliable predictions of game outcomes. At the same time, he is intrigued how she “seem(s) to know more than everybody else.”

Patrick “Pat” Justin McAfee, a former NFL player (retired: February 2017) and now football analyst, asked whether she gets “inside information” or is just plain “football whiz.”

Kay Adams replied by saying that she believed the more apt term would be “osmosis” and not “whiz.” Also, she wouldn’t “say ‘insider’s.’”

She explained how she was “so ingrained” in football. She would talk about it at length (average of three hours in her show) and would spend a long time asking around to gather info.

All these, she said, contributed to her forecasts. Plus, she added in the end, she trusts her “gut a lot.” 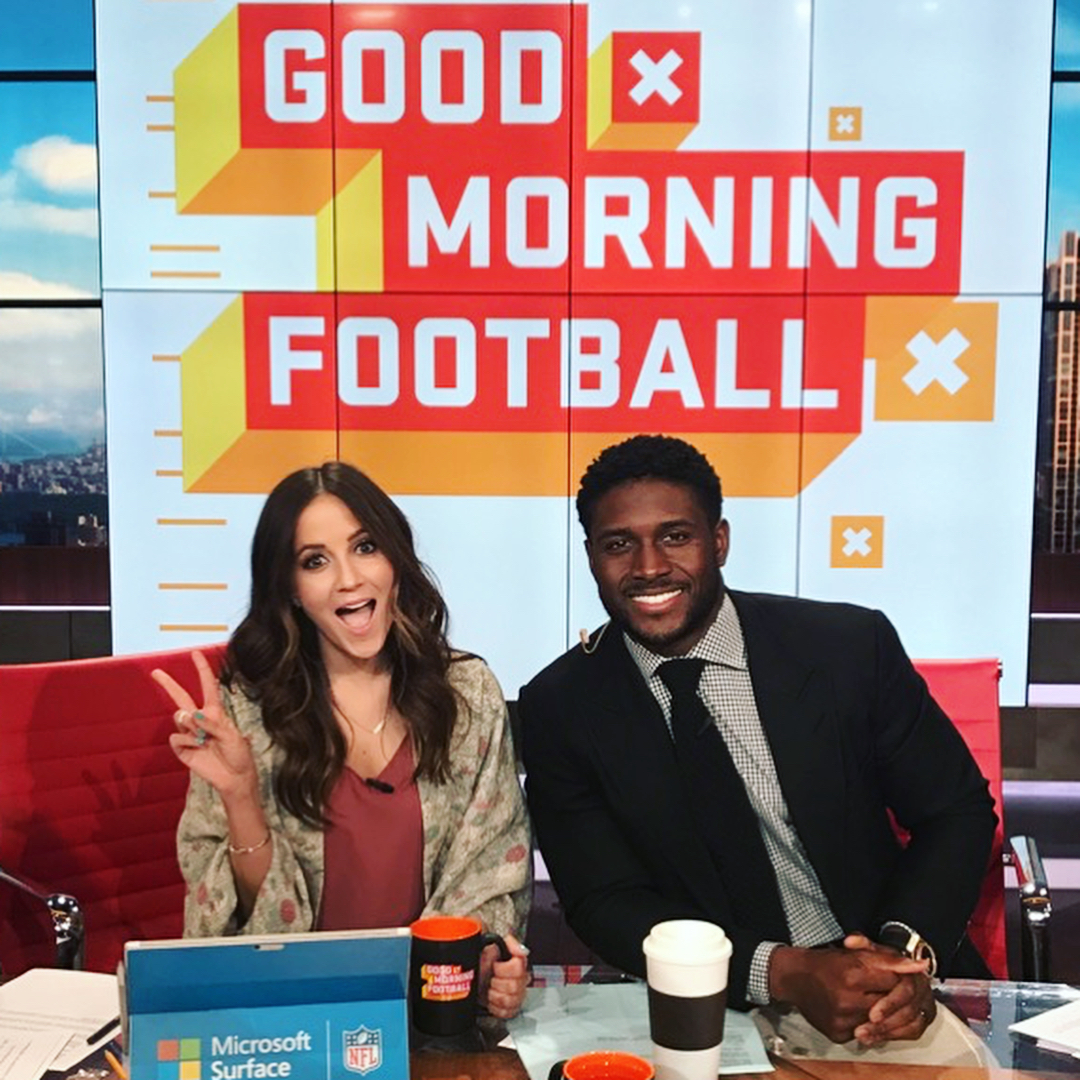 Where Is Kay Adams Going To?

After learning about her free agent status, McAfee asked if she would take the celebrity route or still pursue the NFL path.

Though she didn’t mention a specific job, she said:

I want the big jobs. I want to go to the top of the NFL, are you kidding? I like to be part of the game day experience.

In his May 2022 guest appearance at the daily sports radio show The Rich Eisen Show, NFL Network analyst Steve Mariucci described her as “so talented.”

An American cable and TV network noticed that talent.

On September 6, via a press release, FanDuel TV (the former TVG Network) announced that Kay Adams would be hosting Up and Adams.

FanDuel’s Chief Commercial Officer Mike Raffensperger stated why they got her:

Kay has a certain electric energy about her and her approachable presence creates an authentic connection with her fans that is rooted in trust.

A daily morning 1-hour show, Up and Adams will be telecast live from Los Angeles. People can watch it from various social media platforms, including YouTube.

Several websites mentioned that as of 2022, the estimated net worth of Kay Adams is $1 million.

According to Briefly and some other sites, her annual salary at Good Morning Football was approximately $70,000. Other sites gave a higher estimate at $80,000 per annum.

Kay Adams never got married; so, she didn’t have a husband. The lovely host, however, had some athletes as boyfriends.

Her past dating relationships included these two (in alphabetical order):

In July 2022, when Uzomah guested at the podcast Bussin' with the Boys, ex-football linebacker Will Compton asked him to clarify the rumors.

Uzomah denied that he and Kay Adams were dating. 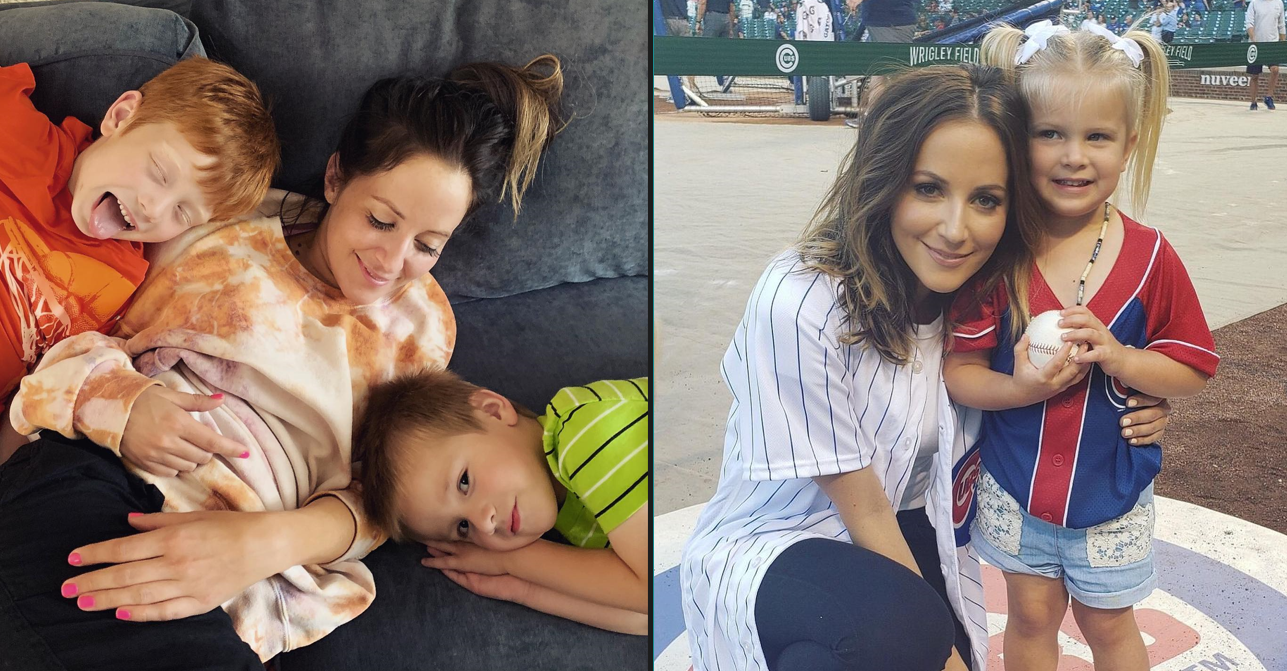 Kay Adams on the couch with her two nephews; with her niece Maya at the Chicago Cubs baseball field

First, Kay Adams belonged to the first generation in the Konopka Family to receive a college diploma. Her parents emigrated to the U.S. in the 1970s and settled in Chicago.

That’s according to the Missouri-based law firm Dowd & Dowd, where her older brother was formerly part.

“Kay Adams” is only a stage name.

Third, her interest in sports was courtesy of her older brother, Adam.

Kay Adams also calls him “Adamski.” That’s how he addressed him when she congratulated him through Twitter in November 2013 for passing the bar.

That explains why several sites erroneously identified her brother as “Adamski Adams” (his real name is Adam C. Konopka).

Fourth, back in college, Kay Adams first enrolled in Journalism before she shifted to Communications.

As she said in her 2019 Front Office Sports interview:

I quickly found out I didn’t want to do hardcore journalism. I was more interested in some more editorial things.

Fifth, in October 2012, Kay Adams made her TV debut via The Late Late Show With Craig Ferguson. This guest stint contributed to her career advancement.

According to the New York Post, her contract with the NFL Network expired, and she was quoted saying:

I didn’t want to renew because I just wanted to try something different.

Who Is Replacing Kay Adams On Good Morning Football?

Does Kay Adams Have A New Job Yet?

She now hosts FanDuel TV’s Up and Adams (Monday through Friday, 11 a.m. ET).

Kay Adams navigates the male-dominated sports industry armed with diligence and expertise, not to mention, grace and charm.

As she recalled during the early days of her career during her interview with Jeff Eisenband:

I’d be knocking on the St. Louis Cardinals’ door until they hired me.

Now she’s the one counting the many doors that opened themselves up for her. Kay Adams proves that hard work really goes a long way.